Luang Prabang is the heart of Laos and the heart of Lao Buddhism. It has been listed as a UNESCO heritage site in 1995 for its unique and well preserved architecture, with many French colonial influences, and for its religious and cultural heritage. With its more than 34 temples, it is not surprising that life in Luang Prabang revolves around Buddhism, where one of the biggest monk communities is installed.

In most of the temples of Luang Prabang monks still live and pray here. But, tourists and travellers are welcome to visit the temples. With this in mind, everyone should be respectful and keep in mind some basic rules, such as dressing appropriately (keeping shoulders and knees covered) and removing shoes and hats at the entrance. If needed, a traditional sarong can be rented to cover up.

These are some of the temples that we visited in Luang Prabang, and that you should try to visit if you stay in the city for a couple of days. Each temple has its own charm and history. But, more important, its own novices and monks who are happy to share their experience with anyone who cares to listen. 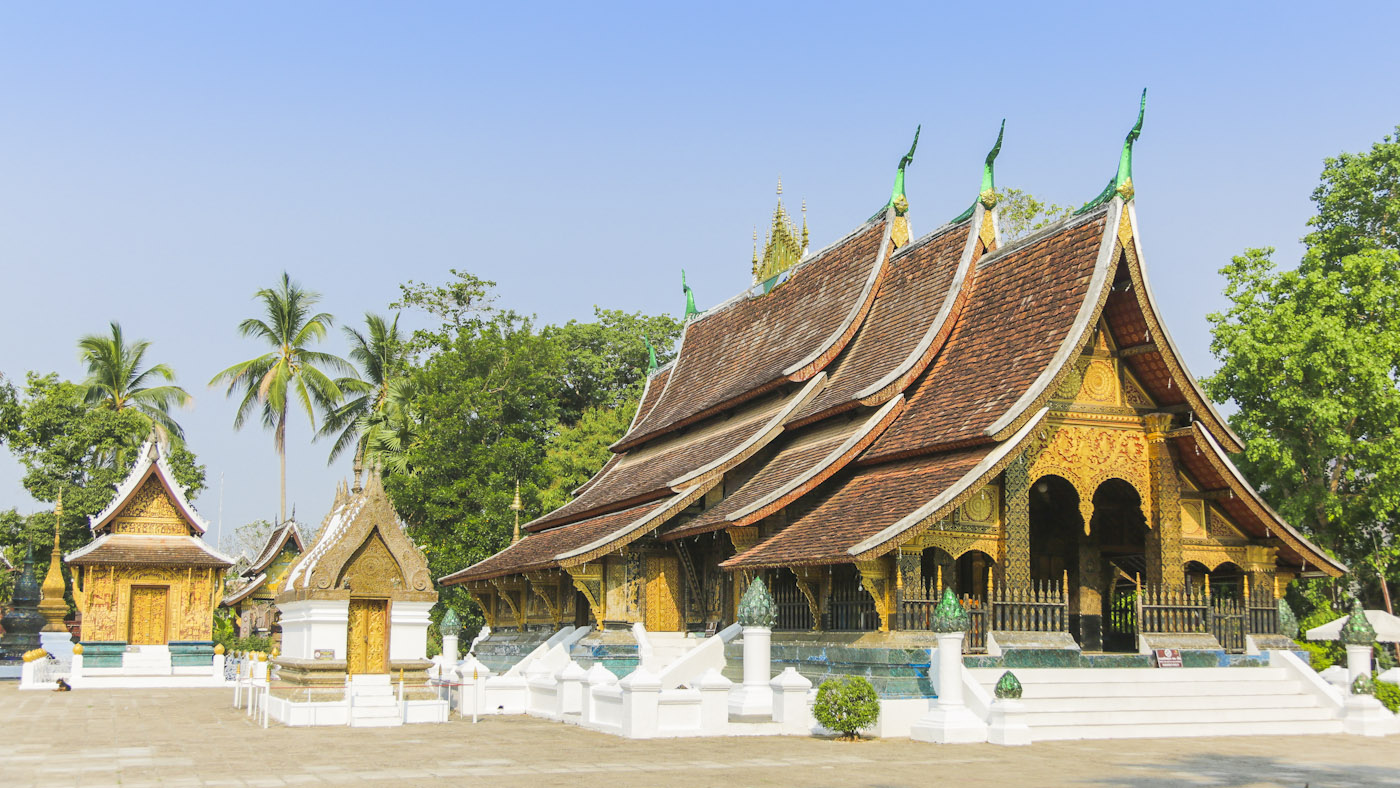 Vat Xieng Thong soon became our favourite temple complex, because of the fine details of its golden facades not only on the congregation hall (the main hall, in Lao called Sim) but also on the other buildings. The outside rear wall of the Sim depicts a beautiful four metre high tree of life mural. The Royal Funerary Chariot Hall is one of the most impressive buildings inside the Wat Xieng Thong temple complex, because of the fine details of its golden facade. This structure is more recent than the congregation hall and contains the funeral carriage of King Sisavang Vong. We liked coming here for the afternoon chanting inside the Sim. Both the Sim’s exterior and interior are very extensively decorated with intricate gold stencilling on black lacquer.

Entrance fee: 20,000 kip
Location: At the end of the peninsula, between Khem Khong road and Sakkaline road 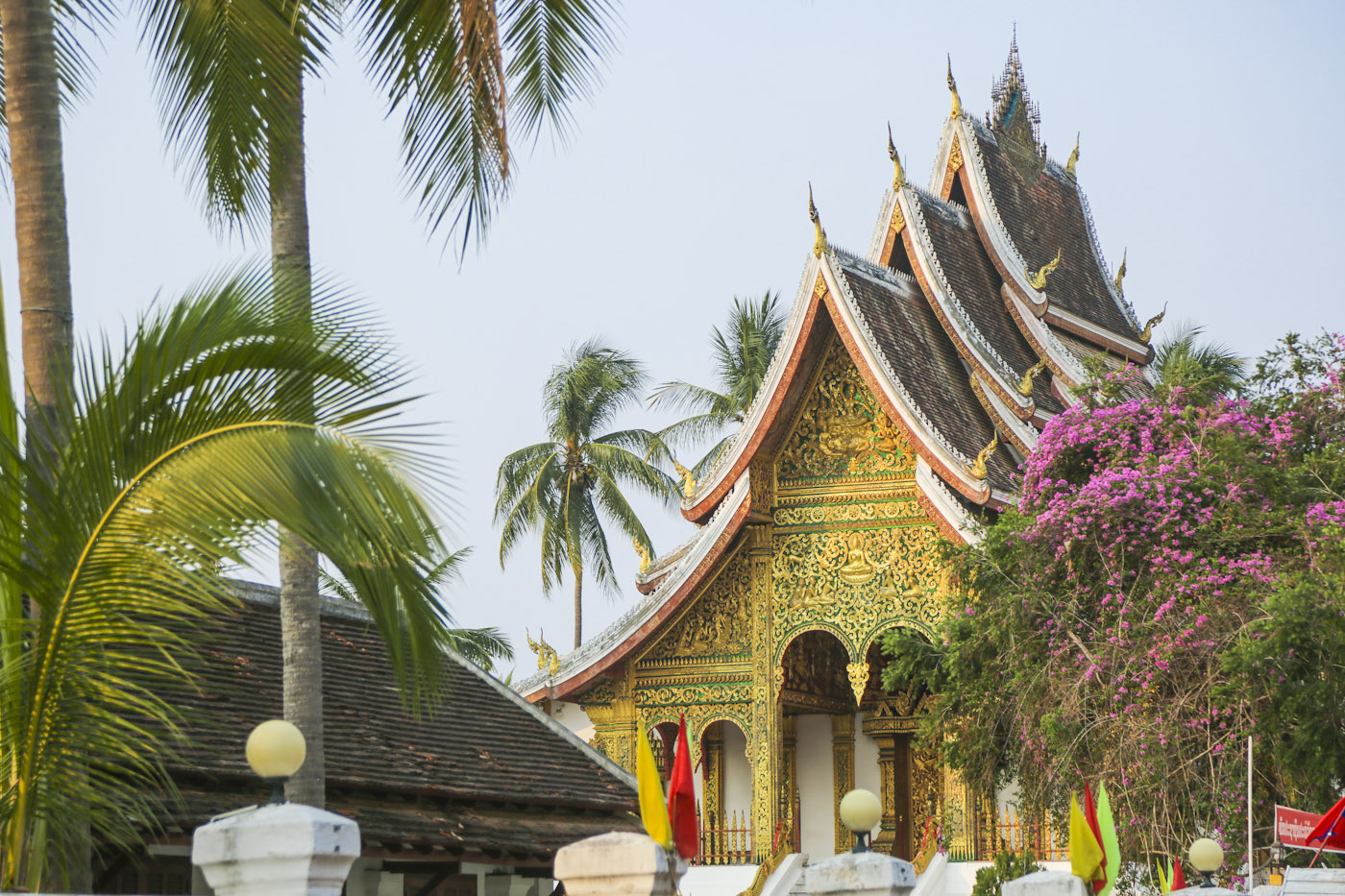 Haw Pha Bang is Luang Prabang’s most respectful and attractive landmark. At the centre of the roof there is a “Dok so faa”, an ornamental element consisting of 17 spires, found on many Laos temples. It was built to house the statue of Phra Bang, the most sacred Buddha image in the country (dated from 1512), and which gives the name to the city. Pha Bang is the palladium of Laos. During Pi Mai, the Lao New year, the Phra Bang is taken from Haw Pha Bang to Vat Mai during a procession. There the Buddha image is bathed by monks and devotees with perfumed water and this water is then taken home to purify the family.

Entrance fee: 30,000 includes also the entrance fee to the Museum
Location: Inside the Royal Palace complex, on Sisavangvong road

3. Vat May Souvannapoumaram (also known as the New Monastery) 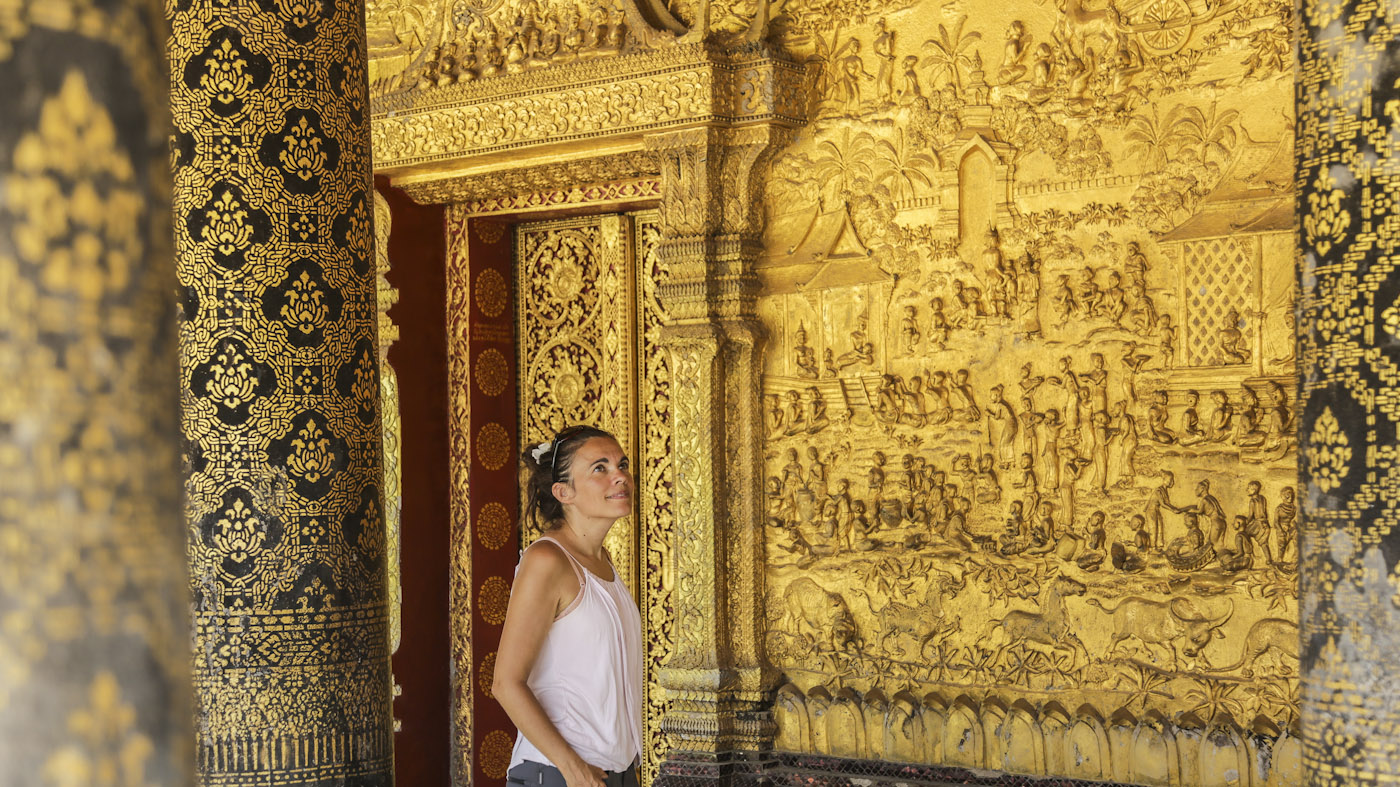 Lao have a tendency to give very long names to their Buddhist temples. Afterwards they call them by a short version. Vat May Souvannapoumaram is often just referred to by locals as Vat Mai. The front patio has beautiful columns in gold stencilling on black lacquer, and  gorgeous golden murals that depict the scenes from the life of Buddha. It was here that lived the head of the Lao Buddhist faith (the Phra Sangharat) at the end of the 19th century, therefore this is an important temple for Lao Buddhism. It is also one of the biggest temple complexes of Luang Prabang. At the time of its construction, it was the temple used by the Laos royal family and it survived the destruction by Chinese invaders in 1887.

Entrance fee: 10,000 Kip
Location: On the Sisavangvong road next to Vat Haw Pha Bang, on the night market street 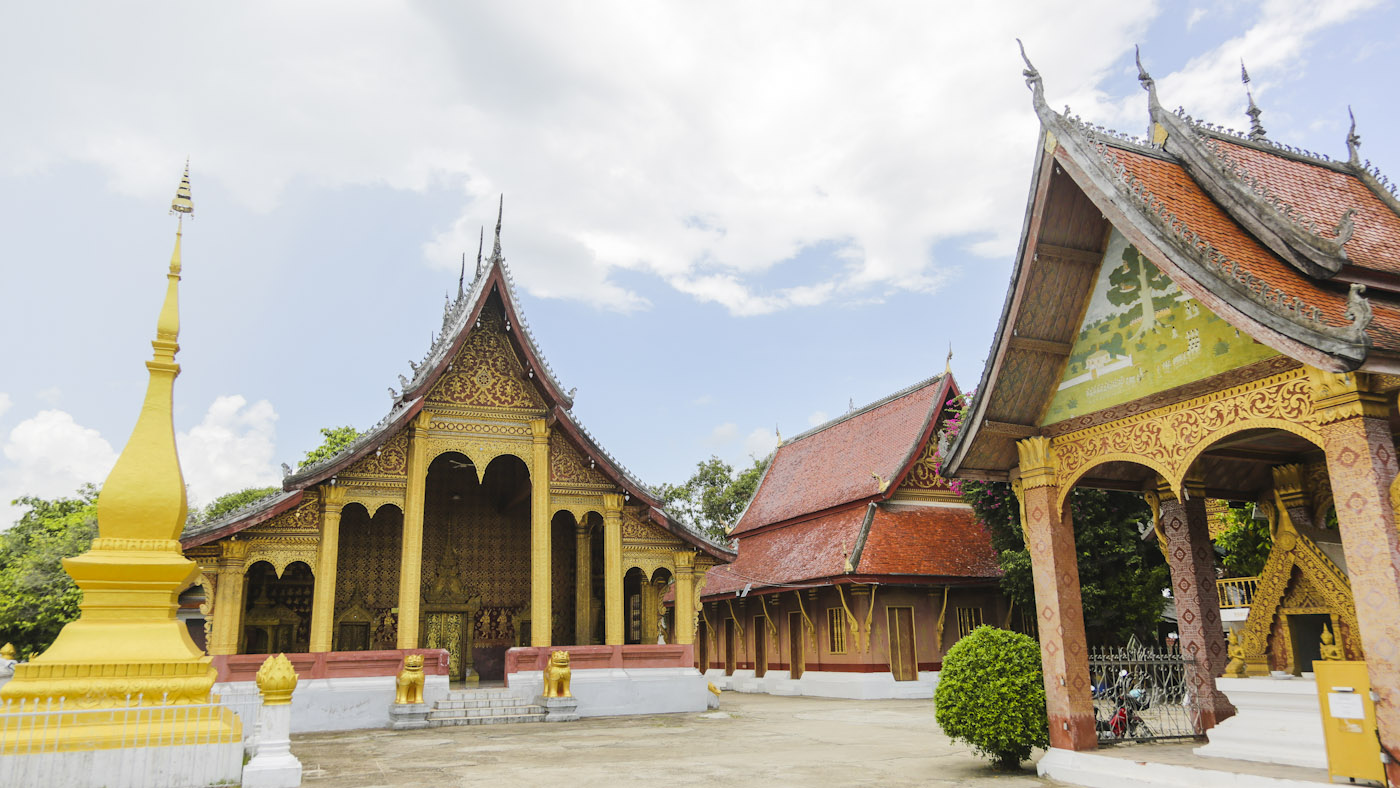 Sensoukaram is another lovely temple, beautifully decorated with golden leaves. Its name ‘Sensoukharam’ means 100,000 treasures, and there are several legends around this meaning. Some say that the temple got this name because it was constructed with 100,000 stones from the Mekong river. Others say that it takes that name because it required 100,000 kip for its construction back in 1718. 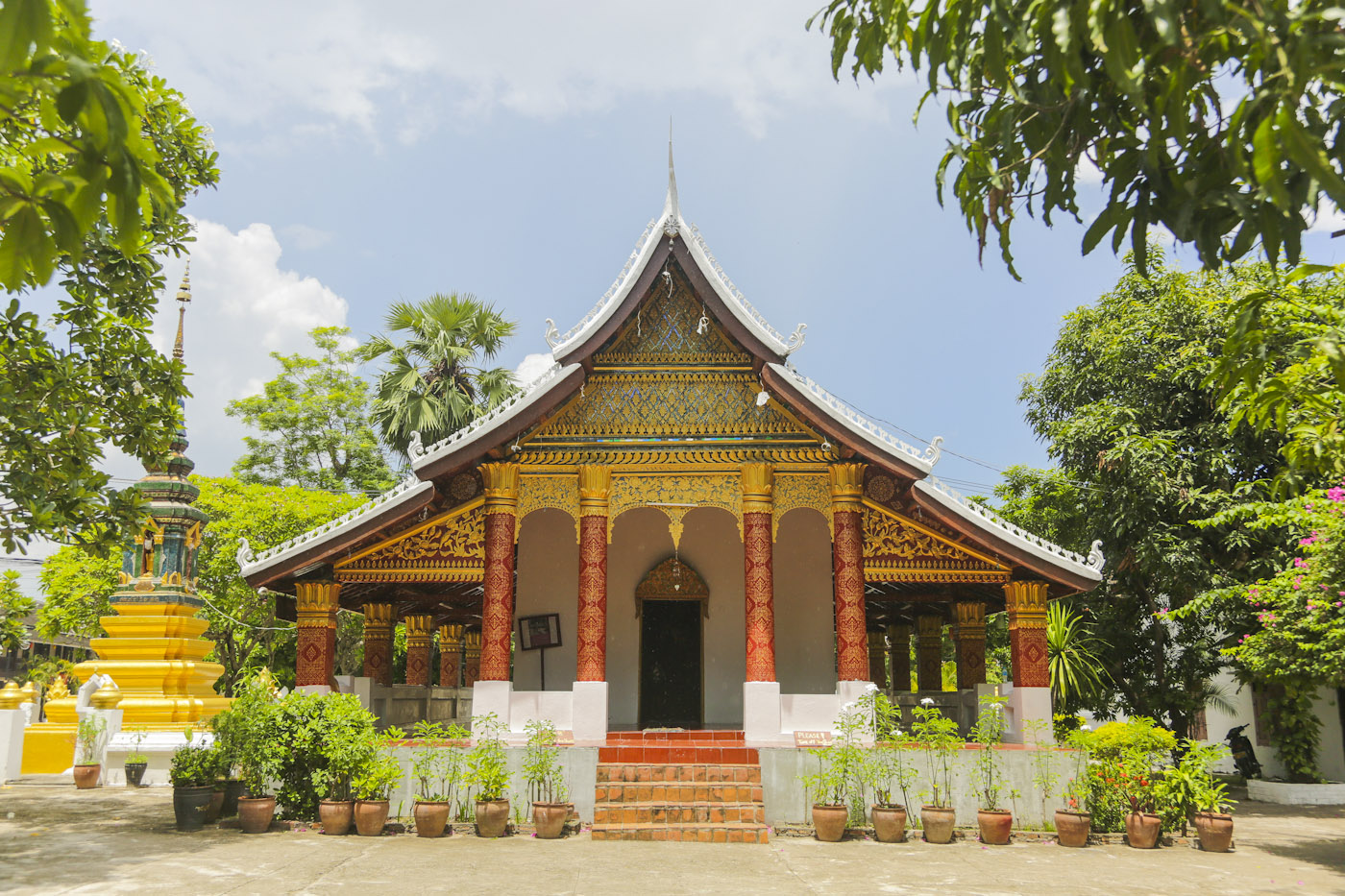 The deeper you get into the peninsula, along the Sakkaline road, the more temples you will get to see. After Vat Sensoukharam, there is a chain of temples, almost connected to each other. They are all so nearby that in the beginning, we thought it was all one big temple complex. The second time we passed-by, we realised that each was well signed with a different name. Enter each of them to find your favourite, and to get lost in their yards. 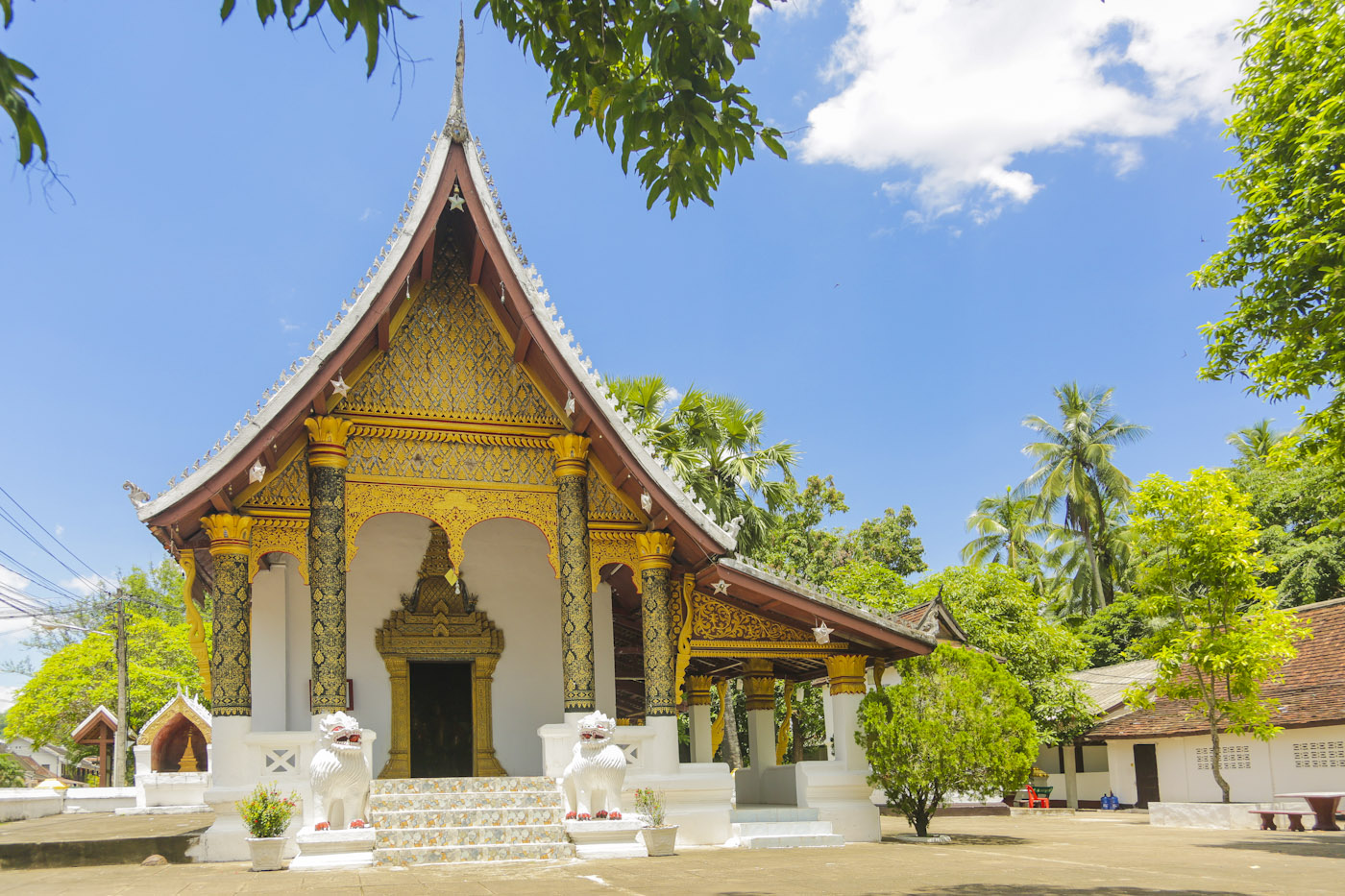 Easily recognisable because of the two white statues representing two lions (or tigers, or dragon!) outside, this complex temple has a smaller sim but compensates with a big yard where one often gets to spot young novice monks studying below the shade of the frangipanis… This peaceful image is better than any lesson about meditation. As in the other temples, the resident monks live in the kutis, which are the monks’ living quarters. Don’t forget to check the boat house that stores a long racing boat used during the Luang Prabang boat racing festival. 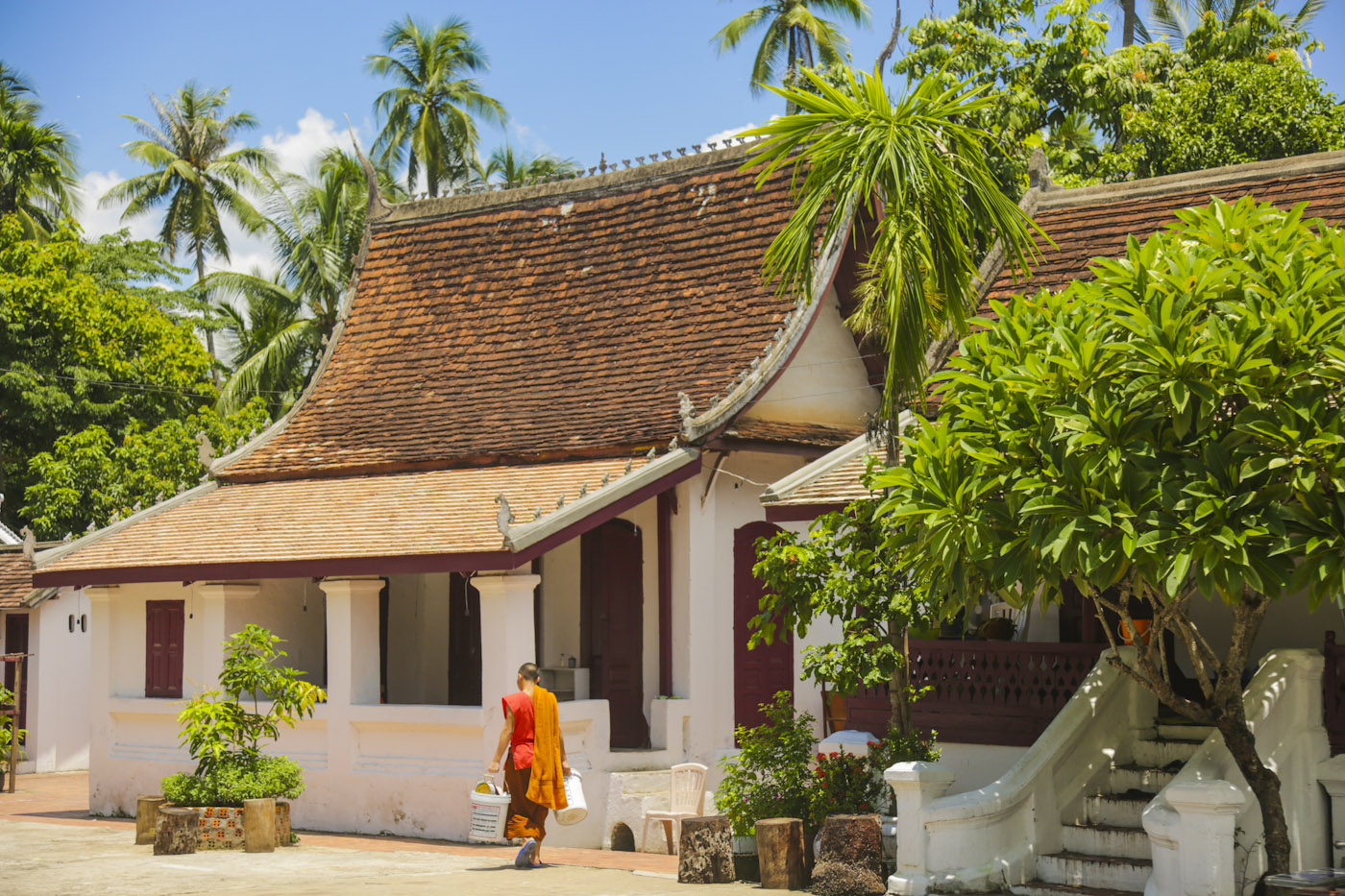 Another quiet temple where you are welcome to come in, visit the temple and have friendly chats with the monks. You can also choose to watch the quiet life of the temple while having a coffee and a baguette from the terrace of Le Banneton, a French bakery, where having breakfast after witnessing the Almsgiving ceremony has a special taste… 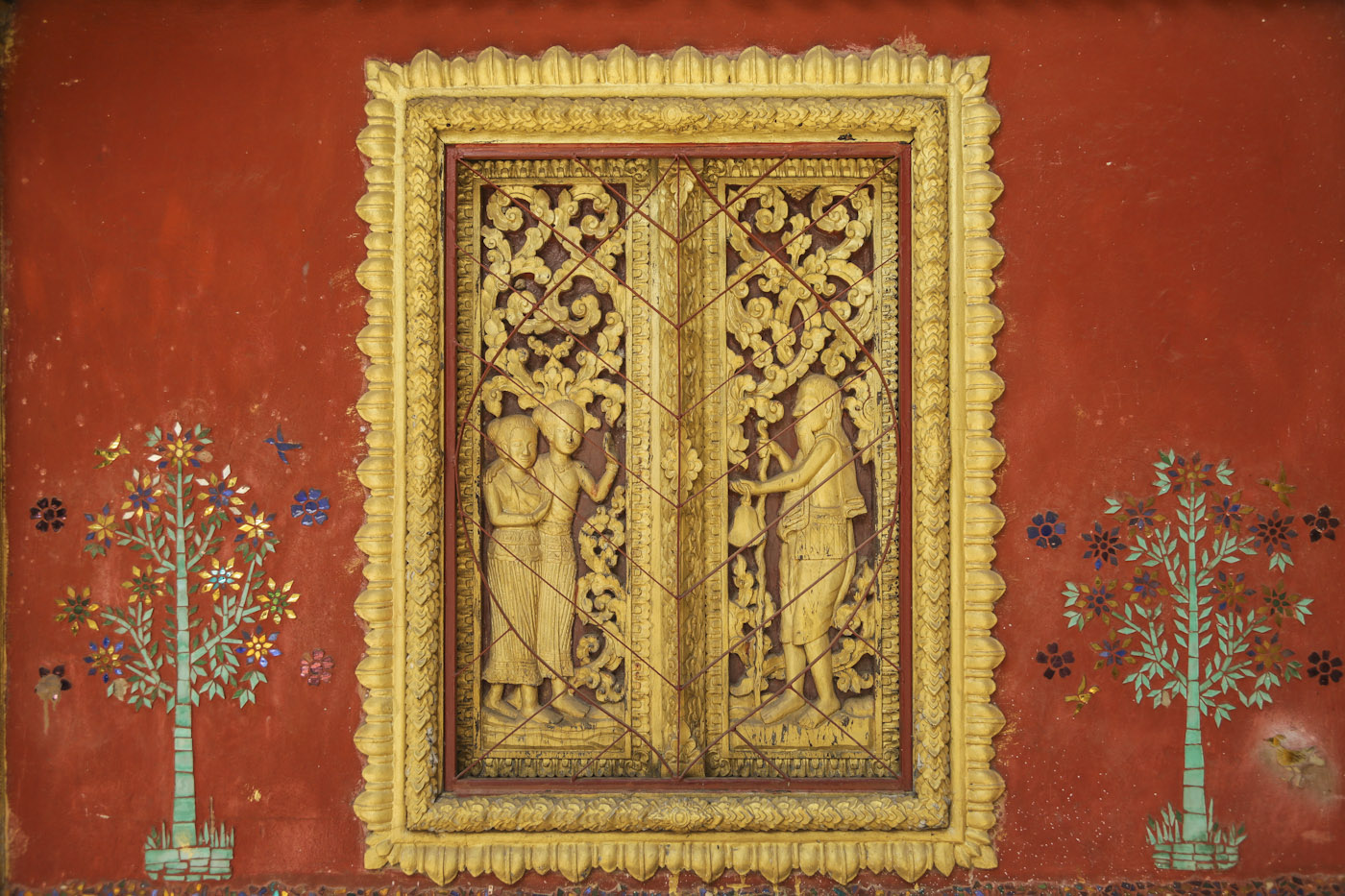 After leaving Vat Sibounheuang, continuing to go down the peninsula, but now on the right side of the road, there is the lovely Vat Souvannakhiri. This one is a bit different from the other temples in the same street. It is used as a centre for meditation, with a museum about the history of meditation. The building itself is more in the colonial style than in the Lao or Luang Prabang architectural style. It is worth the detour to learn more about meditation and to find out which temples are offering meditation classes for foreigners.

Entrance fee: Free entrance
Location: On the other side of the Sakkaline road, opposite Vat Sibounheuang

9. Vat Pak Khan Khammungkhun (also known as the Temple at the Mouth of the Khan river) 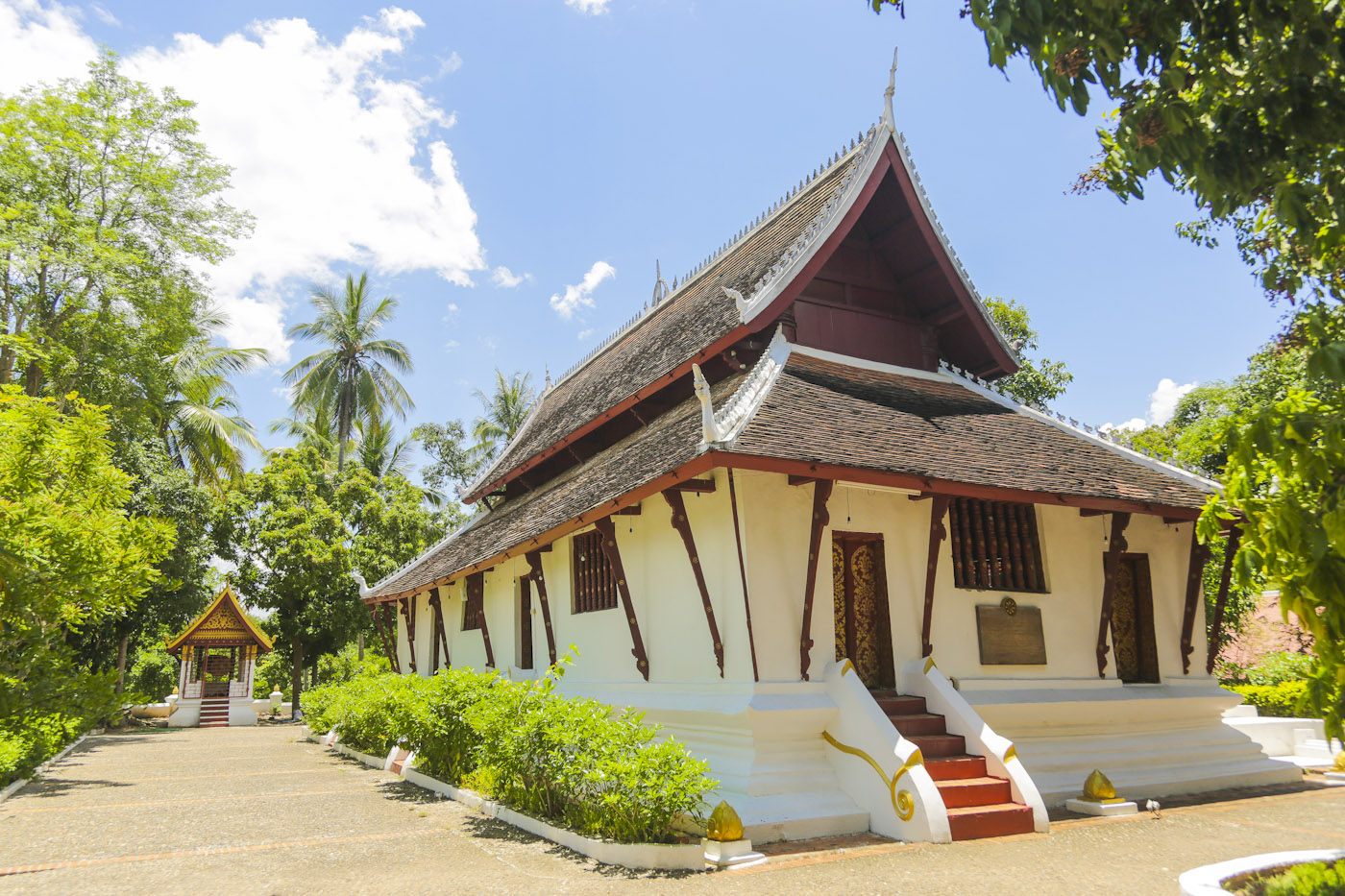 This small temple is located at the end of the peninsula, opposite the much visited Vat Xieng Thong, but opposite to this one, it receives few visitors. It gets its name because of its location, next to the confluence of the Nam Khan River with the Mekong. It is one of the most charming temples in the old peninsula, because it has never been renovated and is very well preserved in its original state, with shabby walls and cracked wood. 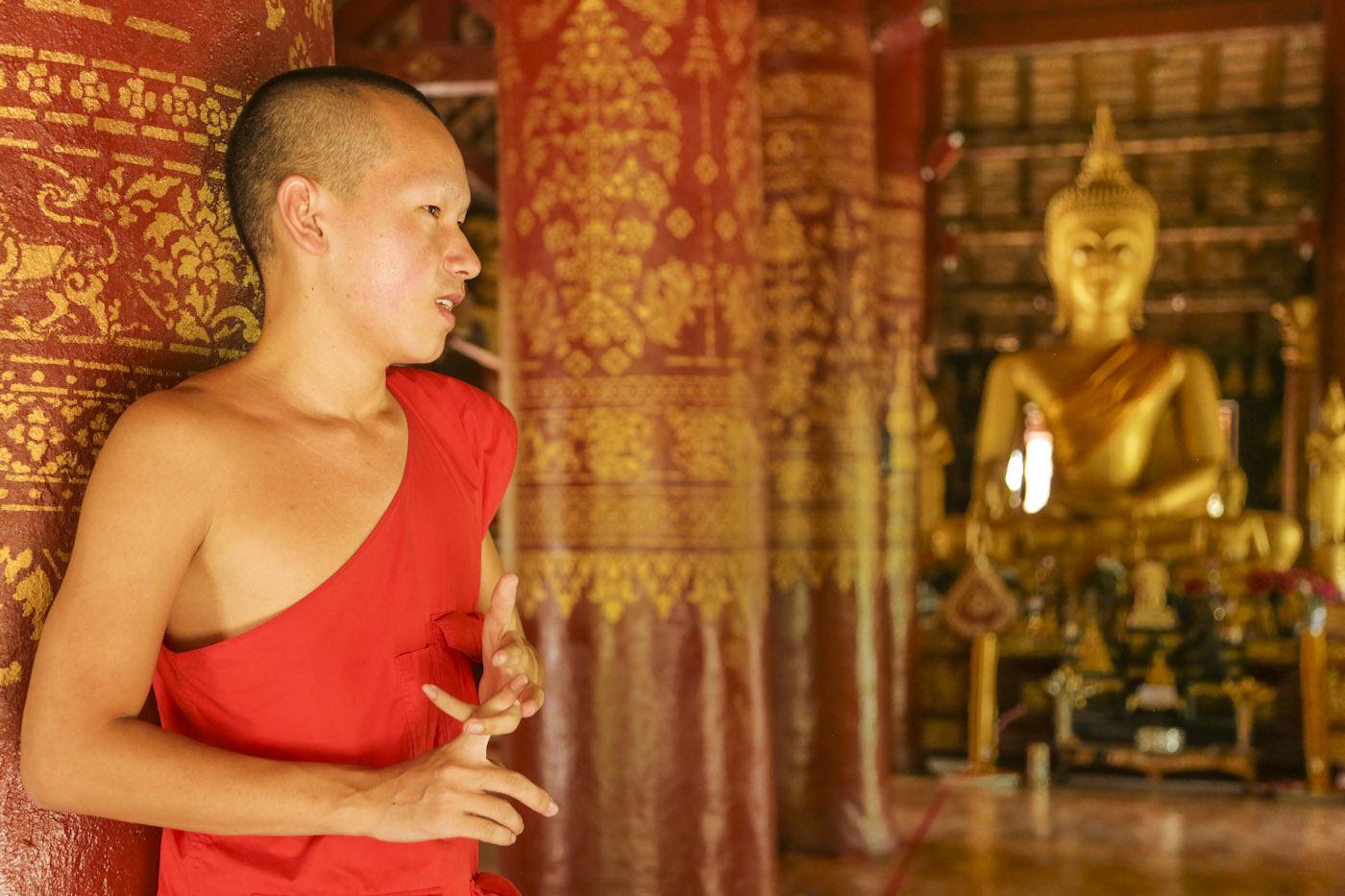 There are many monks and novice monks living in this temple and they look forward to practicing their English, therefore we recommend you come with time and ready to exchange with the monks. It is a lovely experience, in which both parties win. We got to learn about the monks daily routine and celebrations while they got to know about us and our countries of origin, while we all got to practice English…

Entrance fee: Free entrance
Location: At the end of the peninsula, opposite one of the lateral entrances to Vat Xieng Thong 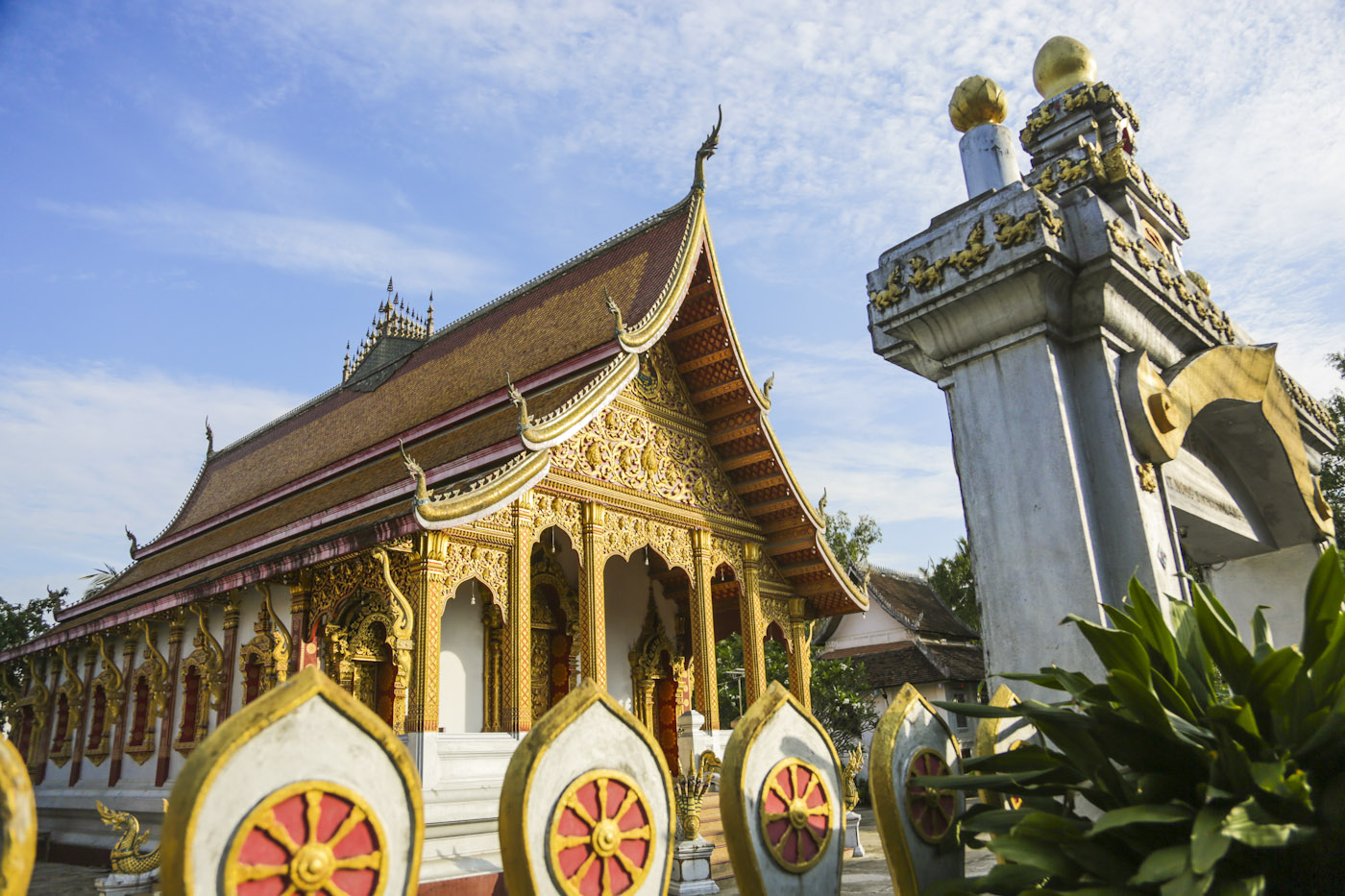 This temple is located in one of the quietest streets of the peninsula, in a tiny if long road between the Sakkaline and the Khem Khong road along the Mekong river. It is probably easier to remember that the Vat Nong Sikhounmuang is opposite the Elephant restaurant. Even though located in a secondary street, this is one of the prettiest temples we saw and the roof inside is beautifully coloured.

Entrance fee: Free entrance
Location: On the Kounxoua road, opposite the Elephant restaurant 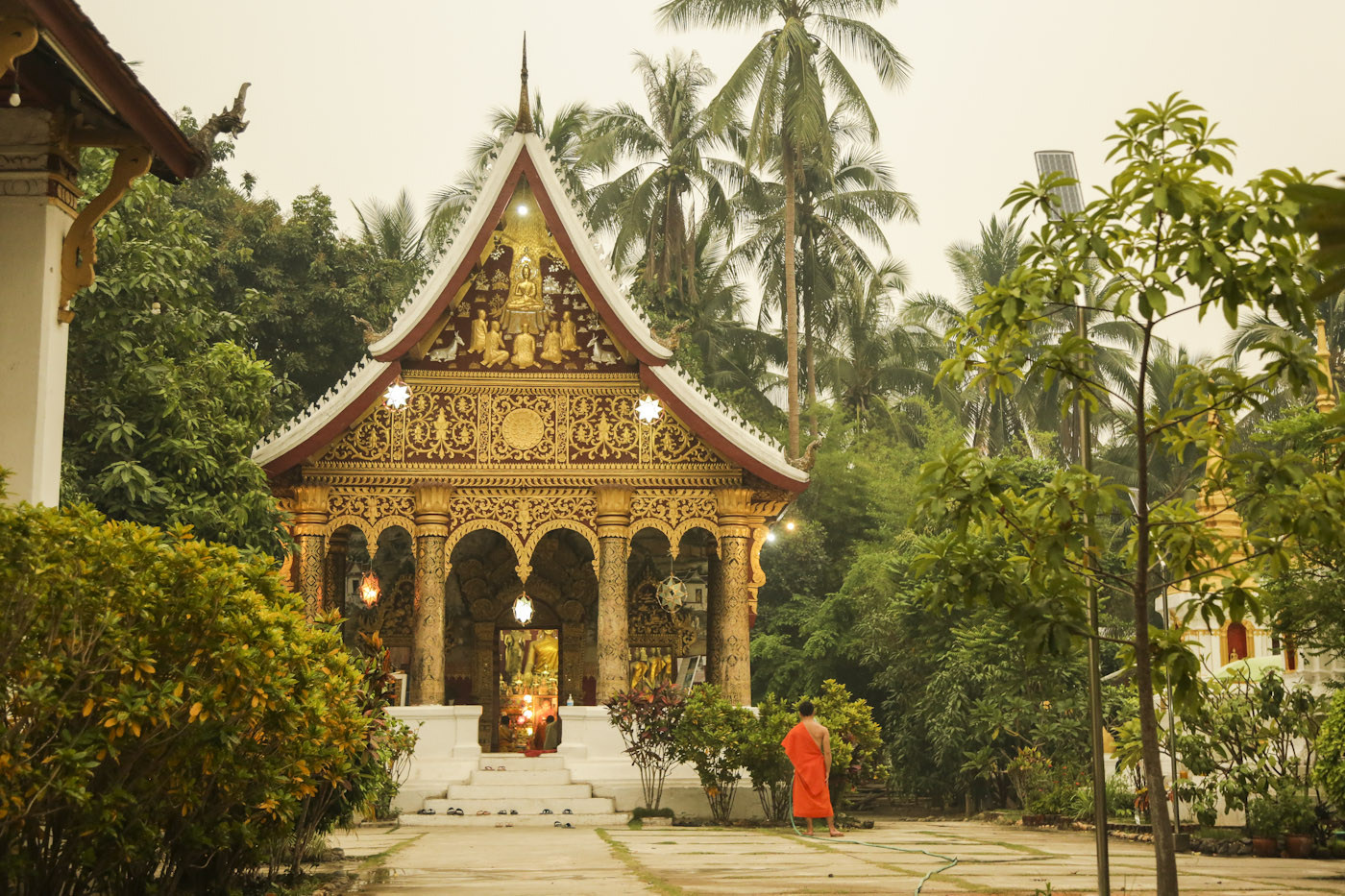 Directly opposite the Institut Français, this small temple is thought to be one of the oldest temples in Luang Prabang, if built in 1645, although it is unclear if it was built then or in 1815. The walls of Wat Pa Phai are painted with sequences of the daily Lao life in the late 19th century in a style that is Tai–Lao. 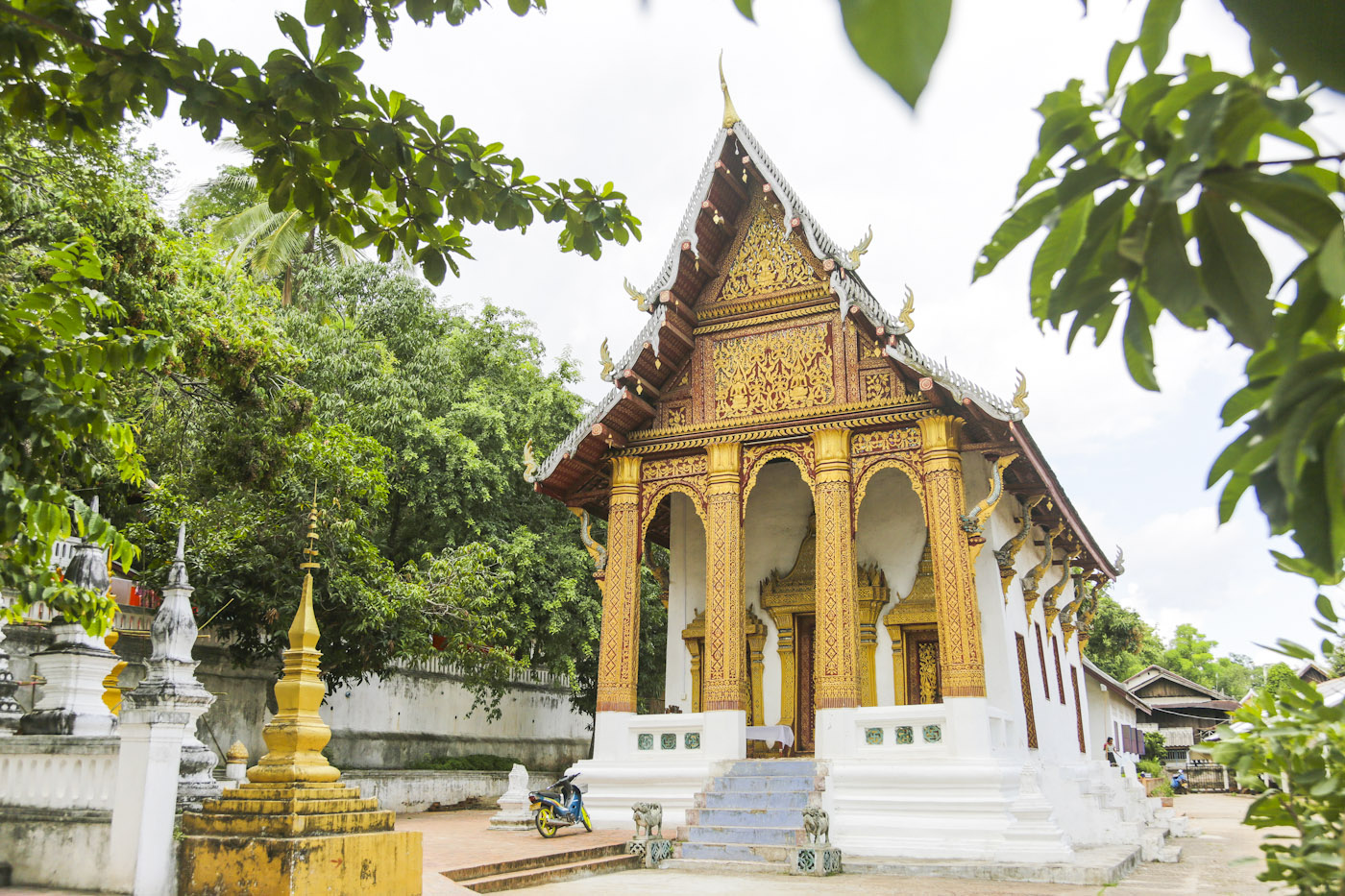 This is another central but very quiet temple. On the day we visited it, we got to meet an old devotee that spoke French and who spent some of his time telling us about Buddhism, meditation and how important time is. We agreed with him in so many thanks and were sorry that he eventually had to go somewhere else. W would have loved to speak more with him…

Entrance fee: Free entrance
Location: At the corner of Kingkitsarath road with the Sisavangvatthana road, opposite the bamboo bridge that gets illuminated at night 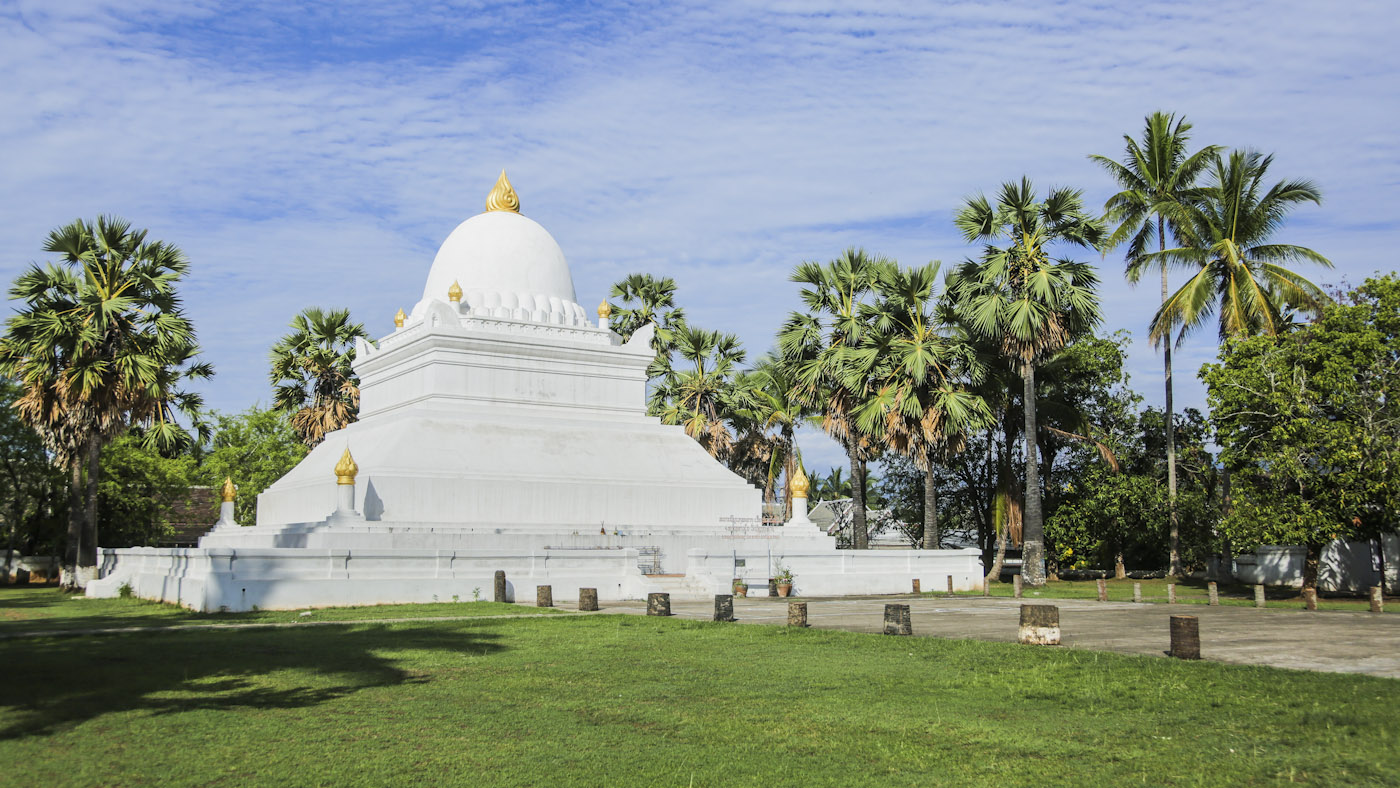 That Makmo’s nickname means Watermelon Stupa. The Stupa’s formal name is That Pathum, meaning Stupa of the Great Lotus. This short and stout stupa dates back to the early 1500s and its architecture is unique in all of Laos. Next to it there’s Vat Wisunarat, built at the same time, it is one of the oldest temples in Luang Prabang.

Entrance fee: 5,000 Kip
Location: Outside the peninsula, on the Wisunarat road

14. Wat Aham (also known as the Monastery of the Blossoming Heart) 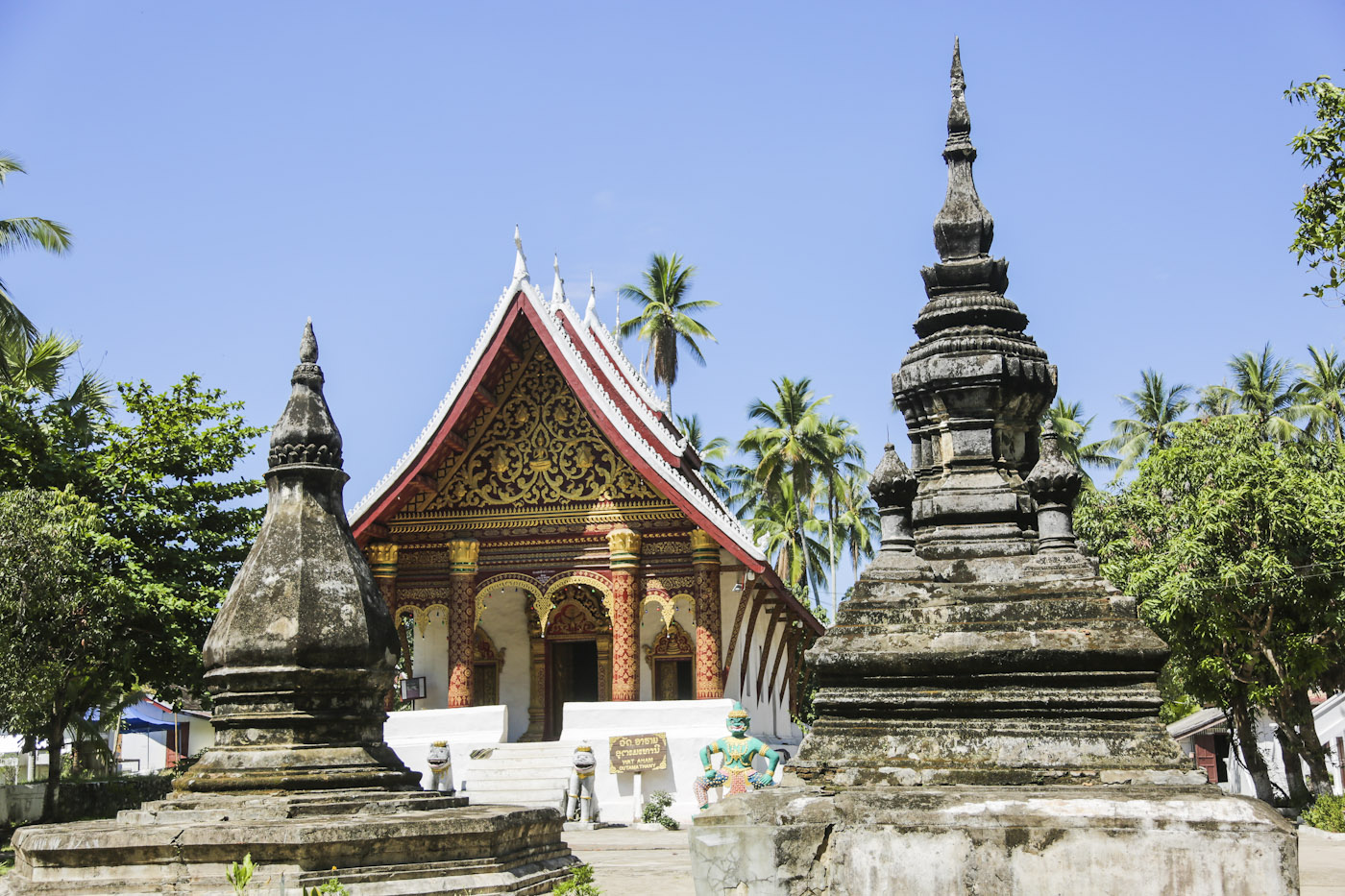 It is believed that the guardian spirits of Luang Prabang lived in the shrine that existed where today stands the Vat Aham temple. When the shine was destroyed by King Phothisaratha, a devouted Buddhist who commanded the construction of a Buddhist temple instead. The guardian spirits (Pu No and Na No) are said to have moved to live in the two banyan trees in the yard of the temple. Despite its central location, it remains a very quiet temple.

Entrance fee: 5,000 Kip
Location: On the Phomathat road, connected to Vat Wisunarat through a gateway

15. Vat Chom Si on the summit of Mount Phou Si 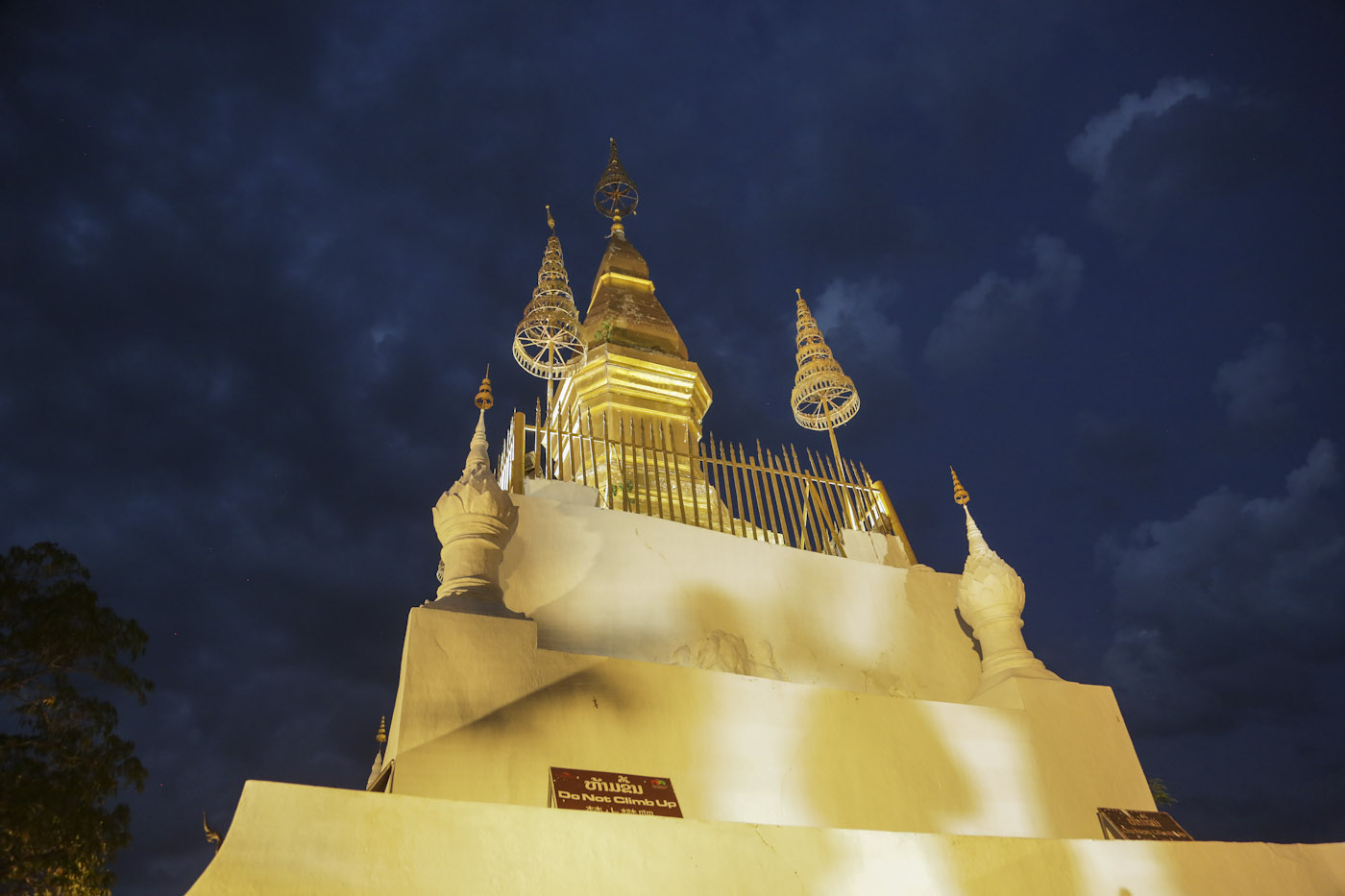 Phou Si hill or Phou Si Mountain is a small hill  in the heart of Luang Prabang, on the peninsula between the Mekong and Nam Khan rivers. Phou Si means “sacred hill” and it is only 100 metres higher than the city, though to climb to the top you will need to climb over 300 steps, whichever staircase you choose o take. There are two ways leading up. The most popular one is right opposite he Royal Palace Museum, with 328 steps. 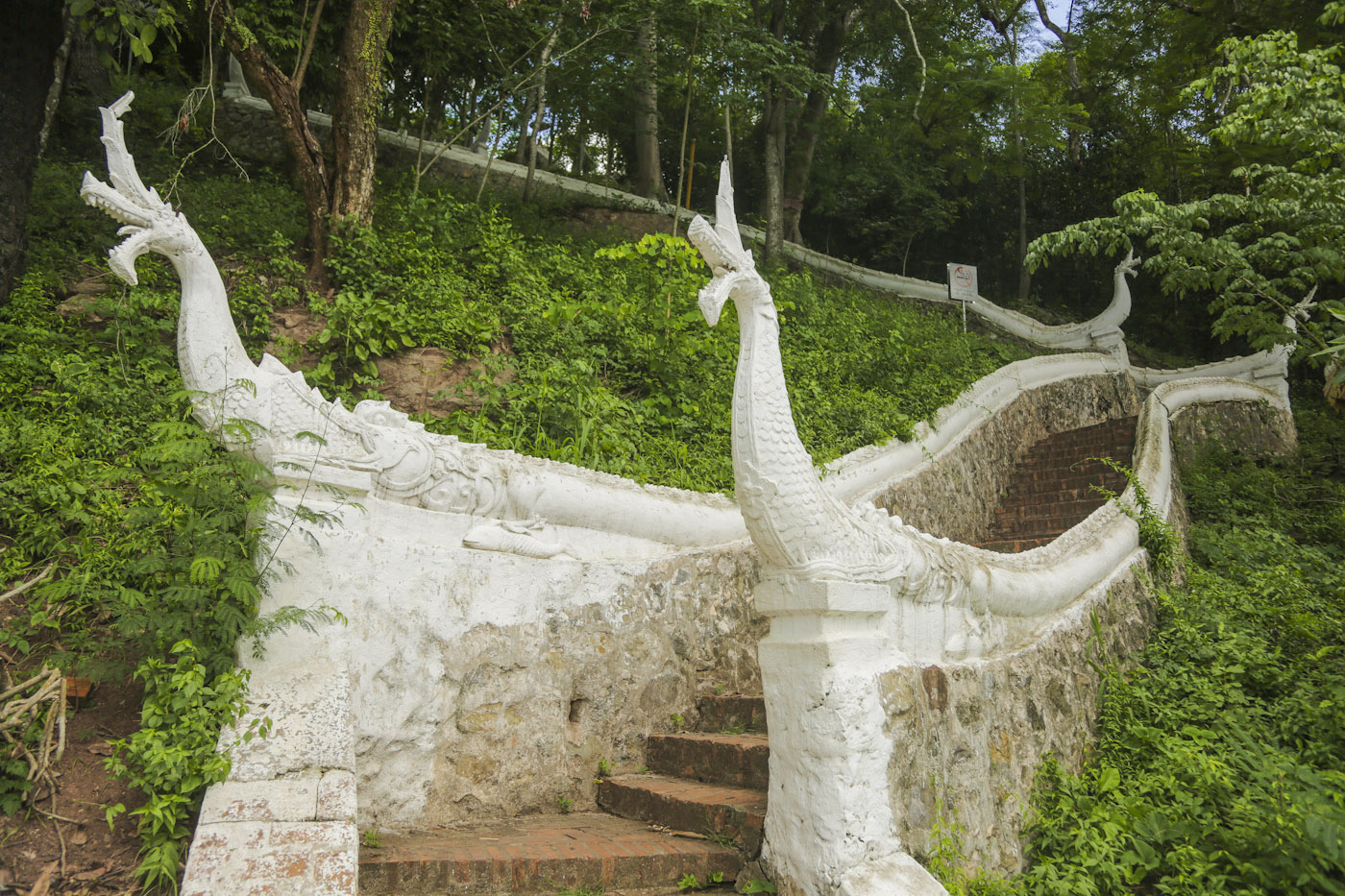 The second way to the top is more interesting, because it takes you up the hill through another temple, where there is also many statues, depicting Buddha and other Buddhist motifs. This way starts next to the Nam Khan river on Thanon Phousi road, and is slightly longer, with 355 steps. It is also possible to make a loop and go up one way and come down the other.

16. Vat Phon Phao (also known as the Temple of Tranquility) 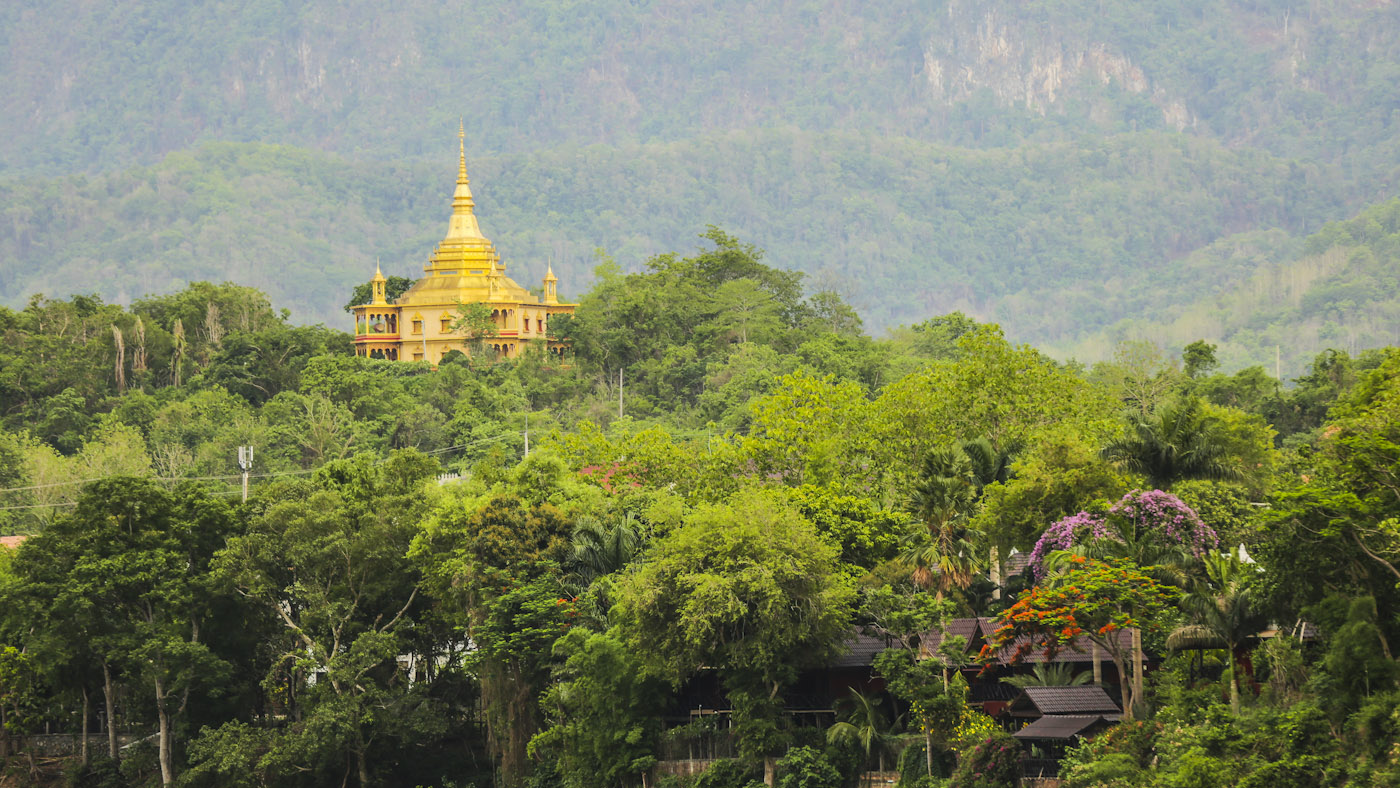 Vat Phon Phao is not a central temple, but it is easily reached by tuk-uk. Alternatively, it is also well seen from Mount Phousi, as it is also located on a hill and because of its golden and roof and octogonal shape the temple is easily recognised. It is worth a visit because of its lovely interior as well as because of the views over the city of Luang Prabang.

> Find out more about what else to visit in Luang Prabang. 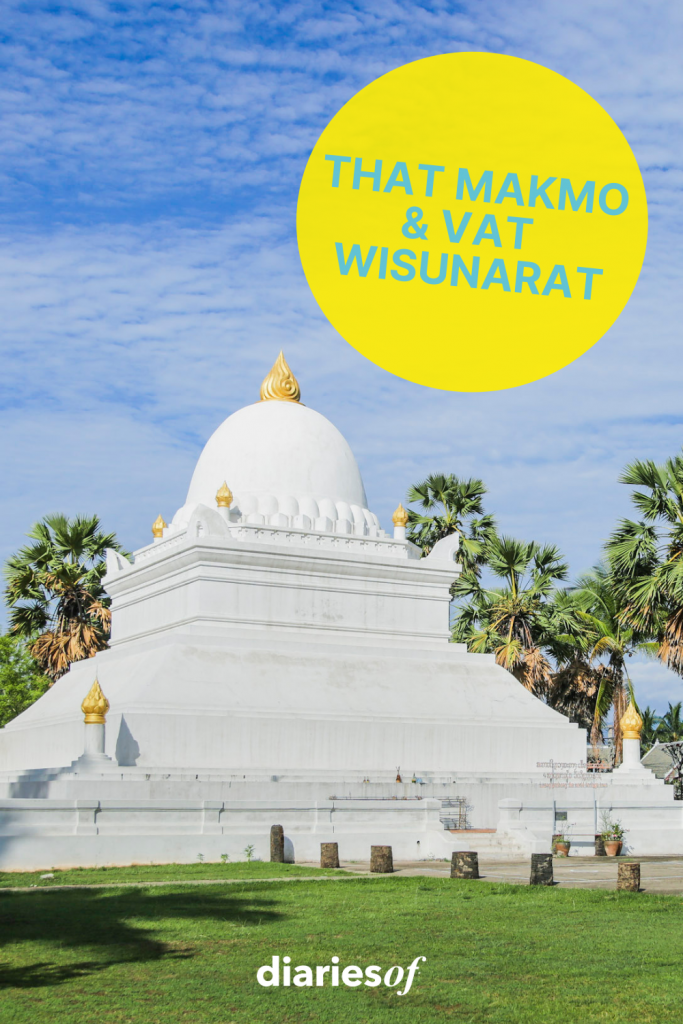 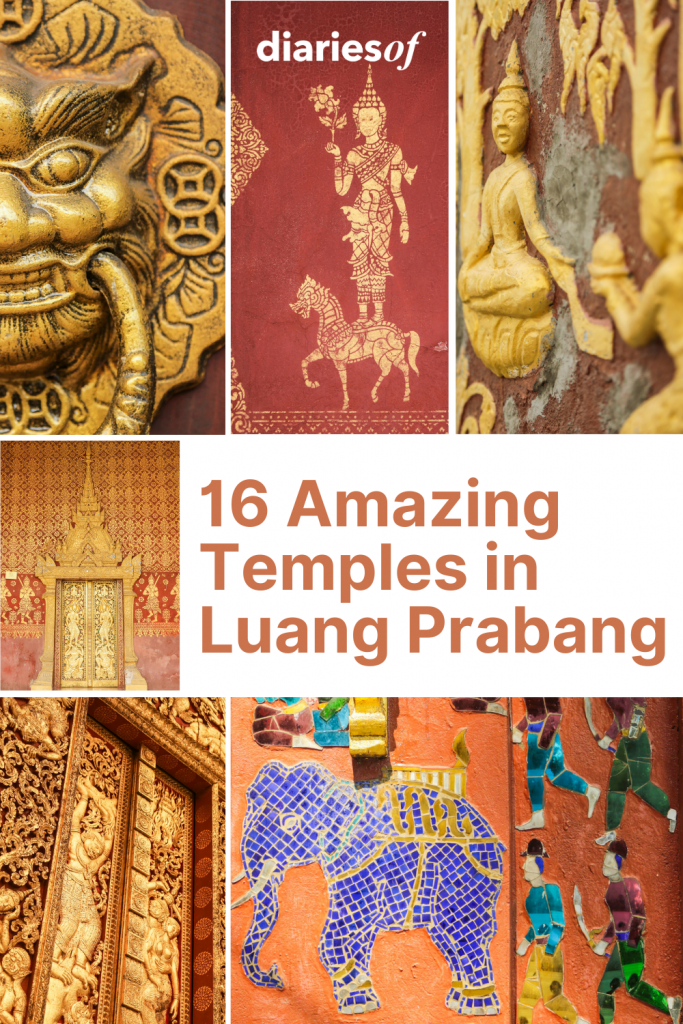