Located in the northern countryside of Luxembourg, Lellingen is an almost forgotten small hamlet that comes to life and to the limestone in April, with the arrival of spring and, coincidently also, with Easter celebrations… But why?

We took the train – by the way, in case you don’t know it yet, since January 2020 all public transports in Luxembourg are free of any charge, you really have no excuse not to explore the region! – and got out at the quiet village of Wilwerwiltz. These villages in Luxembourg’s Oesling region are even more picturesque than the ones in the south. They are set in scenic river valleys and surrounded by tiny but verdant hills, many of them covered in deciduous forests. We can’t get enough of this landscape, really.

When the train stopped in Wilwerwiltz we stepped out to walk the cycling path towards Lellingen, located a comfortable two kilometres away. On the way, we found a small chapel dedicated to Saint Willibrord (yes, you remember well, it is the one from Echternach), crossed a bridge over the railway and another one across the Clerve river (which joins the Wiltz river in Kautenbach).

The daffodil has also been named the Lent Lily because of its long association with Easter celebrations.

Finally we were in the commune of Kiischpelt, and in the centre of Lellingen, next to the church, which is also the marked beginning of the hike we came here to walk. It was not a new trek for us, but it is one that we walk every time we are in Luxembourg in the right season. And the right season to see the wild daffodils in the forests around Lellingen is the arrival of spring. If you want to remember the date, think Easter time and you probably won’t miss them. Actually, the daffodil has also been named the Lent Lily because of its long association with Easter celebrations.

If you want to come and see this phenomenon that is so unique to this area and that you are unlikely to find elsewhere in the country, come to Lellingen in the early morning or late afternoon in order to avoid the crowds. Also, forget about coming on weekends, because that’s when the majority of people comes, and the small village can get crowded. Anytime outside the weekend and you are likely to have the forest all for yourself and, of course, for the wildlife that lives there (remember this and be respectful). 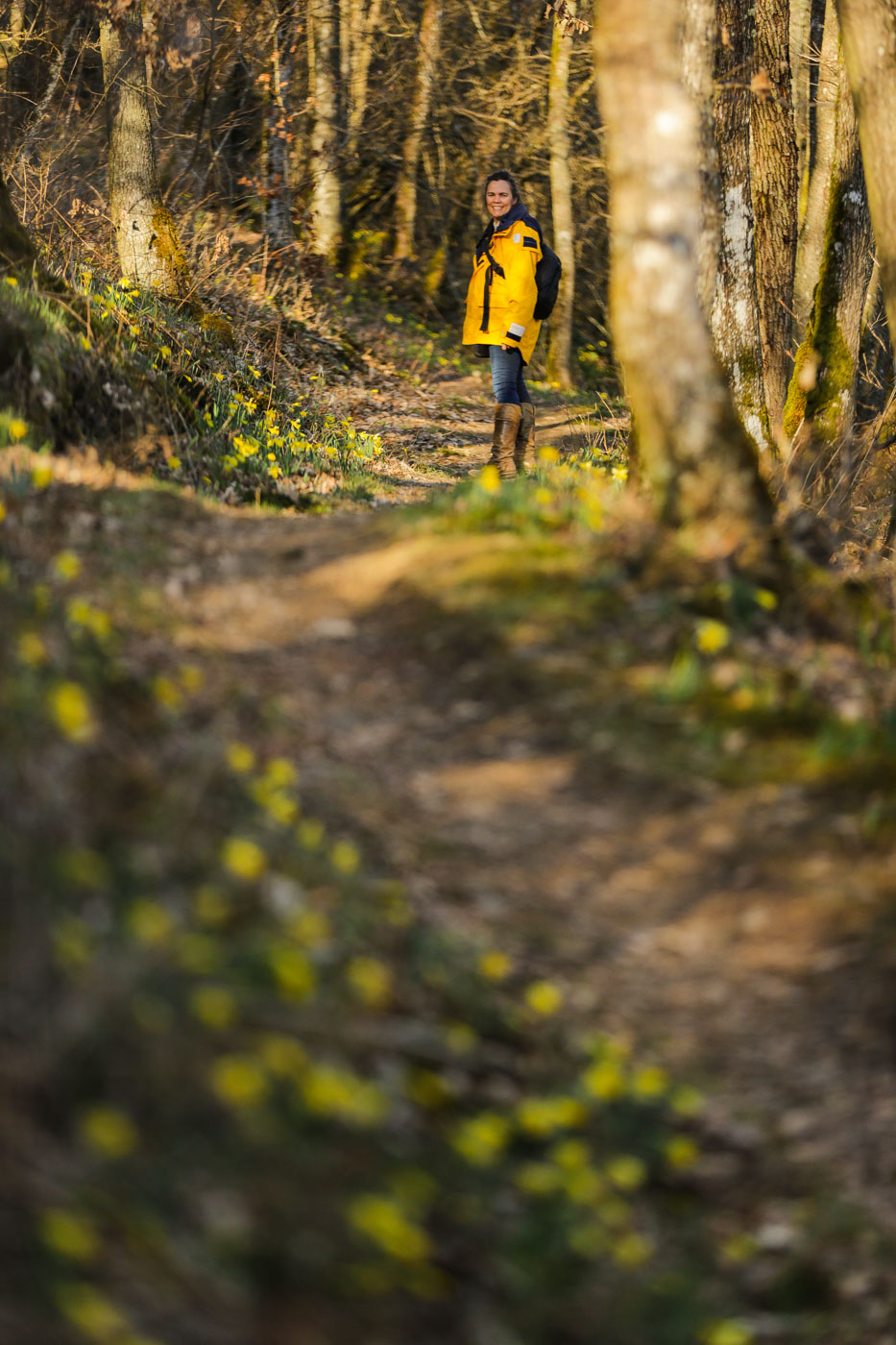 The Lellingen church is the starting point of the Botanic trail. This is the one you should follow if you want to see the daffodils. The trail is well marked and at the starting point you even get to see a map showing the round path that takes between two to three hours to complete and is about eight kilometres long.

Before entering the forest, the path leads through a quiet village street, and you shouldn’t rush through there in order not to miss the old dairy shop and the lovely village architecture.

Finally in the forest, the path starts by being a long steep way that might discourage the weak ones. But make sure to persevere, the views you are about to have are worth all the effort. Soon, the floor of the woods becomes a layer of green and yellow, and you will think that you are dreaming, that it is impossible that the forest can be carpeted in daffodils. 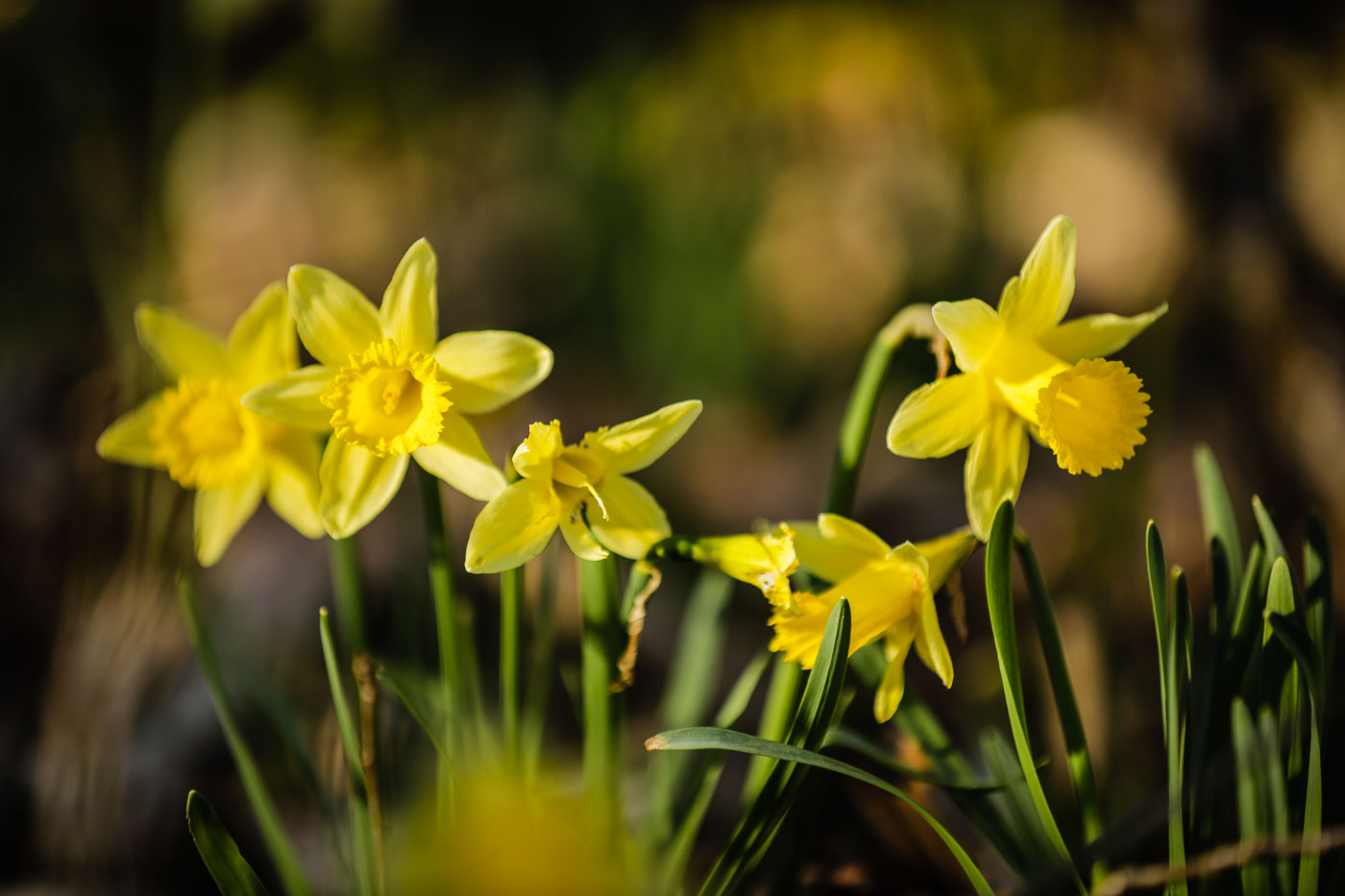 The yellow trumpets of daffodils are a beautiful view that brighten any garden on a spring day, but seeing hundreds and hundreds of flowers extending for kilometres on the floor and slopes of a woodland is an experience that warms the heart as much as the sight. This spring, don’t forget to take a train or a bus and head to Lellingen… 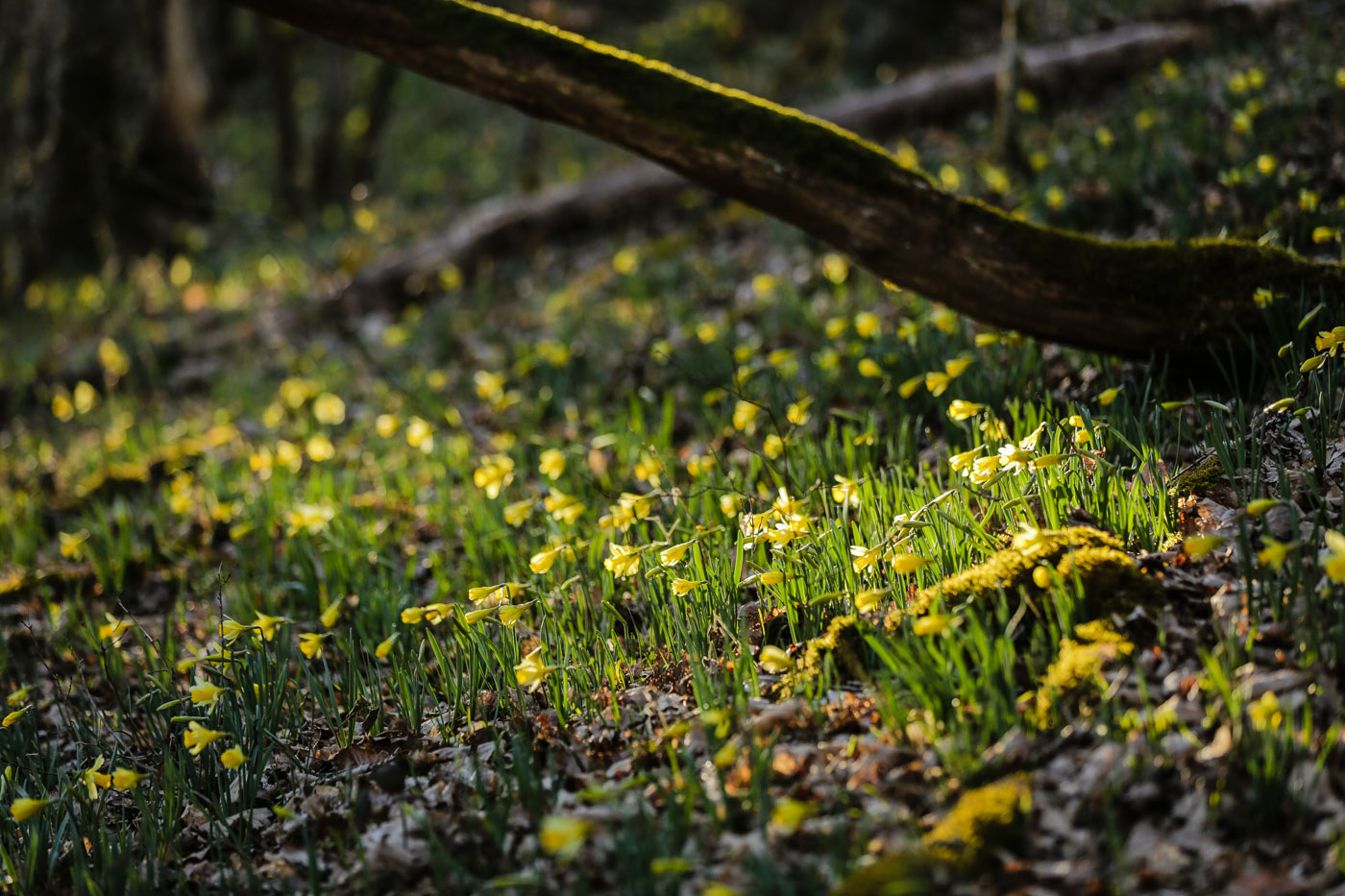 Besides the natural beauties, there are a few other additions which make this site even more poetic and prettier. On the path, a stone slab with William Wordsworth’s poem I wandered lonely as a cloud invites for a break and for a literary moment:

I wandered lonely as a cloud
That floats on high o’er vales and hills,
When all at once I saw a crowd,
A host, of golden daffodils;
Beside the lake, beneath the trees,
Fluttering and dancing in the breeze.

Along the path there are several stone benches that are inviting for a picnic in nature, with the incredible views of the blossoming daffodils. Once the path makes a turn of 360 degrees, you realise this is the turning point and the trail starts taking you back to Lellingen. You can however decide to keep walking, and will end your walk in Bockholtz, another beautiful hamlet nearby. From there, a bus passes sporadically (but you shouldn’t count on it), better to walk all the way until Hosingen where you will find many buses to the southern end of the country.

The daffodil’s latin name ‘narcissus’ comes from an ancient Greek legend, according to which a beautiful hunter called Narcissus fell in love with himself when he saw his own reflection in a pond of water. He was so overwhelmed by what he saw that he fell and got drowned. It is said that the first daffodil grew up in the place where Narcissus died and that the plant’s nodding head reminds his bending over the water to see his reflection…