The most beautiful landscapes of Laos

Laos is one of the least known countries in Southeast Asia. It is a landlocked country, being surrounded by Thailand, Cambodia, Vietnam and China. With such popular neighbours, Laos remained the secret pearl of Southeast Asia that is only no slowly being discovered. There are, however, plenty of reasons to attract tourism. Laos laid-back lifestyle and beautiful landscapes are only two of them. See below our selection of some of the most beautiful landscapes of Laos. 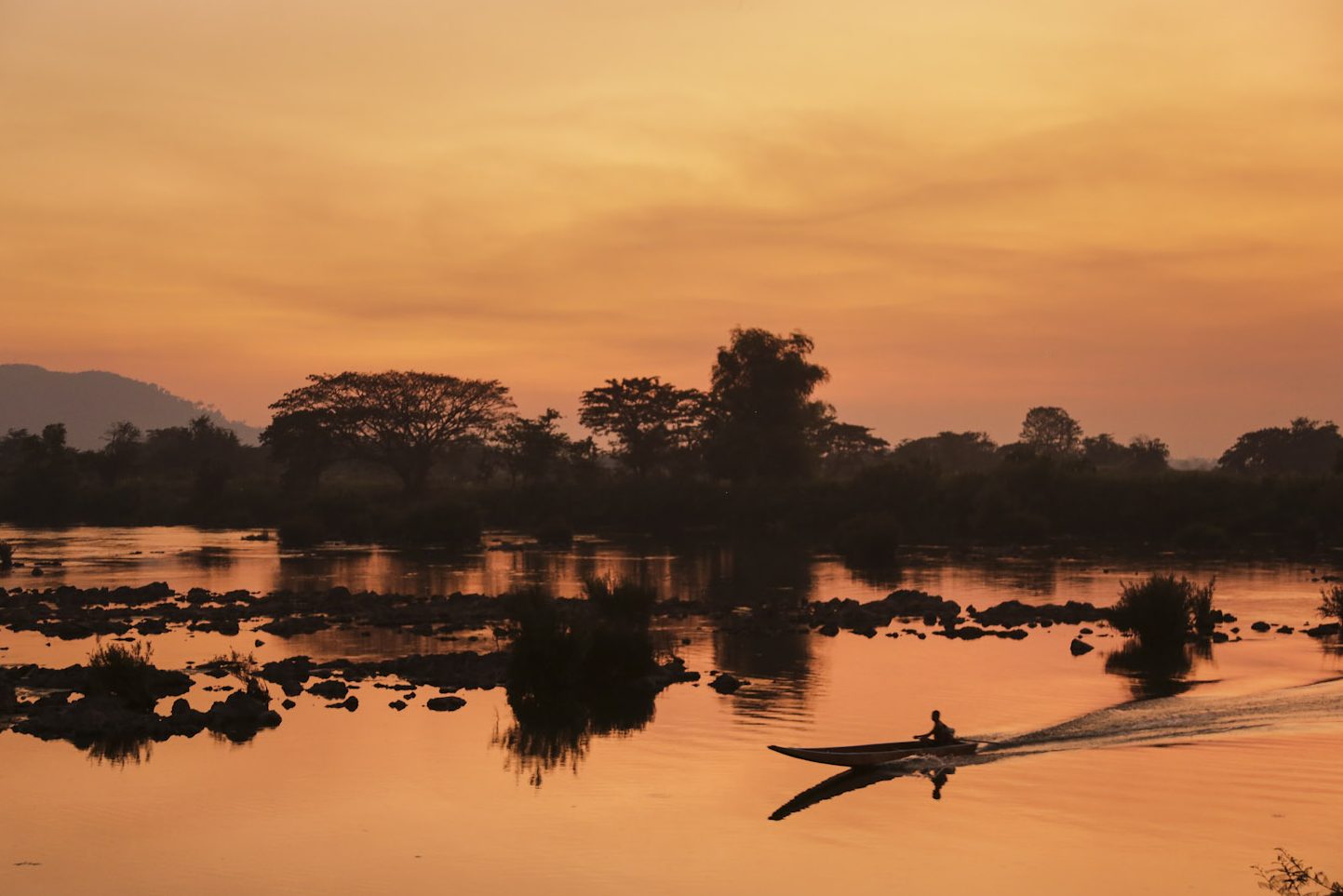 Don Det’s western coast is the most lovely place for unforgettable sunsets as this one. Go early to observe as the sky transforms from blue to red until dusk. Grab a fruit shake in one of the tiny but comfortable cafés by the river and enjoy the natural spectacle.

2. Elephant Washing at the Se Set River near the Town of Tad Lo 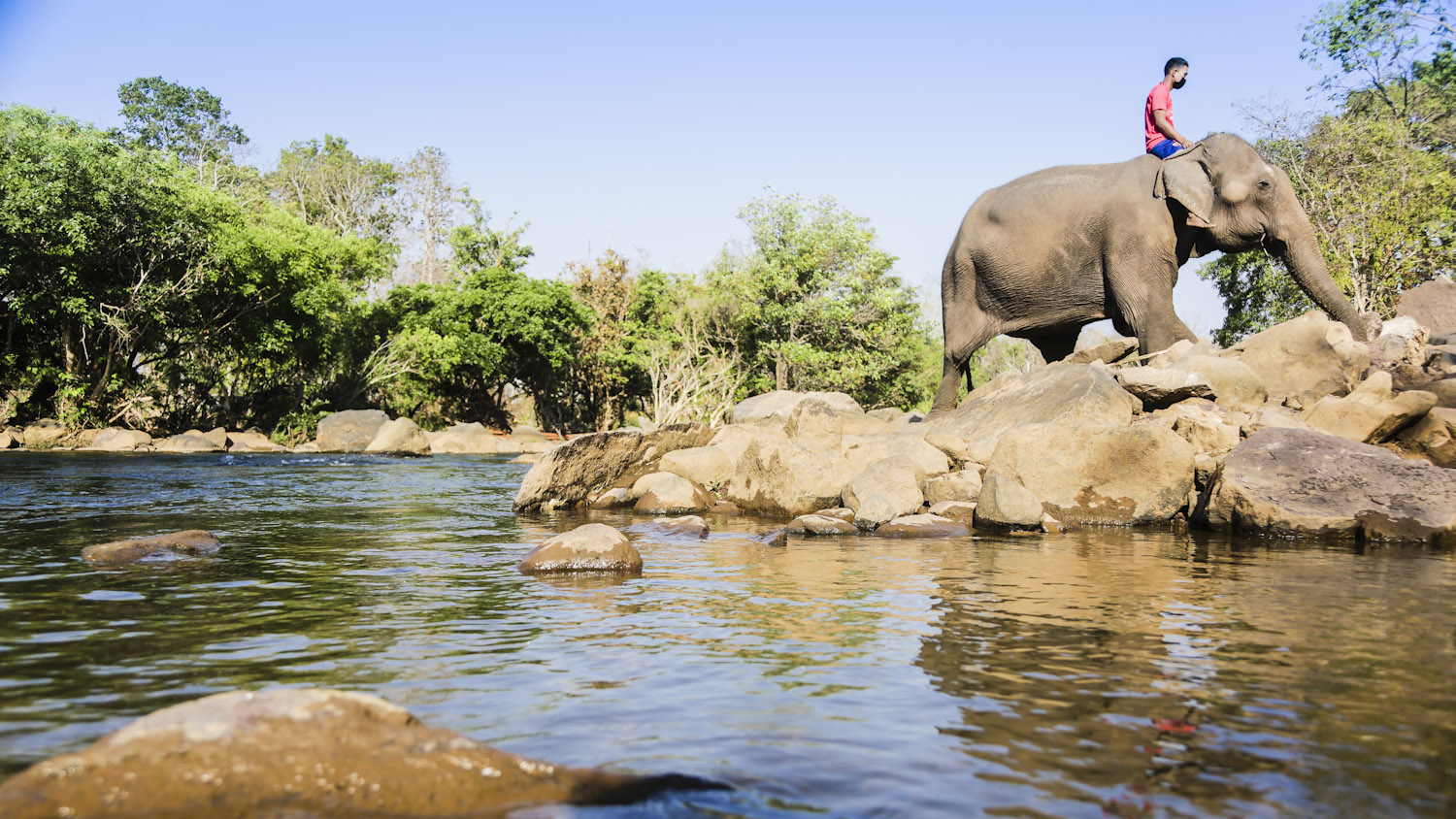 When we saw the mahout – the elephant carer – finishing the washing session with his elephant and slowly getting out of the Se Set River near the town of Tad Lo, we were mesmerized by the grace and the size of this beautiful animal. In ancient times, the Kingdom of Laos was rich in pastures where wild elephants could nurture themselves and live. Back then, the country was known as Lan Xang, or the kingdom of a million elephants. 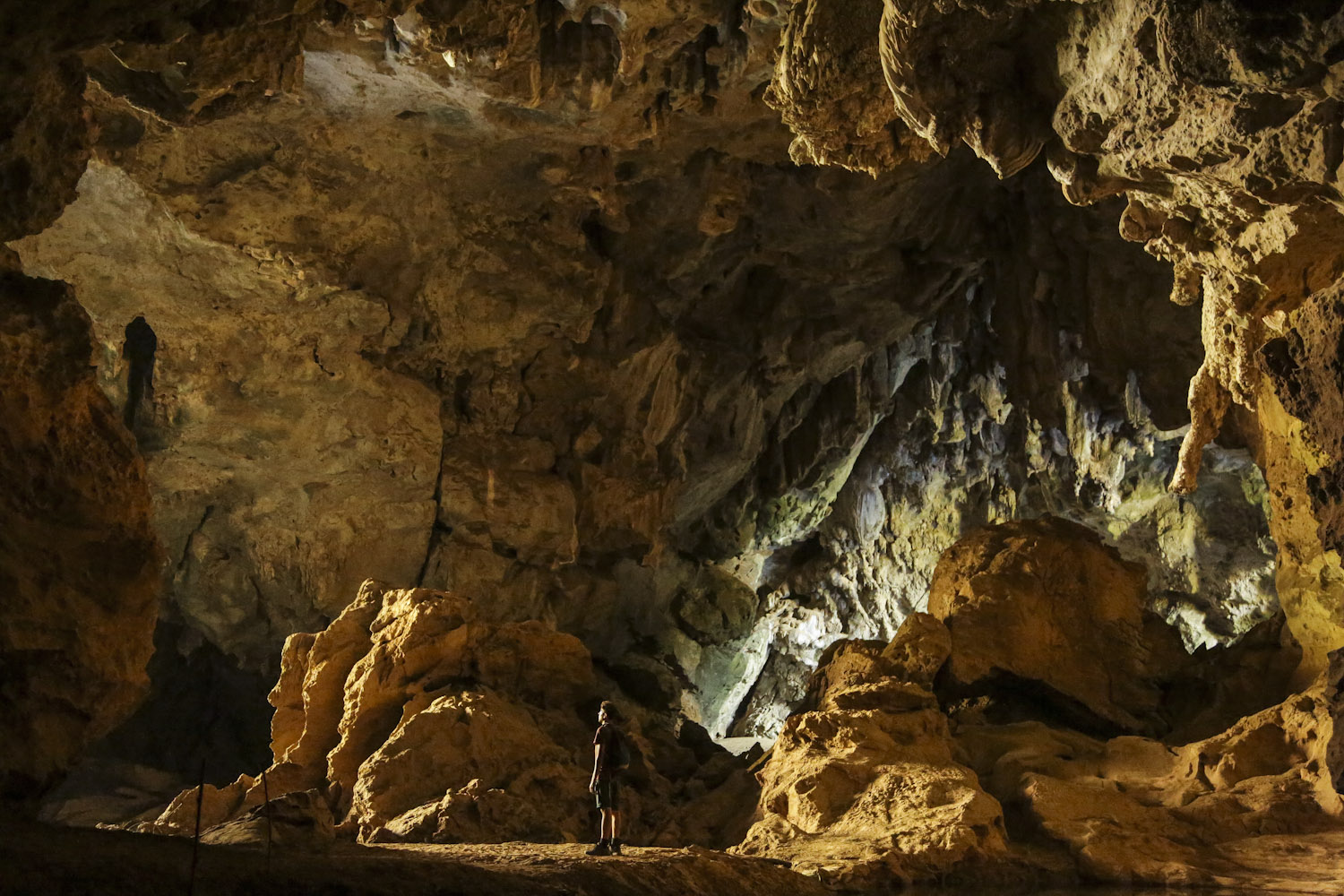 Lao karst topography is the reason for its underground network of caves. Some of its limestone mountain cliffs hide immense caves, making Laos a much-liked place by speleologists.

4. Singular Dead Forest by the Nam Then 2 Dam near Nakai 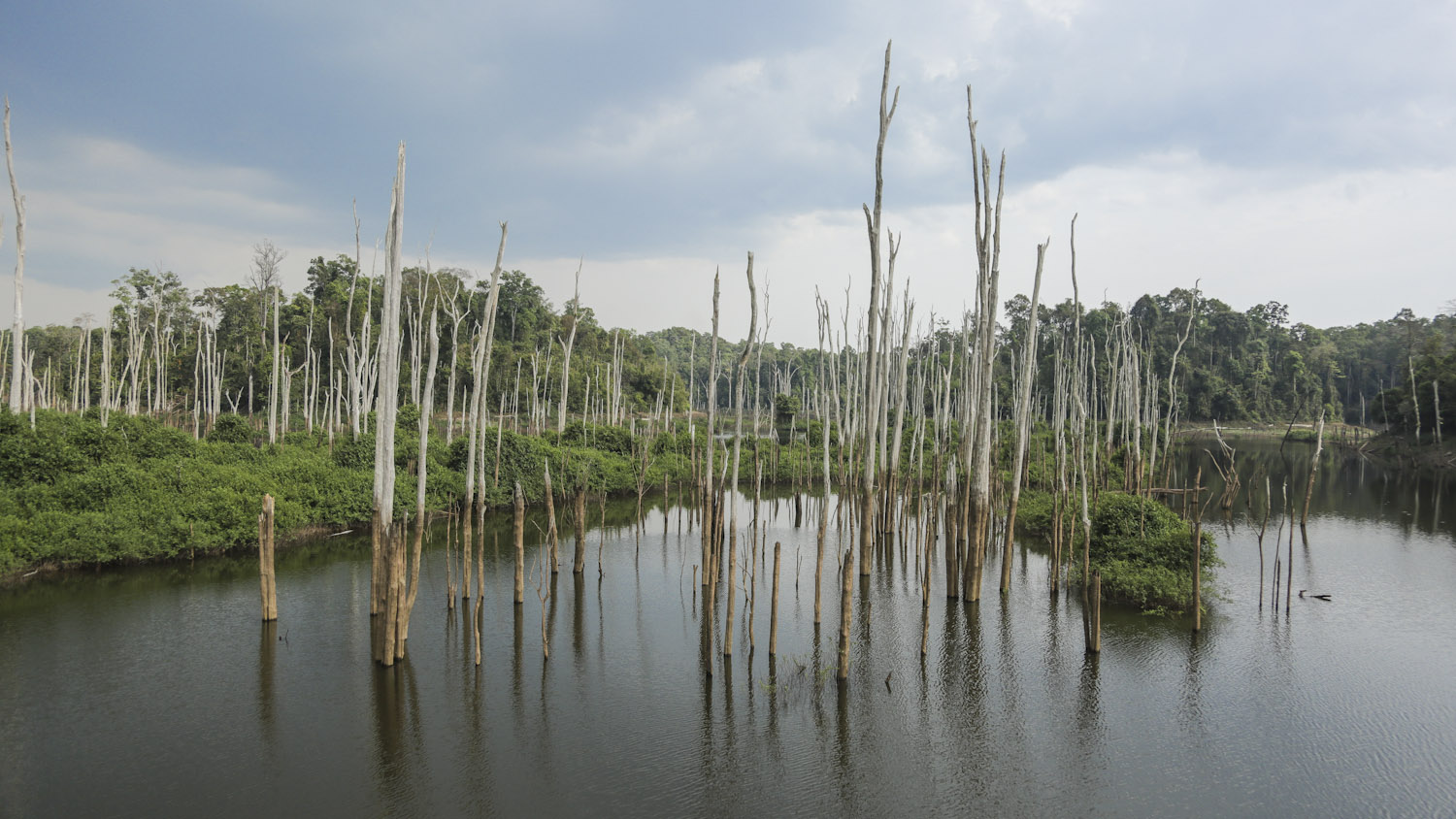 The newly built dam, Nam Theun 2, is one of the largest in Southeast Asia. Unfortunately, it has flooded the valley and dislodged more than 30,000 locals. The most poignant part of the scenery really are the hundreds of ghost silhouettes of dead trees that rise from the waters… 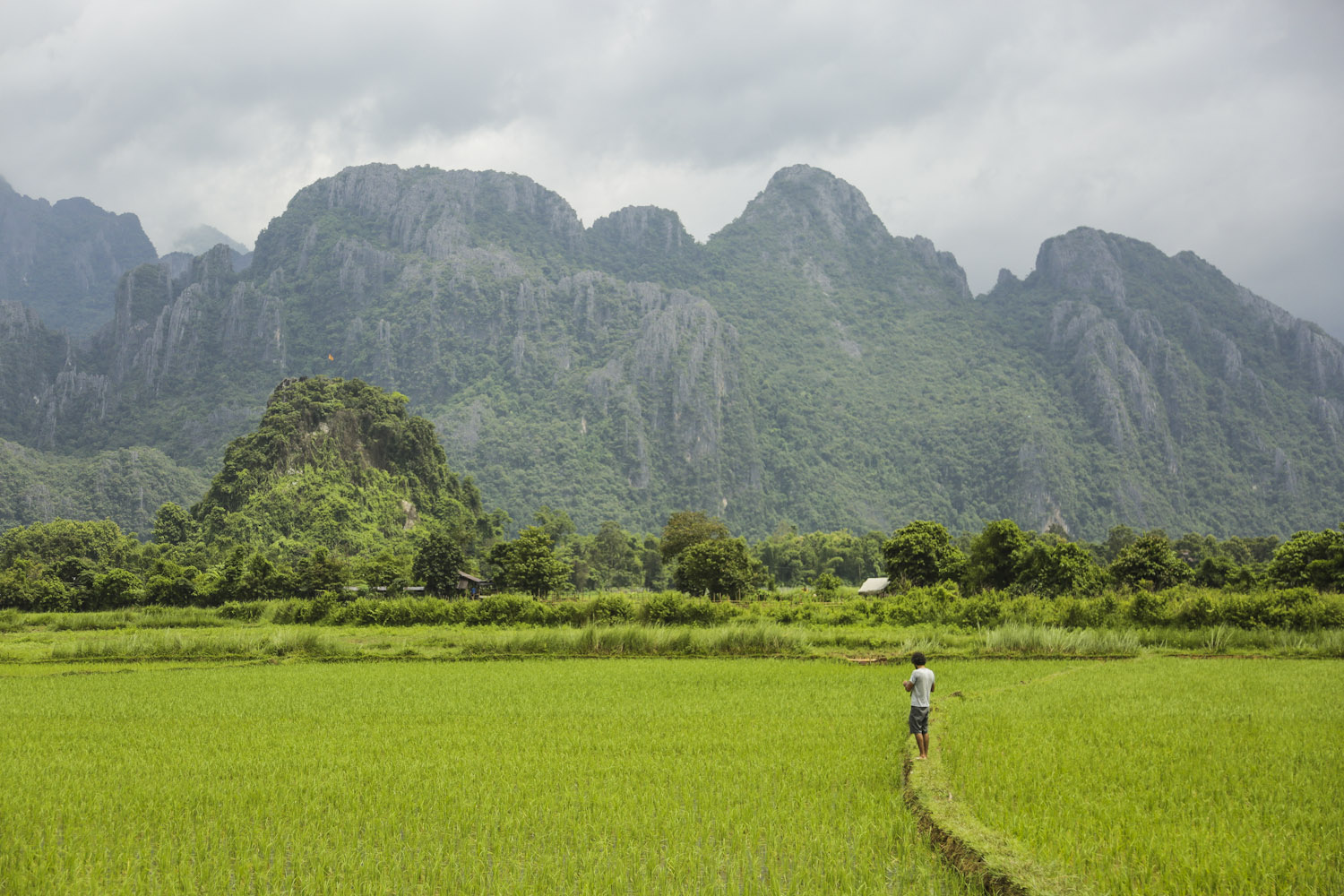 One doesn’t necessarily associate Vang Vieng with rice fields, since town and river are the main attractions, but Vang Vieng has got lovely spots, not far from the centre, where one can find quiet rice fields like this one, where the karst mountains make the perfect frame for the picture. 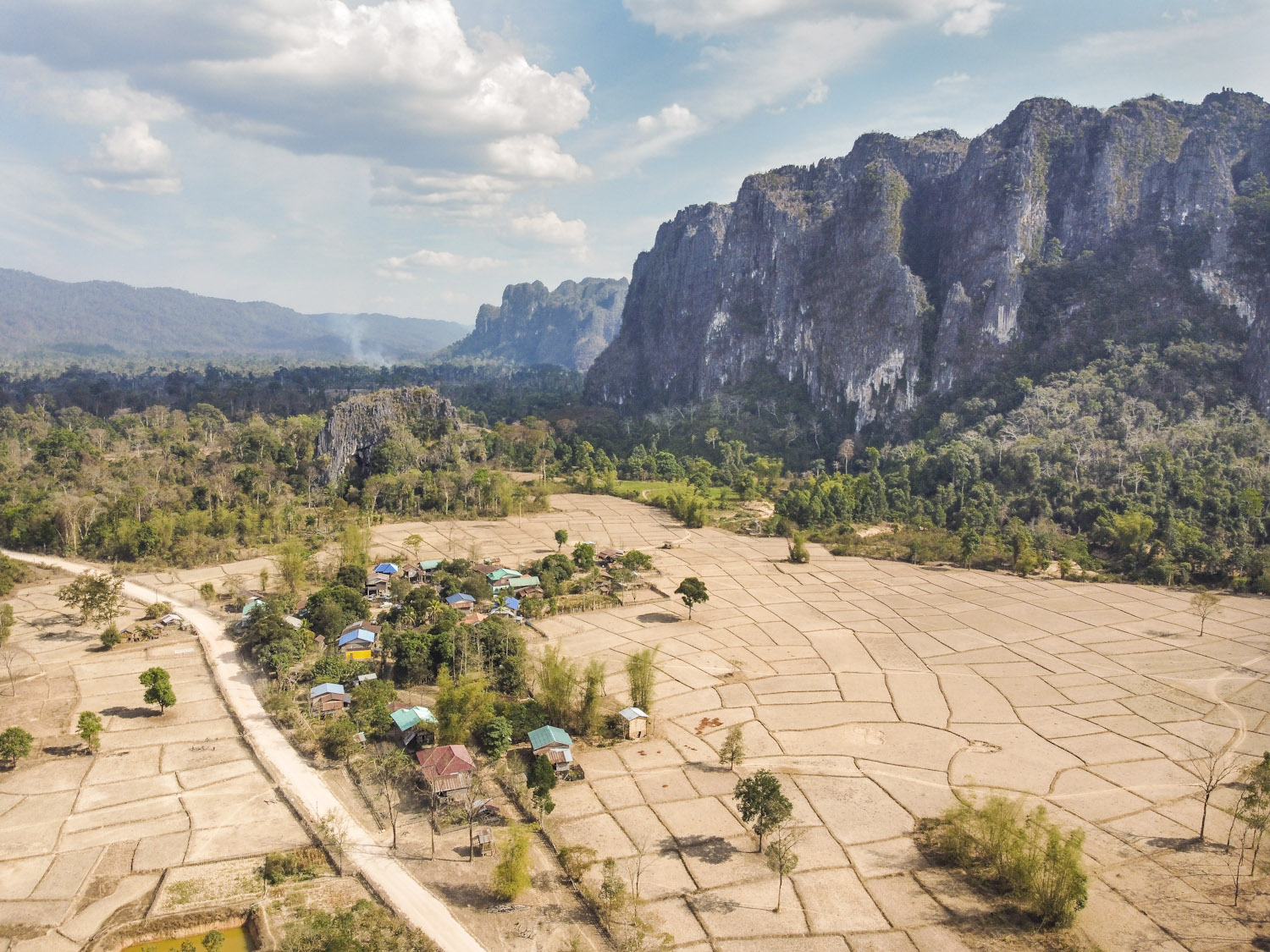 Natane village has entered the tourist circuit only because it is the village that exists at the other end of the famous Konglor cave. Many come here, only because that is part of the boat ride along the cave. Being so tiny and remote, Natane has kept its hamlet feel and charm, with only a handful of houses and no infra-structures for tourists.

7. View over Thailand from Thakhek 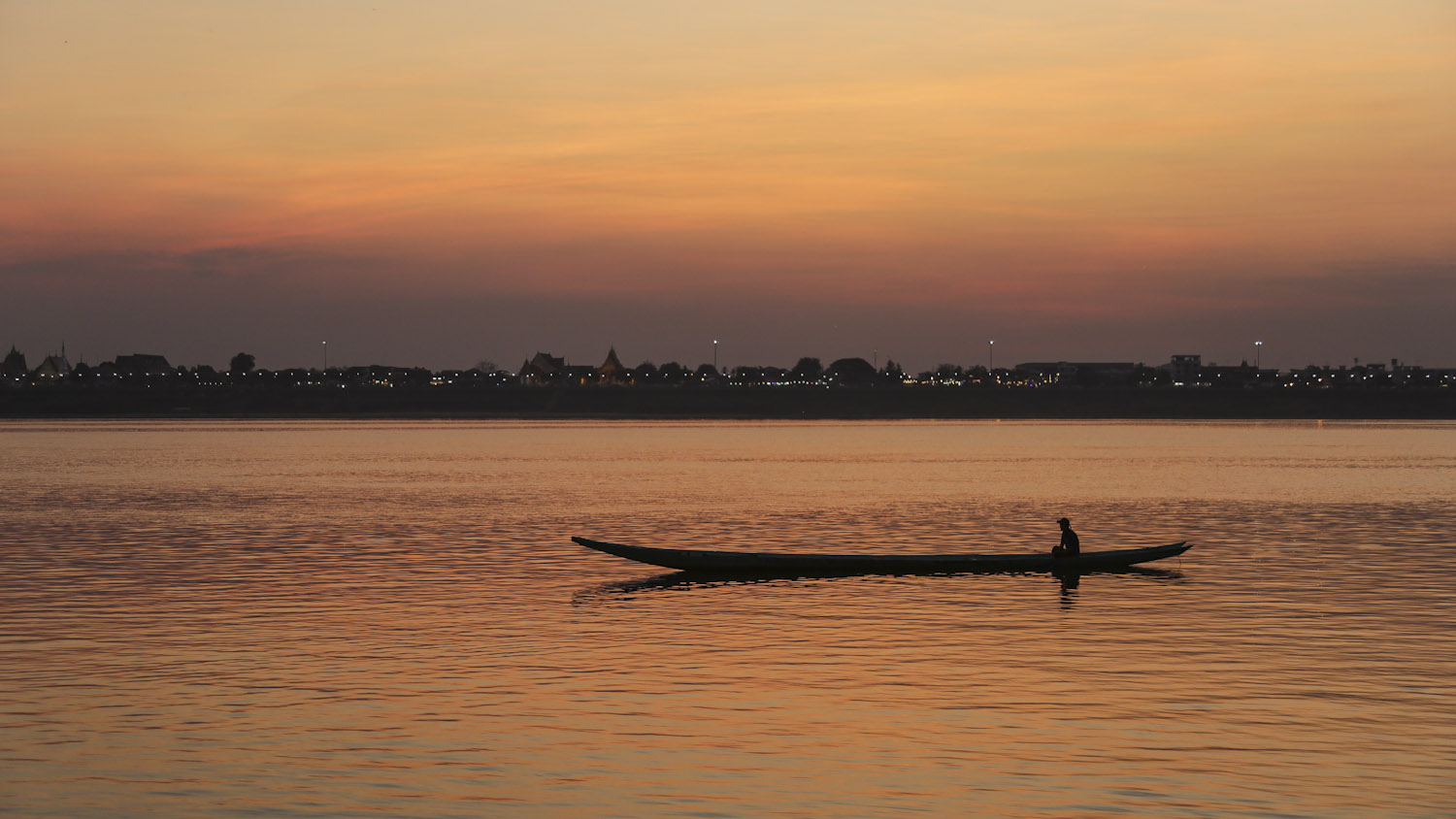 There is no better way to finish the day, than sit by the Mekong river when the sun is setting and the wonderful warm colours of twilight are invading the skies. In Thakhek, when the night falls, one gets to see the lights from towns that stay on the other margin, which happen to be Thailand. 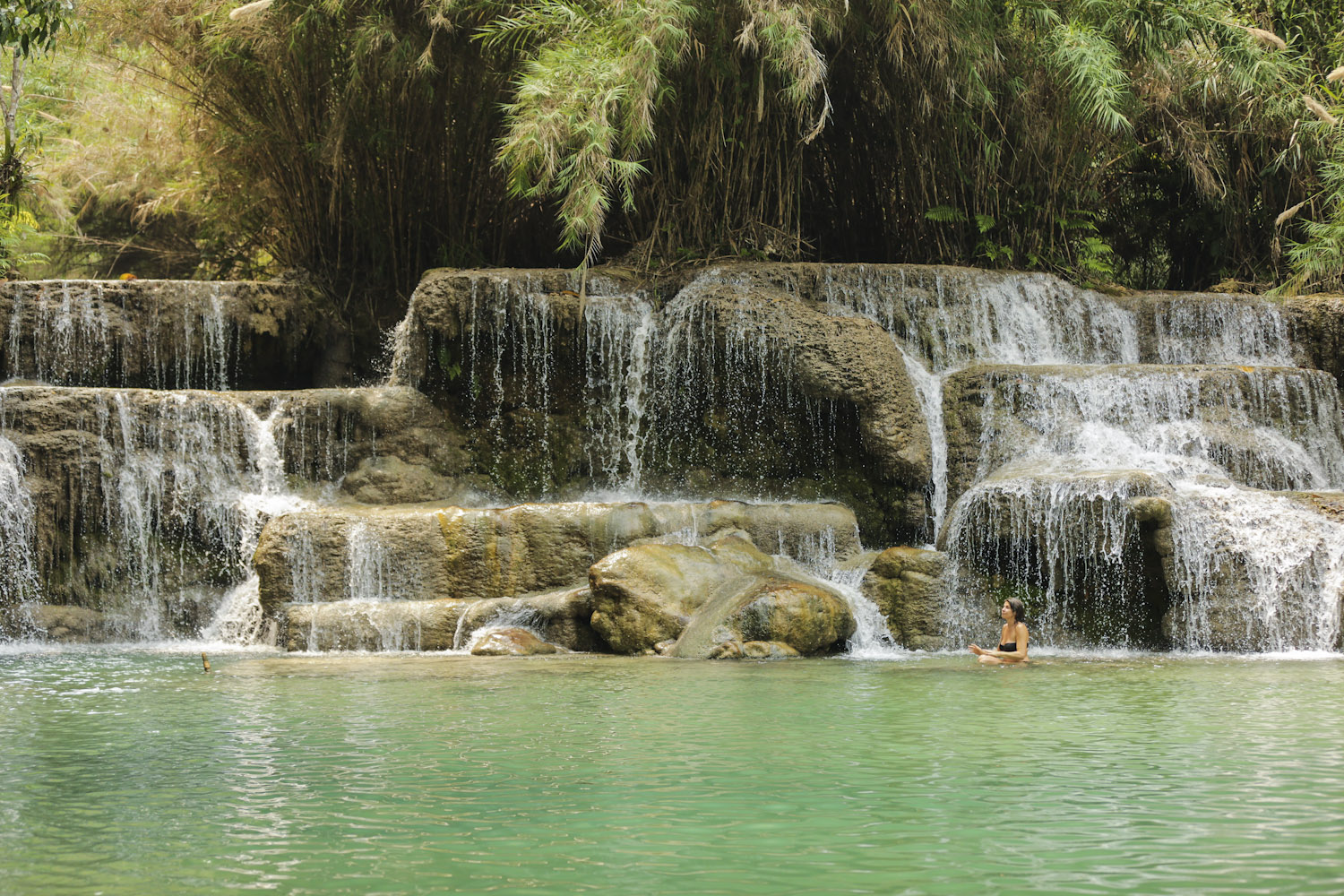 The Kuang Si Waterfall is located 30 kilometres to the Southwest of Luang Prabang. It is famous for its terraced cascades with stunning turquoise-blue colour. Any tuk-tuk driver will happily make a deal to take you there and wait for two or three hours before bringing you back to town.

9. View over the Nam Khan River in Luang Prabang 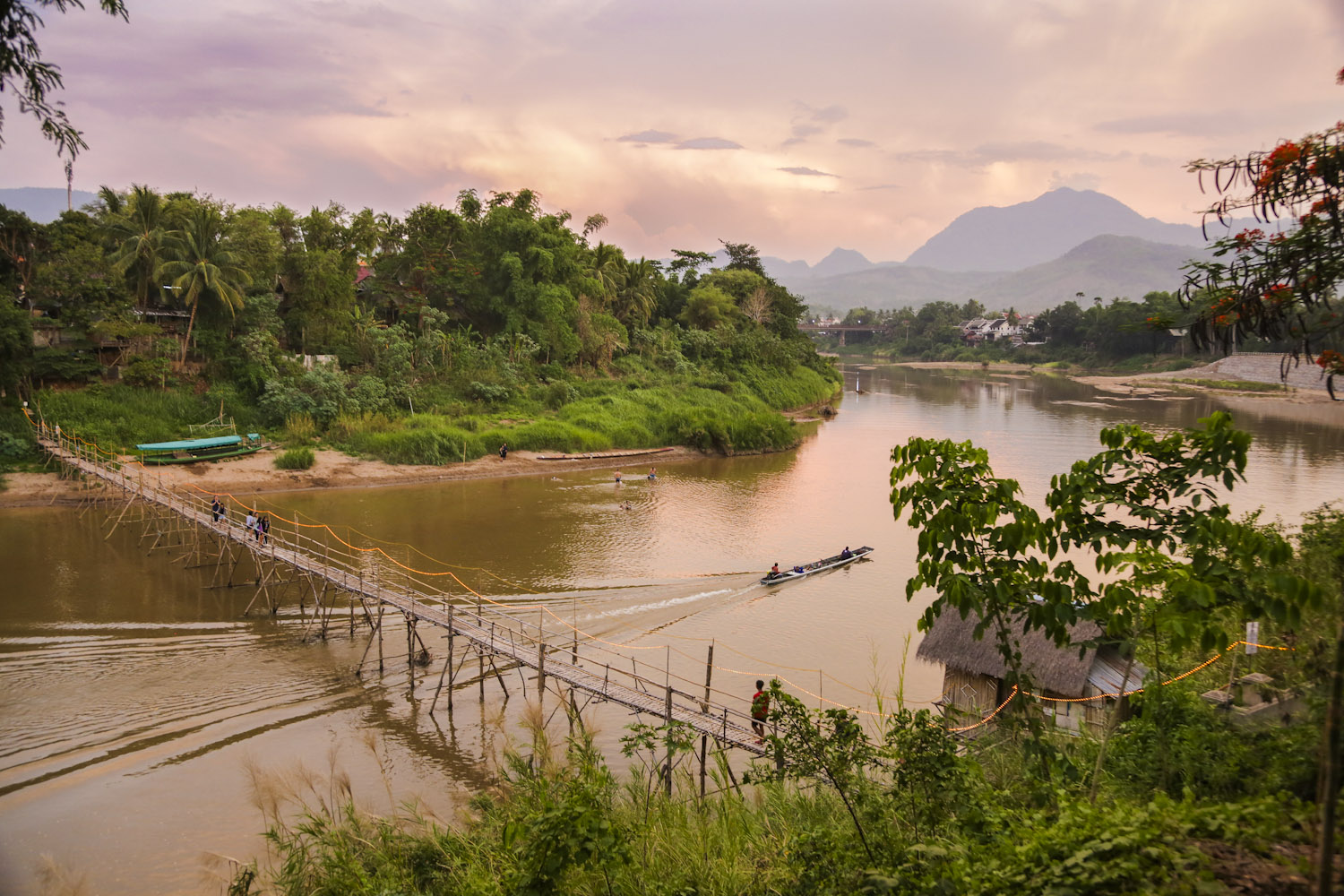 One of the two bamboo bridges that connect the peninsula with the northern side of the town is illuminated at night. These bamboo bridges need to be reconstructed every year, after the rain season. In the high season, in order to cross it, one needs to pay a small fee, but it is worth to use it to explore the other side of town.

10. Mountain next to Pak Ou Cave near Luang Prabang 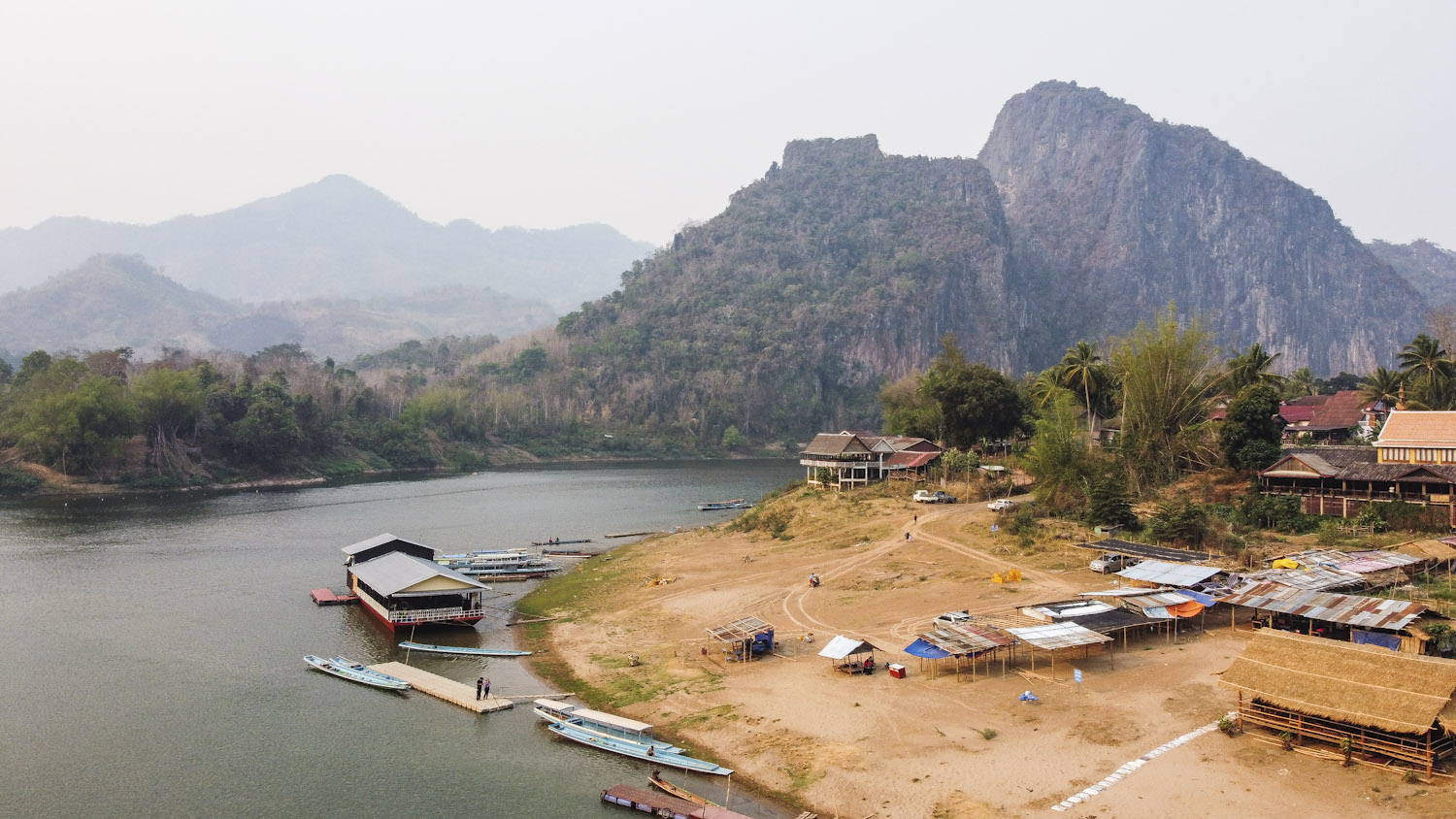 11. Phathang Village on the Outskirts of Vang Vieng 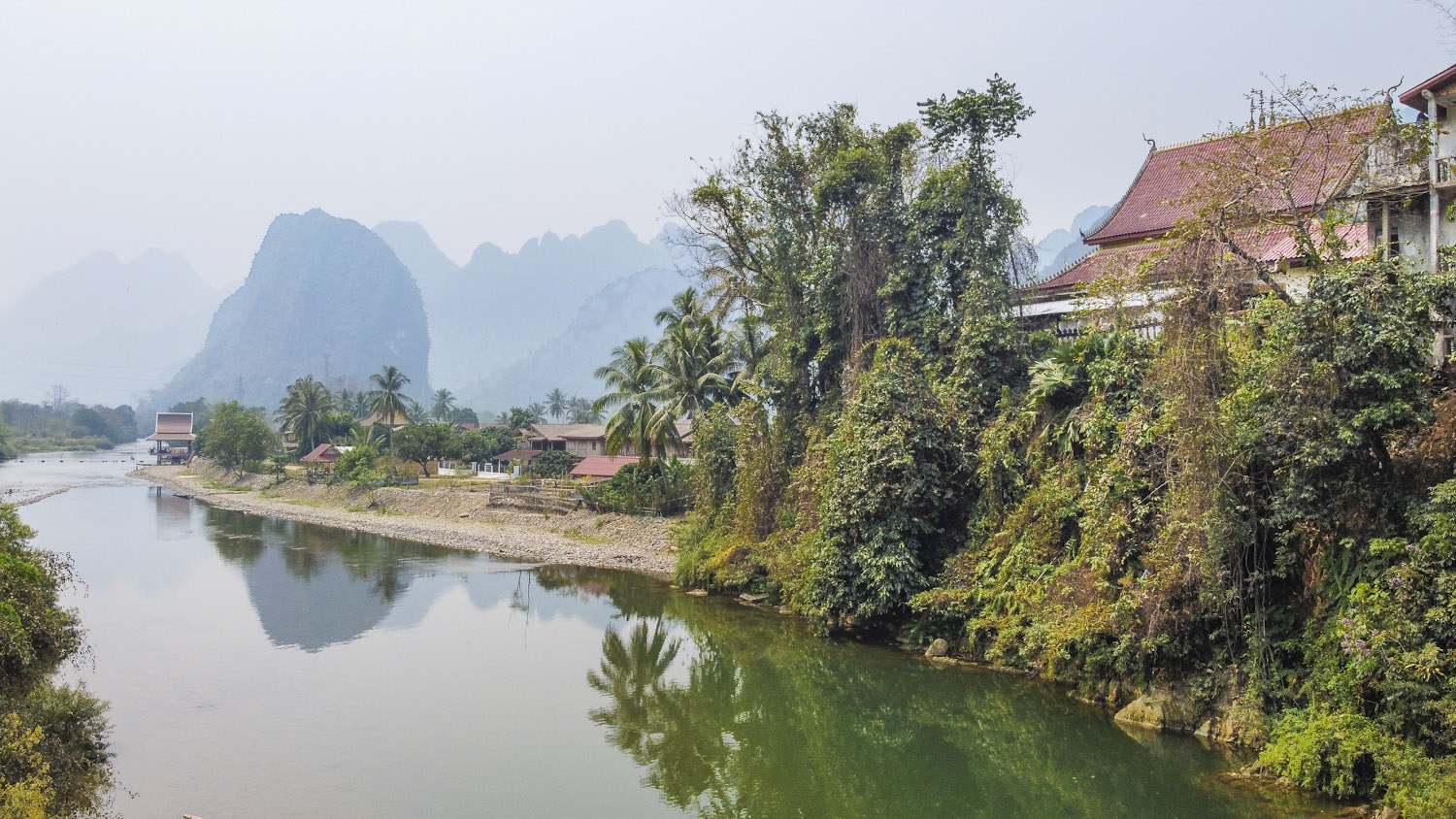 It doesn’t really matter at what time you see this landscape, this amazing landscape of karst outcrops is always beautiful. It follows the Mekong River in Phathang village, only 20 kilometres to the north of Vang Vieng. Those that are driving from Vang Vieng to Luang Prabang will see it appear next to the main road.

12. Boats on the Mekong River 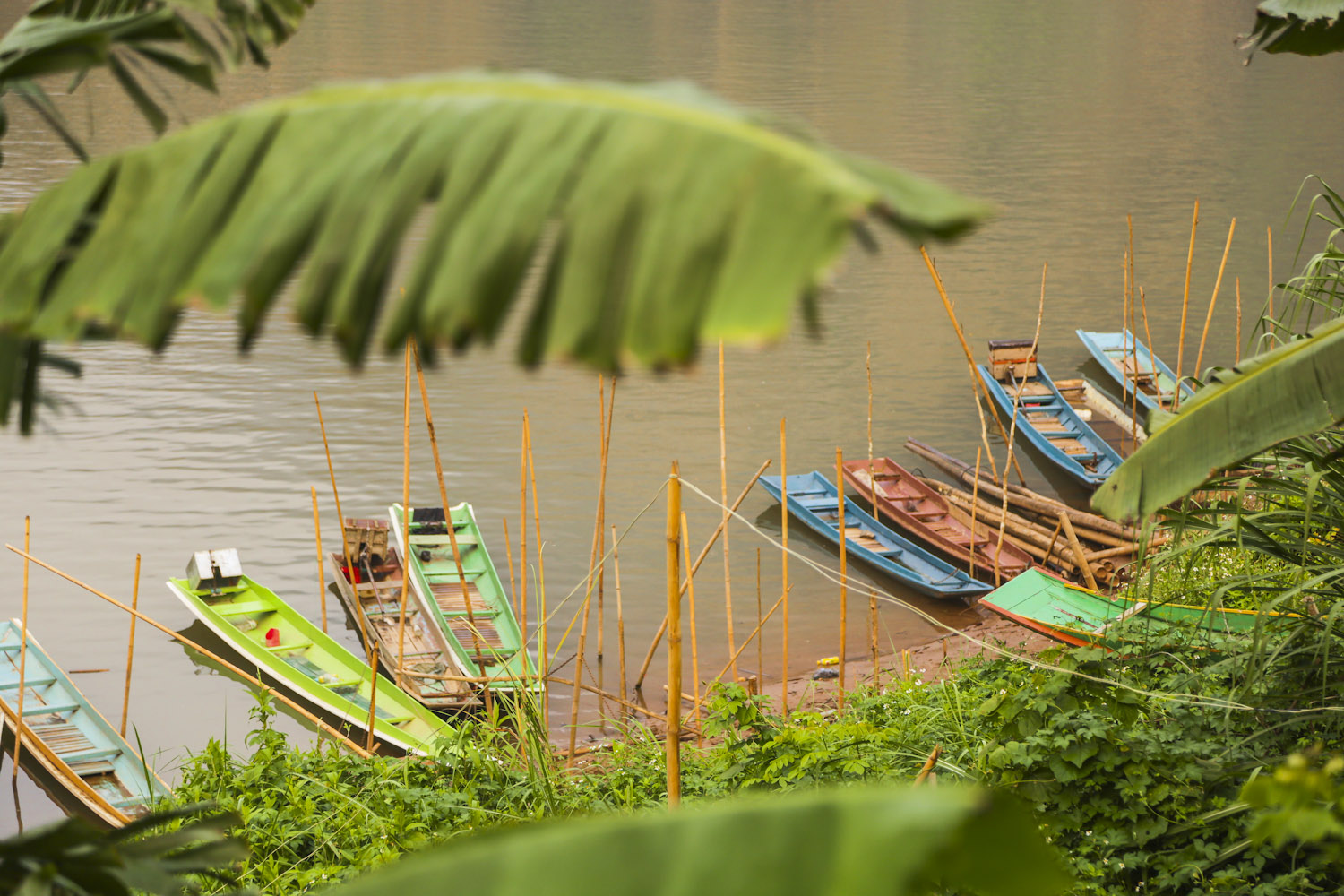 The Mekong River is known by the locals as ‘Mae Nam Khong’ which translates as ‘Mother of all rivers’. This name is justified by its length – the Mekong is the longest river in Southeast Asia, running 4,180 kilometres from source to mouth – but also by its importance as source of different resources. It offers not only electricity, crop irrigation and fishing but also is an important means of transportation. Besides the Mekong, Laos has a vast network of rivers, totalling almost forty. 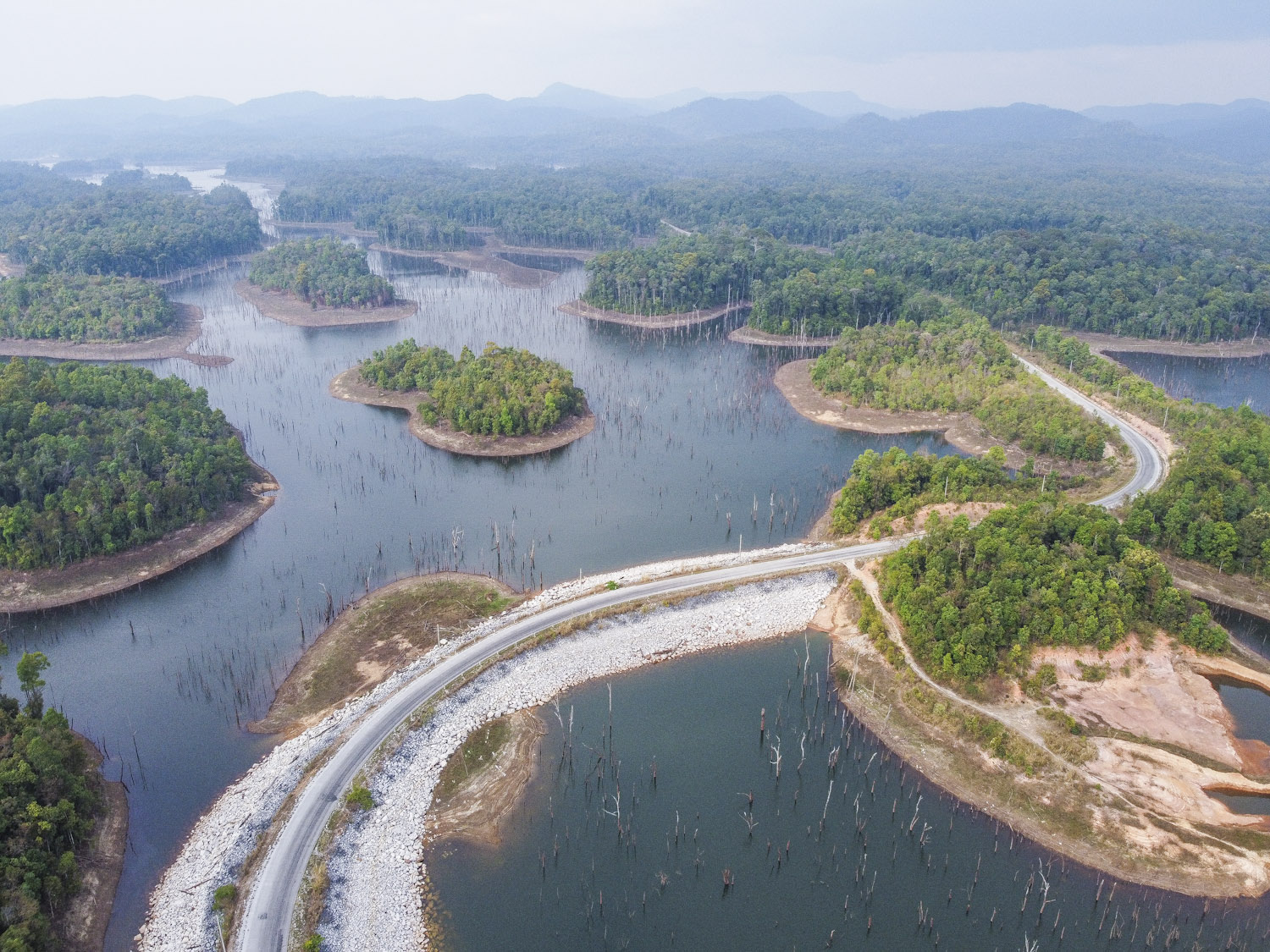 The Nam Theun 2 dam, built in 2010, has flooded the valley and created a beautiful waterscape as seen from above. Hundreds of ghost silhouettes of dead trees rise from the waters near the new dam and it is somehow sad to drive along this landscape, however there is also beauty in sadness… 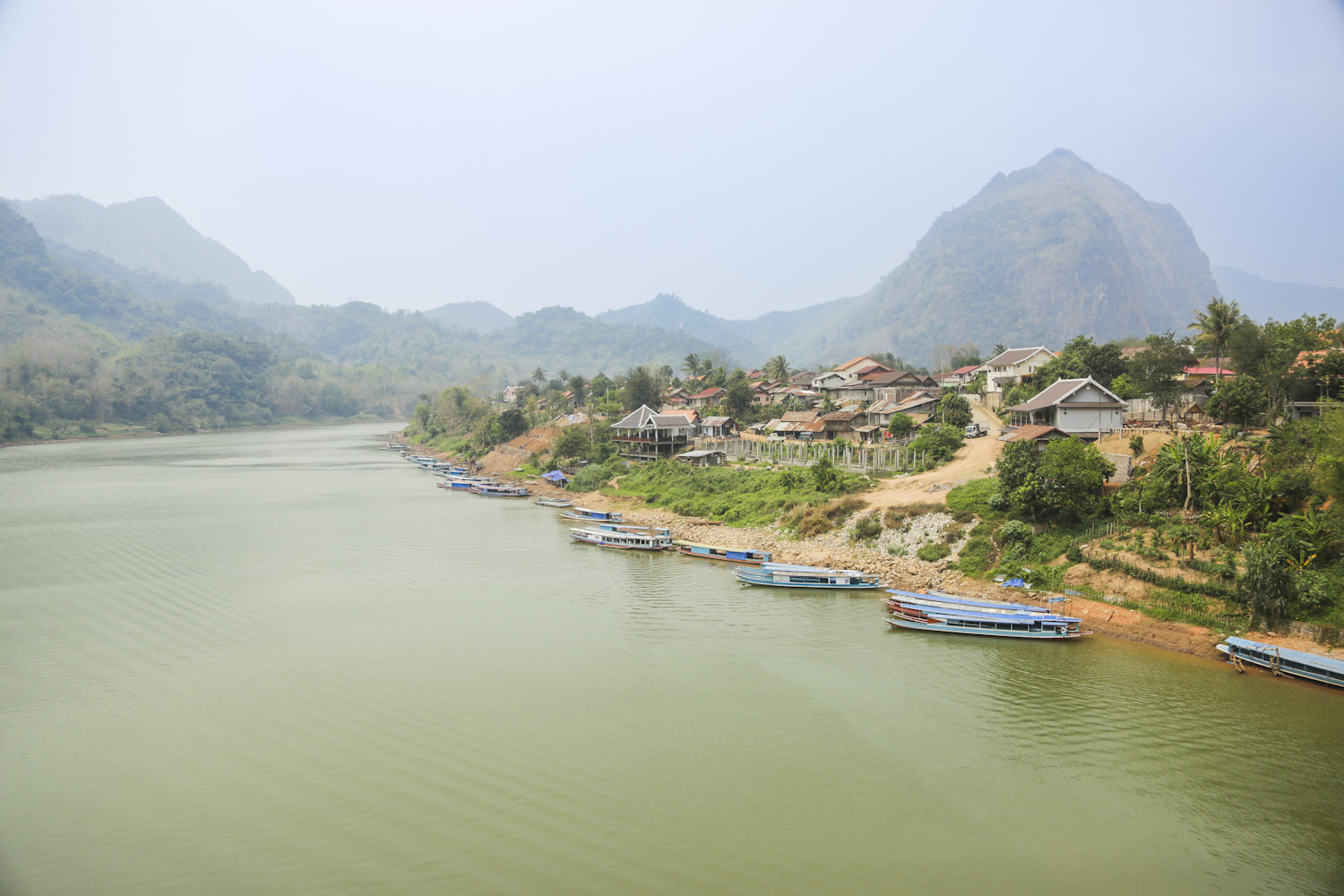 The village of Nong Khiaw is 140 kilometres to the north of Luang Prababng. Many people come to Nong Khiaw for the wonderful hikes available. You can do some of the shorter hikes on your own and for longer ones we suggest getting a local guide at one of the tourism offices in town.

15. From Luang Prabang to Vang Vieng 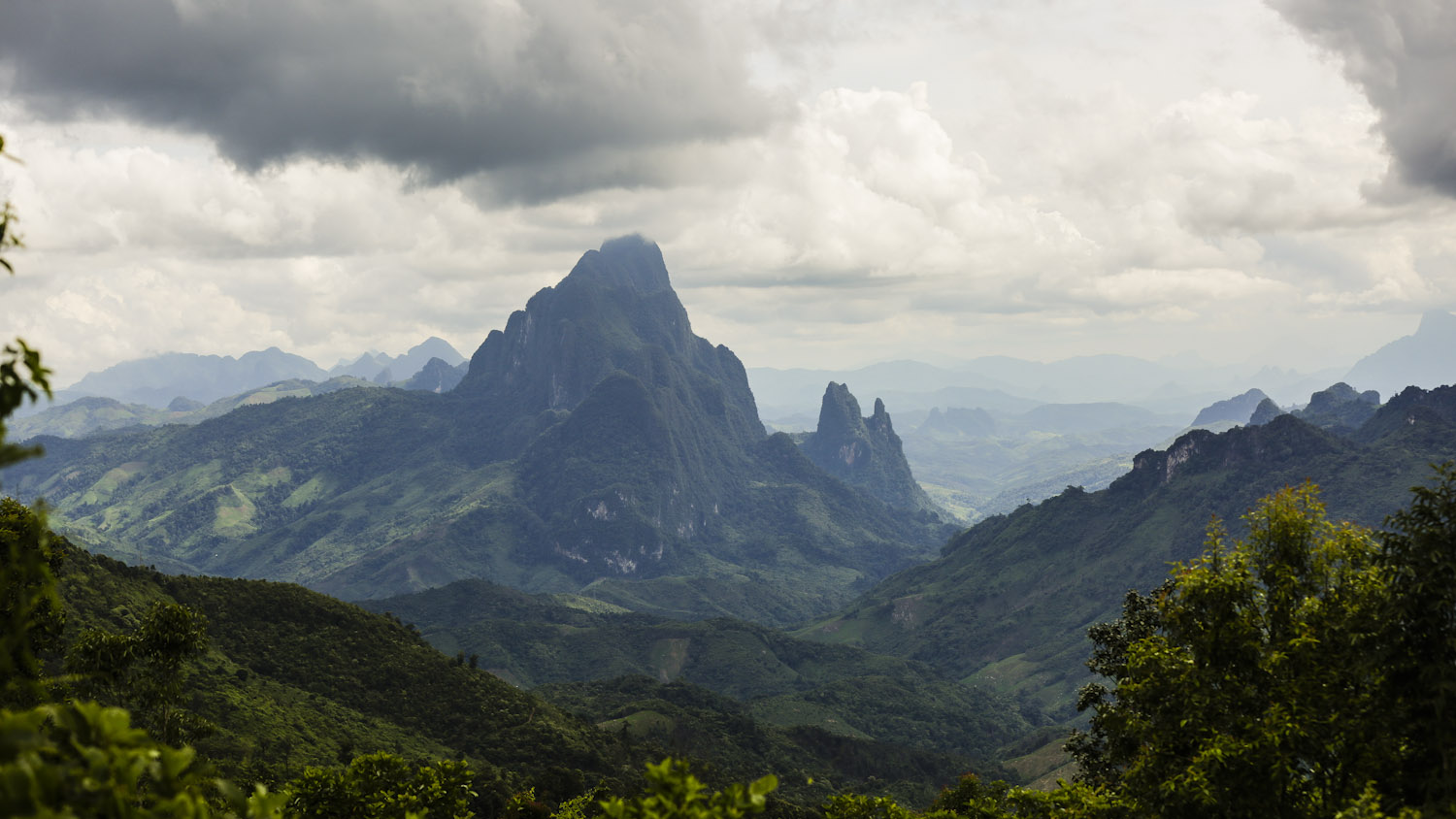 This landscape appears along the route from Luang Prabang to Vang Vieng. The first time we passed here, the weather was foggy and there was rain, so we didn’t see any of the mountains. But when a few months later we passed here again, coming in the opposite direction, we couldn’t believe that the landscape had all these mountains that we were seeing for the first time. 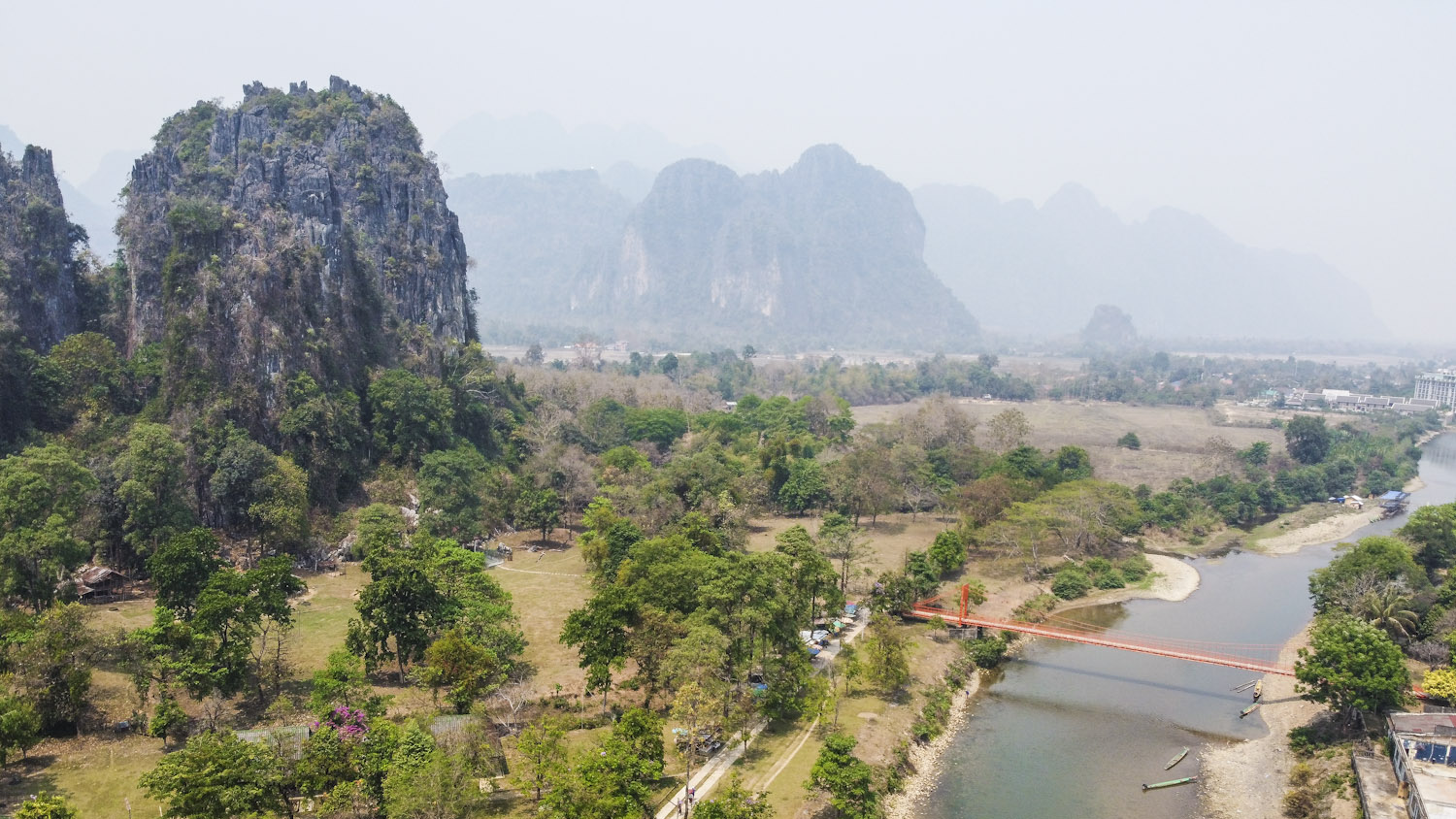 It doesn’t matter where you go in Vang Vieng, you are sure to see many karst mountains that drop out of the ground like castle mounts. You can climb to many of these outcrops for wonderful sunset views and many have also the most impressive caves in the country. 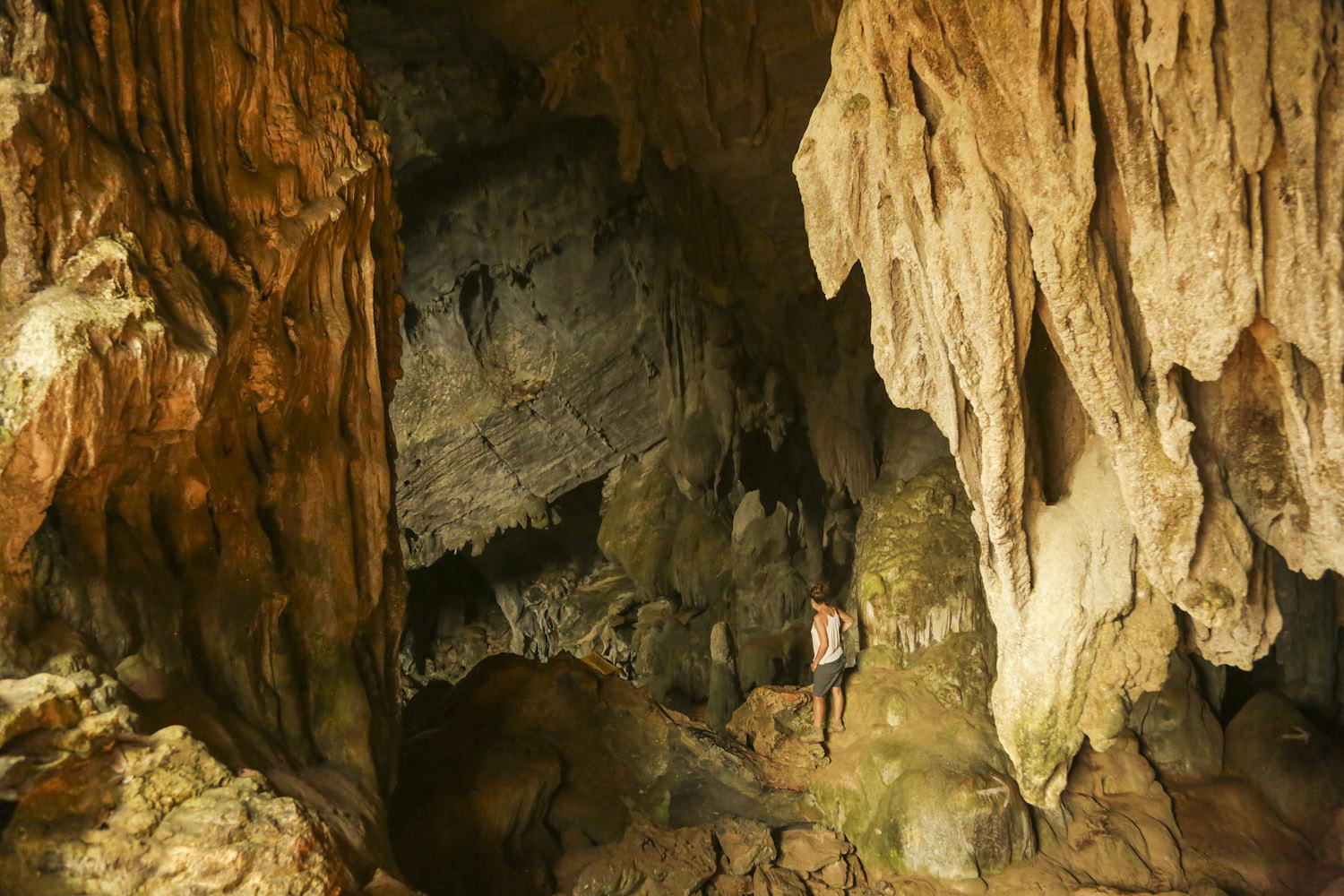 The Tham Phu Kham cave is one of the many impressive caves around he village of Vang Vieng. This one has got the particularity of having a three-metre-long statue of a reclining Buddha inside. It is worth the climb to the cave and after visiting the cave, you can also have a swim at one of the most beautiful lagoons of Vang Vieng. 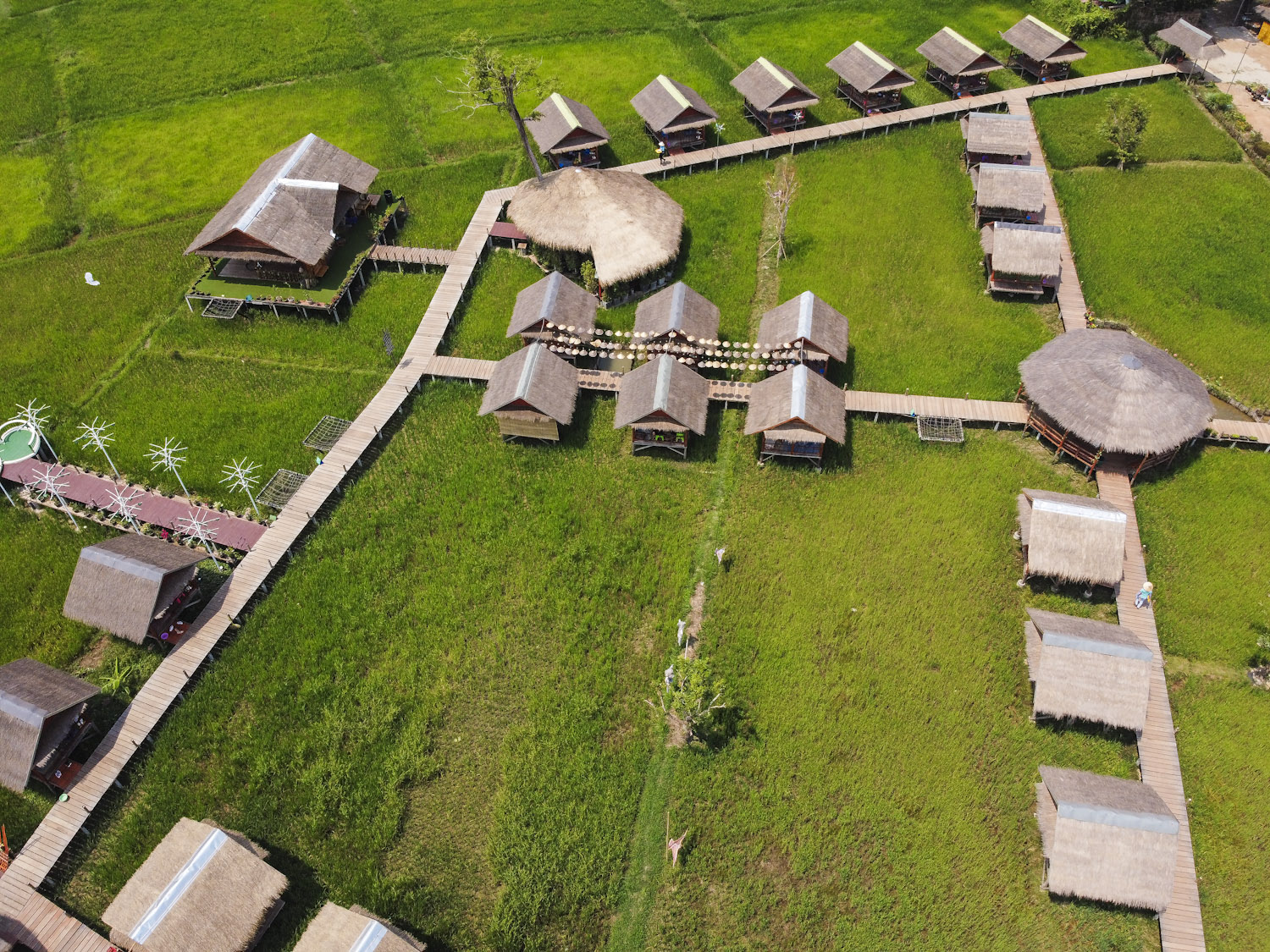 This kind of restaurant in which each table is set in a sala – a wooden or bamboo platform – is very popular in Laos. They are usually found in beautiful locations in the nature. They can be next to a river margin, on the river bed, or as in this restaurant, on a paddy field. Each sala offers some privacy, and is an individual room, where friends and family can spend not only the time to share a meal, but the entire afternoon. Having a siesta in the sala, after the meal, is also a possibility. 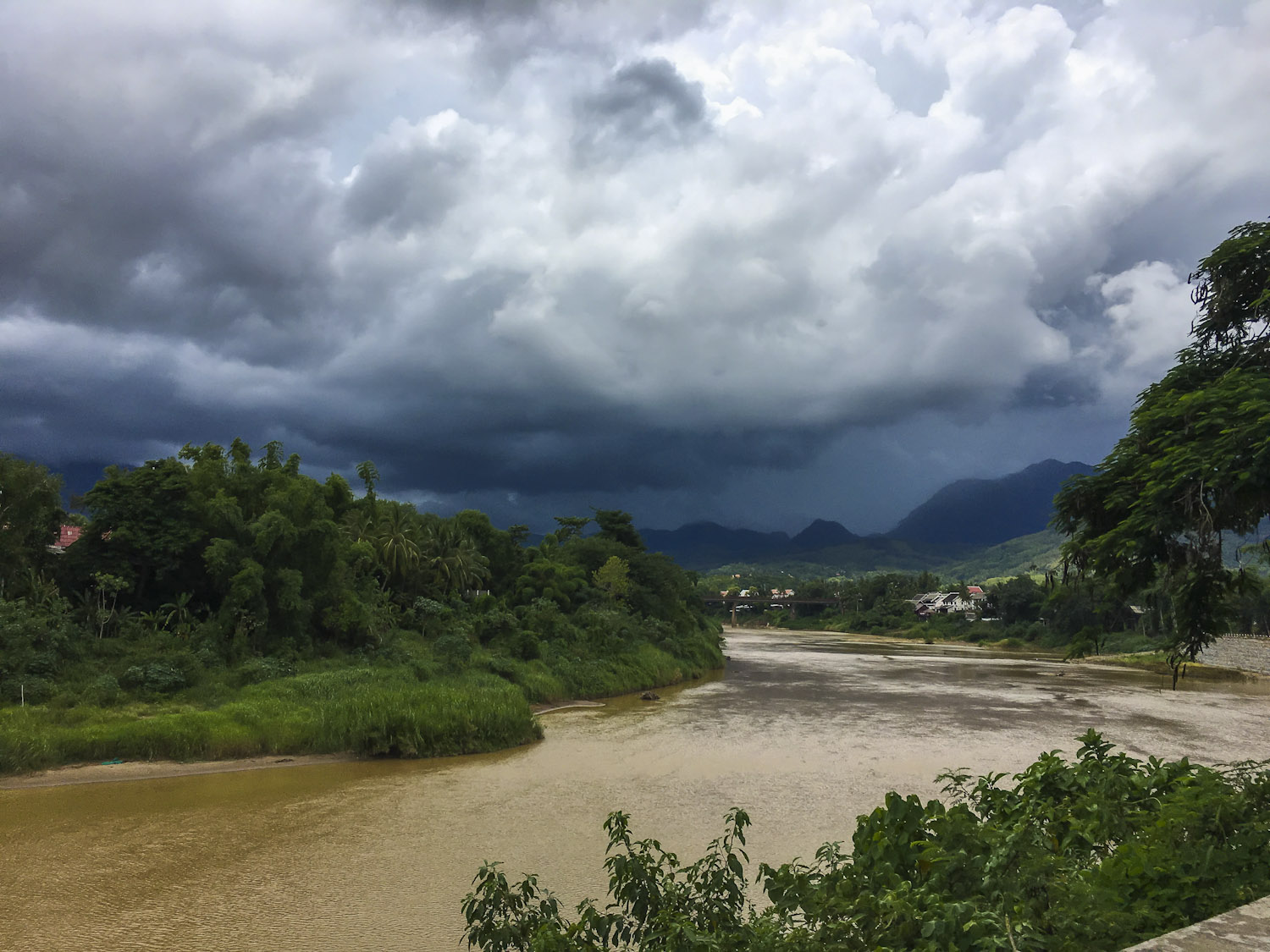 Luang Prabang is not only a beautiful city, it also has got many beautiful places in the wild nature. Take the time to climb Mount Phosi, in the city centre far great views of all the town and river. This viewpoint also gives an idea of all the mountains that surround the city. 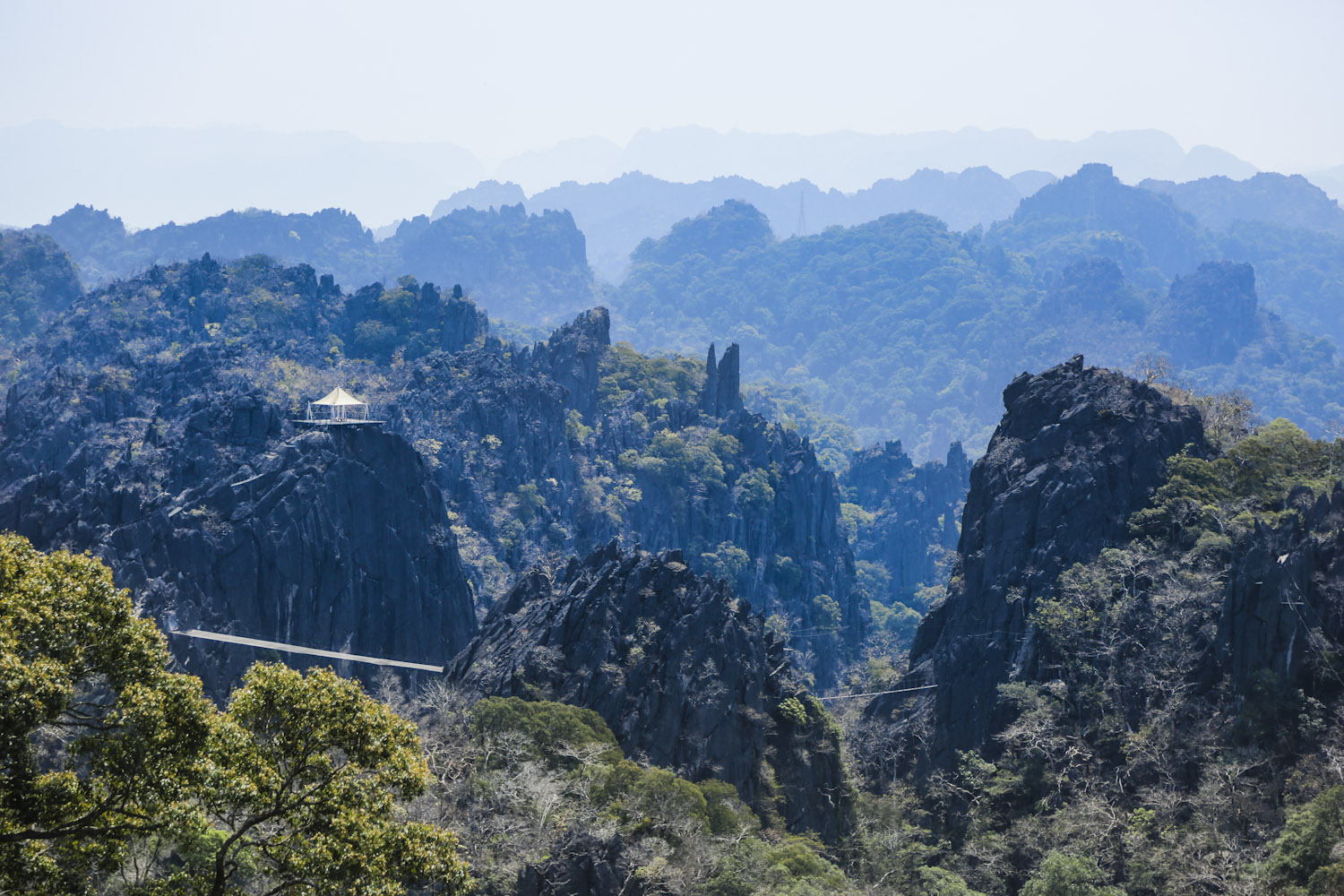 The last stop of the Thakhek loop is ‘The Rock Viewpoint’ that offers impressive views of the limestone forest. Those who seek an adrenaline rush can also try the new zip line, the hanging bridge and spider net that the viewpoint offers. 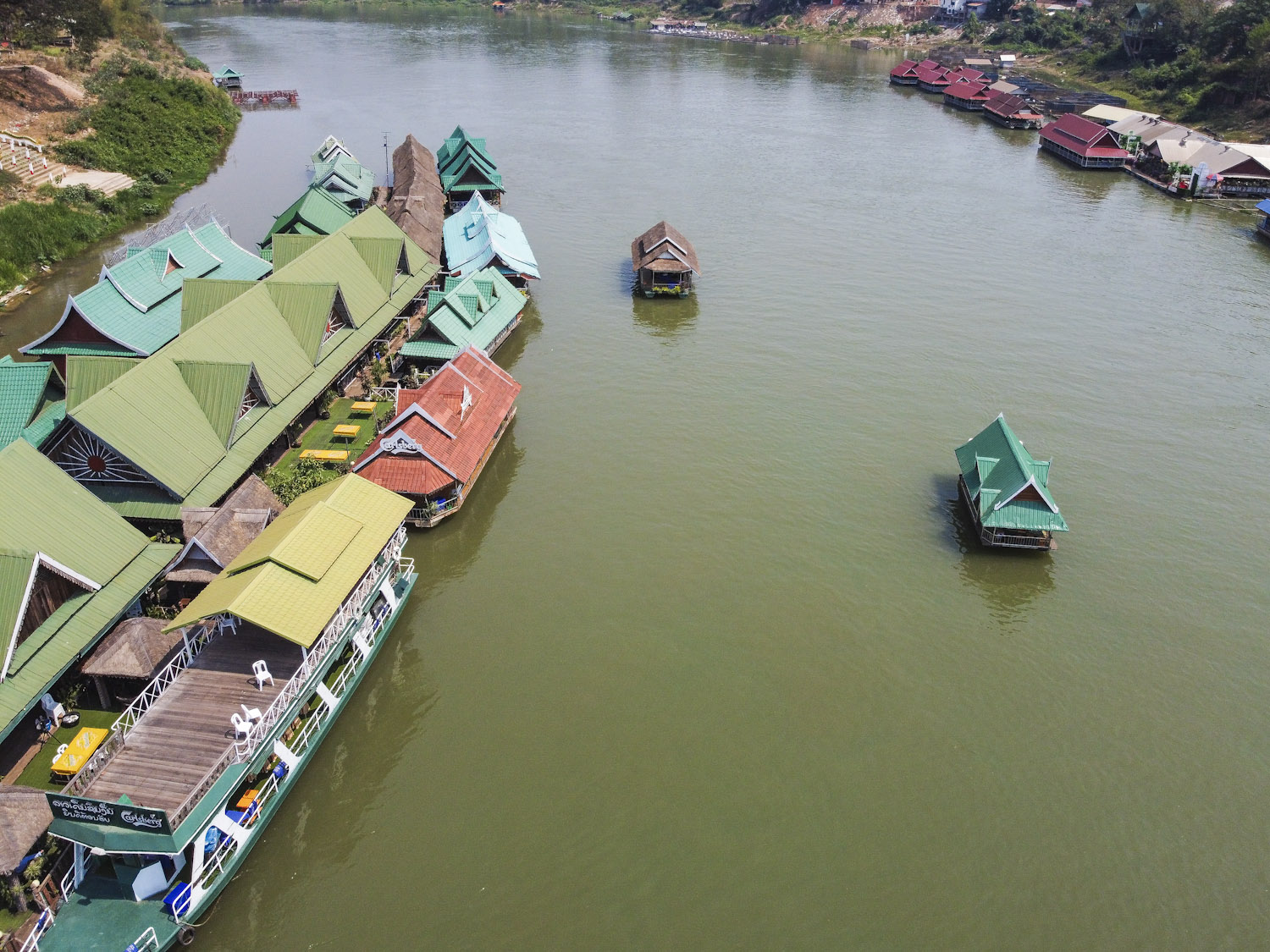 One of the favourites of Vientiane residents is a day trip to the Tha Ngon Floating restaurants. This is an activity which is typical Lao. Grab a group of friends and family and head to the sleepy village of Tha Ngon in the morning. Once you arrive at the bridge cross it and turn right, to go down to the river margin. This is where to find all the houseboats that can be rented after ordering the meal at one of the dock restaurants.

22. Tamarind Tree over the Mekong River 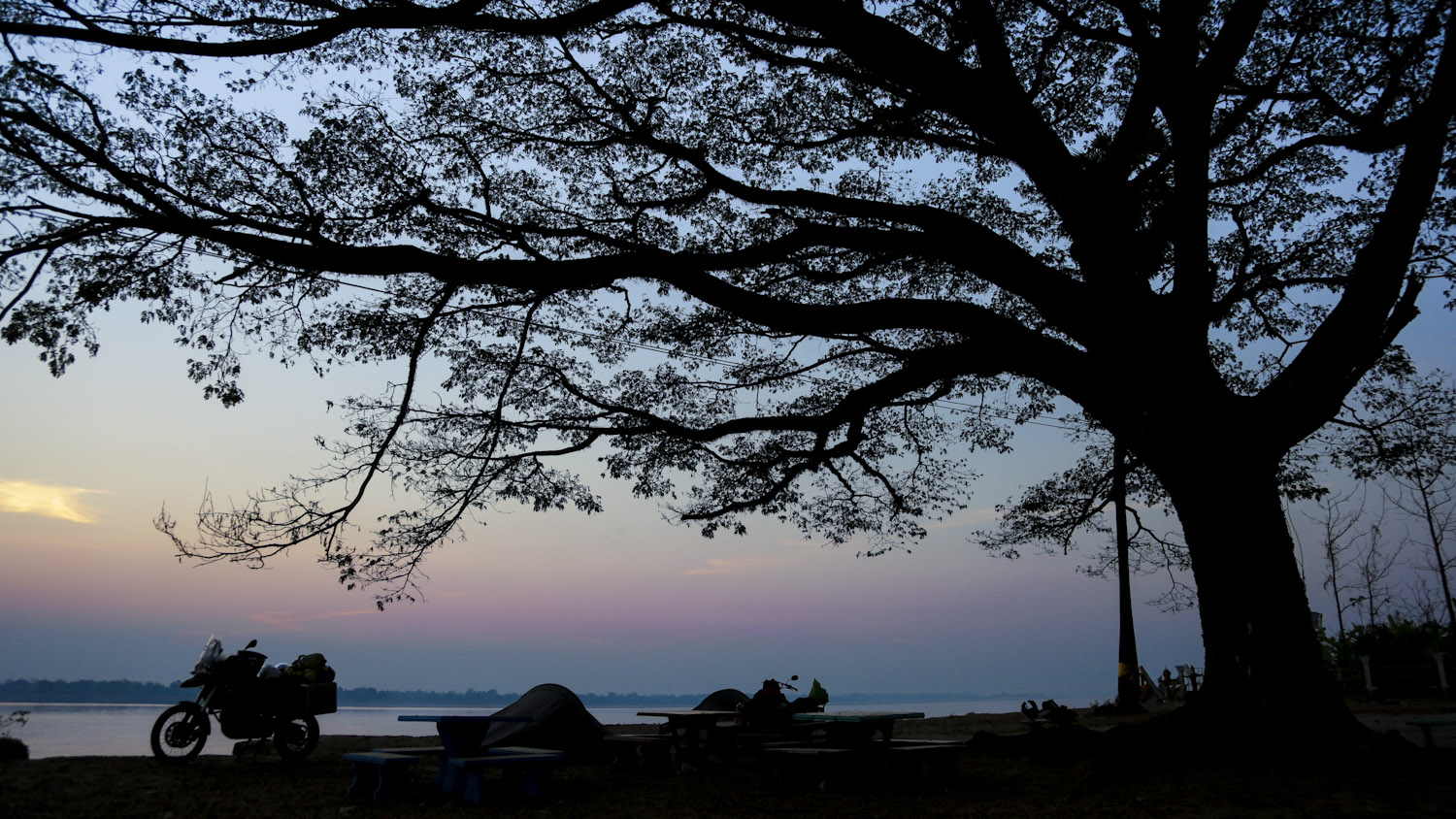 There are so many fruit trees in Laod and the amarind tree is one of the most beautiful ones. They are so big that many use its shade during the day. At night, we felt protected when we wild camped under a huge tamarind tree on the Mekong riverbank. 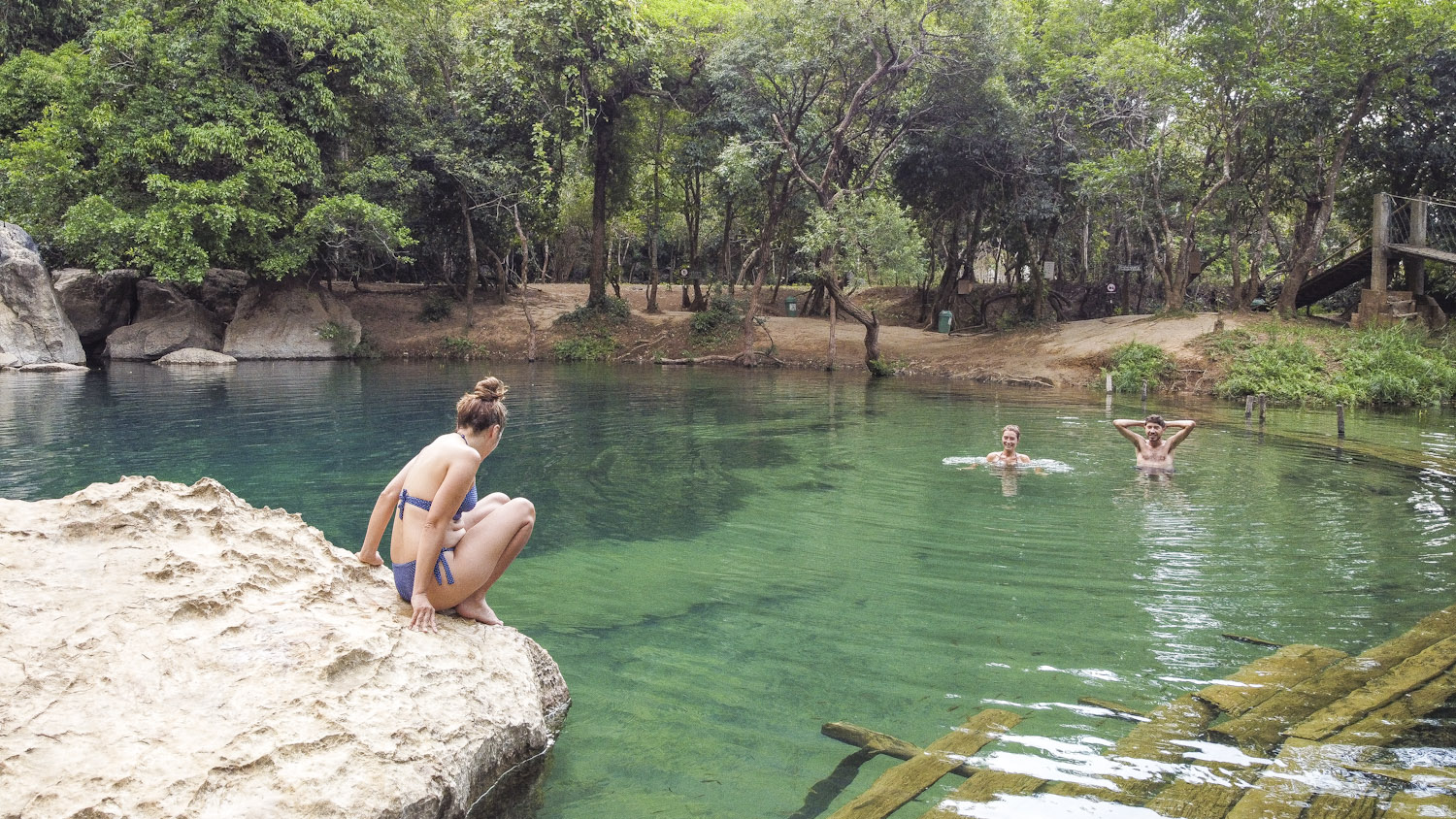 The gorgeous Cool Pool near the village of Ban Napavan was one of the best camping spots we have ever had. We arrived late, the pool was already closed but we asked the guardian if we could camp nearby. They allowed us to camp in the pool site and the next morning, we were the first ones to arrive and had the wonderful pool all for ourselves. 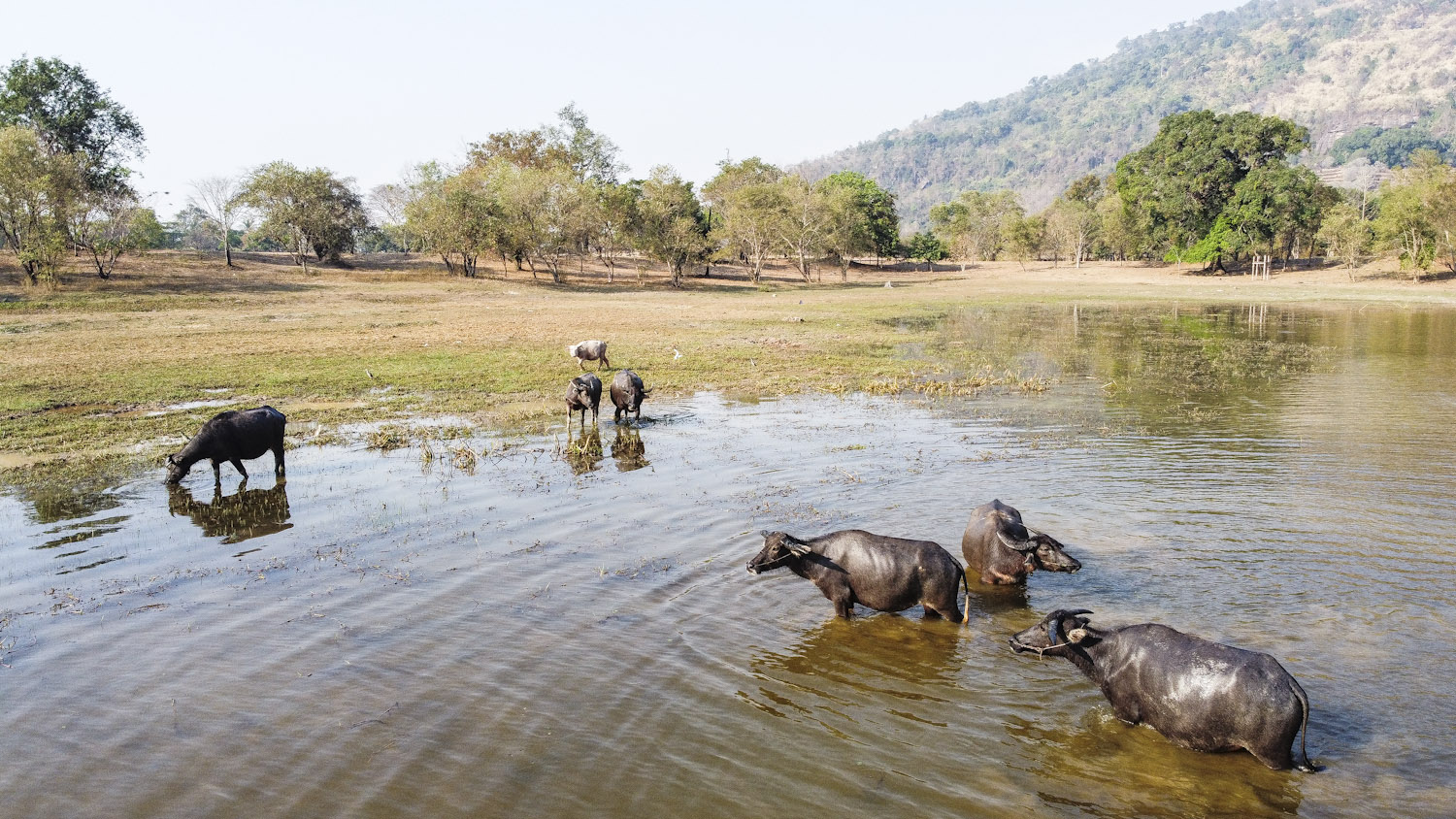 Champasak is better known for Wat Phou, the ruins of the only Khmer temple in Laos. Built in the same style as Angkor, it is older than Angkor Wat, having been built during the eleventh century. The premises are so large that they include the traditional barays (water reservoirs), where a herd of water buffaloes was enjoying the hot day. 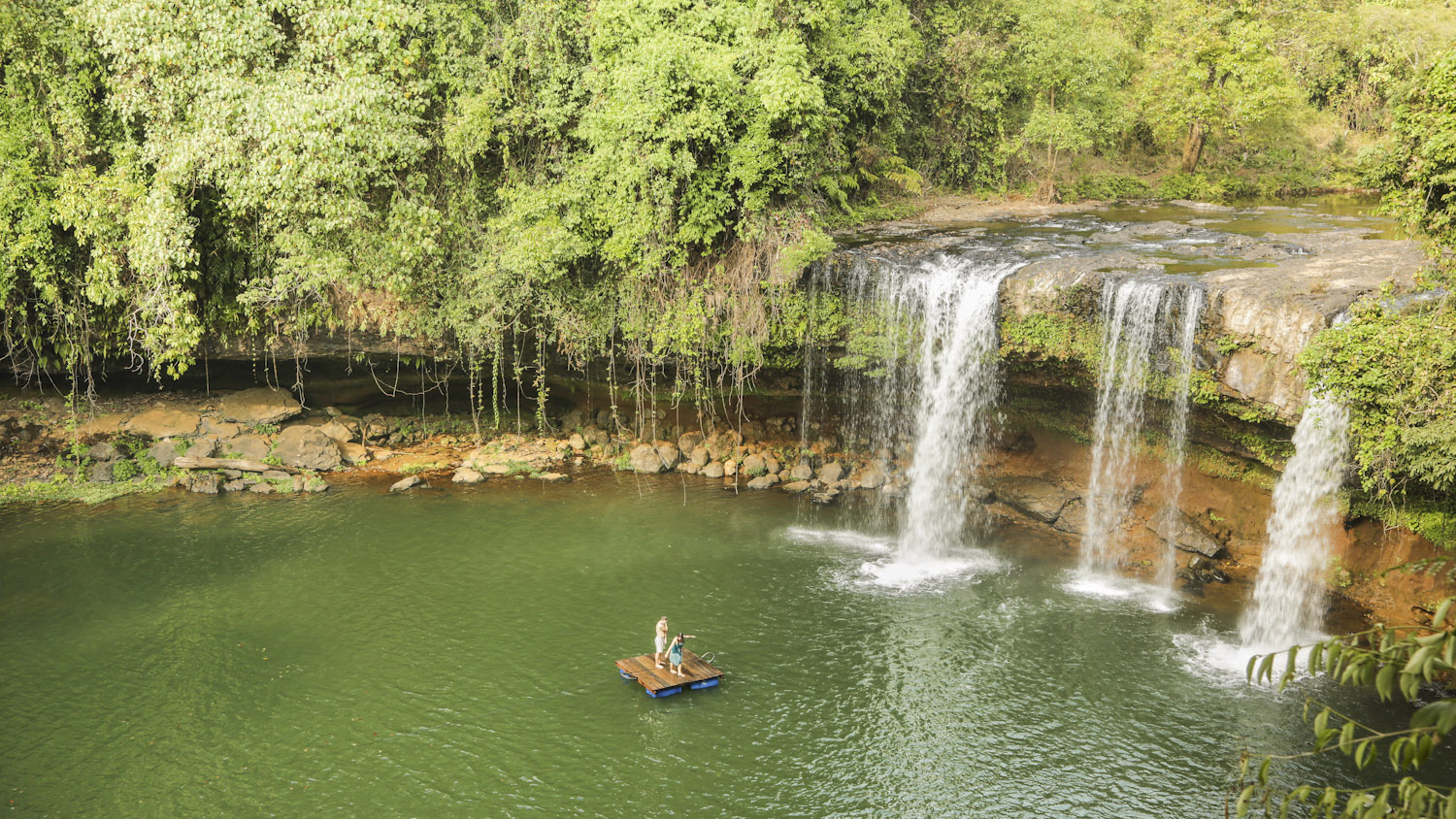 This waterfall is located in the Bolaven Plateau, between Pakse and Paksong, opposite the equally famous twin Fane waterfalls, with their 120-metres-high cascade. The beauty of Champee has to do with its long gully that drops vertically to create a beautiful green pool where one can quietly bathe. As it is surrounded by green vegetation, it looks like a paradisiac waterfall. 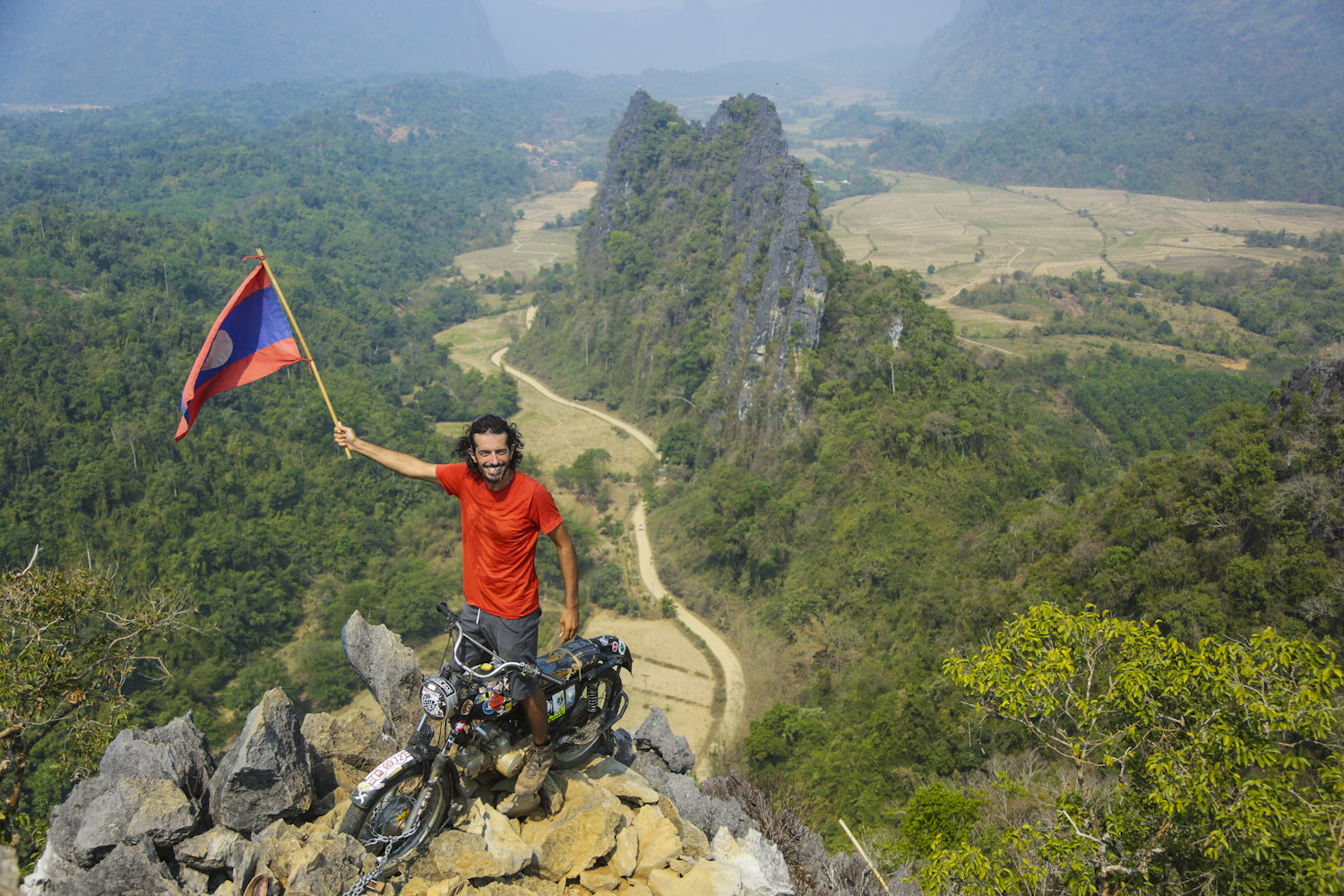 Jorge sitting on one of the two motorbikes that were taken to the top of the Nam Xai viewpoint. In Laos, many of the natural attractions (caves, lagoons, waterfalls or viewpoints) are private businesses run by local families, who improve access or build infrastructures (such as toilets or bars serving drinks) in these places and then ask visitors for a small entrance free. It is very little for the visitor, but it makes a difference for these families. In Vang Vieng, there were so many amazing viewpoints, that this family decided to make theirs a special one, so that visitors would choose to trek to their viewpoint in particular.

>> Try our TRAVEL QUIZ ABOUT LAOS for more information and photos about this country. 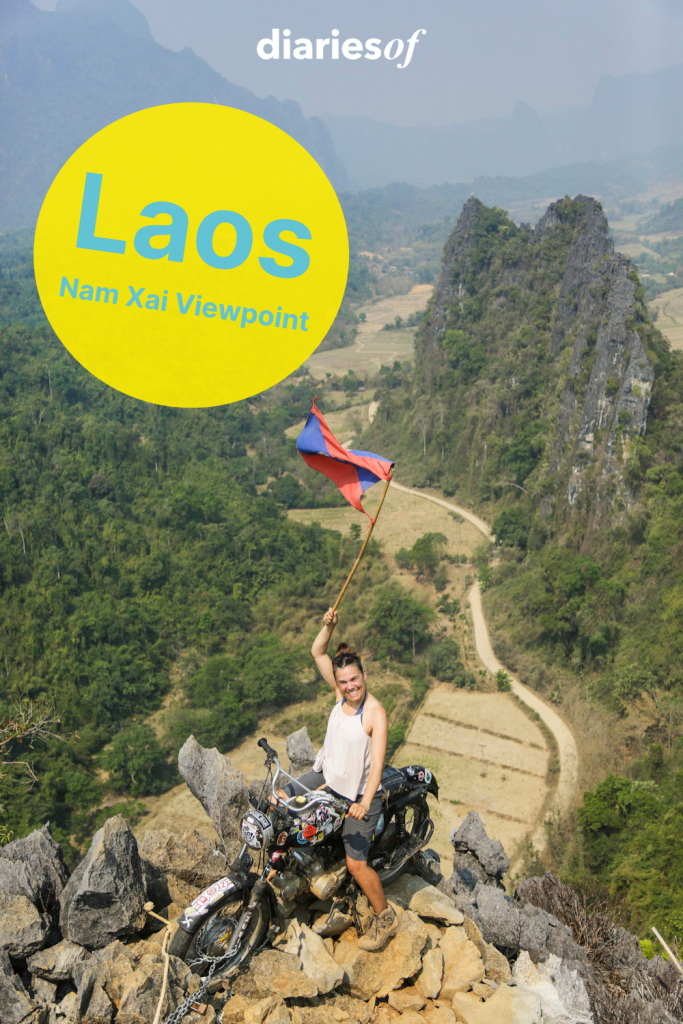 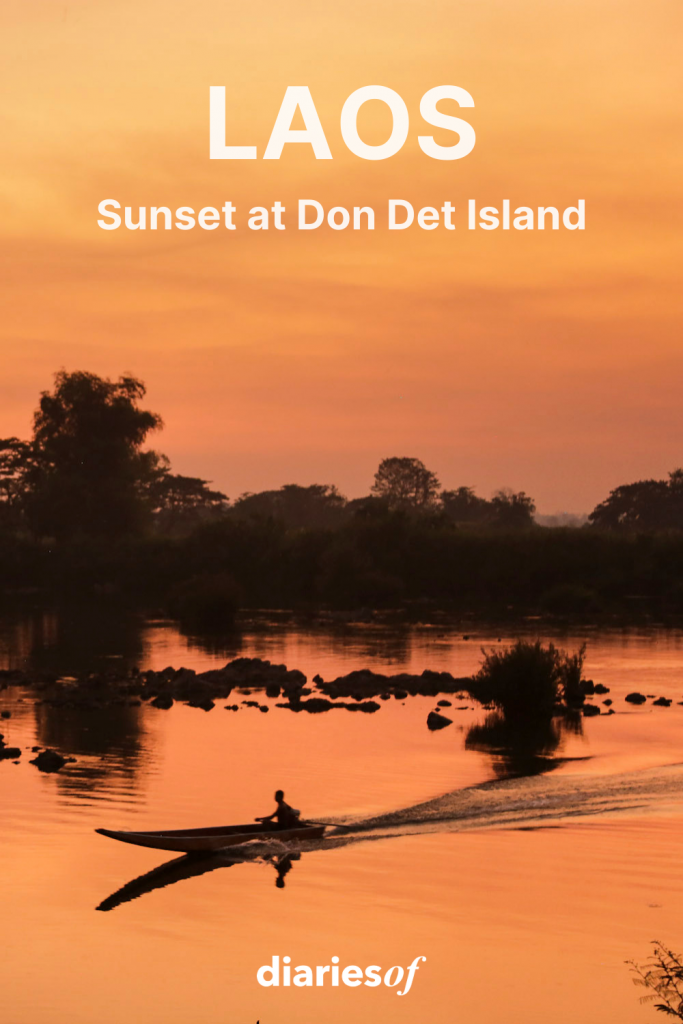 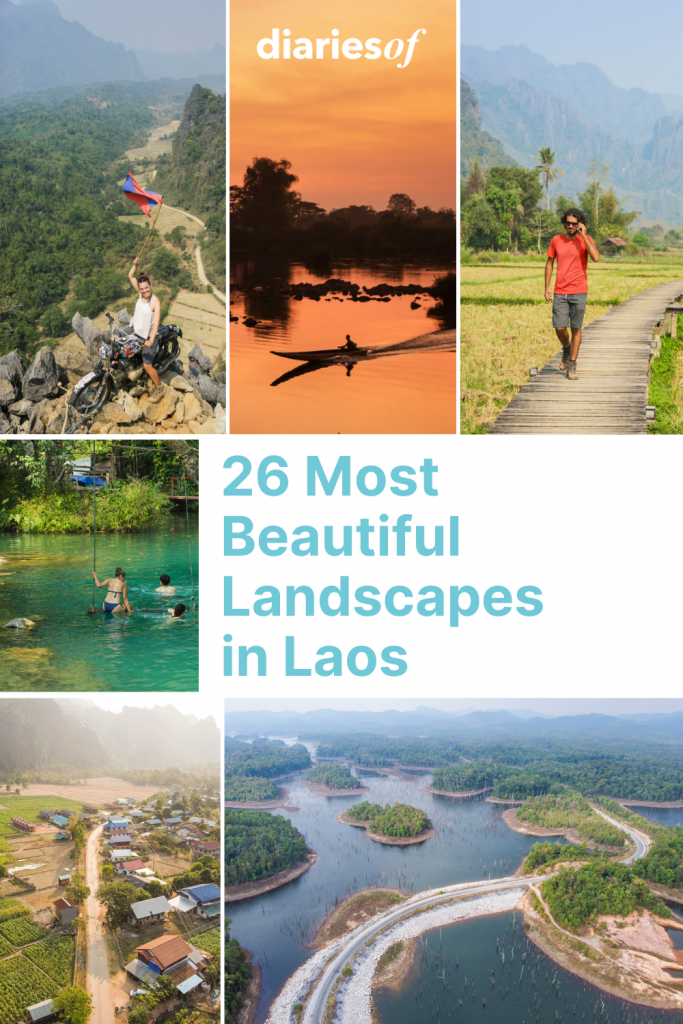