Incredible India! ‘You love it or hate it’. This is what people told me before the trip. For me, it seemed pretty obvious that I would be one of those who would love it! With all the fascinating stories I had heard about this country, the rich culture, the good food and last but not least the popularity of yoga.

Arriving after a 12-hours-flight from Australia I very quickly found out what it means to be in one of the most populated countries in the world. The population of Delhi alone roughly equals the total population of Australia! And this is particularly visible on the road. But it’s not just the density of the traffic, it’s also the ‘diversity’: big Toyotas, trucks, bicycle rickshaws, cow-carriages… everything is intermingling, giving a first idea of the extent of the social divide in India. 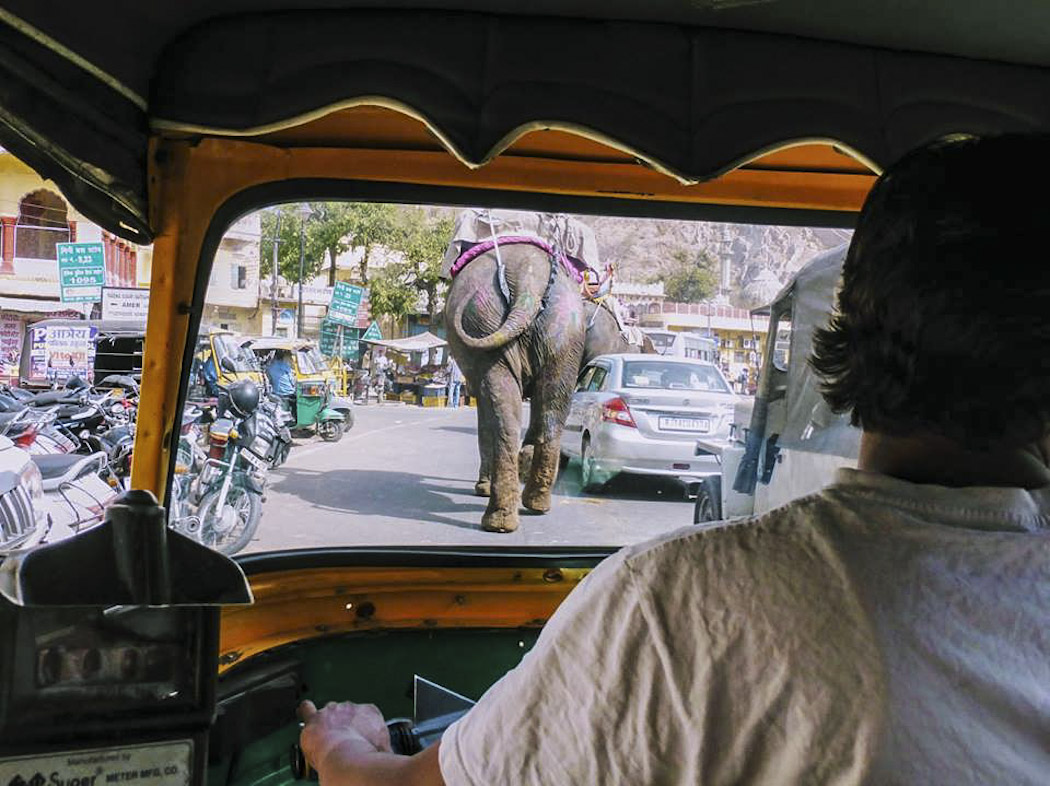 The most — or maybe the only — respected traffic rule seems to be the one painted on many trucks and rickshaws: ‘Horn OK Please’, making even a small street or residential neighbourhood an incredibly noisy place. So, after just some hours in India, I realised that I would definitely need a big portion of yoga practice if I wanted to stay somewhat relaxed in this vibrant and rather chaotic environment! 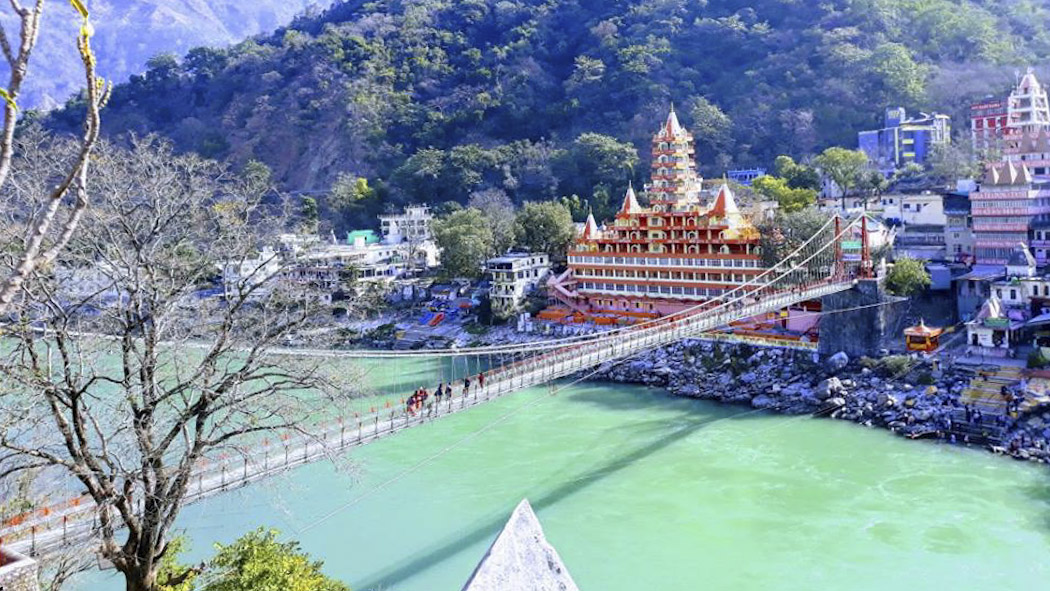 First destination: Rishikesh, the ‘yoga capital of the world’, ‘gateway to the Himalayas’ and most importantly a famous pilgrimage town for Hindus. The river Ganges flowing through the city is considered holy and worshipped as the goddess Ganga. Not just the river is holy, also the numerous cows roaming through the city. 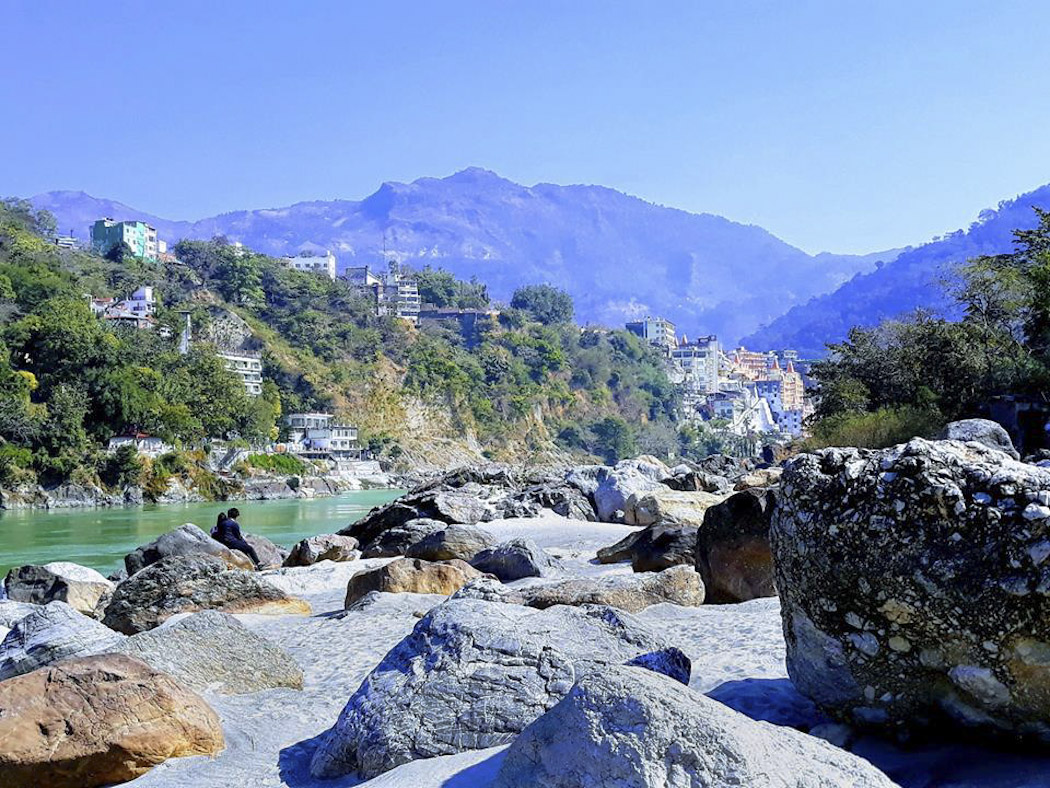 Giving food to animals – no matter if it’s a dog, monkey, fish or cow – is believed to improve one’s karma. And in Hinduism, a good karma not only positively influences the current life, but also the following ones. 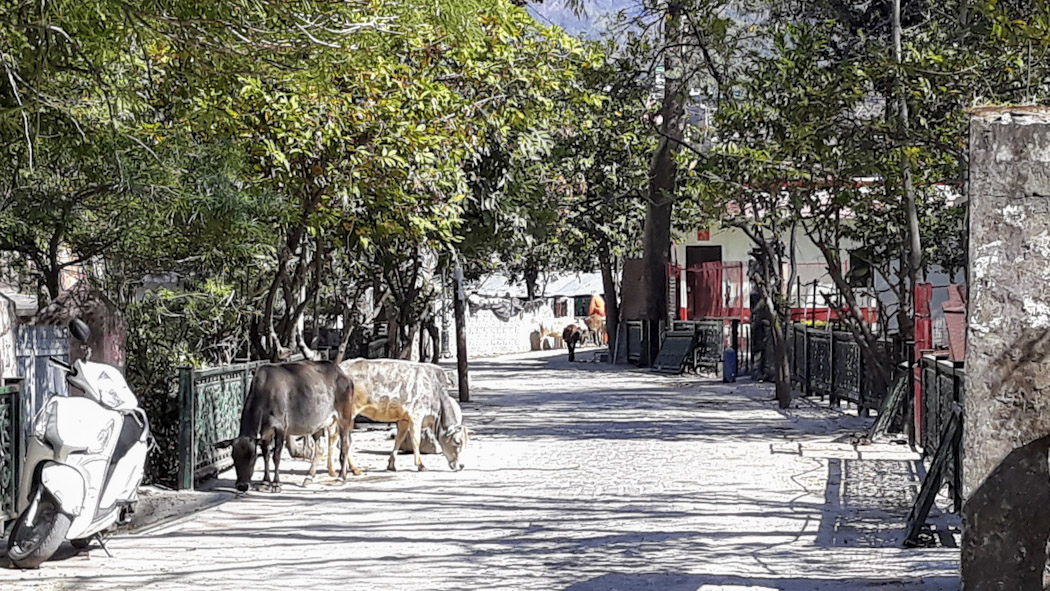 Our German friend Dieter involuntarily sacrificed his freshly bought chocolate croissants to an insistent cow, that had stepped on his toes when he wanted to keep food for himself a previous time. 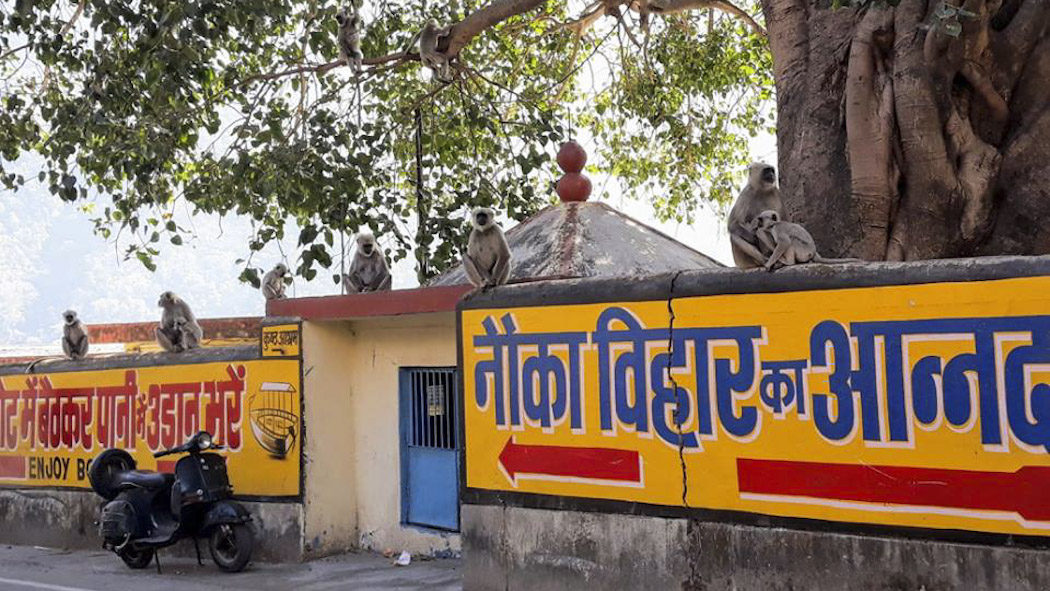 A Norwegian lady, that happened to sit at our table in the ‘Pure Soul’ cafe, convinced us that our first misadventures – a monkey trying to steal my bag and a scam in Delhi – were due to our bad energy, and that it was clearly time for us to go to a ‘Satsang’. A kind of sit-in with a Brazilian guru that many hundreds of Brazilians had come to Rishikesh for. Not sure if one hour of chanting and some potentially wise words from a guru directed towards a crowd of international tourists improved my energy. If not, this was probably because the guru was rated only 1 out of 5 stars (1 star = to avoid) on a guru-ranking-website that I found later! The Norwegian lady had already changed guru when we met her a second time. 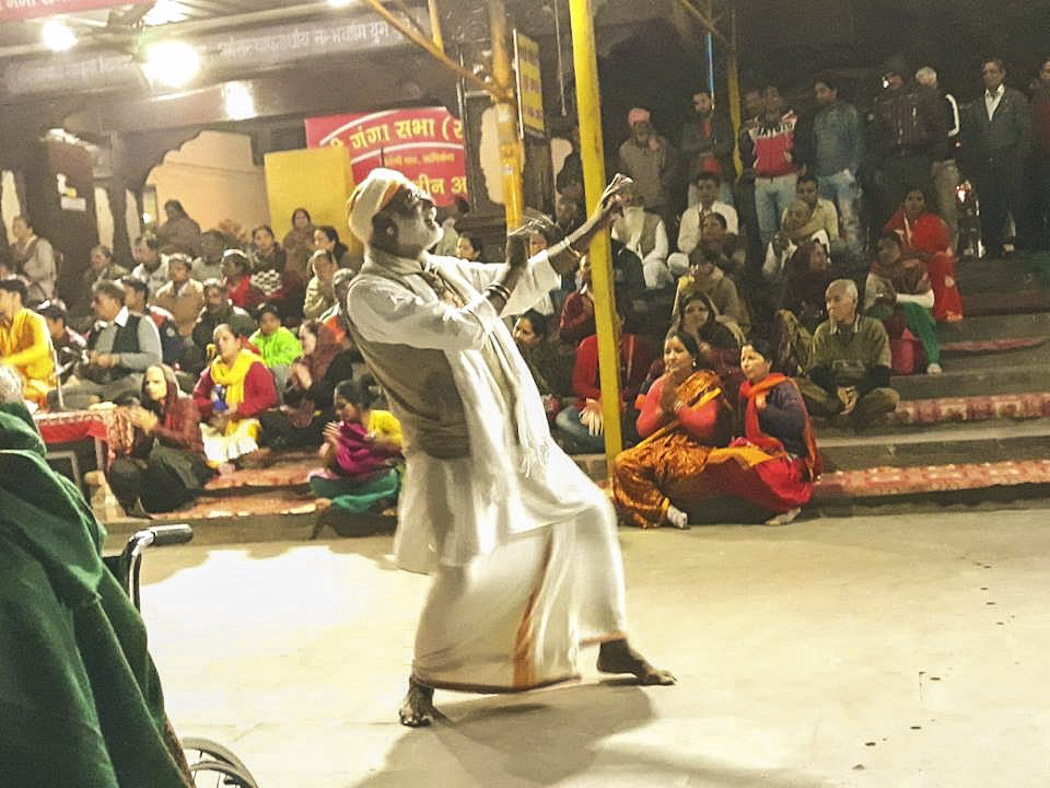 Much more impressive than my guru-experience was what I had been looking forward to for a while: a trip to the mountains. Just some kilometres away from the city, going higher up, I found a big contrast to the noisy, crowded cities: first mountain ranges with views on the still snow-covered Himalayas, topped with small temples that fulfilled all my criteria of a spiritually rich place. 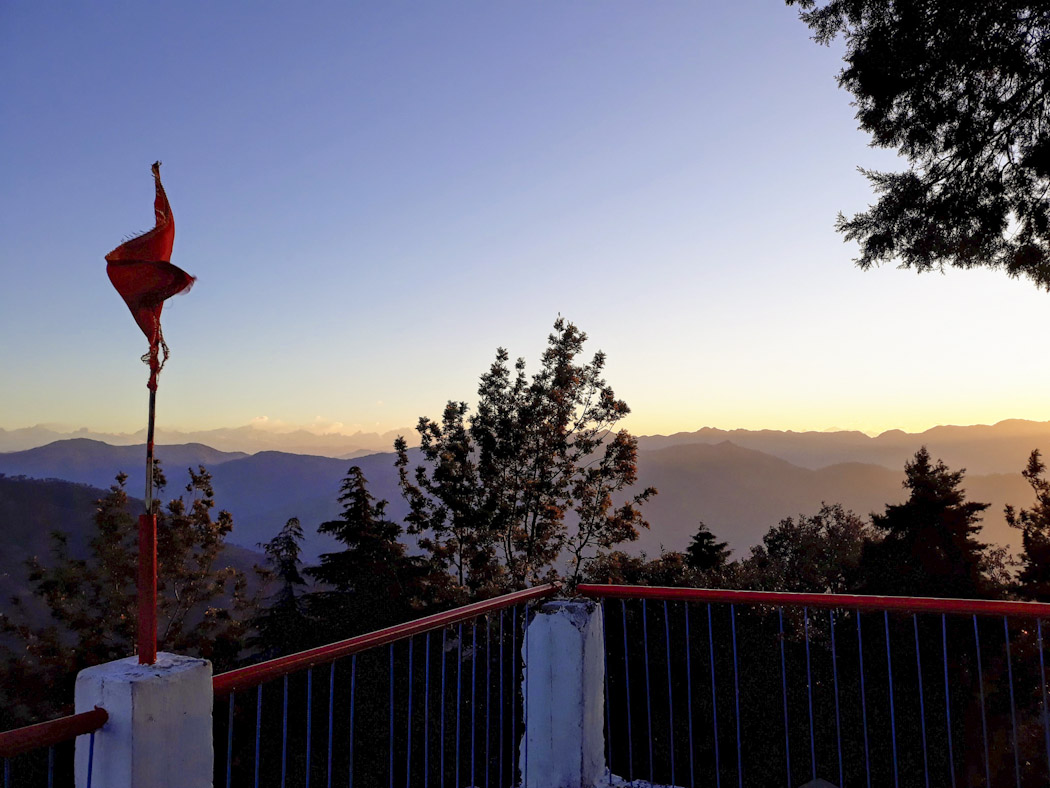 The freshness of the air, a good cup of hot tea, the tranquility, the sound of the typical bells which are supposed to calm down the mind… Very special places that finally made me feel like it was really worth the long trip! And that clearly deserve to be discovered more. A big thanks to Raj, our hiking guide! 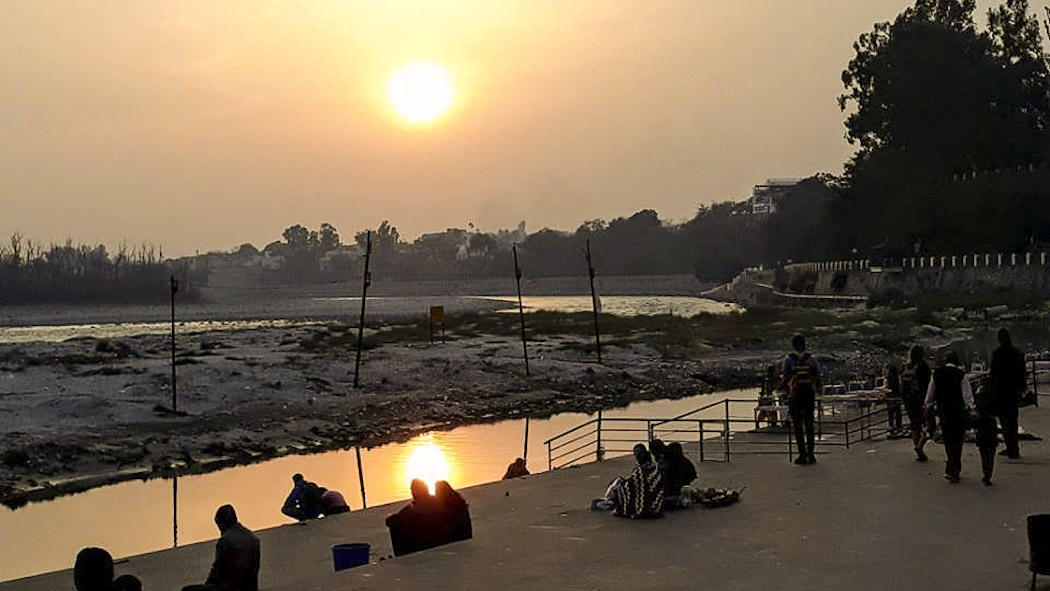 There’s so much more to tell… between my first rafting experience, my toughest yoga classes ever, the worshipping ceremony at the Ganges, the striking poverty in some places, the impressive and mystical Taj Mahal in Agra, the huge elephants walking up to Amber Fort in Jaipur, the first chicken dish after two weeks in Rishikesh where meat and alcohol are prohibited by law, meeting equally fascinated and tired tourists, my nearly started Bollywood career, the clothes that came out green of the laundry shop, meeting our new friend Renata, my 5 min stuck in a yoga room with a monkey, the lovely Indian couple that helped us find our bus,…well… let’s say that this was just a very brief introduction  🙂 Let’s see what the next chapters bring! ‘Love or hate’ India… I would say none of it… or both… depending which India you are speaking about!

Written By
Antje Mengel
More from Antje Mengel
Incredible India! ‘You love it or hate it’. This is what people...
Read More