Mongolia was the first Buddhist country we ever visited, therefore, we had to make some research to understand a few of the things we saw and experienced. Here is a résumé for an overview of some of the symbols, items or structures used in Buddhism.

Most Buddhist shrines were destroyed in the 1930’s, when communist revolutionaries took power, and all religions were suppressed. A few monasteries, however, have been spared destruction. Here are a few of our favourite temples in Mongolia: 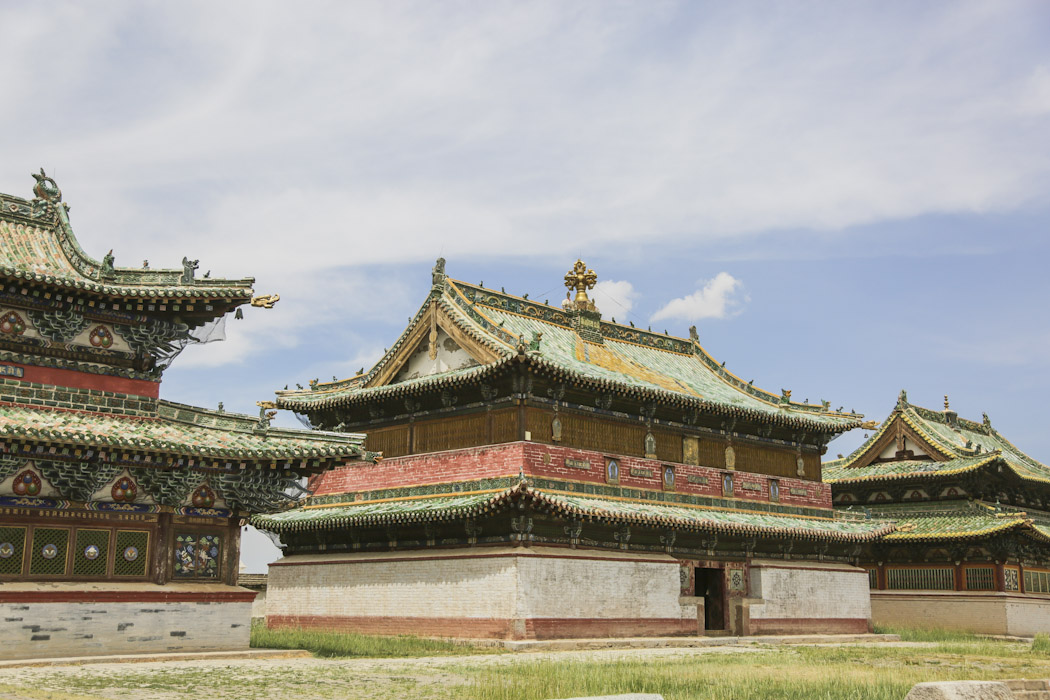 The Erdene Zuu monastery is located in Kharkhorin. This beautiful complex of temples is probably the earliest surviving Buddhist monastery in Mongolia. It survived the first destructions that took place in the 30s and later, under Stalin’s regime, it was kept as a museum and as a proof of socialist’s tolerance to religious diversity. In 1990, after the fall of Communism, the monastery became again a place of worship, and it is also a well-preserved museum. 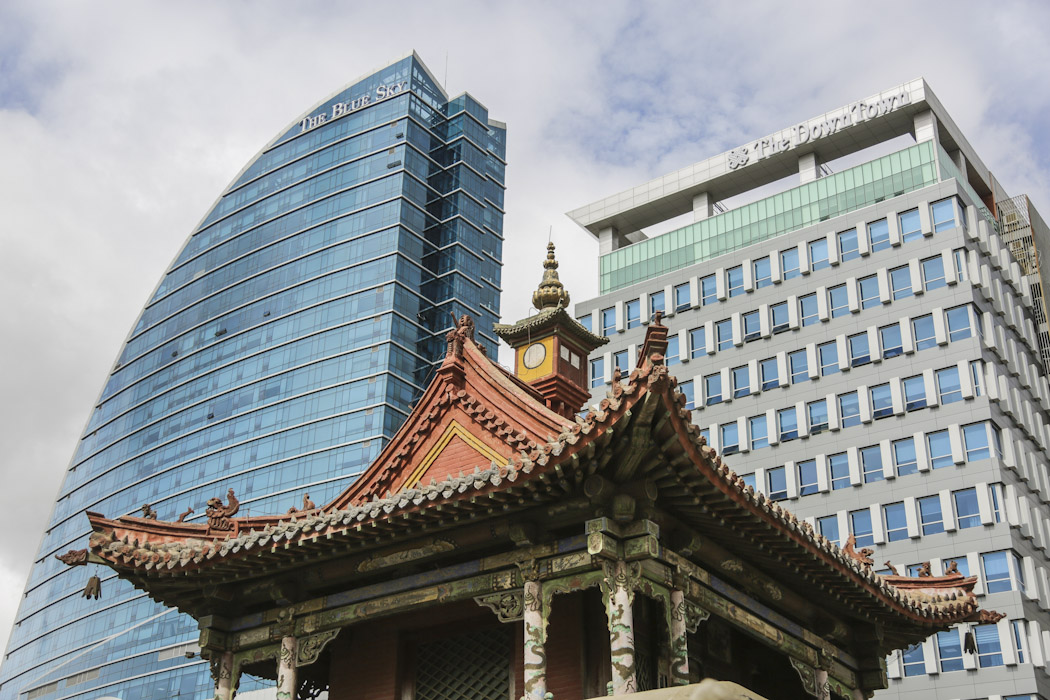 The complex of six temples which were constructed in 1904. During the Communist era, it was kept as a museum, therefore it survived the destruction. Nowadays it still serves that function. What is impressive about this temple is that it is surrounded by tall and modern buildings all around it. 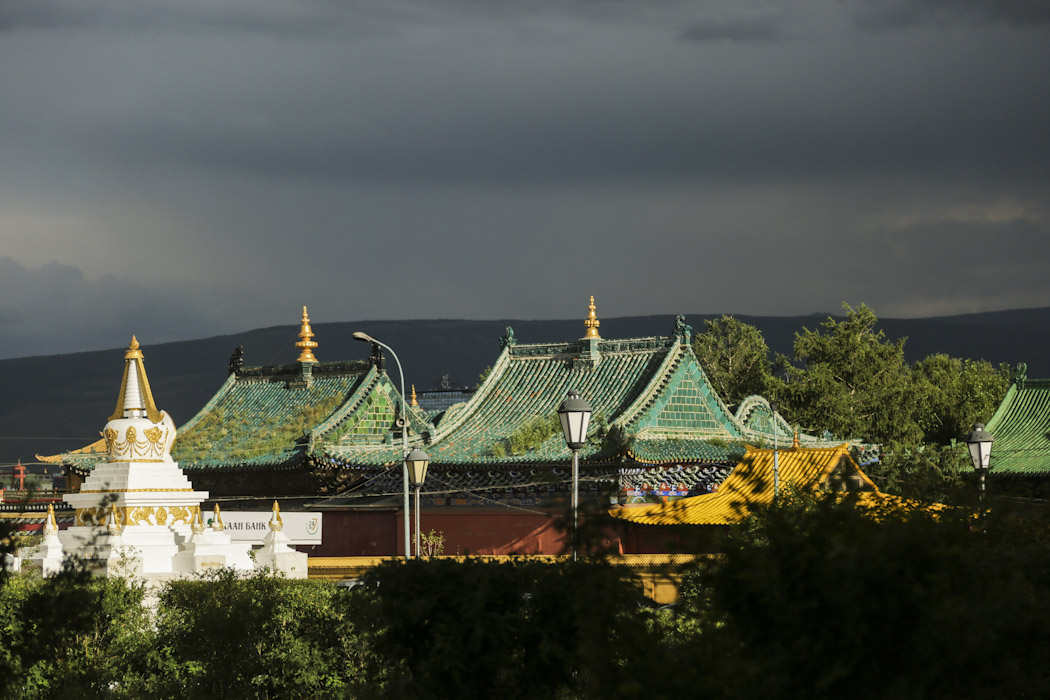 This large complex of temples was constructed in 1809. Like most temples in Mongolia, this complex was severely destroyed and it has been revitalized since the 1990’s. Nowadays, it is the most important monastery in Mongolia, with more than 150 monks in residence. Its name translates as the ‘Great Place of Joy’. 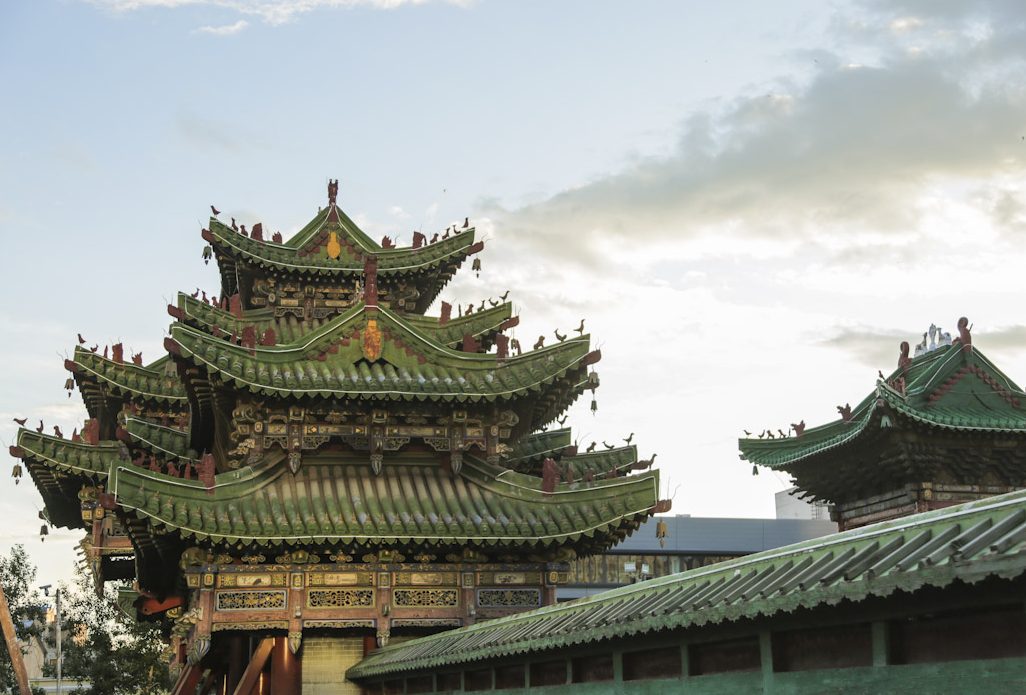 This palace is one of the oldest and best museums in Mongolia. It was built between 1893 and 1903, and it was not destroyed by the communist forces because it wasn’t a temple although it was somehow connected to religion. This structure used to be one of the residences of Bogd Khan, who was the spiritual leader of Outer Mongolia’s Tibetan Buddhism.

Mongolian Buddhism – What to Know: 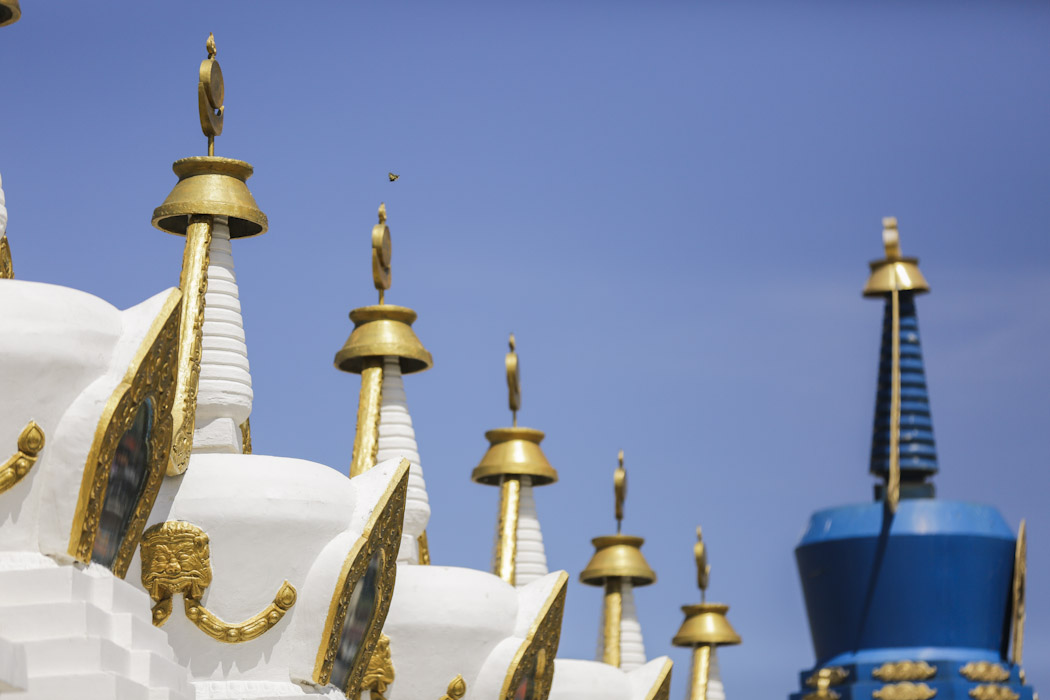 Stupas are hemispherical structures painted in white and with golden and blue motifs. The large ones (large enough for people to get inside them) are used as rooms for meditation and praying, while the smaller ones can contain relics (such as the remains of Buddhist monks) or other symbolic objects. 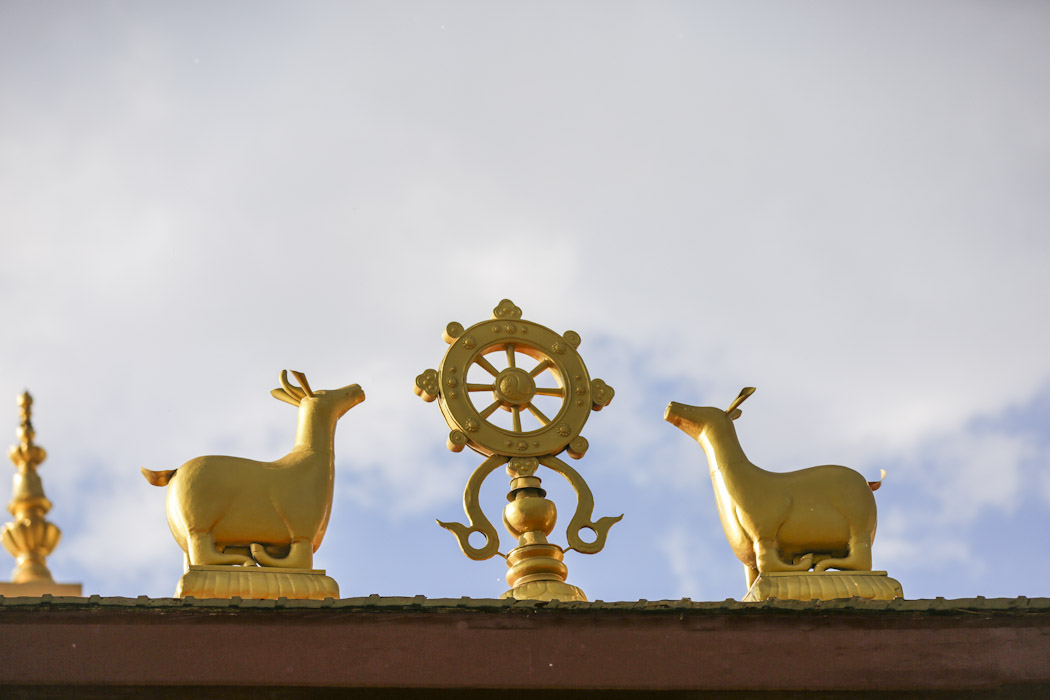 The eight-spoked dharma wheel represents the Eightfold path of Buddhism. For that reason, this symbol is present a the entrance of most temples, but also everywhere else with the slightest connection to Buddhism. It appears in paintings or carved in objects near Buddhas and the other deities. 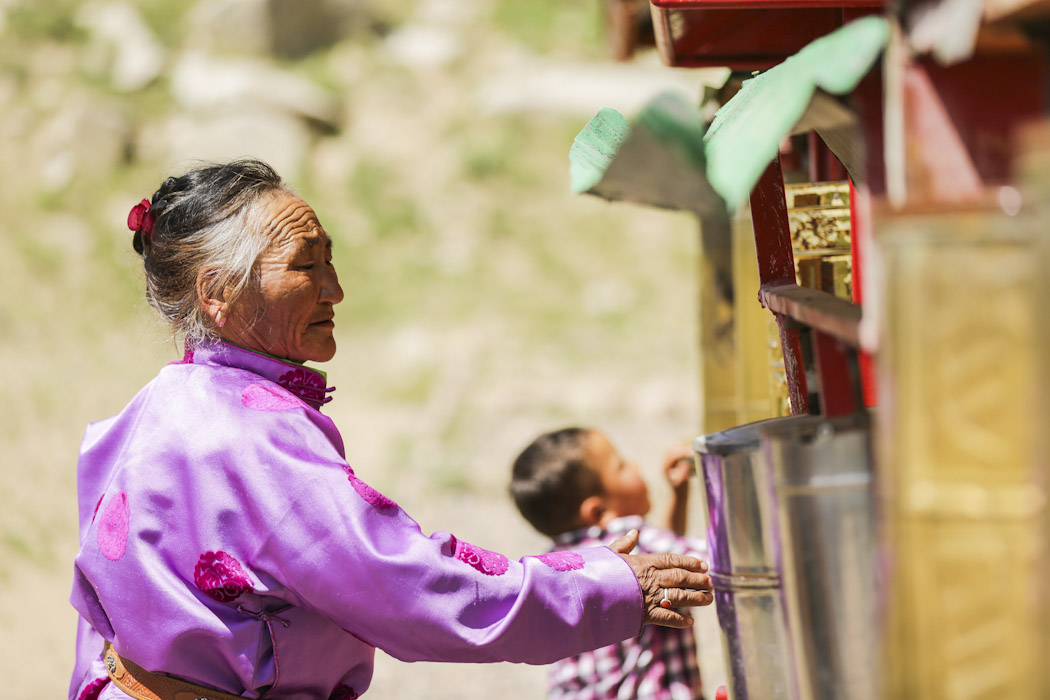 Prayer wheels are found outside of temples or stupas. They are cylinder wheels often made of metal (but occasionally also in wood or leather). The core of the cylinder is filled with mantras or prayers from worshippers. Worshippers pass near the prayer wheels and make them spin. The idea behind this gesture is that spinning the wheel provokes the same effect as reading the prayers from books. Wise system. 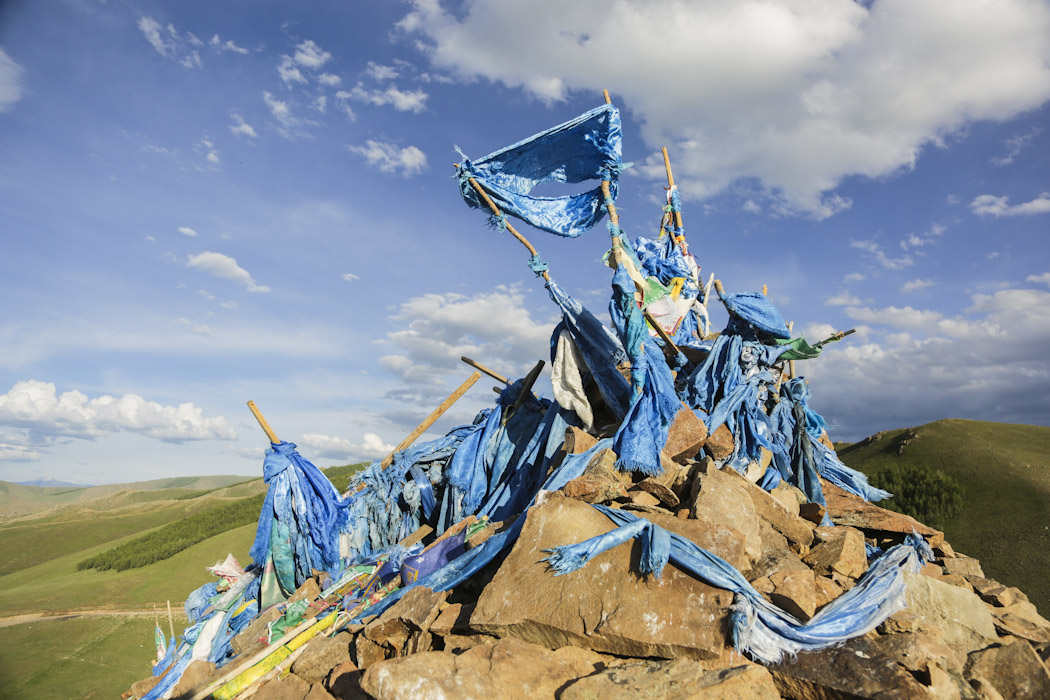 Ovoos are kind of altars made by heaping stones to create a pyramidic structure. They are found a bit everywhere in Mongolia, but especially in higher places (such as in mountain passes) because they serve to worship Heaven. This kind of structure is a good example of shamanic influences over Buddhism. Worshippers come here to pray and to leave many offers (such as coins, bread or small statues and blue khatas). 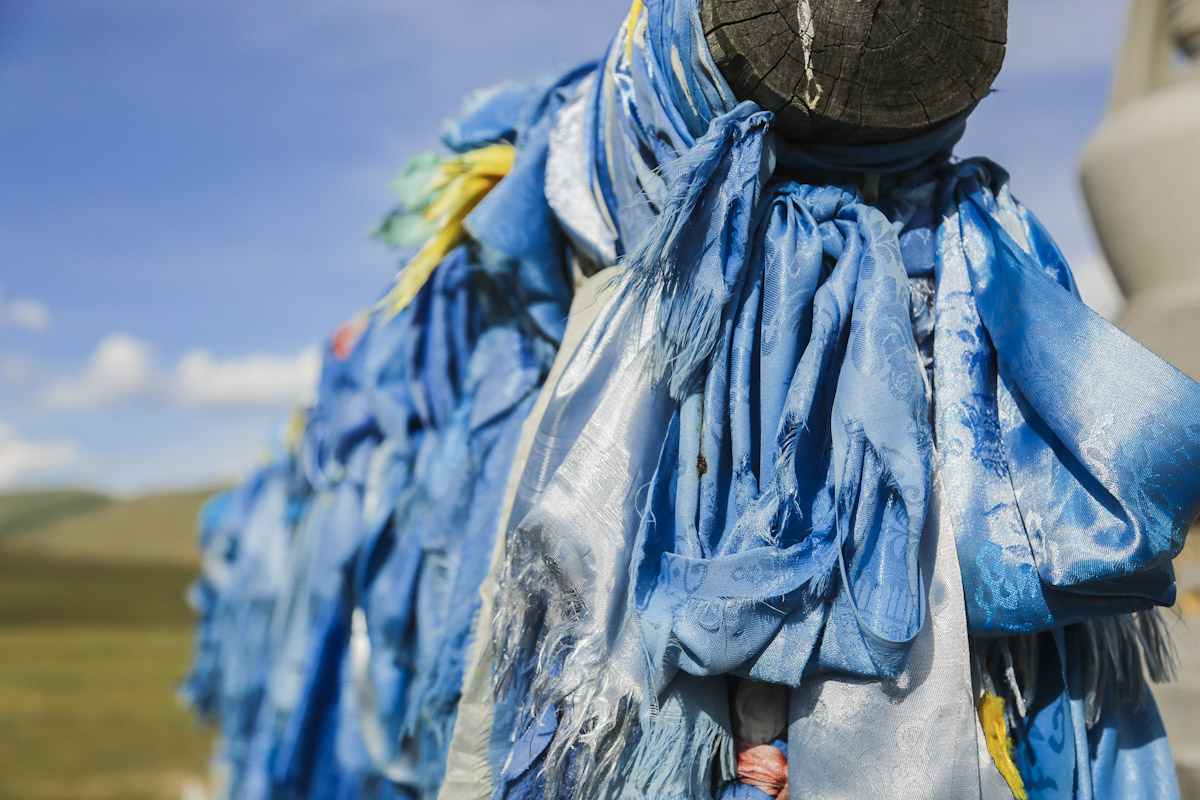 Khatas are ceremonial scarves in Tibetan Buddhism. In Mongolia, they are usually blue (as a symbol for the blue sky). They are usually used as an offer in ceremonial occasions, and therefore they appear wrapped to ovoos or in other holy places, such as in prayer wheels or stupas. 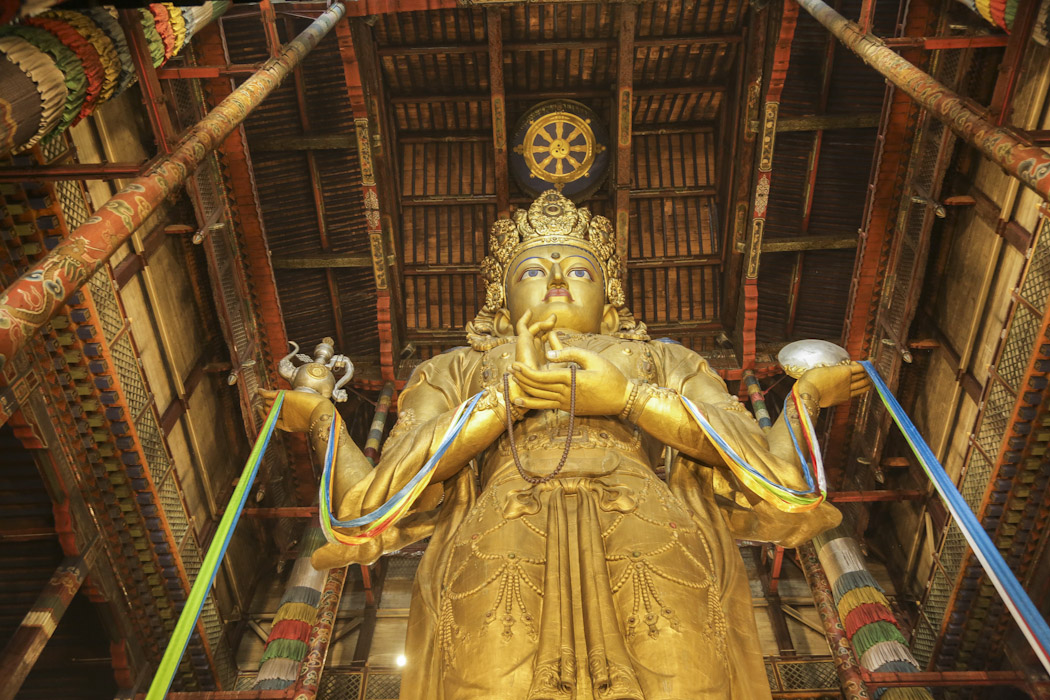 You will find several statues of different Buddhas in the different monasteries or parks in Mongolia. This impressive representation of Buddha is called the Migjid Janraisag and is located inside the Gandan monastery. It is the tallest indoor Buddha (of Mongolia?) with its 26.5 metres and it’s made of valuable metals and precious stones. 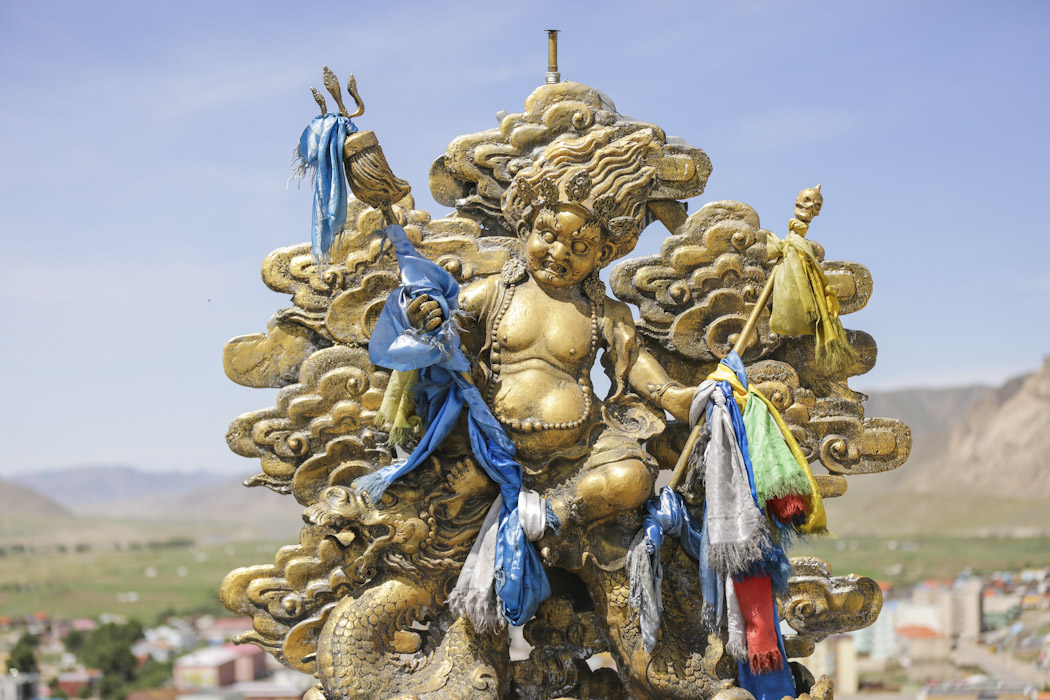 While the Buddhas were humans (though unlike any other human, both in their relation to the gods and in their physical and mental qualities), there is also a place for deities (devas) in Buddhism, though they live in separate realms and mind their own business, not having any special interest in our human lives. We get to see many representations of different deities in temples or even in the open.

Praying or not Praying? 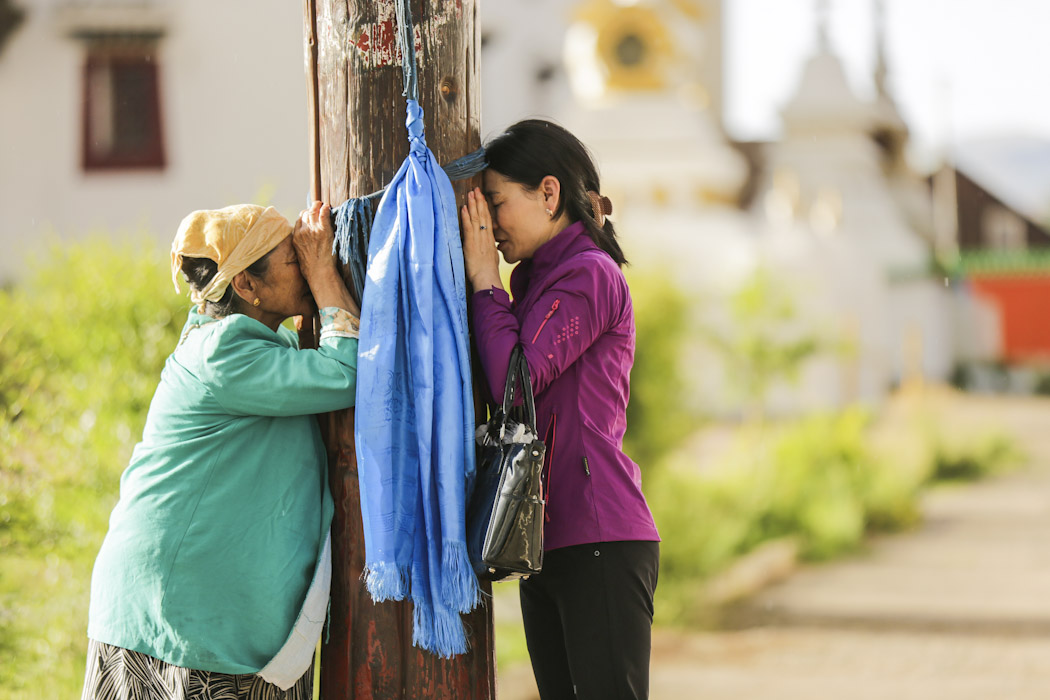 Since the definition of prayer is ‘a request for help directed to a God’, it is pertinent to ask if Buddhists pray. Buddha is not a God and the deities mind their own business, so what do Buddhists do? They chant kind of mantras to request help, to express gratitude or to make vows, they spin the prayer wheel, they hang khatas. But to whom? Perhaps to a transcendent Buddha? 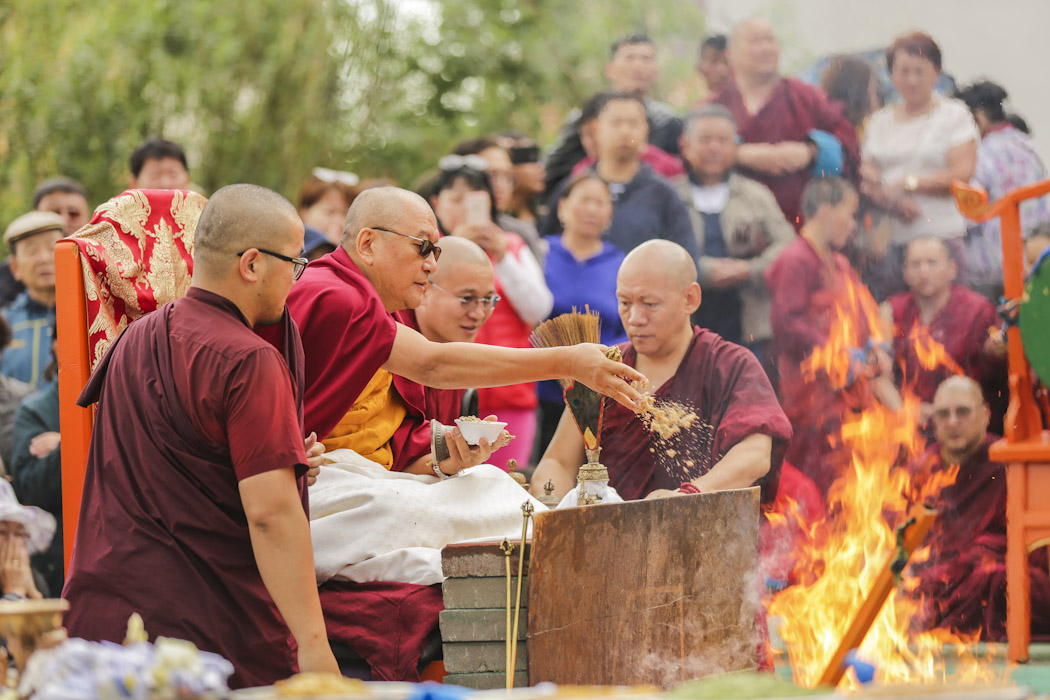 We had the chance to assist to a Fire Puja ceremony in Ulaan Baatar. The main principle of the Fire Puja ceremony is making offerings. An important Lama (in this case they had a Tibetan Lama) puts the offerings that worshippers bring (in this case there were many food ingredients, such as rice and cereals) in the fire. As the offerings get consumed by the fire, they are being offered.

Brief History of Buddhism in Mongolia