This is probably the prettiest of all the short hikes of the Mullerthal. It comprises some of the most enchanting, mossy woods of Luxembourg, as well as the most bizarre sandstone rock formations of the region. Another attraction of this walk is the small Schéissendëmpel Cascade, beautifully located under a quaint bridge. It doesn’t really matter in which season you hike this trail, since it remains a beautiful trek in all four seasons… 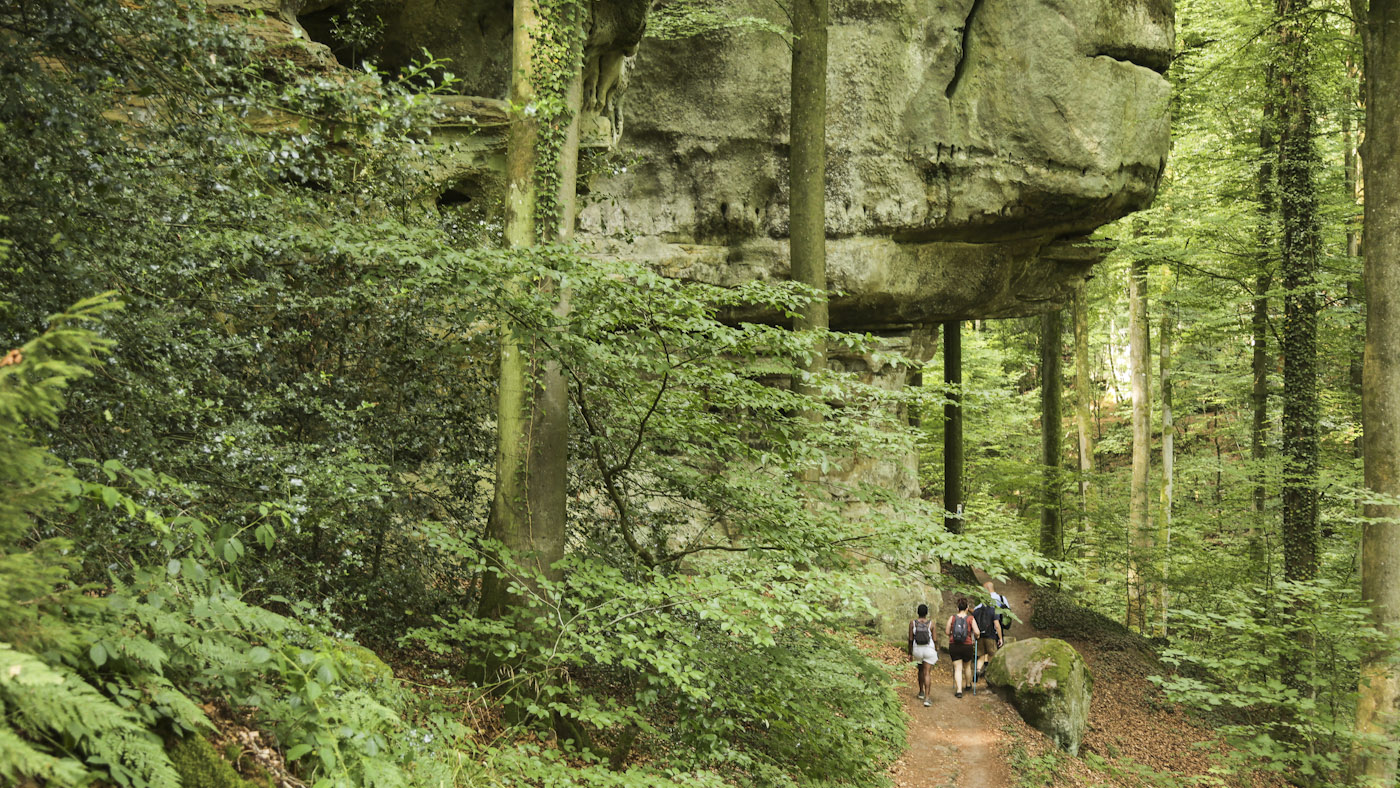 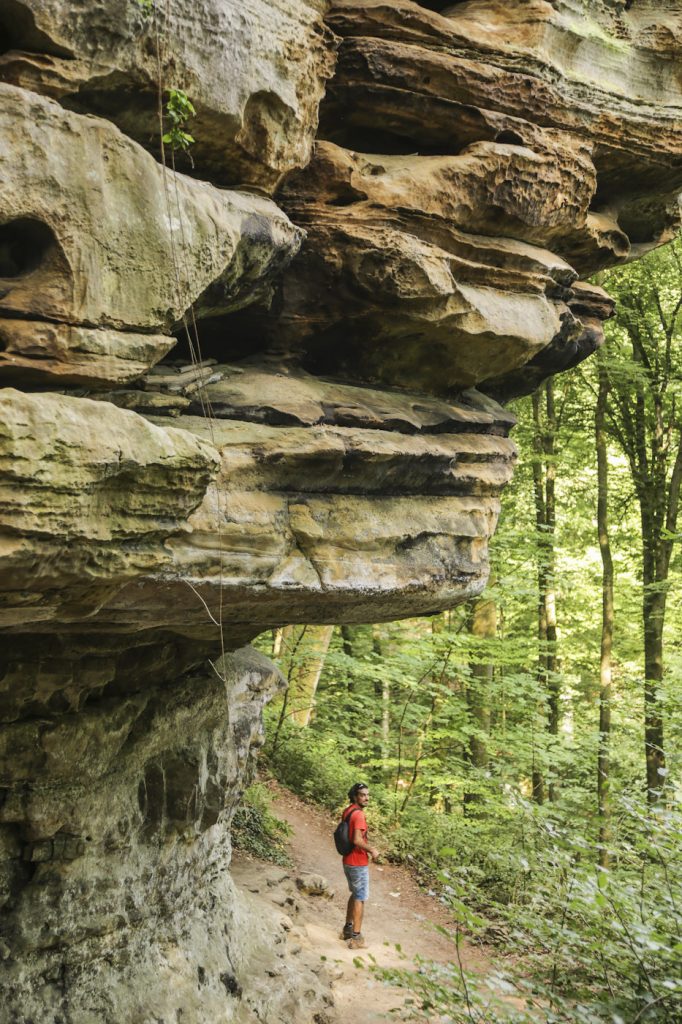 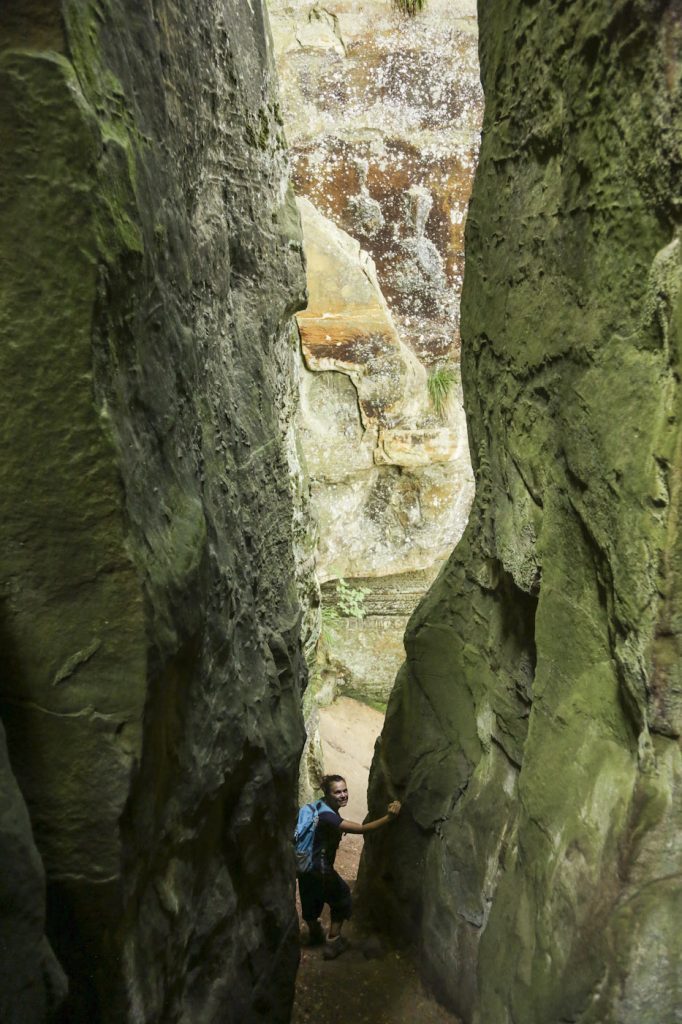 The most popular location to start this walk is in Consdorf, where there is a parking place next to the Konsdrëffer Millen (Condorf’s Mill). The elevation profile of the trek ranges from 200 metres to 330 metres, up and down.

Most of the walk follows through the heart of Luxembourg’s Little Switzerland, the Mullerthal, with its verdant, mossy woods and the amazing sandstone rock formations. Depending on one’s fitness and rhythm, the hike can last as little as two hours or, if one takes the time to enjoy the views and the bio diversity of the region, up to four hours. 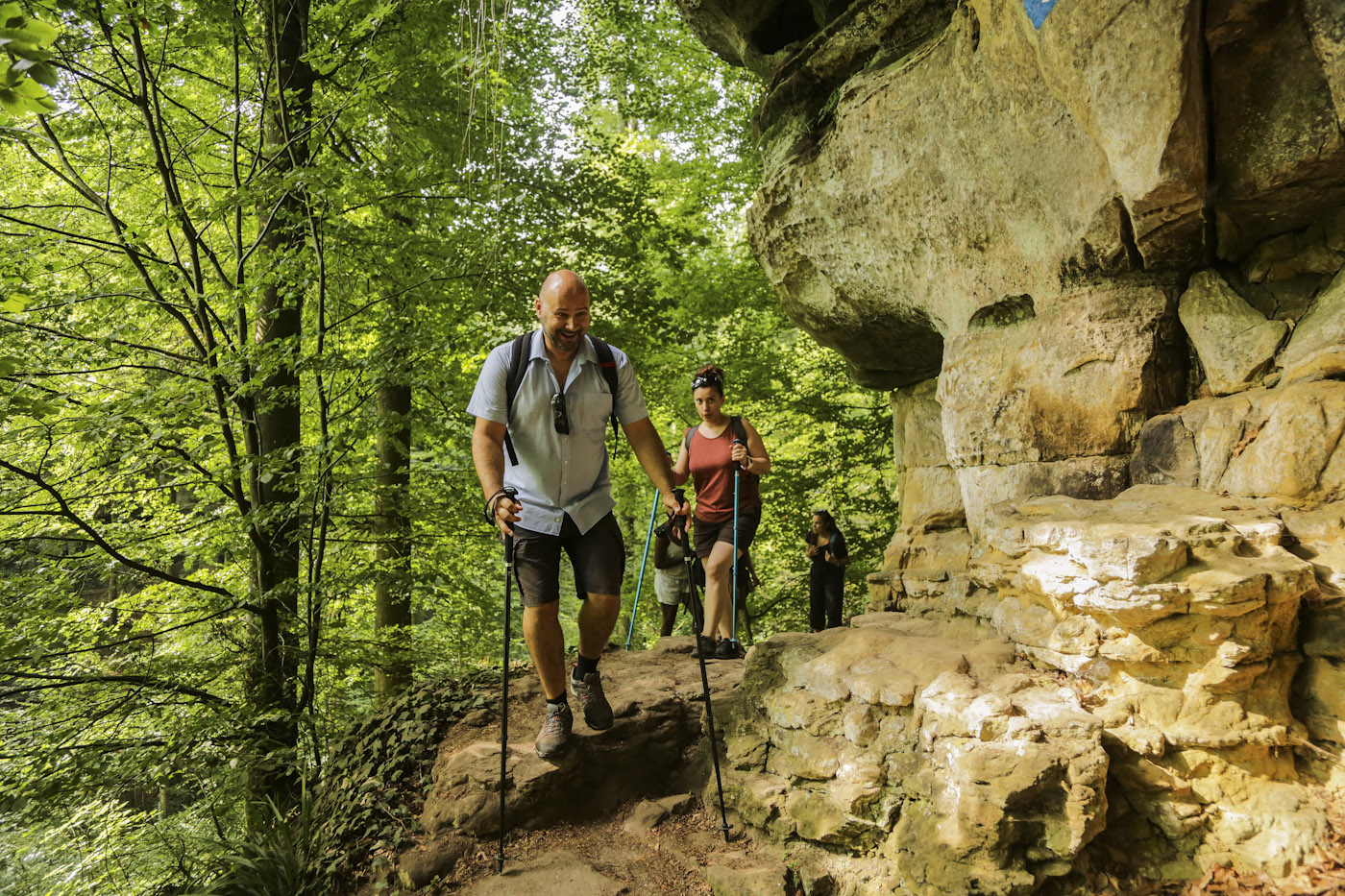 After a few kilometres, the forest leads to an impressive sandstone wall, that suddenly starts transforming into different shapes. Be attentive not to miss the entrance to the most spectacular rock formation, known as the Kuelscheier (which literally translates as ‘Coal Barn’). The name Kuelscheier probably started being used in the 50’s or earlier, when, at that time, the coal mine industries in the region used this place to store their charcoal. The cracks served as a barn and therefore the name ‘Coal Barn’. 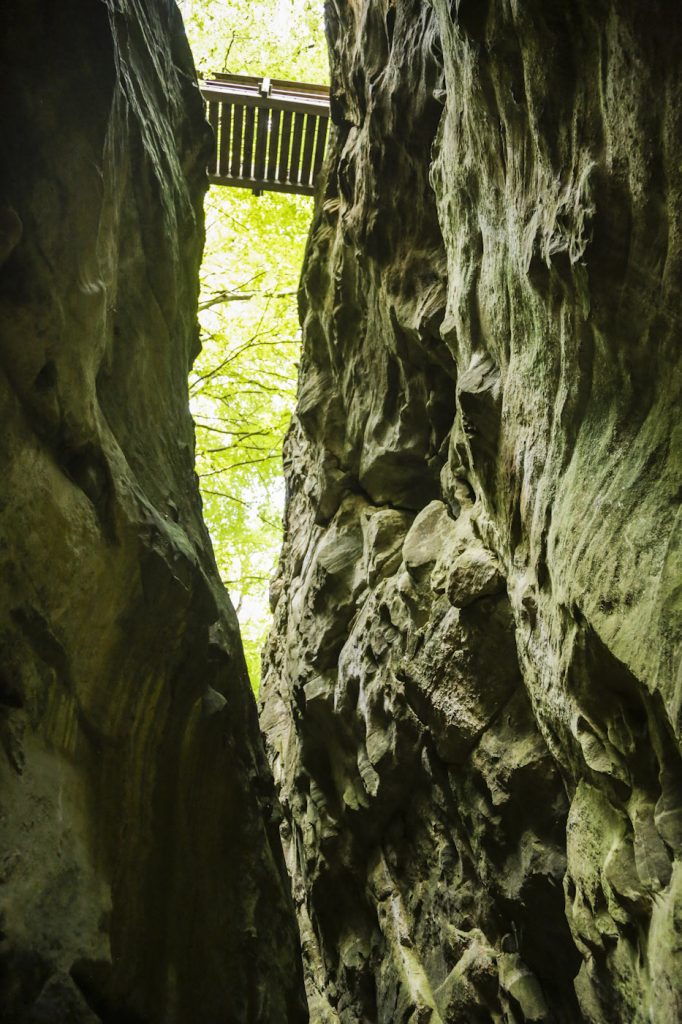 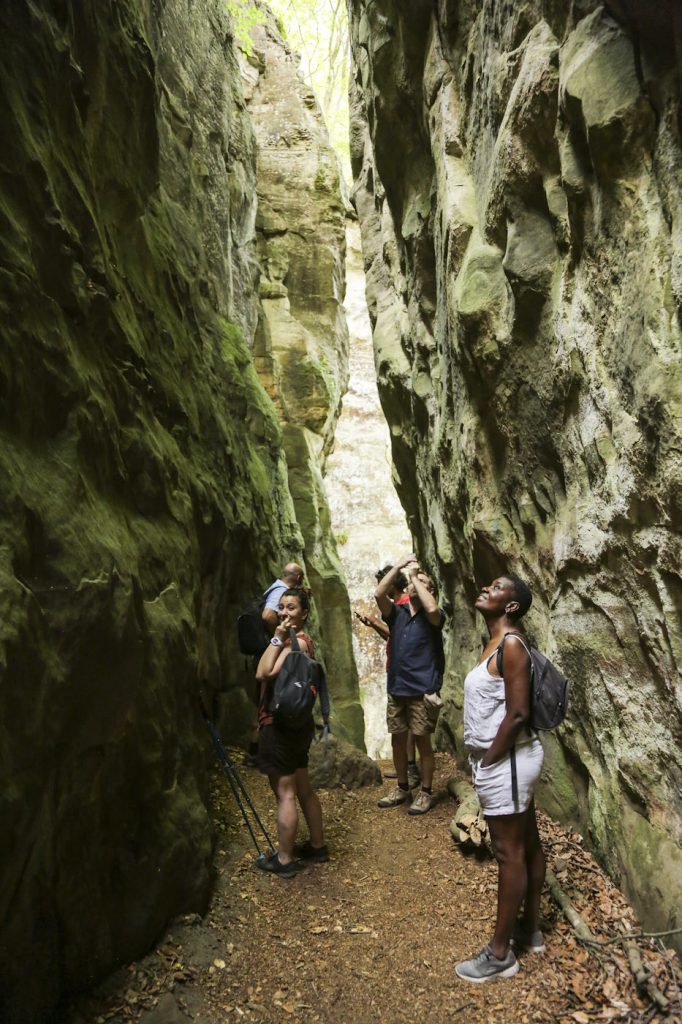 The Kuelscheier is a narrow passage between the sandstone rocks, which is about 100 metres long. The tunnel was naturally formed, when the sandstone block split in two. This happened because of erosion (rain and wind) that first made cracks along the wall and eventually the huge rock got split and is now separated. 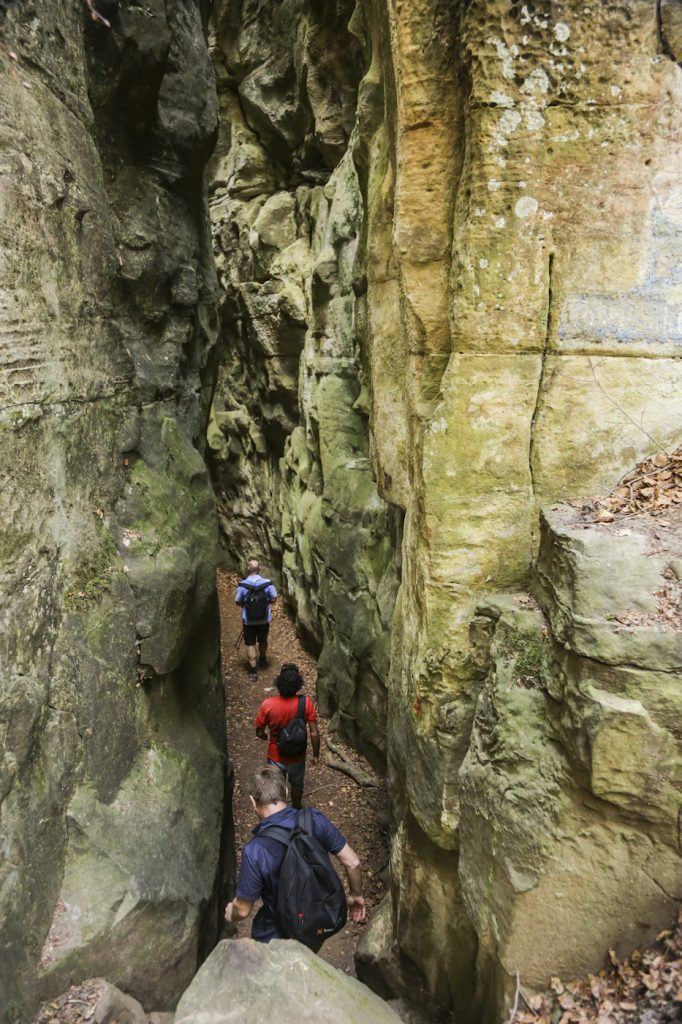 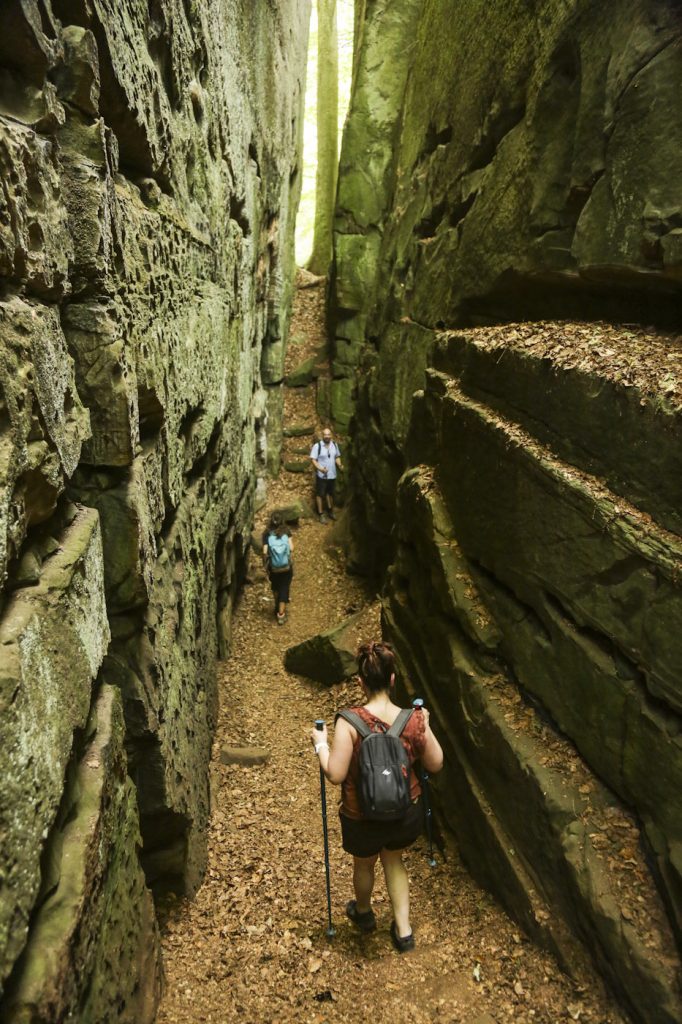 Once in the heart of the Kuelscheier, a few steps next to the rocks lead to viewpoints above, for aerial views of the forest. Don’t miss the opportunity to climb them, but in winter, be very careful because the rock is extremely slippery. Once outside the Kuelscheier do not forget to look backwards for more insane views of the rocks. From this moment on, you will start leaving the rock formations behind you. 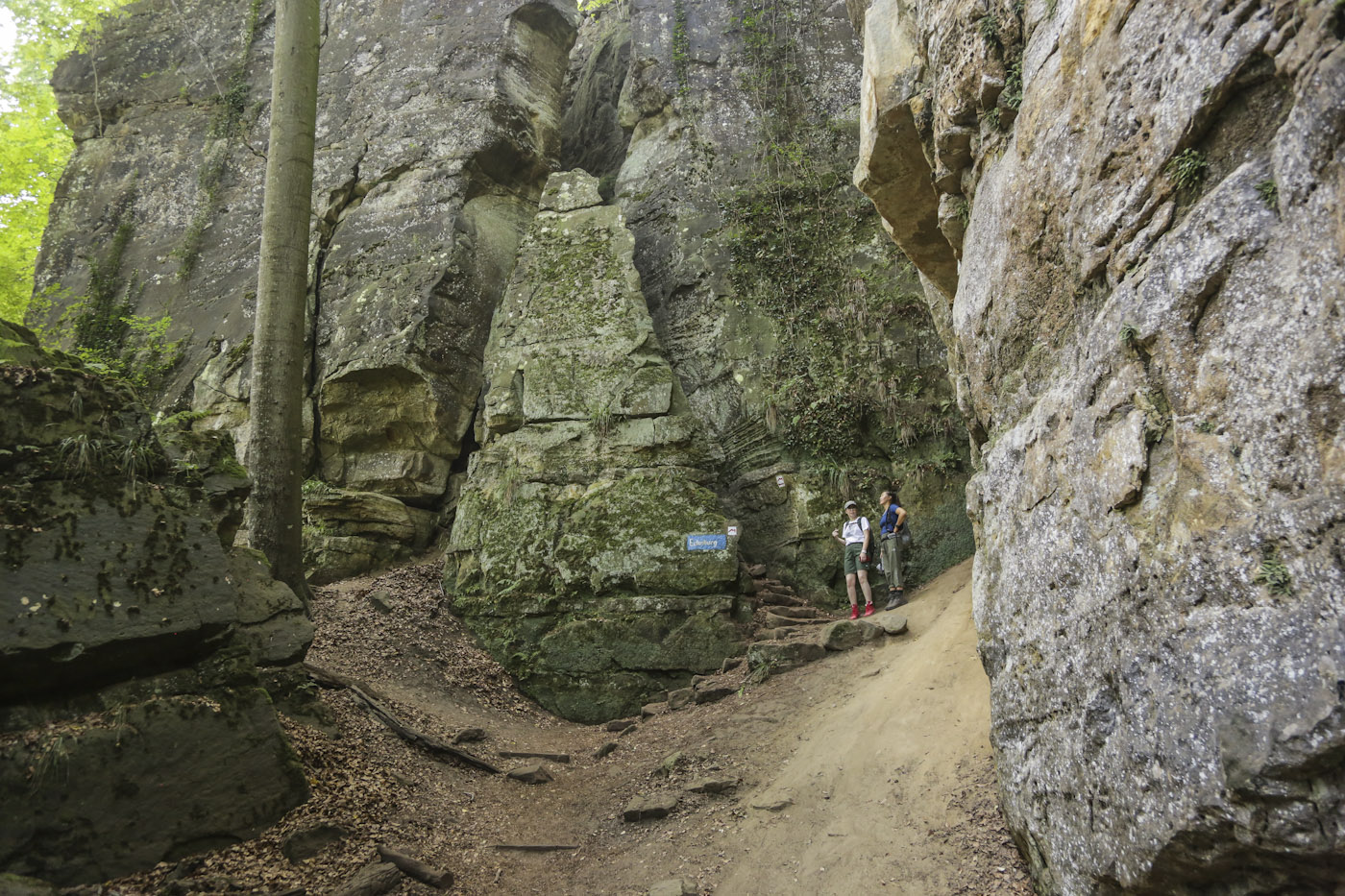 Eventually the walk starts leading to the main road. This is not yet the end of the track though. You will need to cross the road in order to continue the track. You are now approaching the most popular part of the track, and therefore, you will find a lot of people here, especially if it is summer time. Many come here just to visit the cascade, so after passing the cascade you are sure to be quiet again. 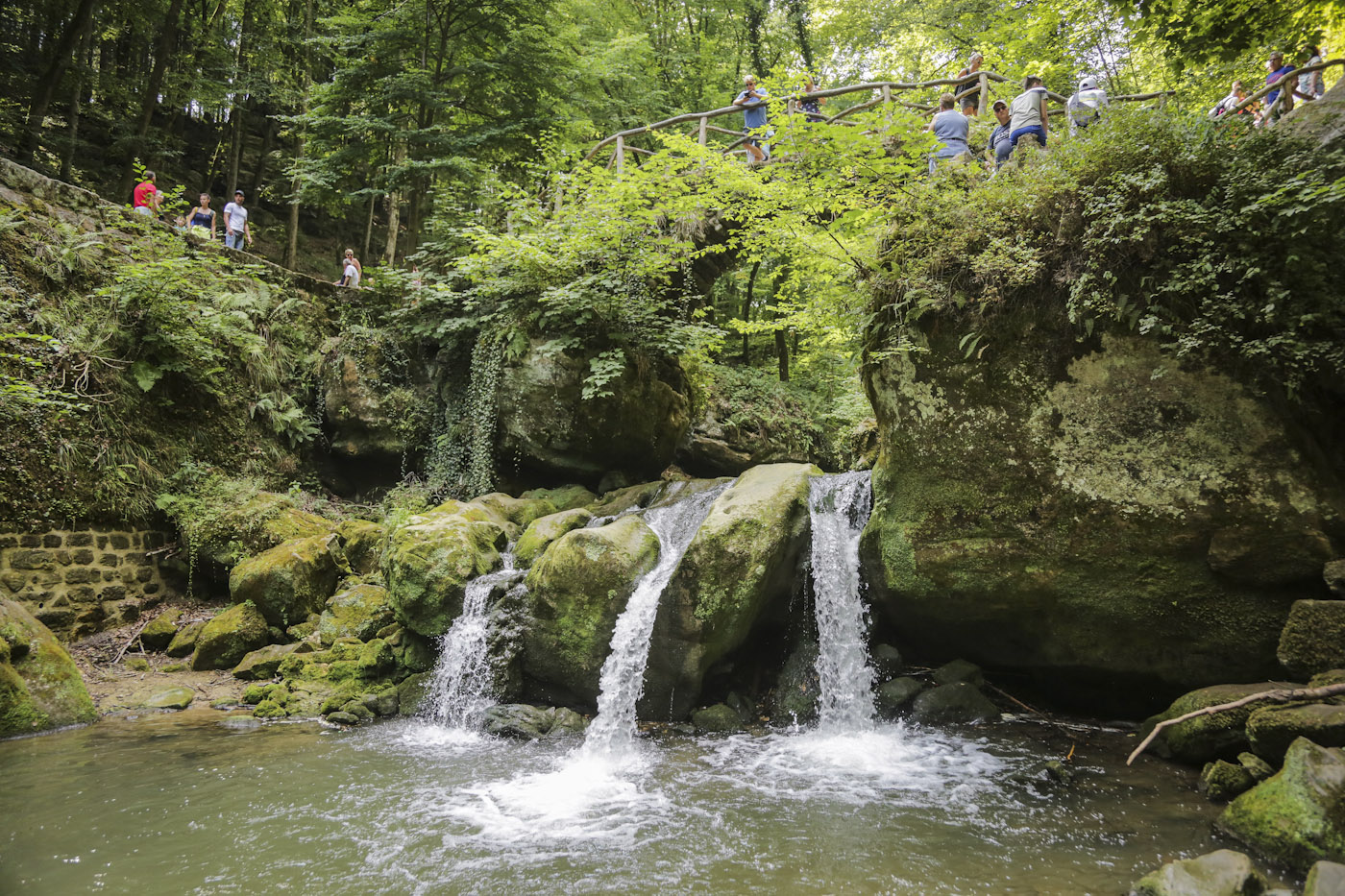 But do make the detour to go down to the cascade, from where you get the best views of the falls and of the sandstone bridge over the Black Ernz River, built in 1879, and nowadays the landmark of the Mullerthal region. 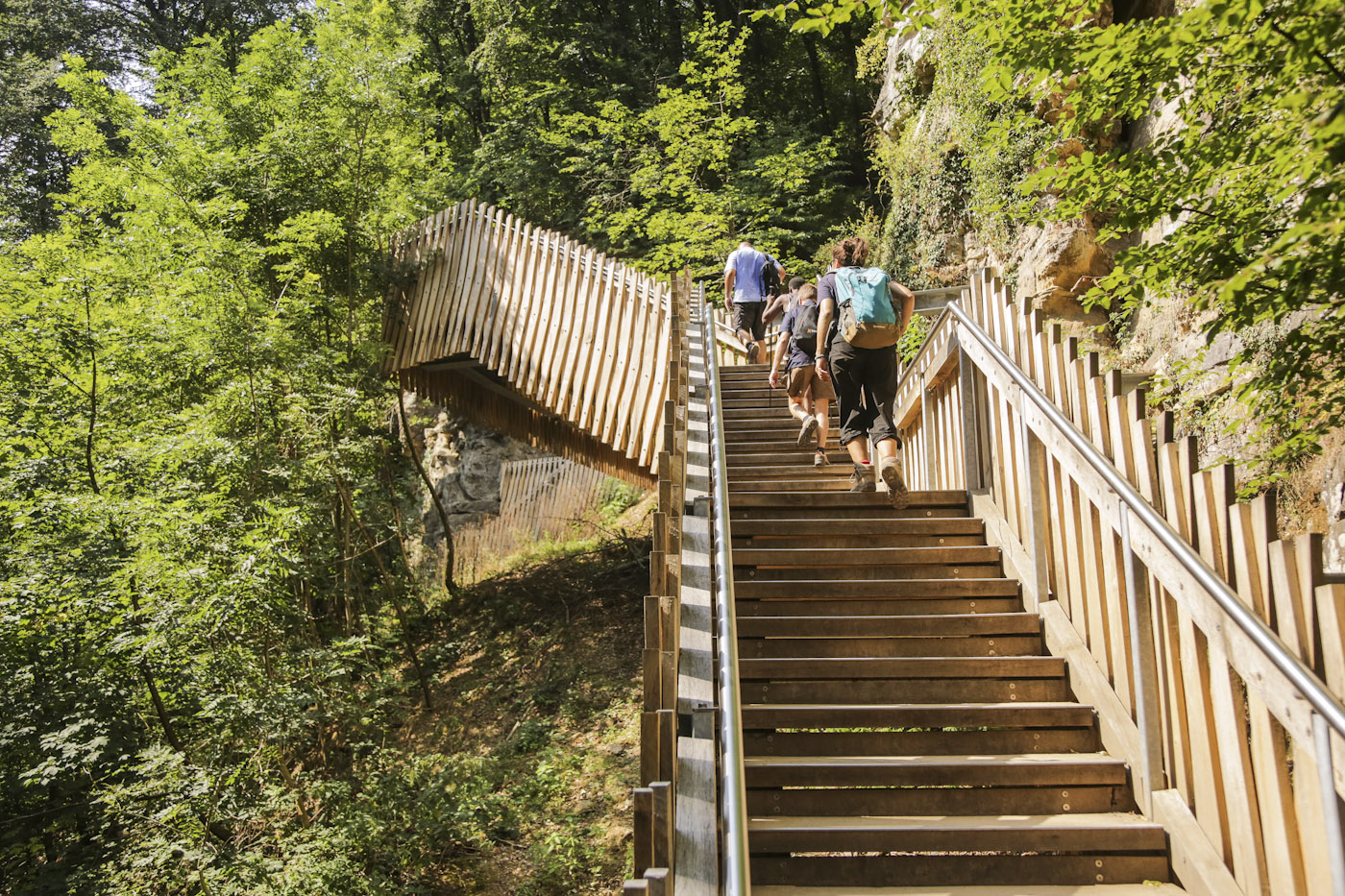 It is possible to make a few shortcuts in order to shorten the walk, but there is no reason to do so, as the difficulty of the walk is mostly from easy to moderate. There are also several resting areas with benches for picnics. There’s a particularly beautiful one after the new wooden staircases, if you follow the direction towards the Mullerthal village.

Eventuallly we made it back to the parking lot at Consdorf’s Mill. It took us a couple of hours to complete the hike, because we decided to have a lunch break in one of the restaurants in the Mullerthal. In the end, we were tired but excited that we had returned to the Mullerthal, and this time with a group of friends.

Photos selected with the help of our nephew Nils 🙂