Central Asia, the mysterious -stan countries… the magnific countries behind the silk road…  If you would like to test your knowledge and also learn more about this region, you should try this quiz about Central Asia. Good luck!

Which are the five Central Asia -stans? 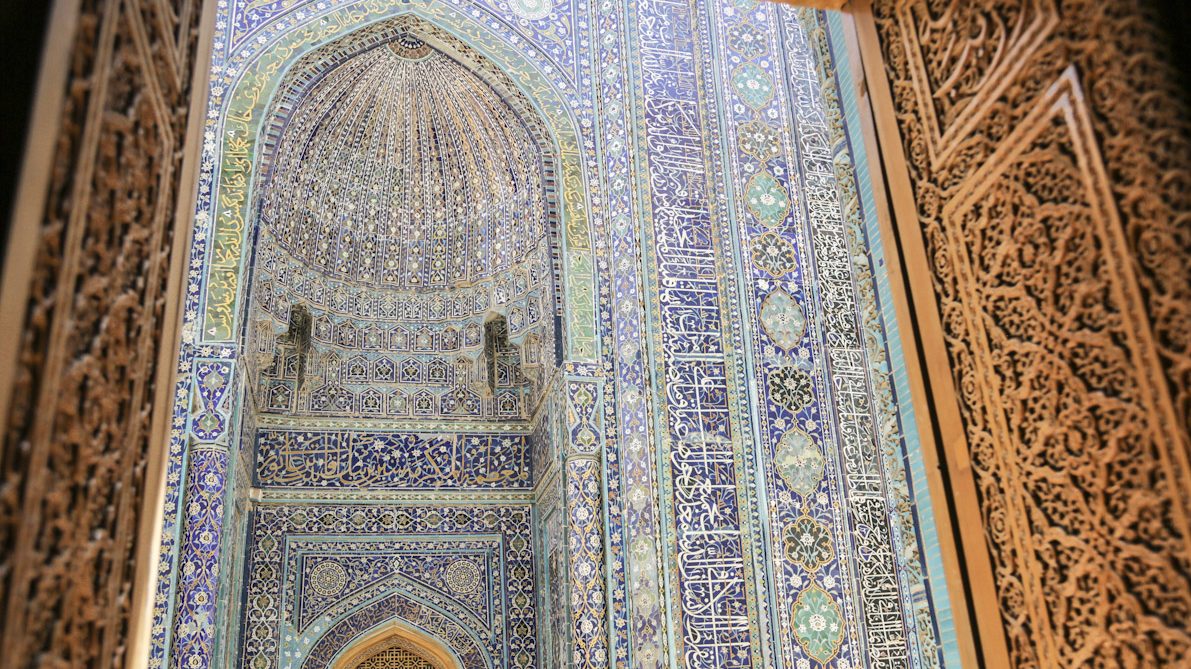 Plov is the national dish of both Tajikistan and Uzbekistan. What does it consist of? 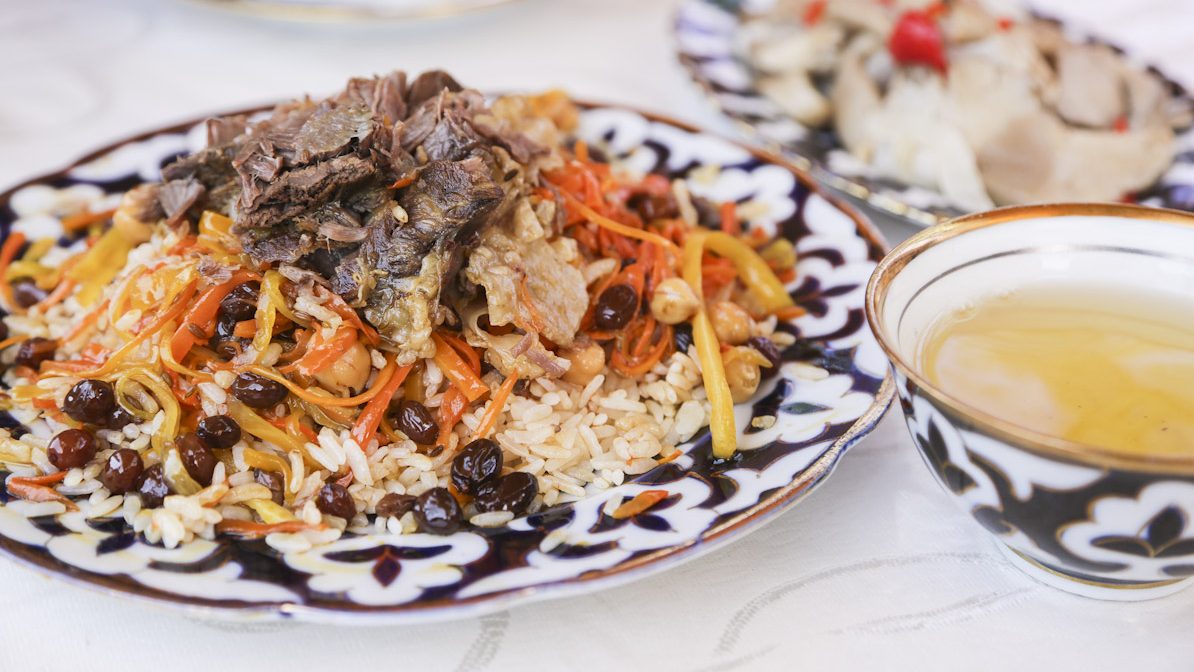 It looks tasty and it is even tastier than what it looks like! This is plov, an Uzbek and Tajik typical rice dish prepared with meat and a lot of grated carrots and onions. It is often cooked on a large open pan (a kazan) on an open fire. The best ones have a variety of dried fruits added at the end of the cooking, such as raisins or barberries.

Whose country is this -stan's flag? 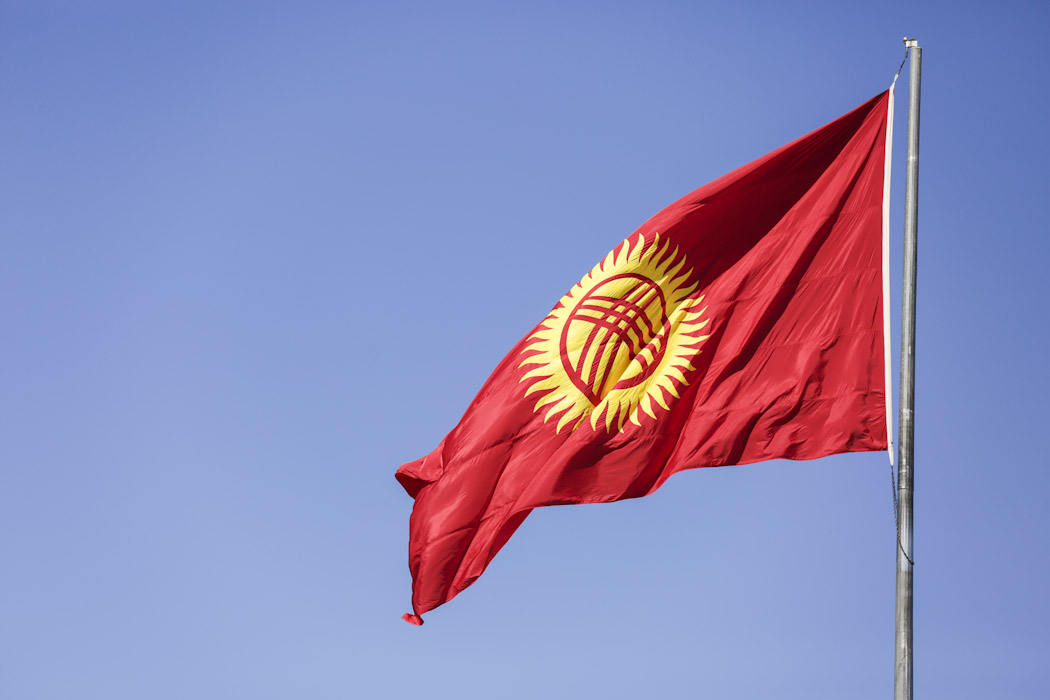 The Kyrgyz's flag features a 40-ray sun, as a reference to the 40 clans of the great Manas. Also the word 'Kyrgyz' is thought to be derived from the Turkic word for 'forty'.

Which of the following cities is the capital of Kyrgyzstan? 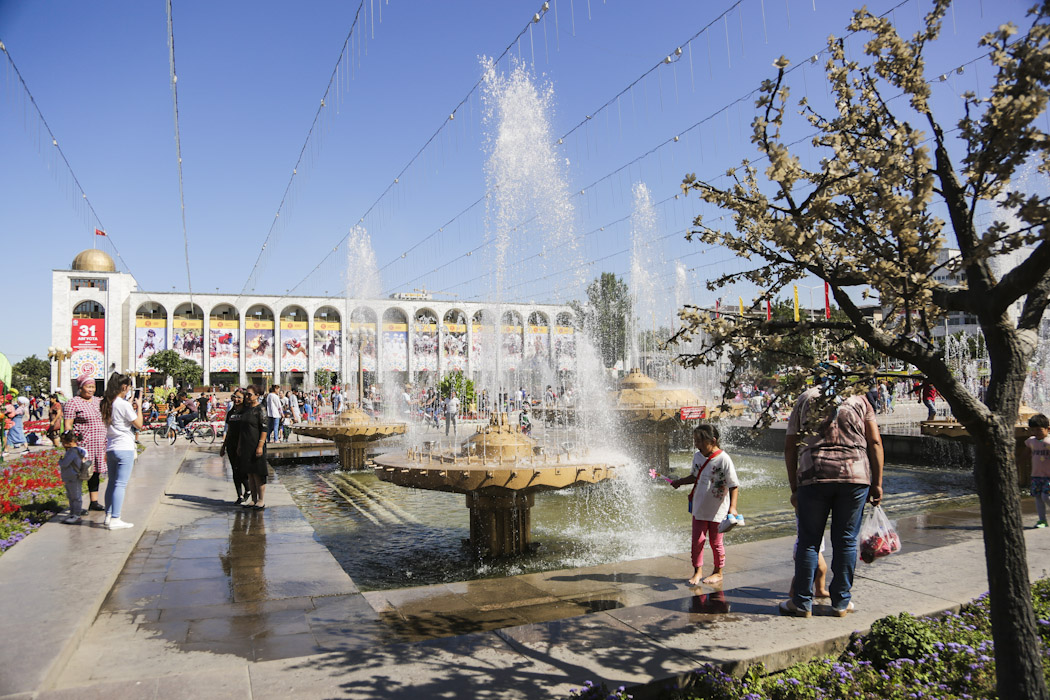 Tashkent is the capital of Uzbekistan. Osh is the second largest city in the country, after Bishkek, its capital. Bishkek’s main square, the Ala-Too Square, has got sixteen huge fountains, countless blossoming flowerbeds and a lot of people. On the other side of the square, separated by a four-lane road, and behind the huge statue of the great Manas, the imposing State History Museum. Manas, the national hero, and his horse found their way to this dominant place in 1991 – with Kyrgyz Independence.

In which -stan do you find the Lake Issyk-Kul? 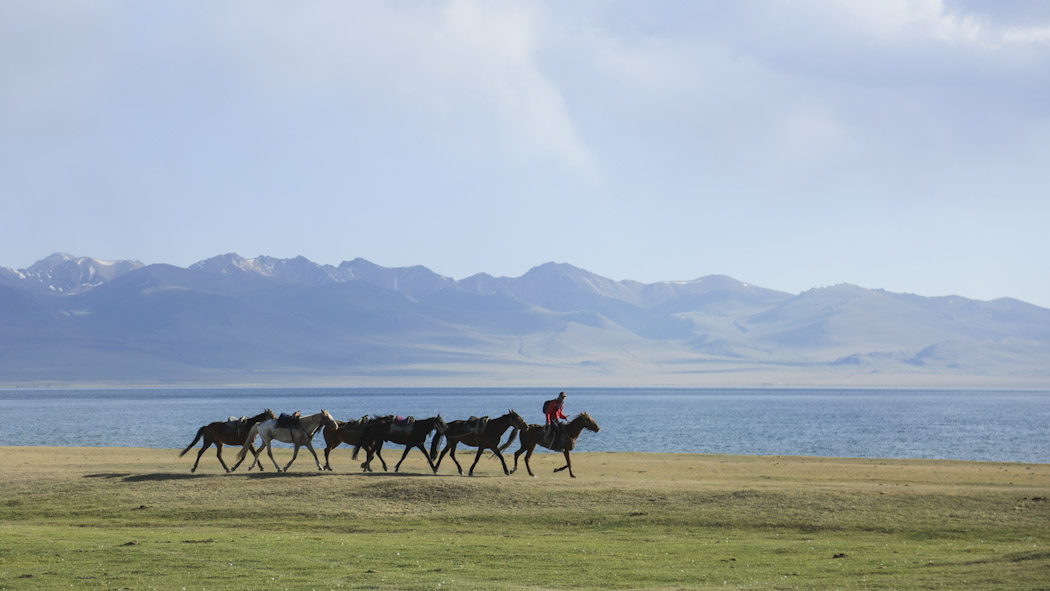 The Issyk-Kul is the world’s second largest alpine lake (after Titicaca in Peru). It lies at an altitude of 1,607 metres and reaches a depth of 668 metres. It is also the second largest saline lake in the world (after the Caspian Sea), with a length of 181 kilometres and a width of 60 kilometres. Its name means ‘warm lake’ because the lake never freezes despite being surrounded by snow-covered mountains. The lake was, and still is, a popular holiday resort for the ex-Soviet countries.

Which of the Central Asia -stans is the biggest by square km? 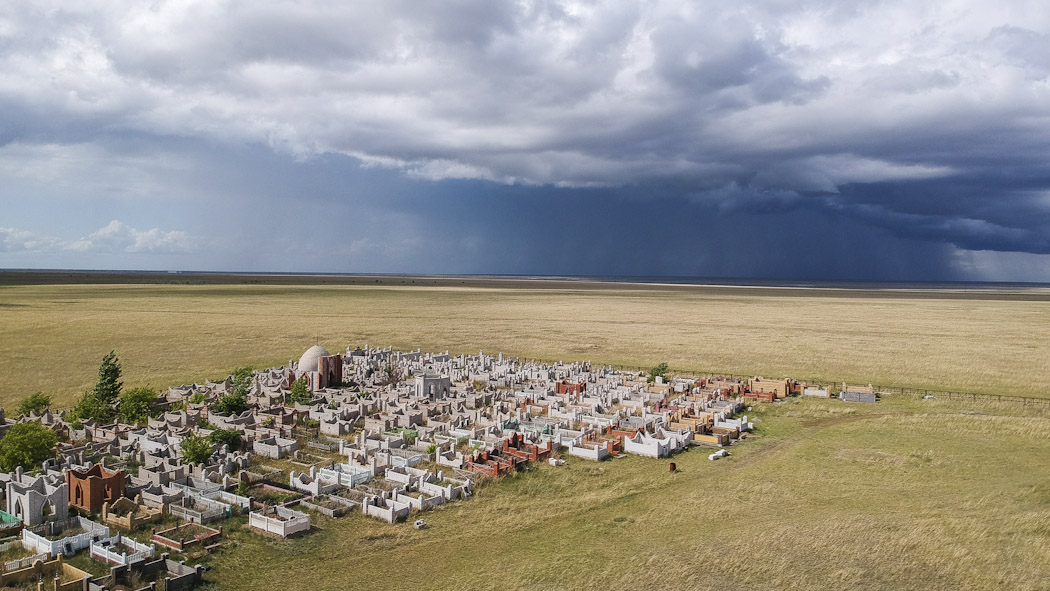 Which of the Central Asia -stans is the smallest by square km? 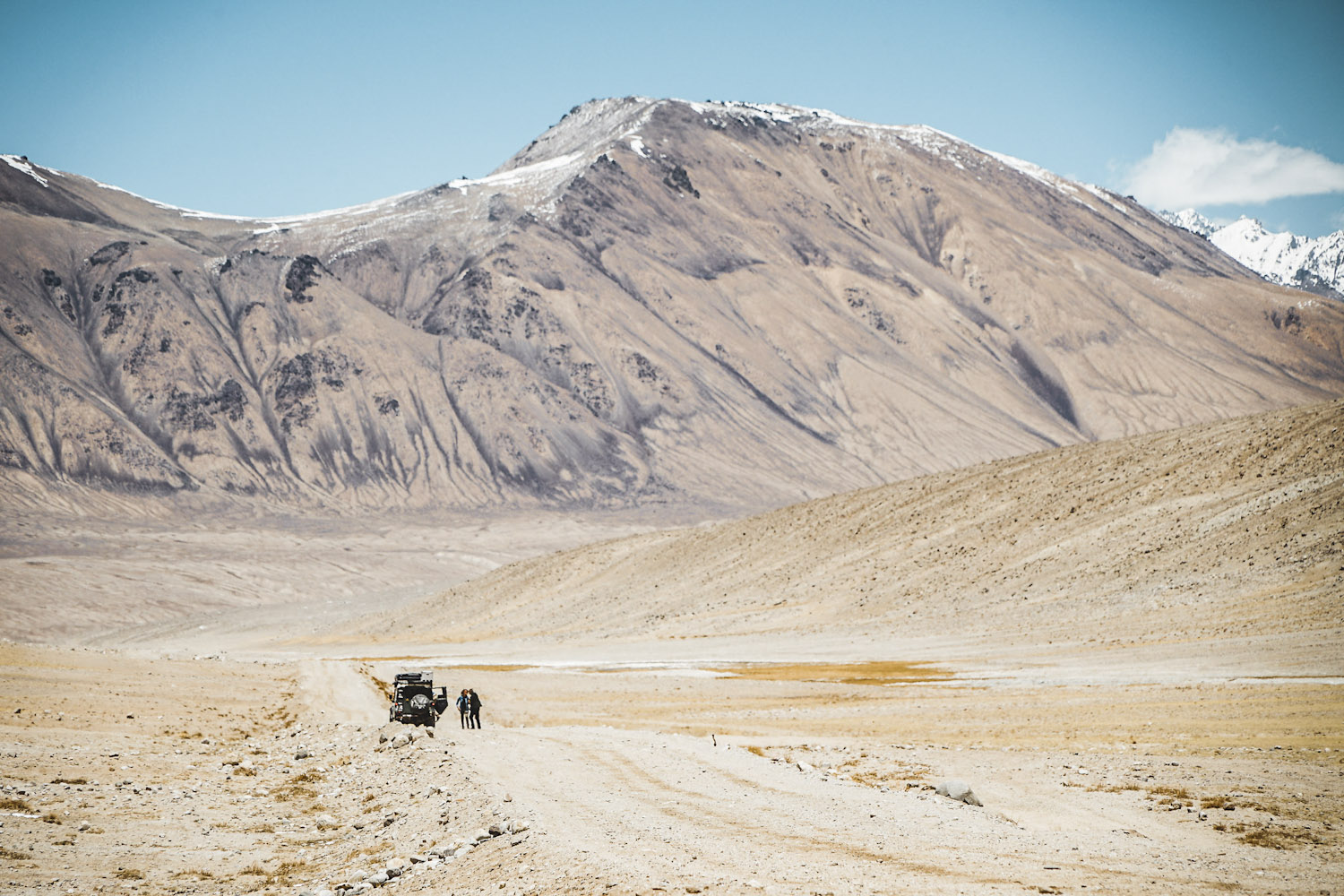 Which two Central Asia -stans have a coast at the Caspian Sea.

The Caspian Sea is bounded by Kazakhstan from mid-north to mid-east, Russia from mid-north to mid-west, Azerbaijan to the southwest, Iran to the south and adjacent corners, and Turkmenistan along southern parts of its eastern coast. The Caspian Sea is the world's largest inland body of water, classed as the world's largest lake or a full-fledged sea.

The Aral Sea is located in two -stan countries. Which ones? 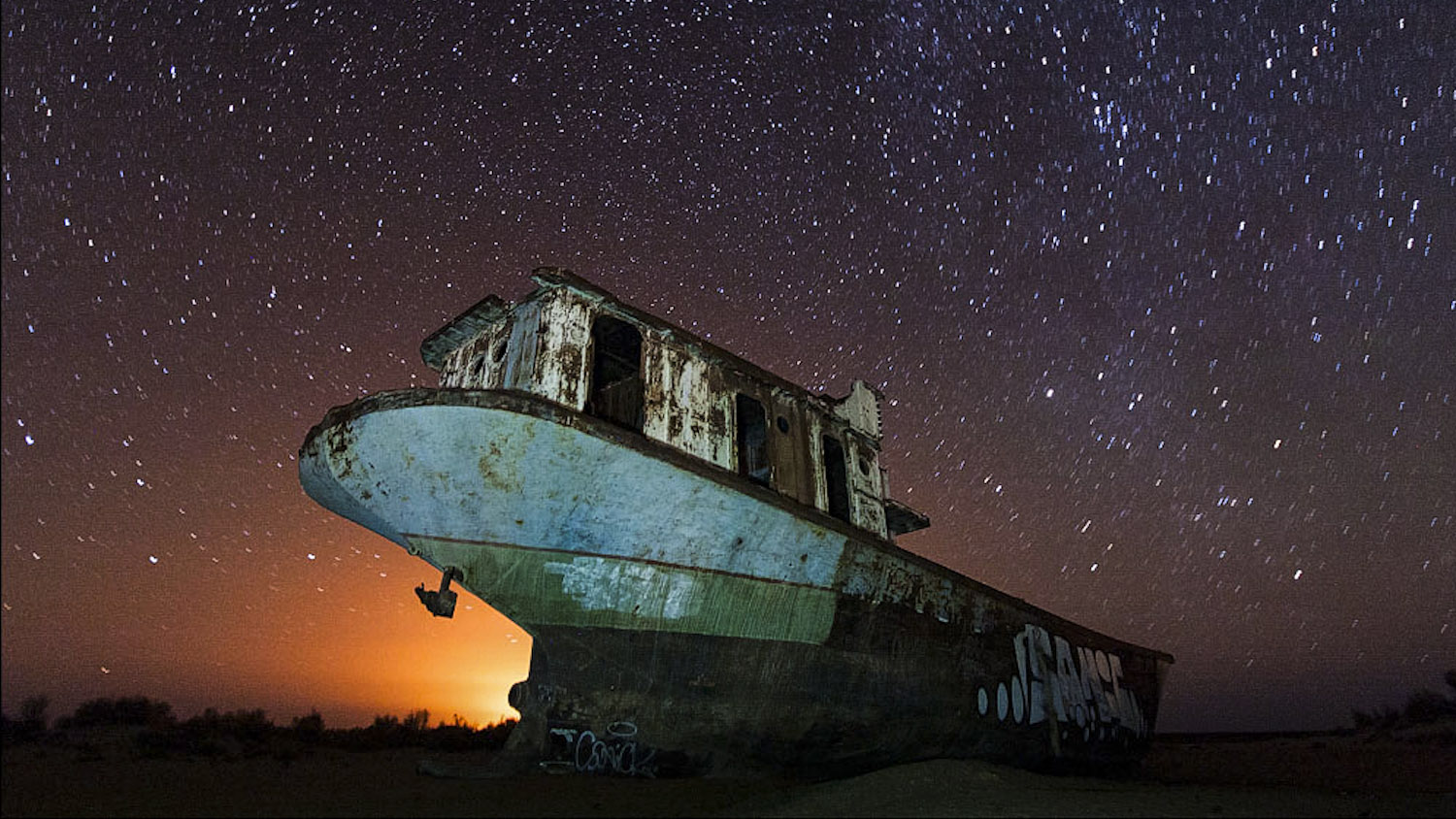 The Aral Sea is an endorheic lake spread between Kazakhstan and Uzbekistan, which began shrinking in the 1960s and has largely dried up by the 2010s.

Whose country is this -stan's flag? 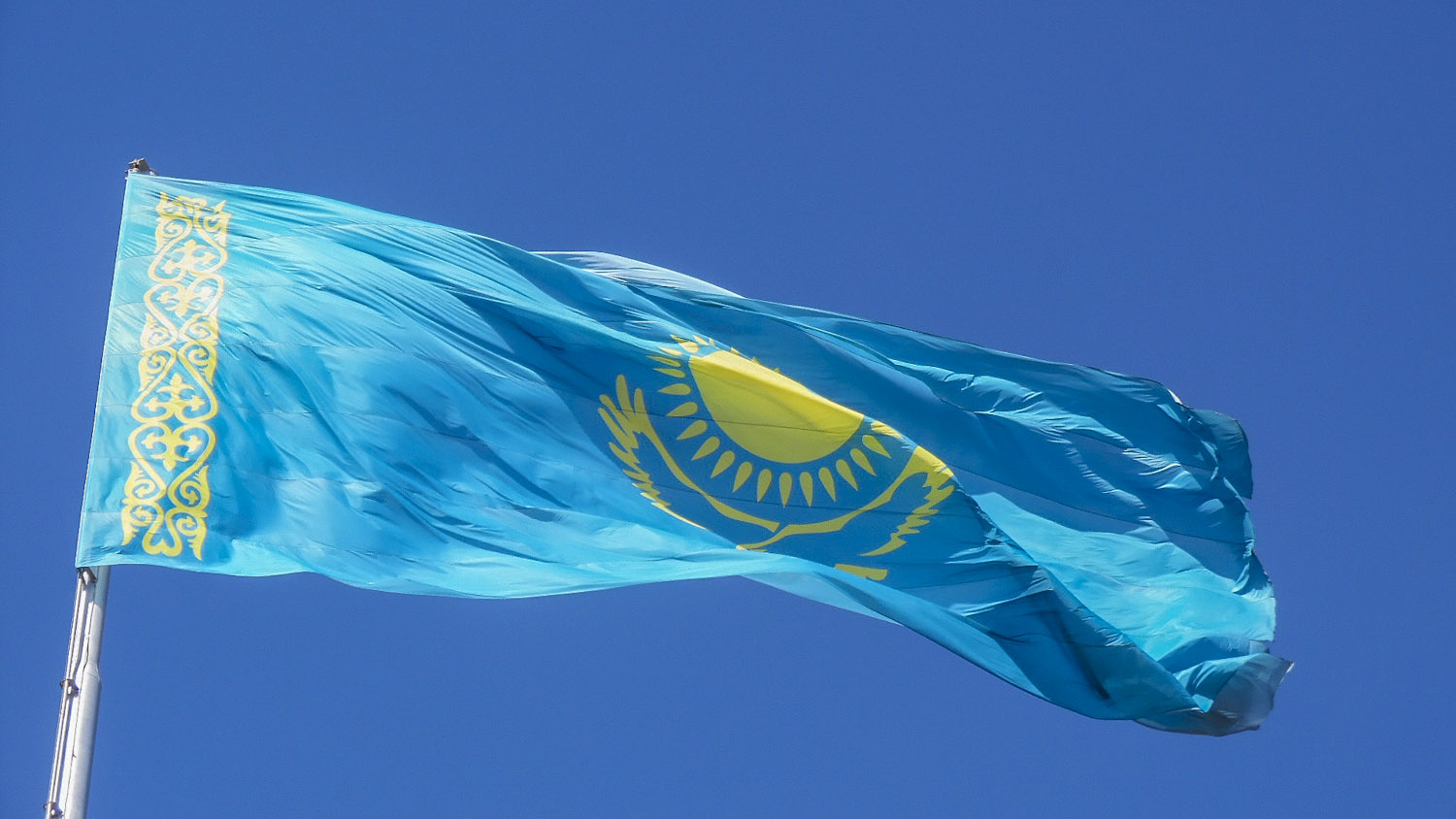 The national flag of Kazakhstan has a gold sun with 32 rays above a golden steppe eagle, both on a sky blue background. The hoist side displays a national ornamental pattern called "koshkar-muiz" (the horns of the ram) in gold. The blue colour is of religious significance to the Turkic peoples of the country, symbolizing cultural and ethnic unity; it also represents the endless sky as well as water. The sun, a source of life and energy, exemplifies wealth and plenitude; the sun's rays are shaped like grains, which are the basis of abundance and prosperity; the eagle has appeared on the flags of Kazakh tribes for centuries and represents freedom, power, and the flight to the future.

Which of the following cities is the capital of Kazakhstan? 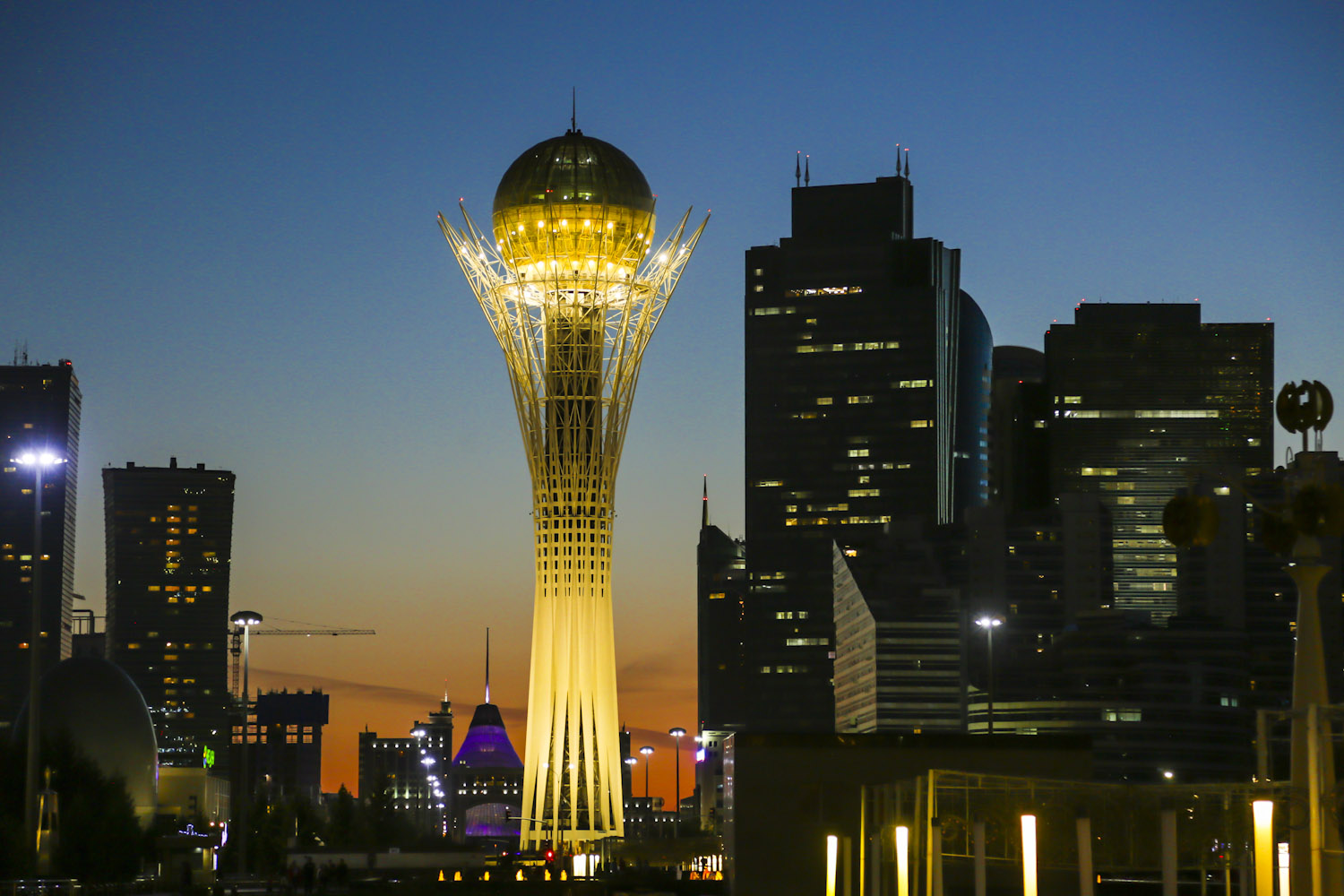 Astana replaced Almaty as the capital of the nation in 1997. Almaty remains the largest city though Astana is the most economically developed. In 2019, when President Nursultan Nazarbayev left the power, the city of Astana was renamed after him, hence the new name Nur-Sultan.

In which Uzbek city is the spectacular Registan located? 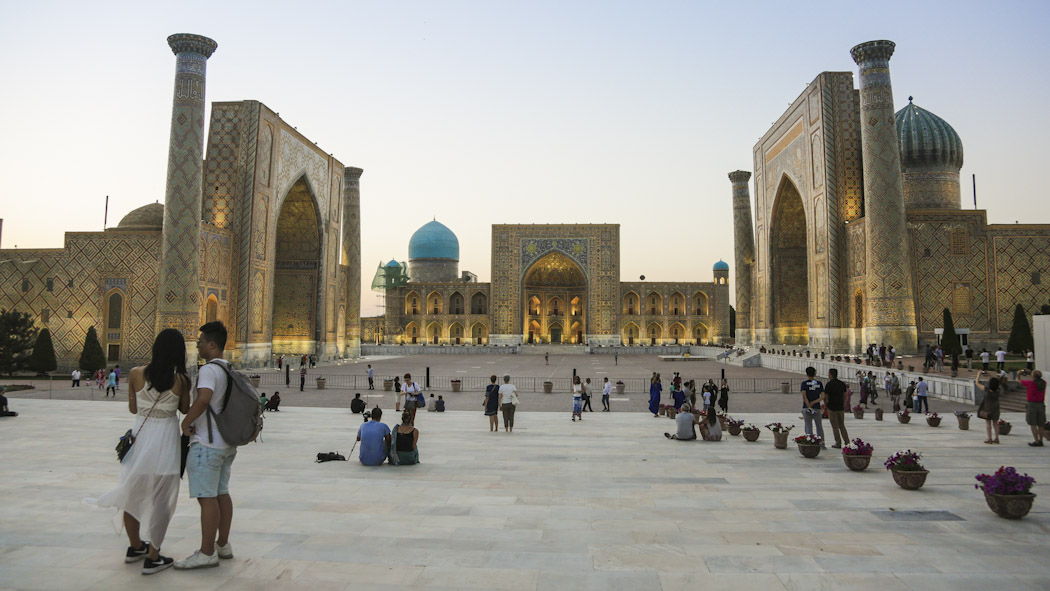 In Persian Registan means ‘desert’ or ‘sandy site’. Given the location of the city, surrounded by desert steppes, it is easy to understand the name of the main square of the city, where in former times the population gathered to relax, to sell their merchandise, to hear their governors or to assist to executions.

Many national sports in Kyrgyzstan are played on horses. Which one is represented on the photo? 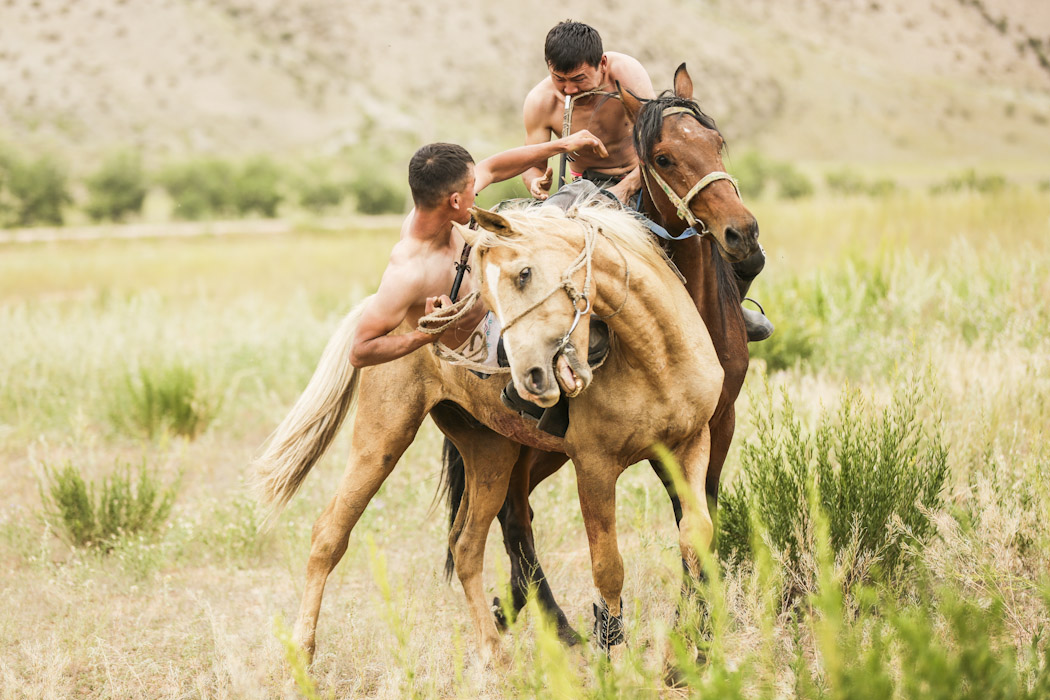 Horse wrestling is called Er Enish and it is a sport in which two competitors fight on horseback with the aim to bring the opponent to the ground. Kyz Kuumai is a funny sport in which a man riding a horse tries to steal a kiss from a woman who is also riding a horse. The Kok-Boru is considered the main national sport. During three periods of 20 minutes each, four mounted riders from two teams, try to grab the carcass of a goat from the ground to score a ‘goal’ by placing it in their opponent’s goal (the Tay Kazan). Since the whole action takes place on horseback, Kok-Boru is often compared with polo.

The Turkmen crater Darvaza is known as the ‘Gate of Hell’. Why? 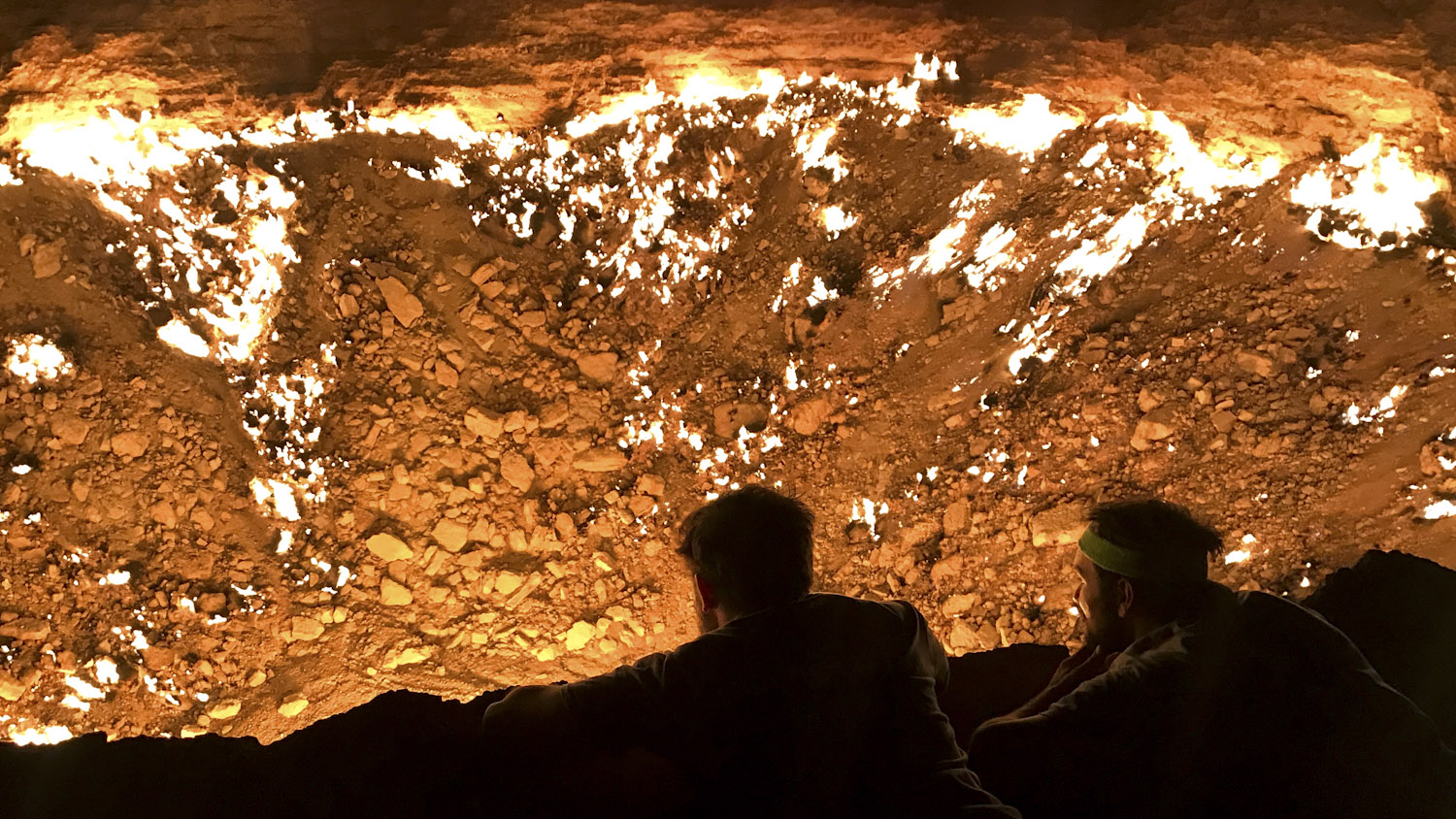 The Darvaza crater is a natural gas field that collapsed into a cavern located in Derweze. Soviet geologists may have intentionally set it on fire to prevent the spread of methane gas, and it is thought to have been burning continuously since 1971. The gas crater has a total area of 5,350 square metres.

In which -stan are the Pamir Mountains located? 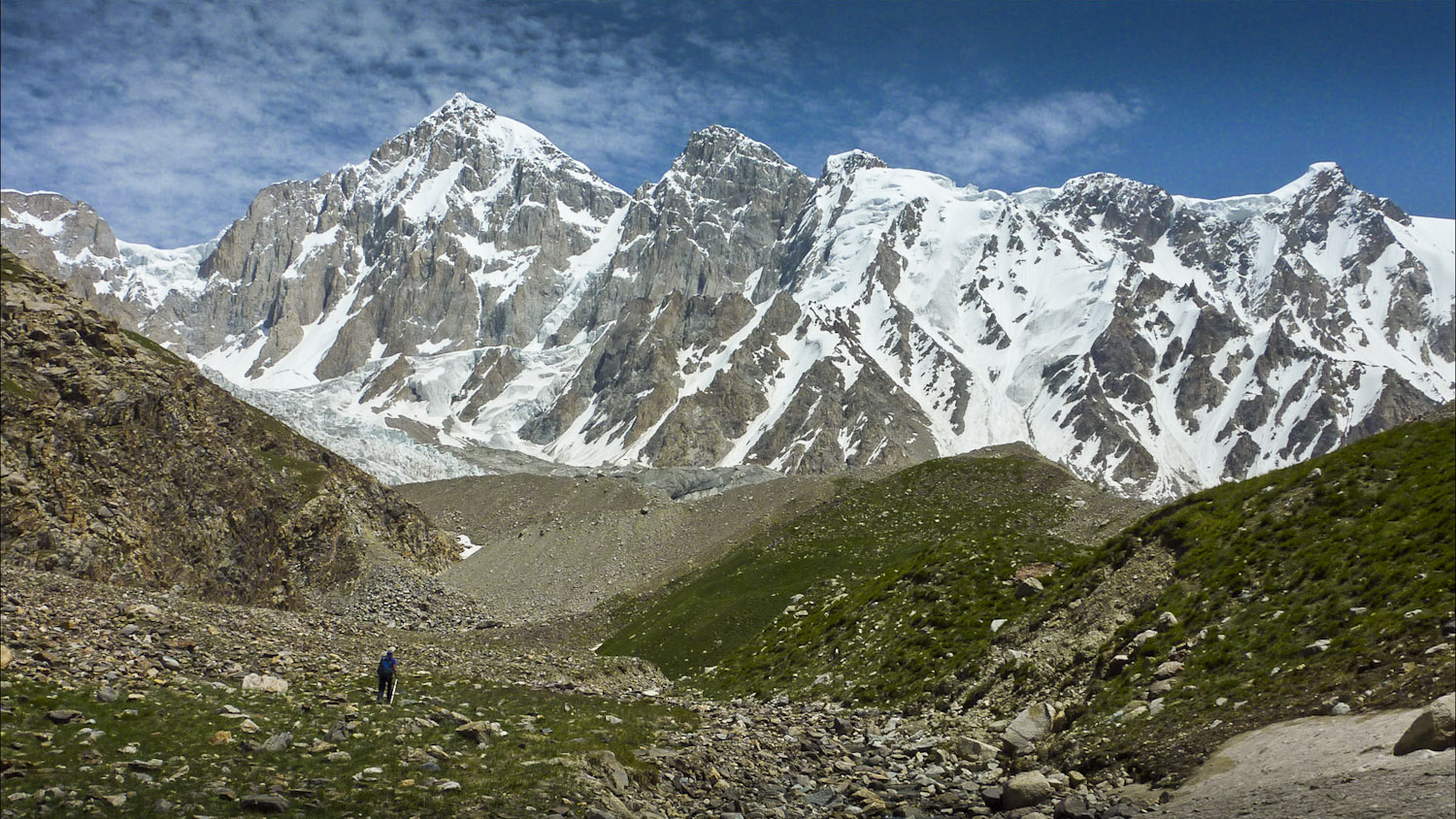 The Pamir Mountains are a mountain range between Central Asia, South Asia, and East Asia, at the junction of the Himalayas with the Tian Shan, Karakoram, Kunlun, Hindu Kush, and Hindu Raj ranges. They are among the world's highest mountains.

In which country is the amazing Charyn canyon located? 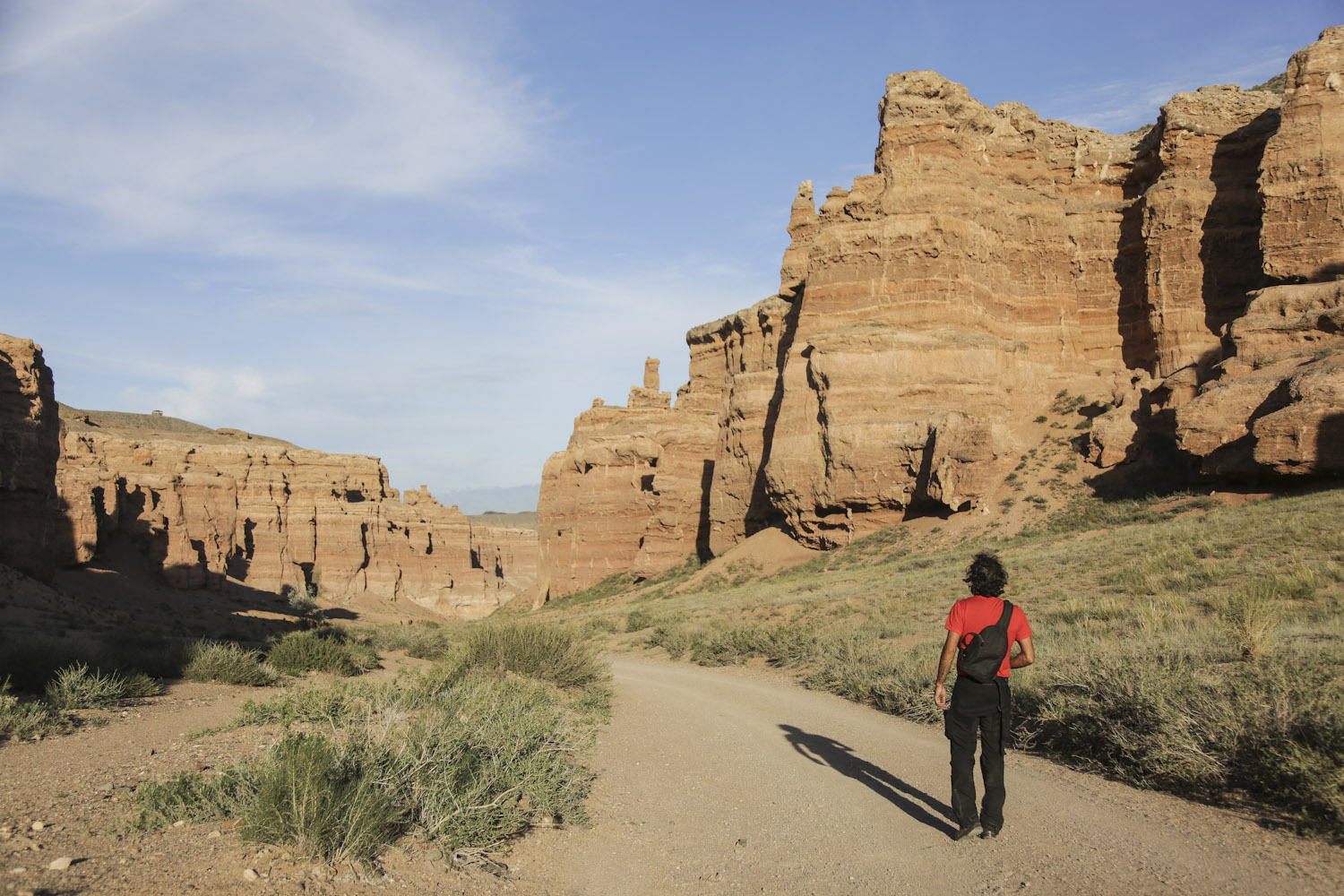 The Charyn canyon is located in Kazakhstan. Some of the cliffs of the Charyn canyon resemble fantastical figures as the names of the different valleys suggest: Valley of Castles, Ghosts and Devil's gorges. These were sculpted by erosion during more than 12 million years.

Falconry is a traditional art in Kyrgyzstan. Which bird of prey is preferred for hunting?

Golden eagles are known for their agility, speed, massive claws and hunting skills. When hunting, they can reach speeds of 300 kilometres per hour and can spot their prey from as far away as seven kilometres.

How much do you know about Central Asia?
Sorry, there is still a lot to be improved!
Try your knowledge with the quiz about Japan or the quiz about Laos.

If you fancy having more travel information about Central Asia, read our articles about Kyrgyzstan, Kazakhstan or Uzbekistan. These will surely inspire you to travel to this beautiful country!