When you are in Luang Prabang and take the ferry to go to the other side of the Mekong, you will arrive at Xieng Men cultural village, a small and quiet (almost sleepy) village. To visit Xieng Men, you can simply walk out of the ferry, up the slope and once at the top, just turn right towards a narrow, but well-signed street. 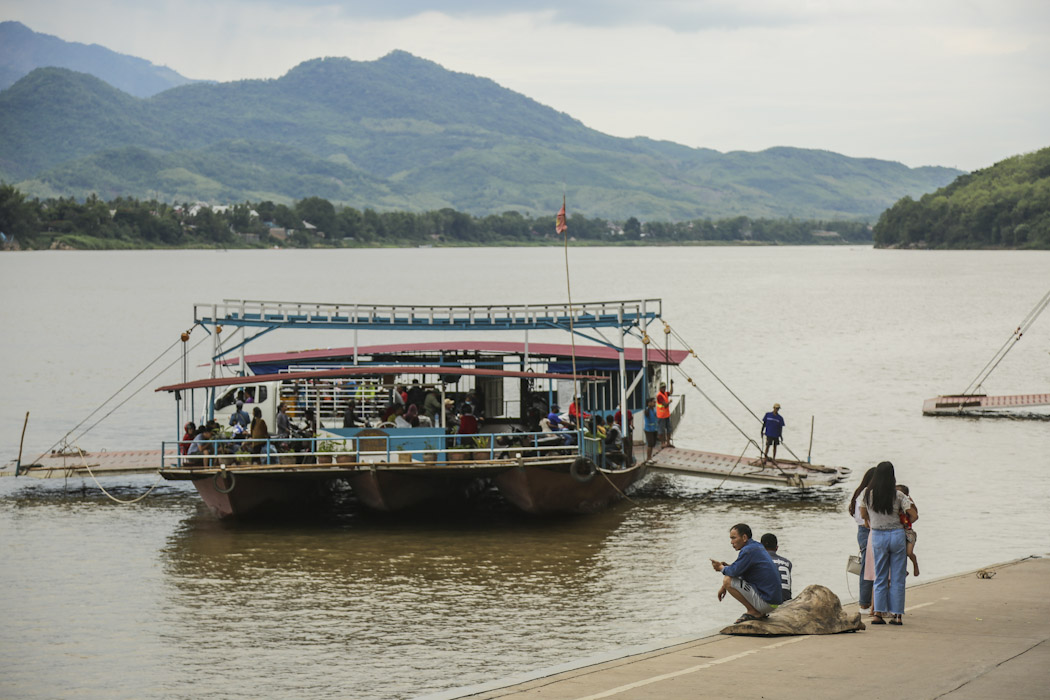 If instead of turning right, you continue straight and all the way down the slope, you can make a longer tour to reach the pottery village of Ban Chan. This is a longer tour, though, and it is better done with a bicycle or a motorcycle. As we were on bicycle, we combined a visit to the pottery village, the botanic garden and Xieng Men in a one day tour.

>> Read more about the pottery village

After visiting the pottery village, we returned with our bikes to explore the Xieng Men village. The village is a quiet alternative to Luang Prabang. There is one or the other guesthouse, and all the other houses are inhabited solely by locals, making this a more genuine place to stay. We found that here we experienced village life with a certain ‘glamour’, since many of the people who live here work in Luang Prabang. With hardly any cars, its architecture is thought for mopeds. For this reason, the streets and alleys of the village are very narrow, giving it a cosy feel.

Continuing past the village, and for a distance of around 3,5 kilometres there are seven temples that line the Mekong. These temples are not as exquisite as the ones from Luang Prabang, but their location is as pretty and much quieter. Once the last houses stay behind you, you will soon reach Vat Chom Phet, a temple that offers excellent views of the Luang Prabang peninsula. For that you need to climb a length of steep stairs and pay 10,000 kip to the guardian – an entrance fee that you will have to decide on your own if it’s worth it. The views, we thought, were pretty much the same as we had along the way.

After cycling for a few more minutes on the main path, we arrived at Vat Long Khoun, which looks like a monk village. The temple complex is made of several buildings. Besides the congregation hall (the sim), there was also a beautiful open air dining hall, and the other usual communal buildings. They also had many tiny wooden houses where the monks sleep (the kutis). Although we didn’t see any monk here, they surely live there, because we saw many of their robes hanging out for drying. As it was lunch time, and there was a scorching heat, they were probably having a rest indoors. We liked the atmosphere of this specific temple very much. It felt like an enchanted village in a forest.

The Long Khoun complex was built in the 18th century and was used as accommodation for kings, before their coronation ceremonies. Perhaps for this reason it is such a distinct temple complex. It is said that King Sisavagvatthana himself became a monk and studied Buddhism in this temple. Considering its peaceful location, it is also unsurprising that the practice of walking meditation is popular here.

Considering its peaceful location, it is unsurprising that the practice of walking meditation is popular here.

We also liked that the entire grounds of the temple were very well treated and clean. We wished they accepted people who would like to be introduced to meditation. Unfortunately, this temple is reserved to monks and novices, so we had to keep looking for a place to meditate along this restful trail.

The further away we were from the village, the denser the vegetation got. As there were more trees and less people, it felt as though we were deeper in the forest, but we did not move away from the Mekong. Soon, we were arriving at the next temple, which was also a very particular one from the architectural point of view. Vat Tham Sakkarin is a small building, whose walls are completely covered in colourful paintings. The paintings were so many and divided in square sections reminding us of a cartoon.

The temple was built in 1902 during the reign of King Khamsouk Sakkarin, hence its name. The unique wall paintings definitely depict stories which are known to Buddhists, we were sorry that there were no explanations for visitors to learn a bit more about them.

To the left side of the temple, there is a set of stairs leading up to a small hill and that take into a cave. It’s a very large cave which served as shelter to the population during the Indochina wars. Some hermit monks lived there for a period of their lives and perhaps they were the ones who made the drawings on the walls. If closed, you can ask the monks for the keys in case you would like to visit it.

We were getting hungry and thought that we should start looking for a restaurant, but along this trail, as we were about to find out, there were no restaurants. Just before reaching the next and last temple – Vat Hadsiaew – we saw a large two-storey building where many people seemed to be eating, so we thought of coming back here later, after visiting the temple.

The Vat Hadsiaew complex comprises many buildings, one of them caught our curiosity, because we hadn’t seen another one like this one in the entire country. It was a very long house with no windows, just a few tiny square holes on the wall and one unique door. If someone knows what this building is used for, please let us know. The old sim is a small hall with beautiful frescos on the walls inside and outside.

By the time of our visit, many young monks were building a new huge building, which they told us will soon be a hotel for meditation. The temple monks have the plan to start receiving guests who would like to stay longer to have meditation classes. This seems very appropriate, especially in this location, beautiful and quiet. We wished the works were already finished and we could stay some days here to learn how to meditate.

We had cycled for almost four kilometres and after having left the village, we had hardly seen any people and the handful of houses we saw, looked to belong to poor families, so we wondered how the monks ate! There weren’t many chances for them to practice the almsgiving around this area. So, they told us that every morning at 5h30, the monks of this temple take a boat and go to Luang Prabang to get the almsgiving from there. Then they return to the temple for their lunch, and will not eat again until the next day, after returning from Luang Prabang again…

At 5h30, the monks of this temple take a boat to Luang Prabang to get the almsgiving from there. Then they return to the temple for their lunch, and will not eat again until next day…

After the visit we returned to that building that had looked like a restaurant. As there was no sign, we asked the kids outside if the place was a restaurant, making hand signs which we hope meant “can we eat here?”. Their nod was a confirmation that we were right, and we went straight inside.

A few Buddhist nuns were sitting on the first floor and we asked them again the same question and their answer was a clear “no, this is no restaurant”, but they showed us the first floor, where we had seen people eating. There indeed, there were many people eating together, but it didn’t look like a restaurant. A lady, Davone, came towards us, and thankfully she spoke perfect English. We told her again what we were looking for and she replied, that this was a Buddhist nun’s monastery, not a restaurant. But her family was celebrating and we were welcome to join them because there was plenty of food that needed to be eaten. 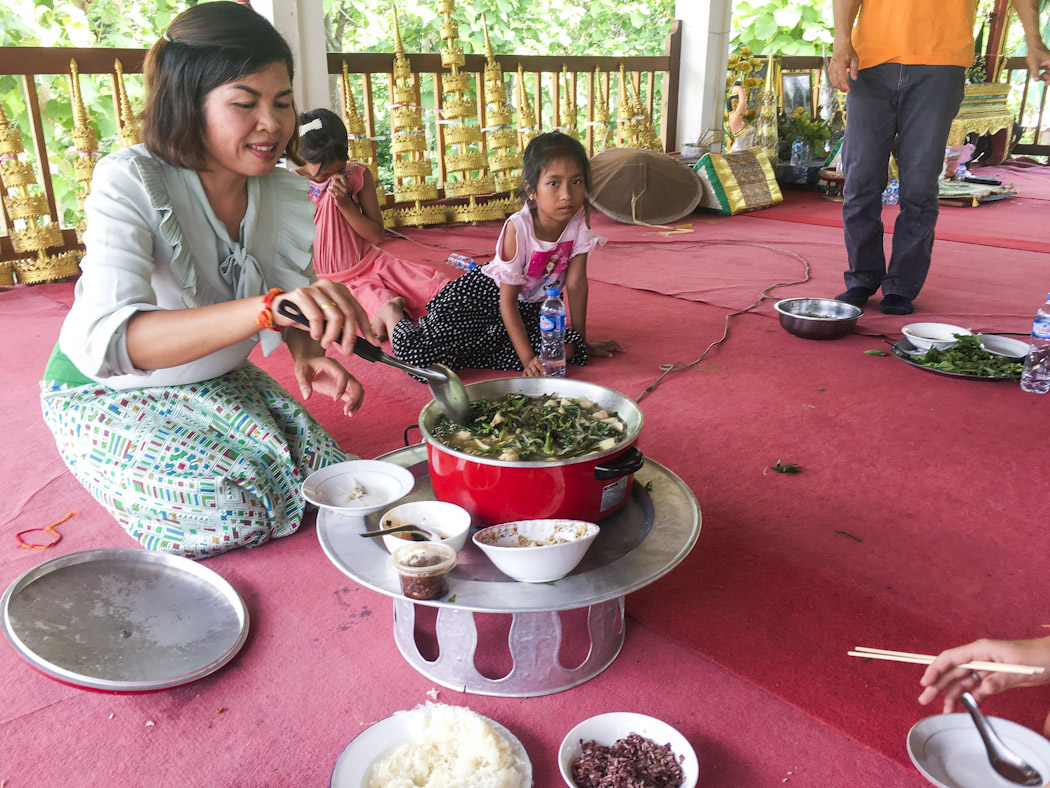 Davone also explained that her son and brother-in-law were going to be ordinated monks after lunch and if we wanted to join the celebration in the temple we were welcome. We were delighted to be able to witness such a unique and intimate ceremony and accepted both offers.

>> Read more about this monks’ ordination

After the ceremony, the family headed to another temple beyong a small hill. The path is well indicated by the statues of two terrifying guards. As soon as we arrived at the top of the hill, there were many Buddha statues. The women stopped to burn some incense and we realised we were in a cemetery, the first one we had seen in Laos.

After reaching the temple on the other side of the hill, they said goodbye to Davone’s brother-in-law, who would be staying here in this remote temple, where there were no other monks. He would be here on his own for as long as he wished. This is what fascinates us so much about Buddhist monkhood, one can remain a monk in the temple for as long as one wishes, and one can return to civil life whenever one wants, without ever carrying the burden of being stigmatised. On the contrary, children and adults alike are encouraged to spend a period of their lives in the temple, in order to learn self-control and meditation… 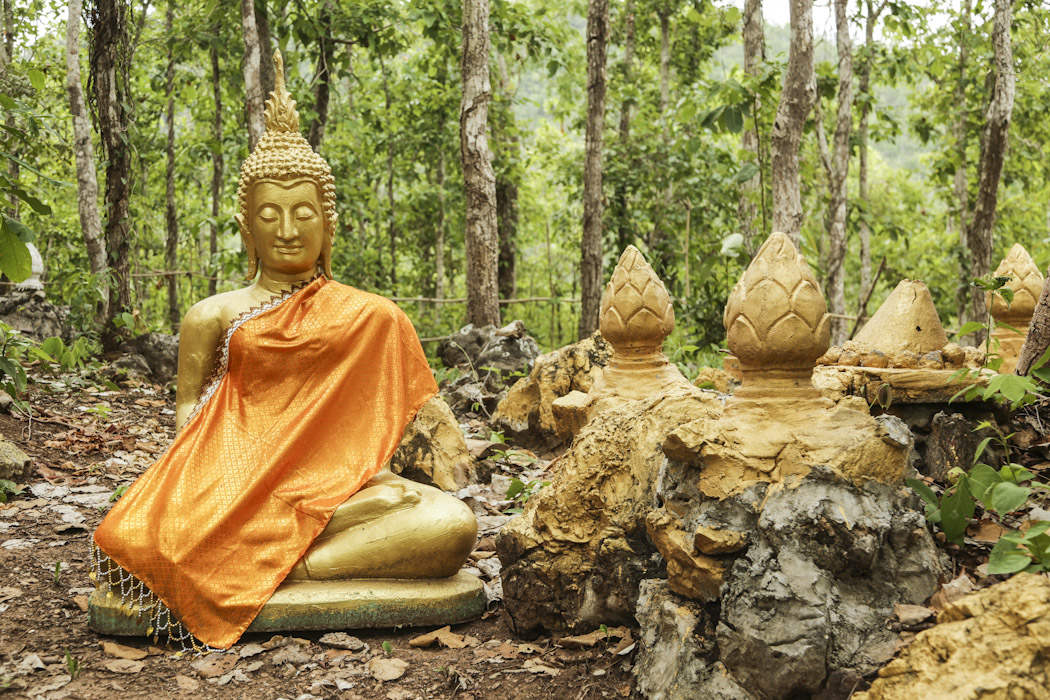 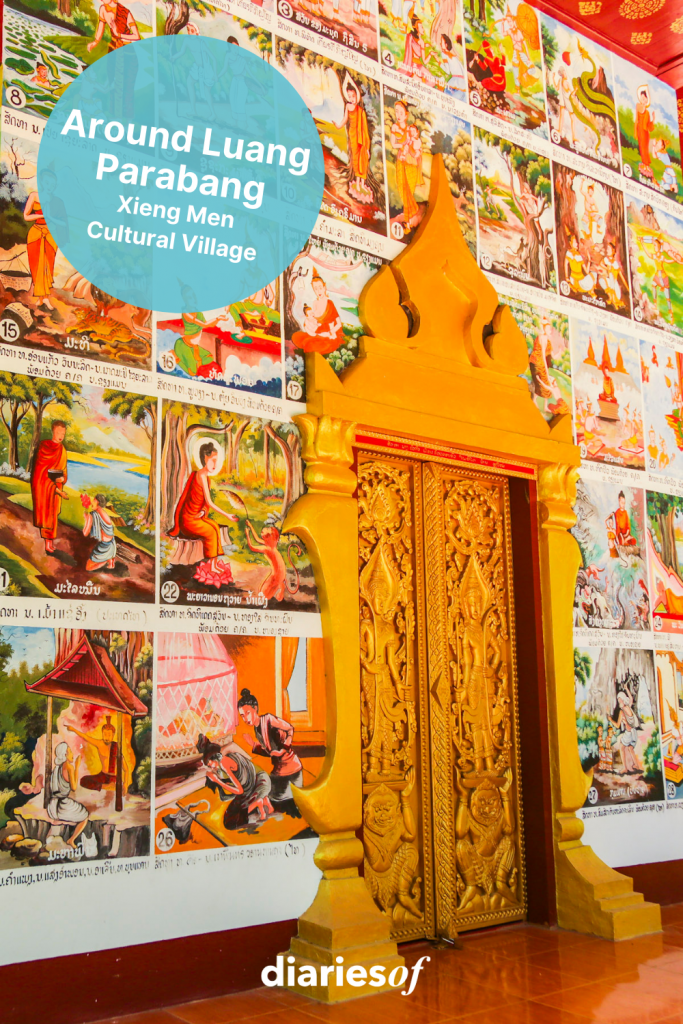 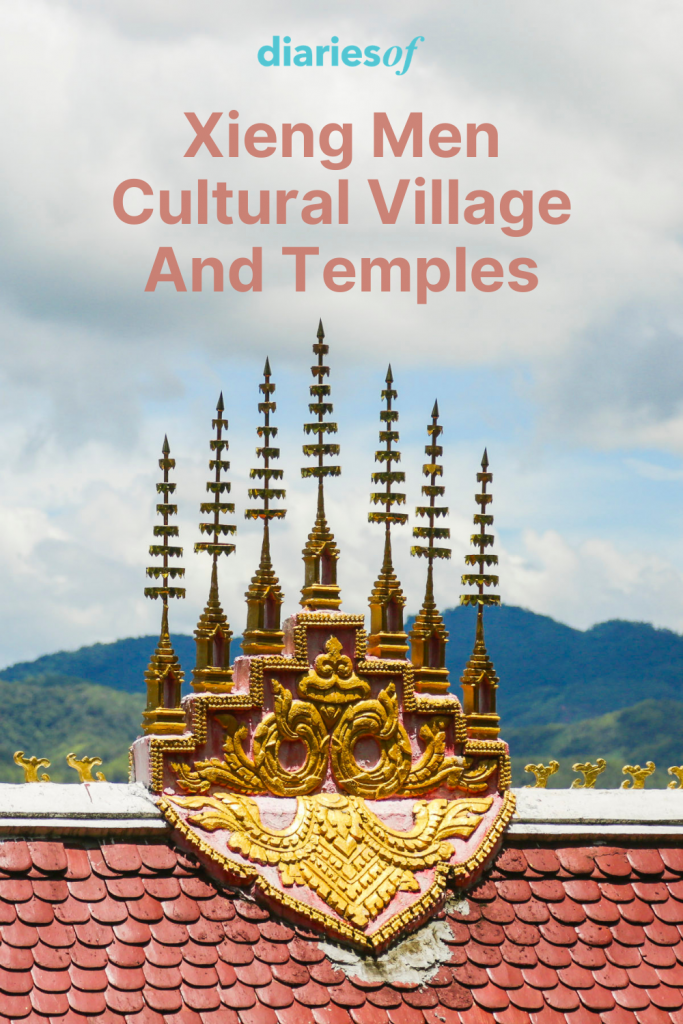 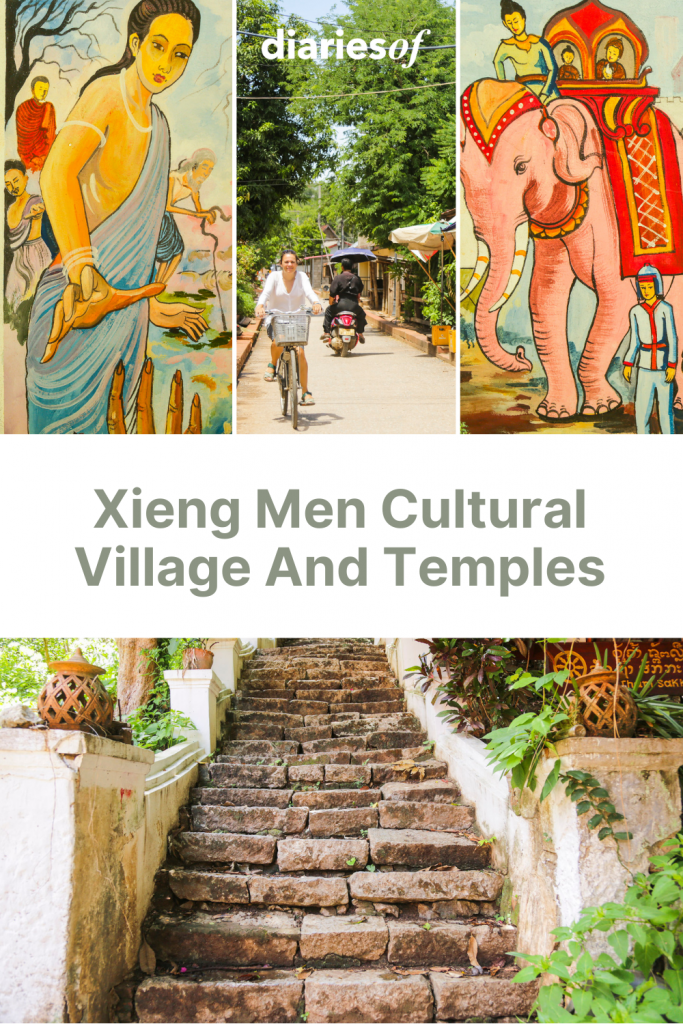