Sailing in croatia - the Dalmatian coast off Zadar

The experience of sailing in Croatia has been on our radar for a long time. Several friends of ours, who have sailed off the Croatian coast before, have recommended the experience highly. Since then, we have added it to our wish list and were hoping that an opportunity showed up any time soon.

As with so many goos things in our lives, the opportunity came in the shape of an invitation from very dear friends. The prospect of combining a trip with close friends to sailing in Croatia was enticing and we have to say, it turned out to be a great experience! 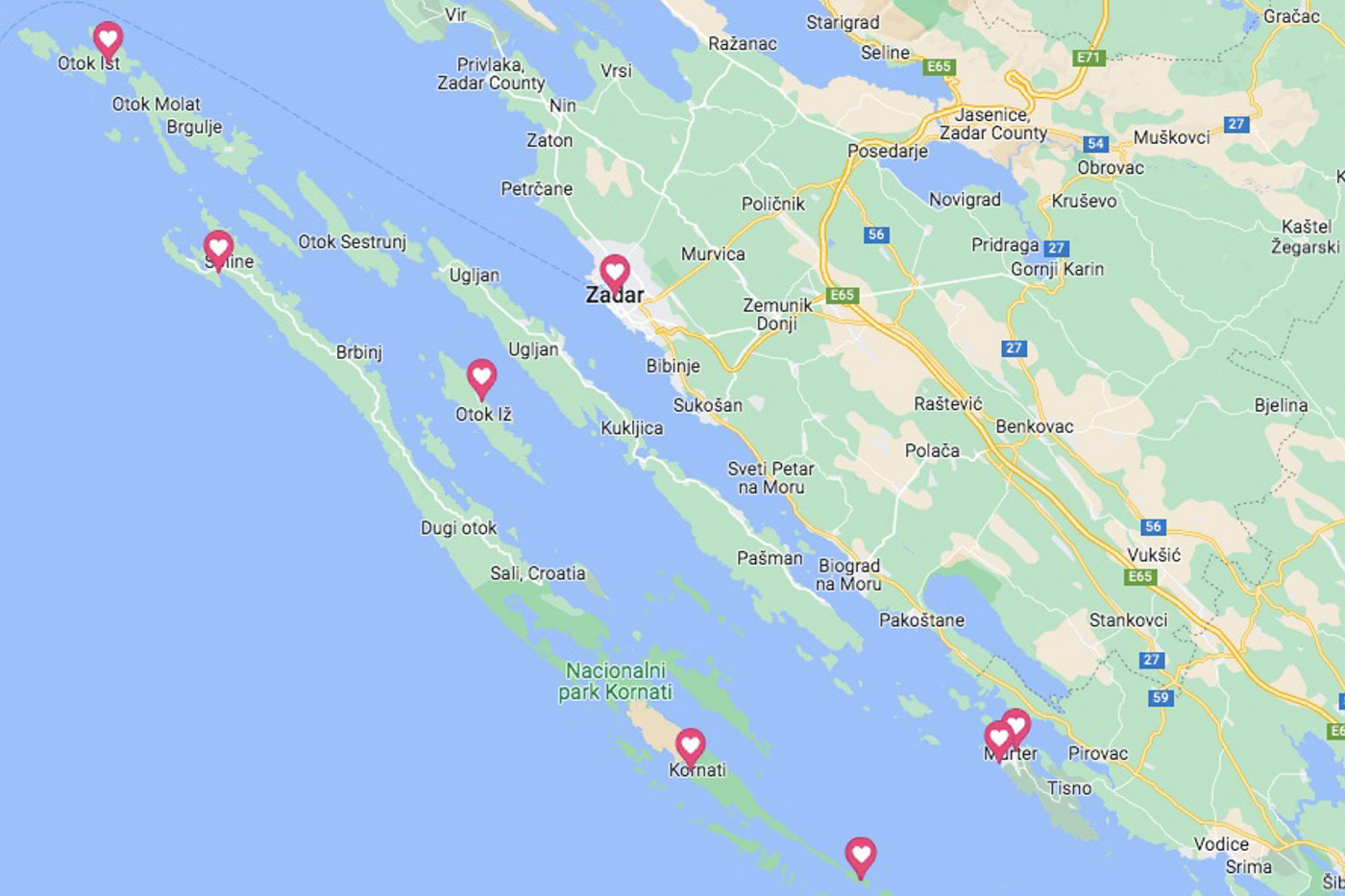 From Zadar, the original plan was to head southwards, but the weather and sea conditions decided differently. Unfortunately, heavy storms and strong winds were blowing off the coast of Italy, heading to Zadar, so our captain decided it would be safer to sail northwards and search for a safe haven for the night. 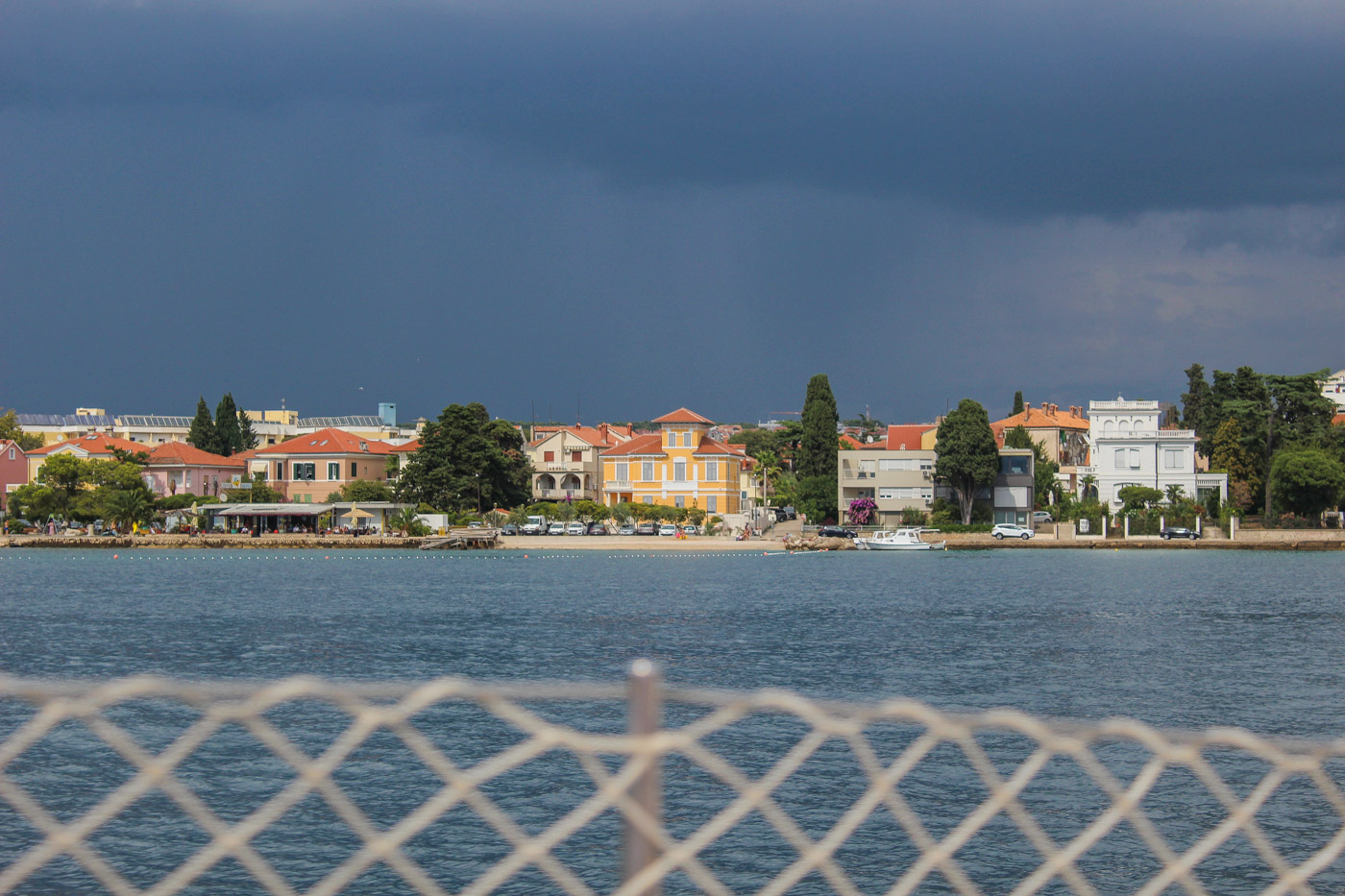 He contacted several marinas, but it was difficult to find a free spot in any of them, as all boats were desperately trying to find marinas, where boats would be more protected from winds than if they moored on buoys or anchored on bays. We were not sure if we should worry, our skipper and captain Doma remained serene, which was enough for us to feel safe. His experience decided that we would be safe in the tiny bay of Ist Island (Otok Ist in Croat), because, even though the bay was facing south, it was very much protected by its neighbour island, and he promised we would hardly feel the sea undulation. 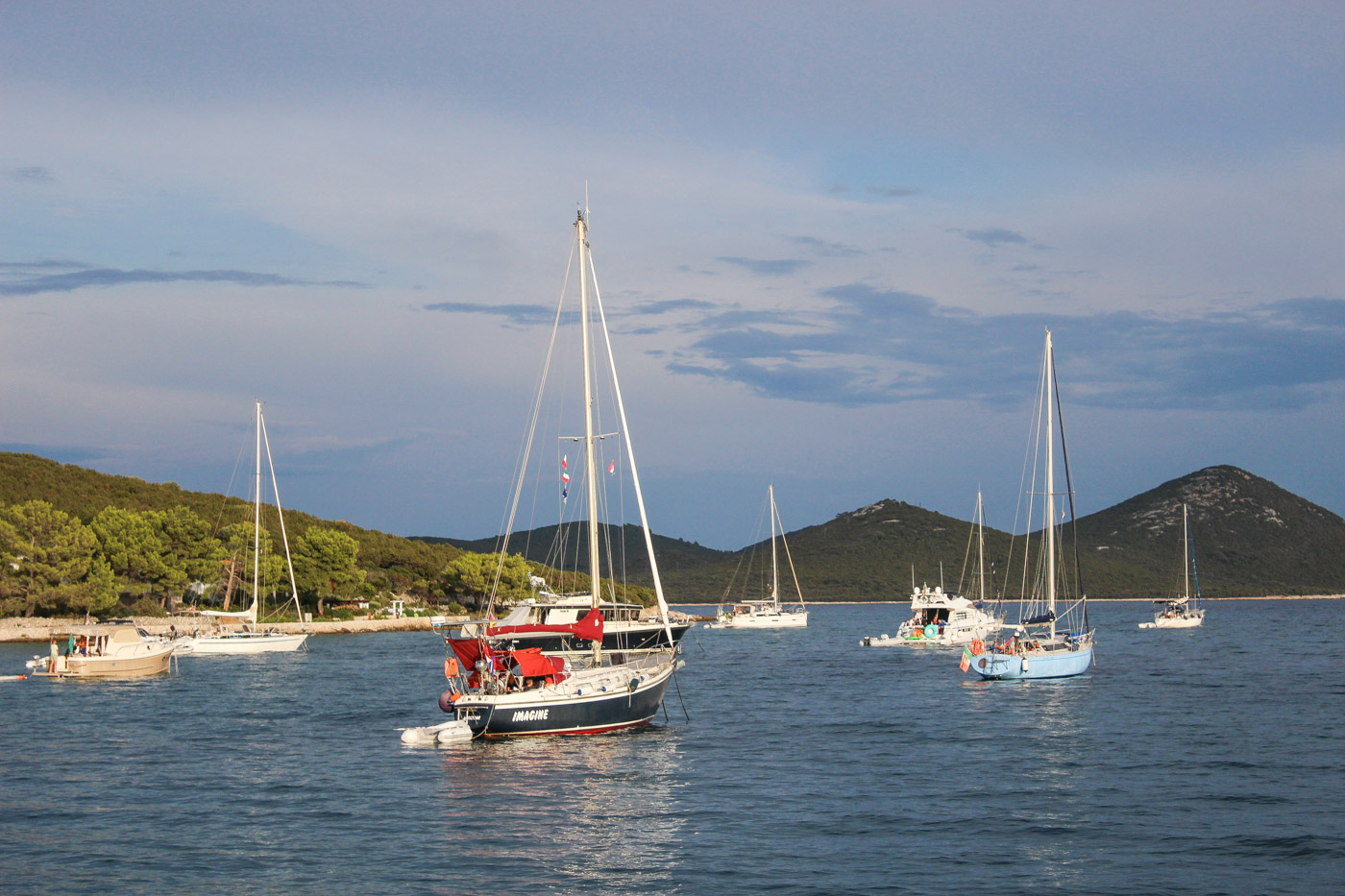 He was absolutely right. After choosing a safe place to anchor, we prepared for dinner in the island. Doma took us by dinghy to the coast, and because the dinghy was quite small and we were a total of eight persons (with the skipper), he had to do the crossing a couple of times until we were all reunited in the familiar restaurant ‘Katy’ on the coast. 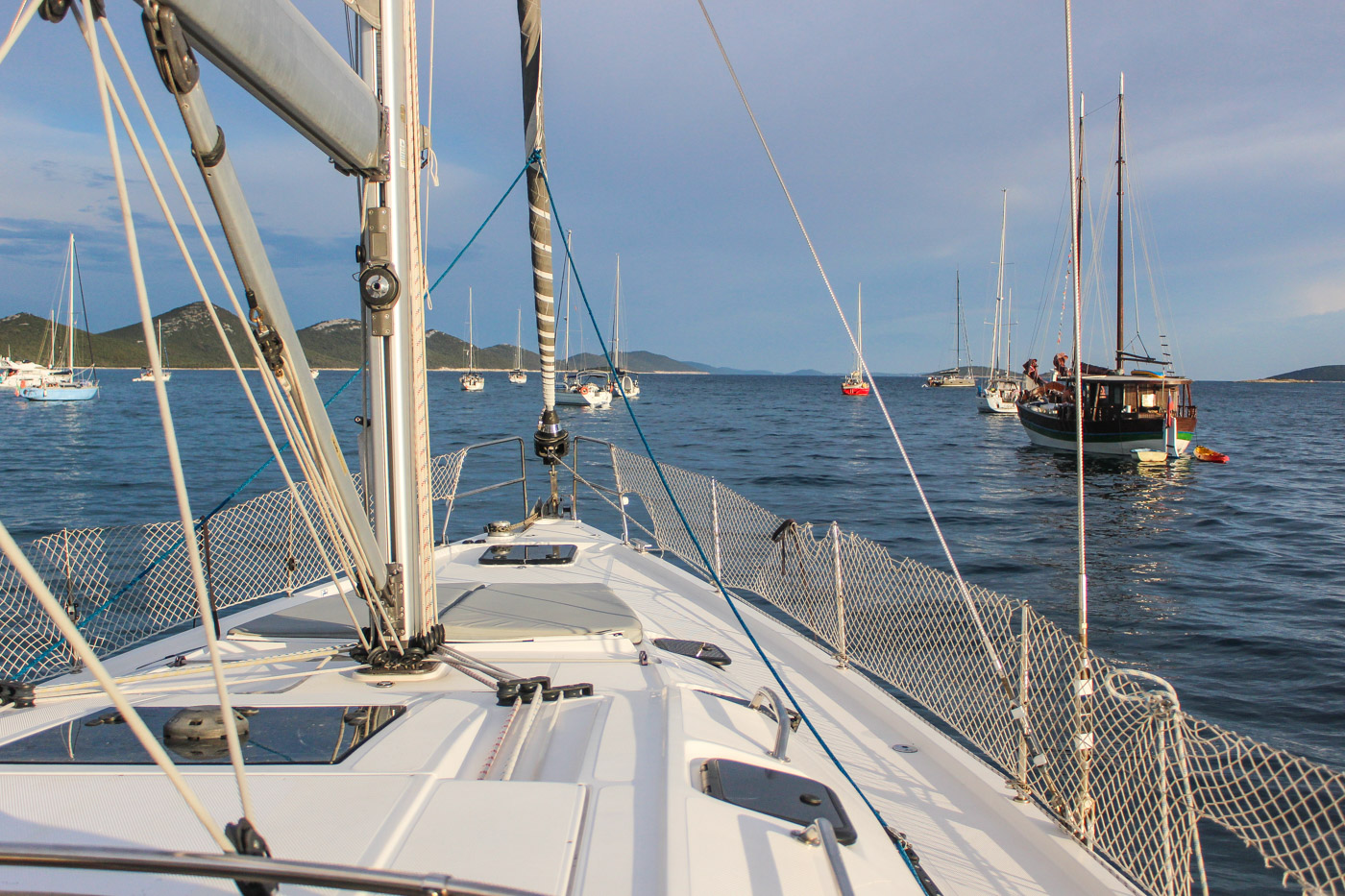 The restaurant didn’t show us a menu, Katy, the owner, came to our table and told us they had fresh bass, and that would be our dinner. That, and an enormous selection of other delicious marine creatures as starters: octopus, clams, tuna carpaccio. Everything had been caught by the local fishermen and everything was fresh and delicious. What else could you wish for? 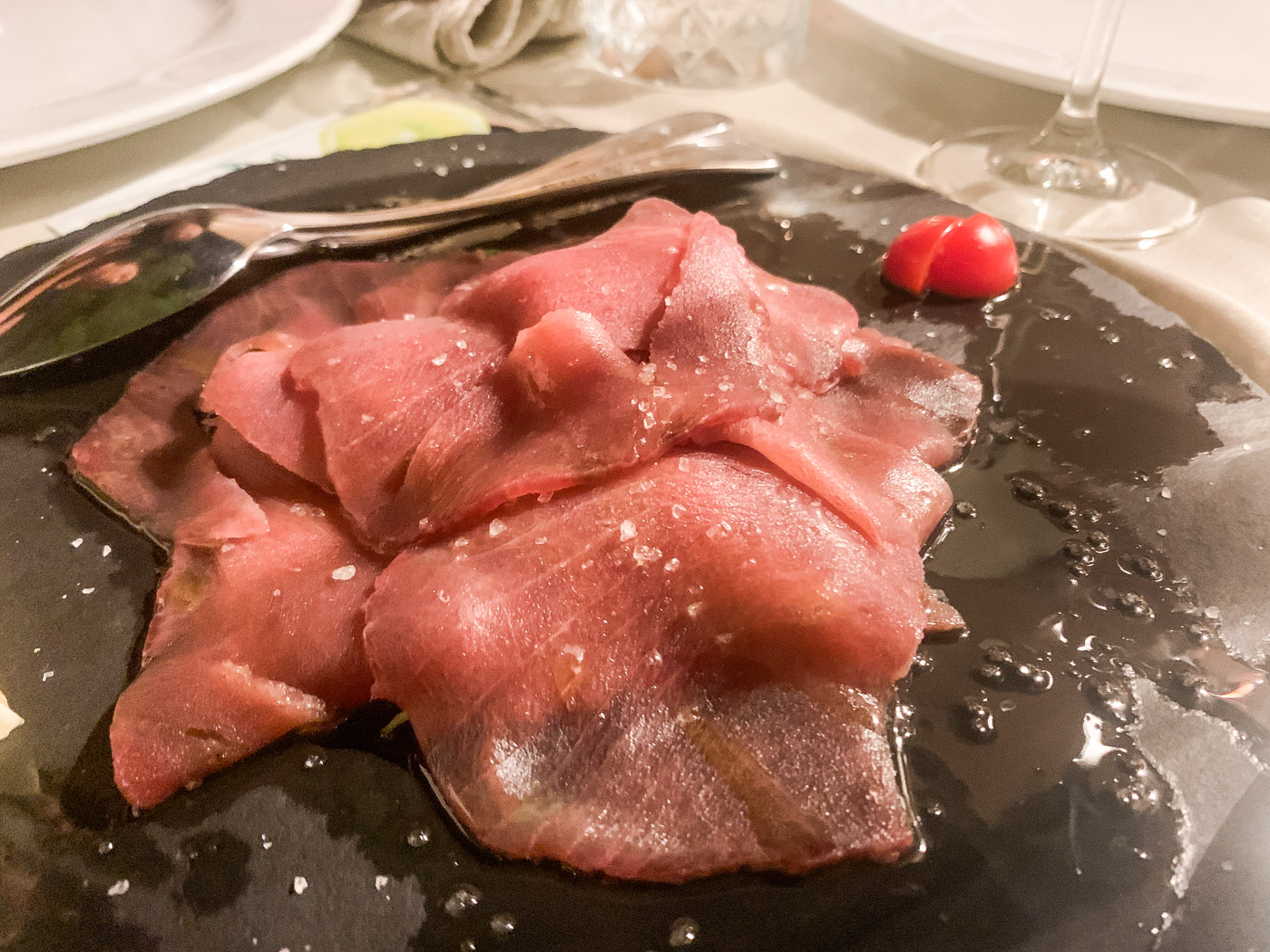 After such a delicious meal, we were ready to go back to the boat. That night, anchored in the middle of the bay and having a couple of other yachts around us, we had one of the most special nights on the trip. Embraced by the darkness of the night, and with a few stars above us, we chatted and danced with our friends, on the deck of our yacht, to the sound of Luciano Pavarotti. Priceless! 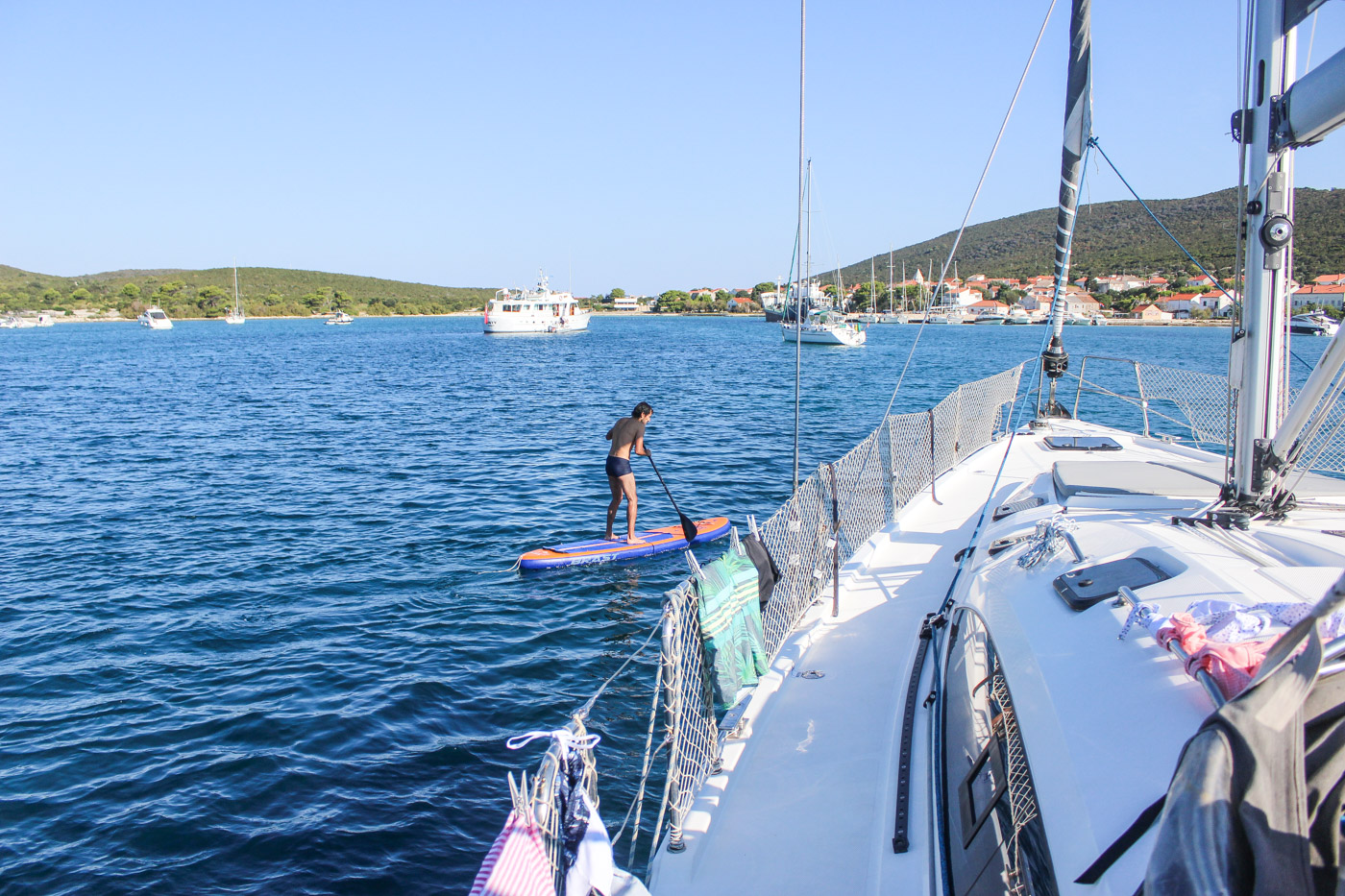 In the next days we found a delicious routine that consisted of starting the day with a swim or with exercises on the stand-up paddle. The kids particularly loved the paddle and were eager to be the first to take it to the water. We took all the time that we needed, and when all were satiated of water, we came to the yacht and slowly started preparing our breakfast. In the meantime, our skipper would start maneuvering the boat to take us to the next destination. 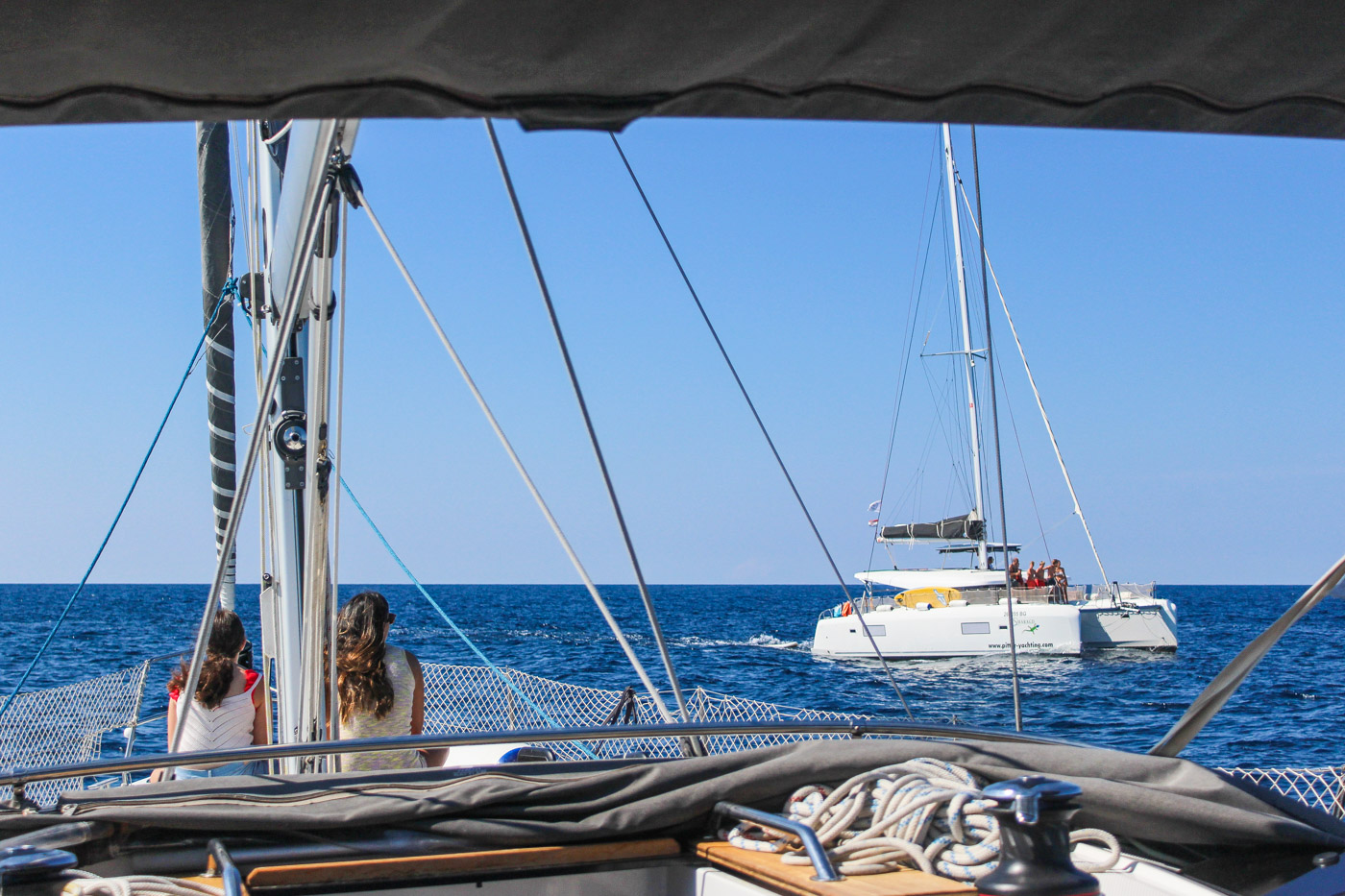 When we were sailing, we each found our favourite place on the comfortable yacht Elan Impression 50. While some preferred to sit (or sunbathe) at the deck, others preferred the cockpit or the stern. But everyone enjoyed the views, the breeze, the smell of the sea, and, of course, the incredible remote beaches that Doma took us to. 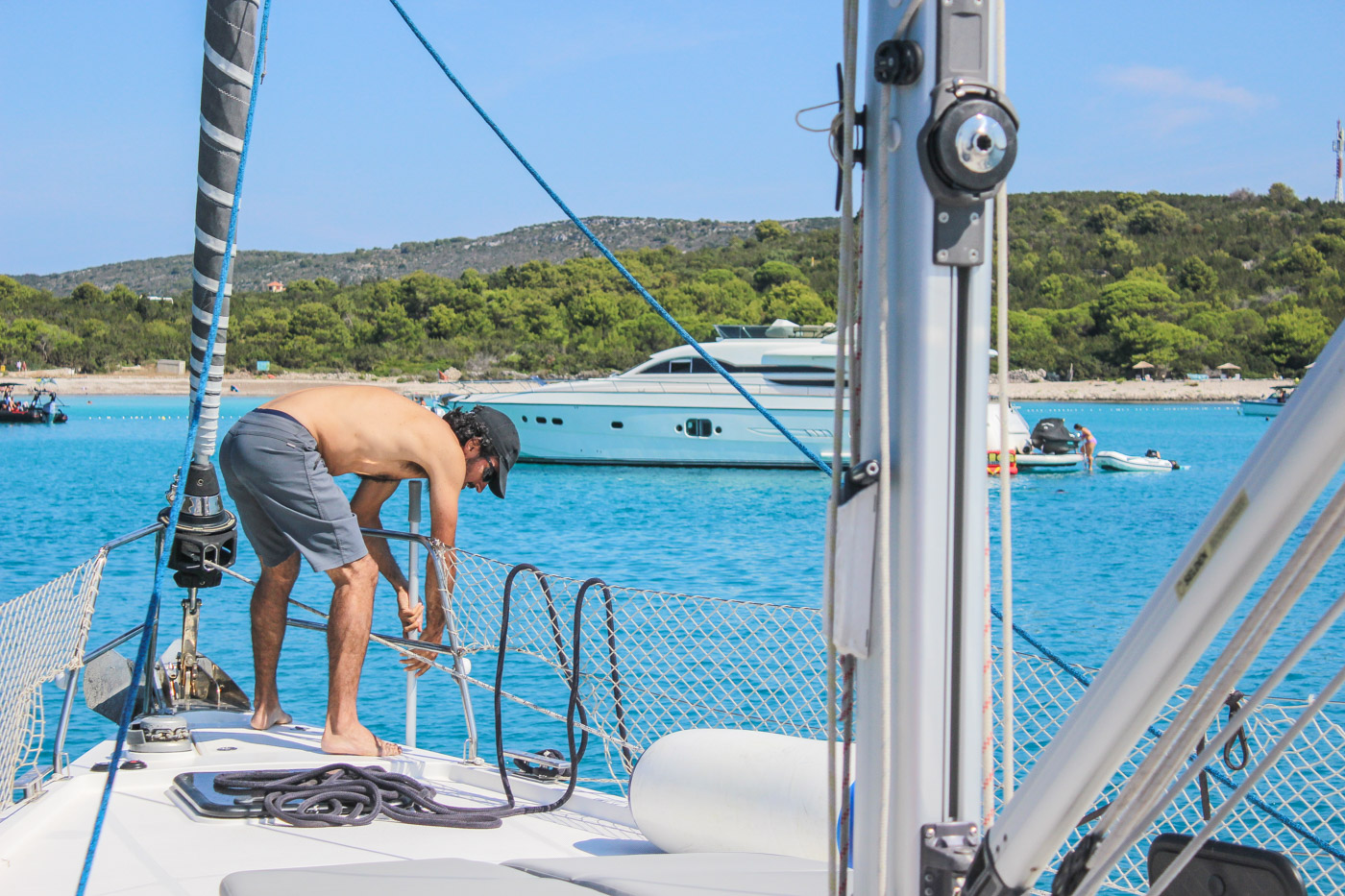 The pristine and turquoise waters of the beaches in Croatia are renown all overt he world, but luckily, when travelling on a boat, through the many islands off the coast, we had access to beaches that see very few visitors, because they are mainly reachable by boat. One of our favourite beaches was Sakarun, located on the northern end of the island of Dugi. 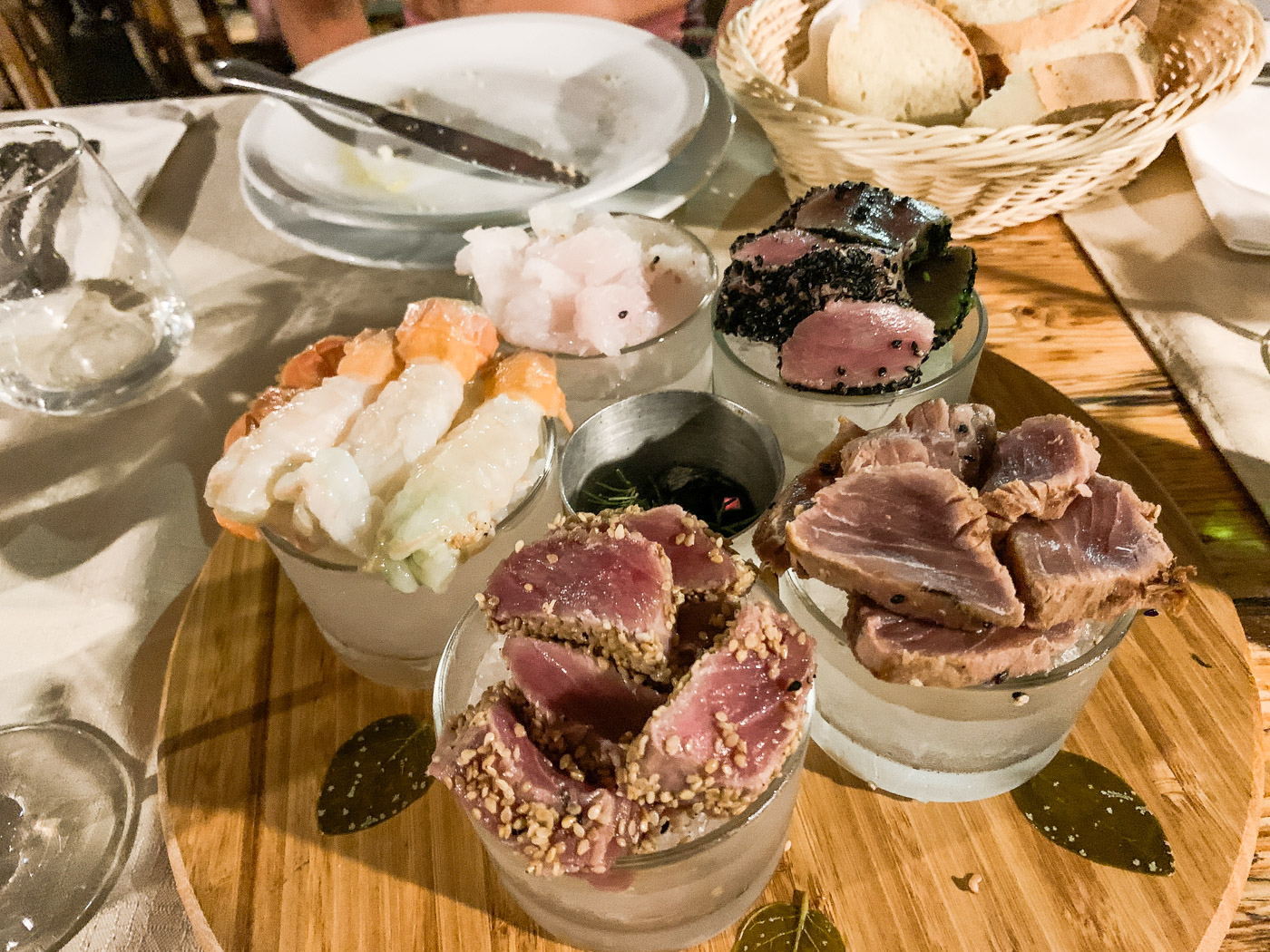 It was a pleasure to swim from the boat to the beach, and the best part was that we knew we would be rewarded in the evening with delicious dishes from the restaurants that worked from their own pier in other remote places in different islands. Raw tuna and roasted bass were a constant on the menu, and we became big fans of these dishes. 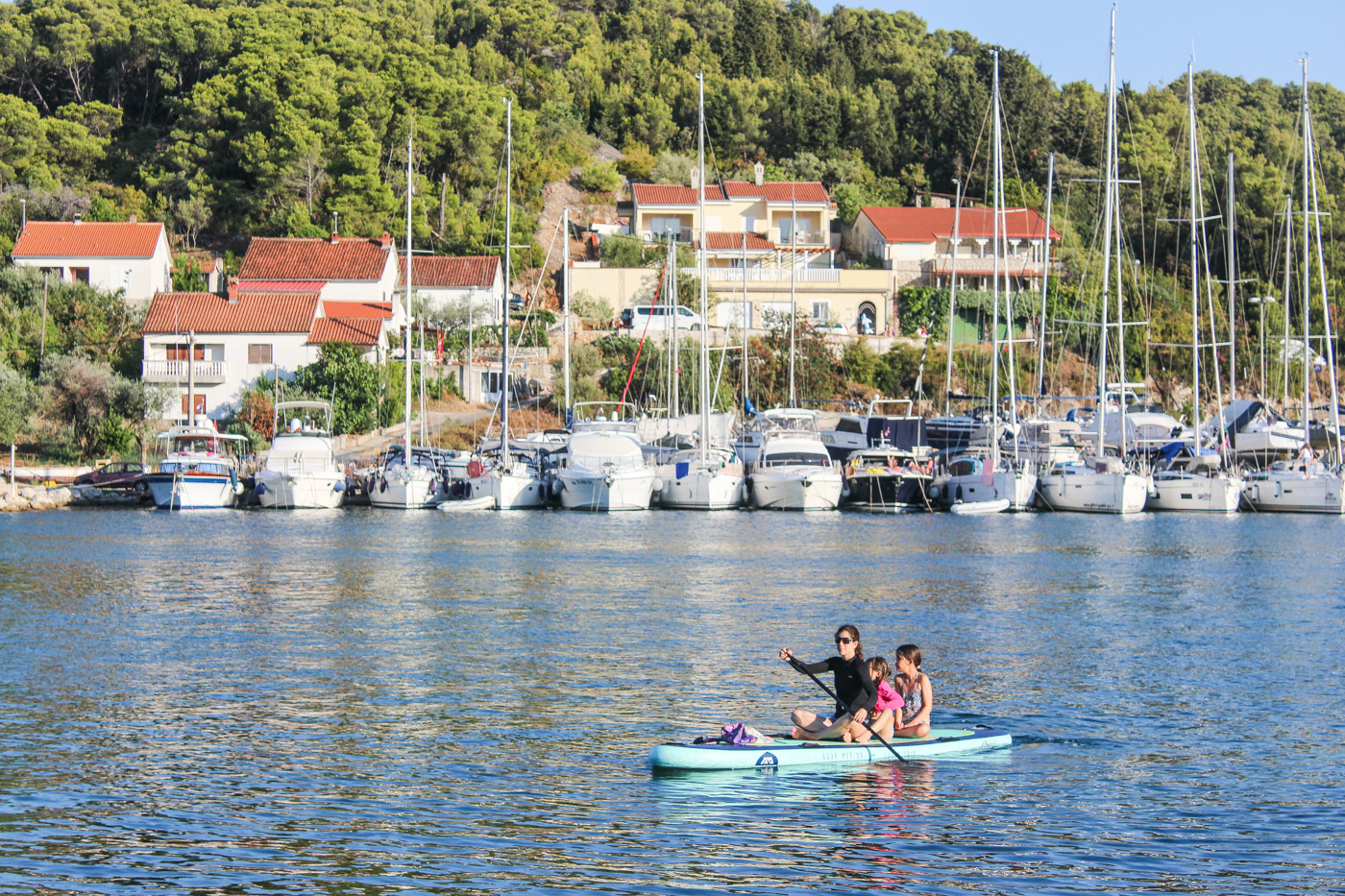 While it was incredible to visit the remote places where only one or the other restaurant operated from their own pier, it was also very special to stay in marinas located next to small villages. That’s what we experienced when Doma took us to the island of Iz. The ambience was of a tiny village, the the one or the other restaurant, a groceries shop and of course, the ice-cram shop. 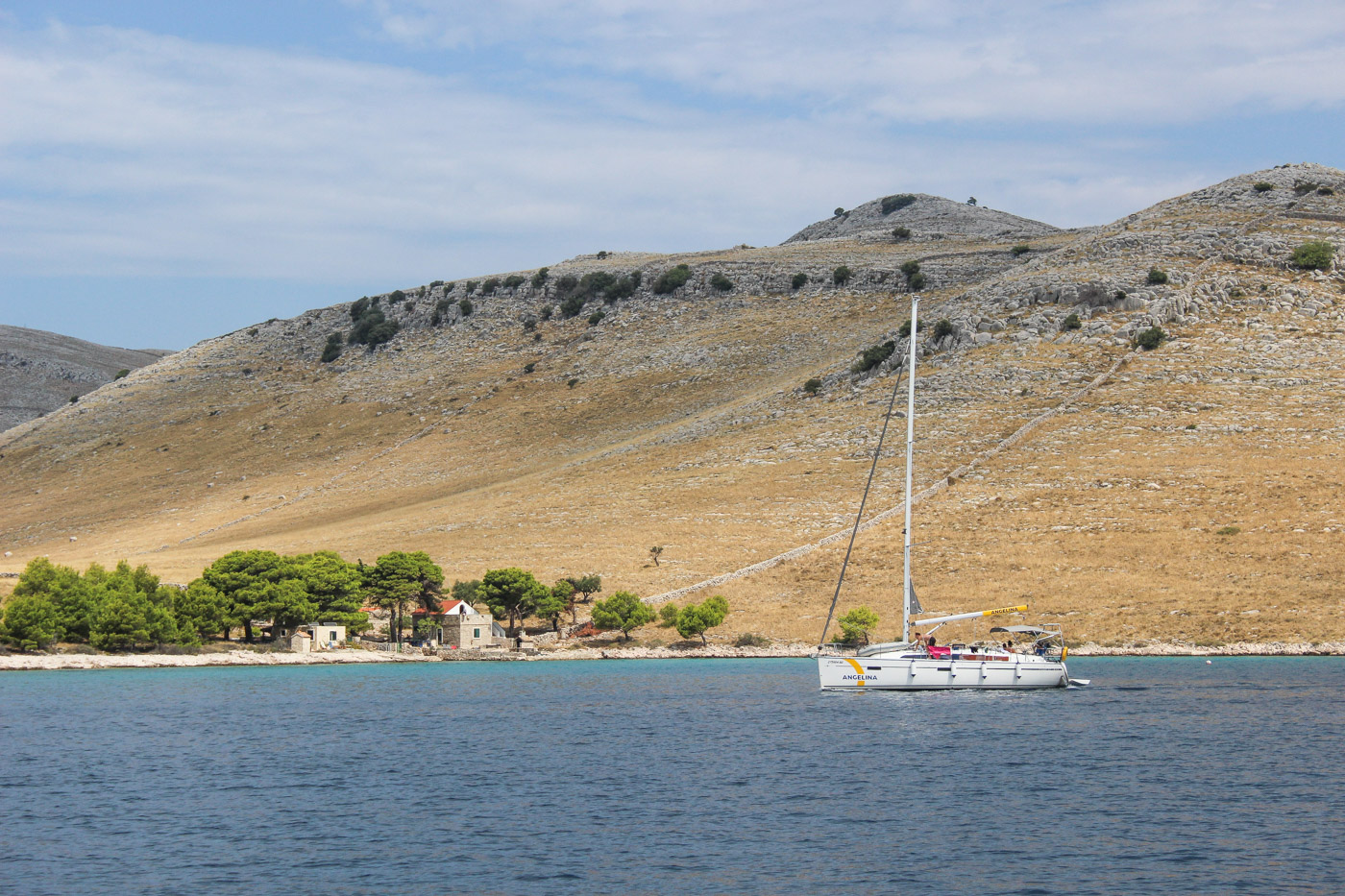 Besides traditional villages and hidden beaches  this trip would still bring us to another very special place.In the next couple of days we would be sailing through the Kornati National Park. Made up of 89 islands, islets and reefs, this national park is better visited by boat. We sailed through some of the islands and decided to have a pier for the night in one of them. As soon as we moored, we decided to climb to the top of the island for better views of this small archipelago. 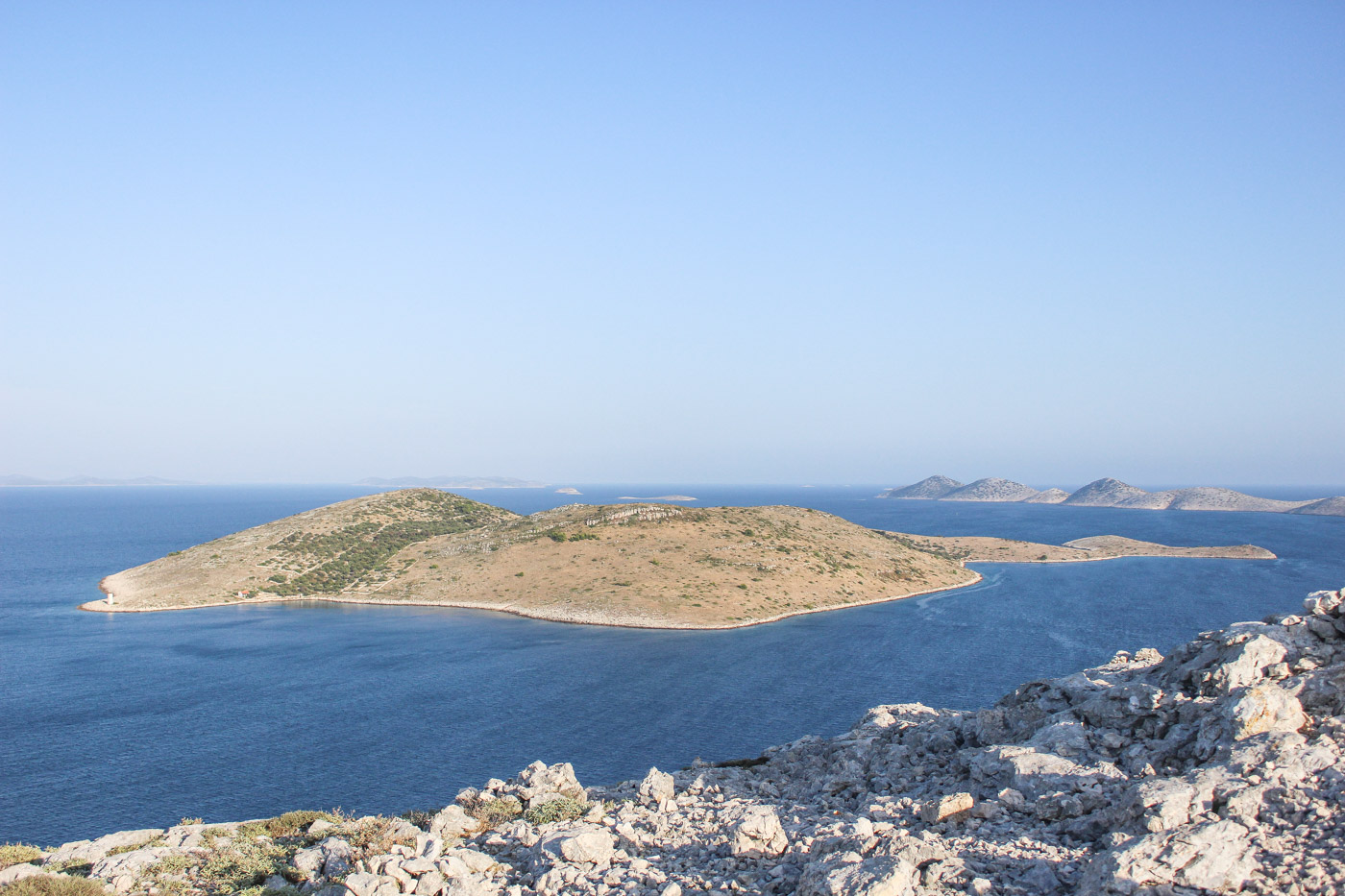 It was only when we arrived at the top of the island that we got a better impression of the dimension of this park, which spreads for about 14 kilometres and with a sea area that corresponds to about 320 square kilometres. The hike to the top took us less than one hour, through a trail that is not marked, though there was no chance of getting lost as we never lost view of the sea, obviously. 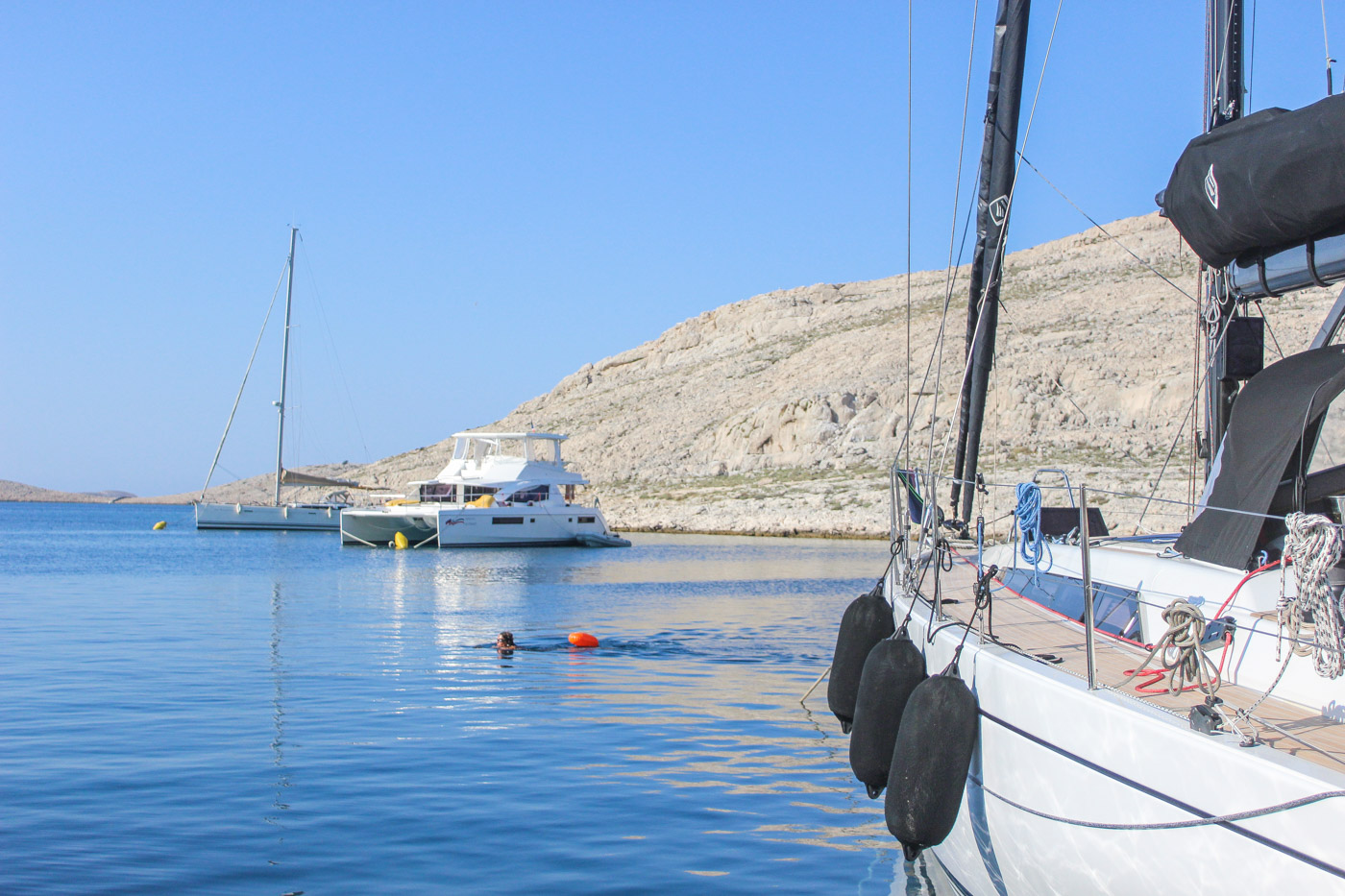 The next day we woke up to a still sea. Again, we did’t think twice, and without hesitation started the day with a swim at the beautiful Bien à toy where we had spent the night. At breakfast on our deck, the captain informed us that the weather was changing quickly and that strong winds were foreseen to reach us at around noon. 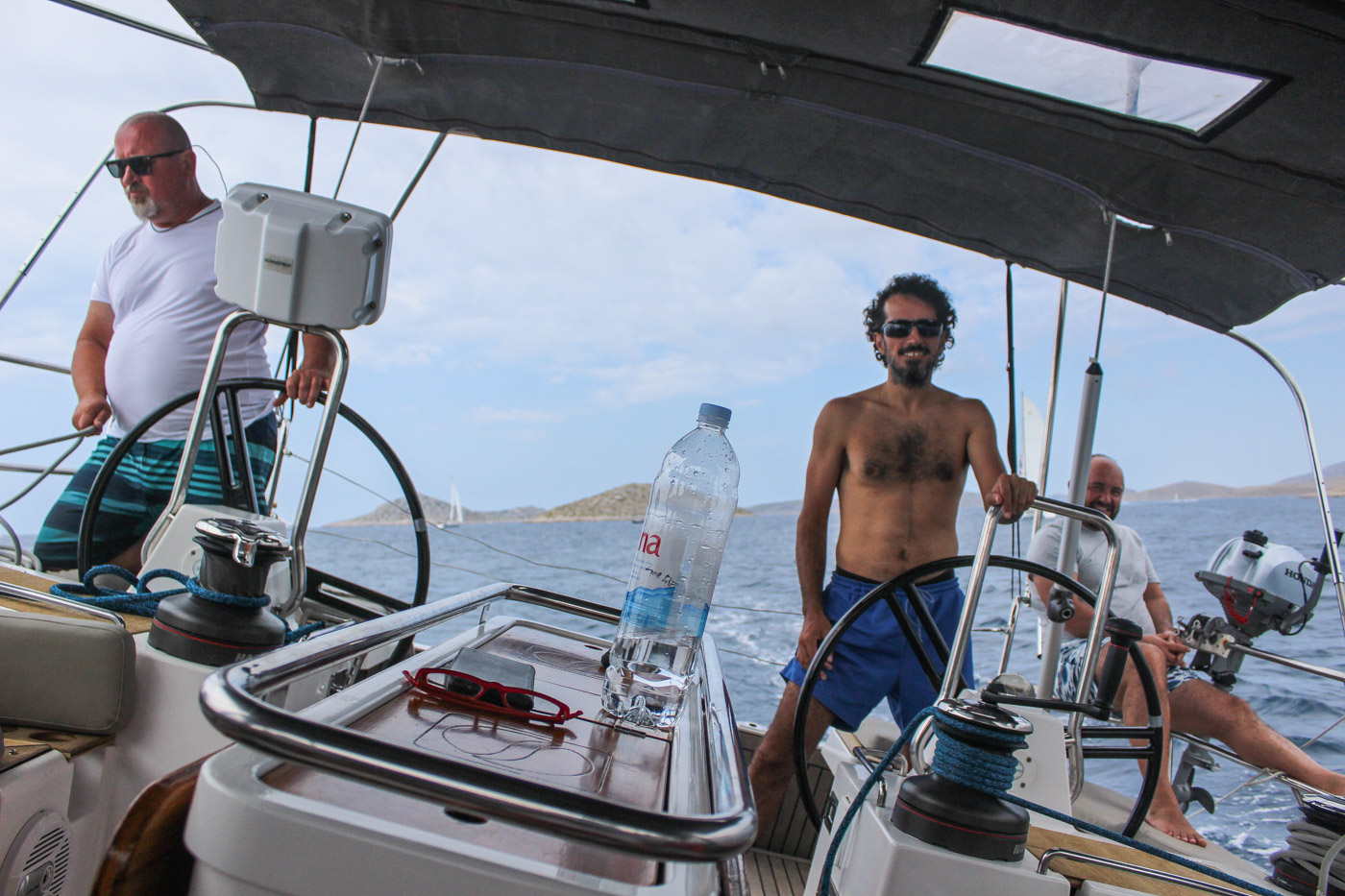 This meant that we would have strong winds and that the sailing would be a little bit more bumpy than in the previous days. Not all of us were terrifically excited about sailing at twenty knots, specially when the boat tilted to a position that did not allow us to stand, walk straight on the deck, not even cook lunch, which was exactly what we, girls, were trying to do at that time. 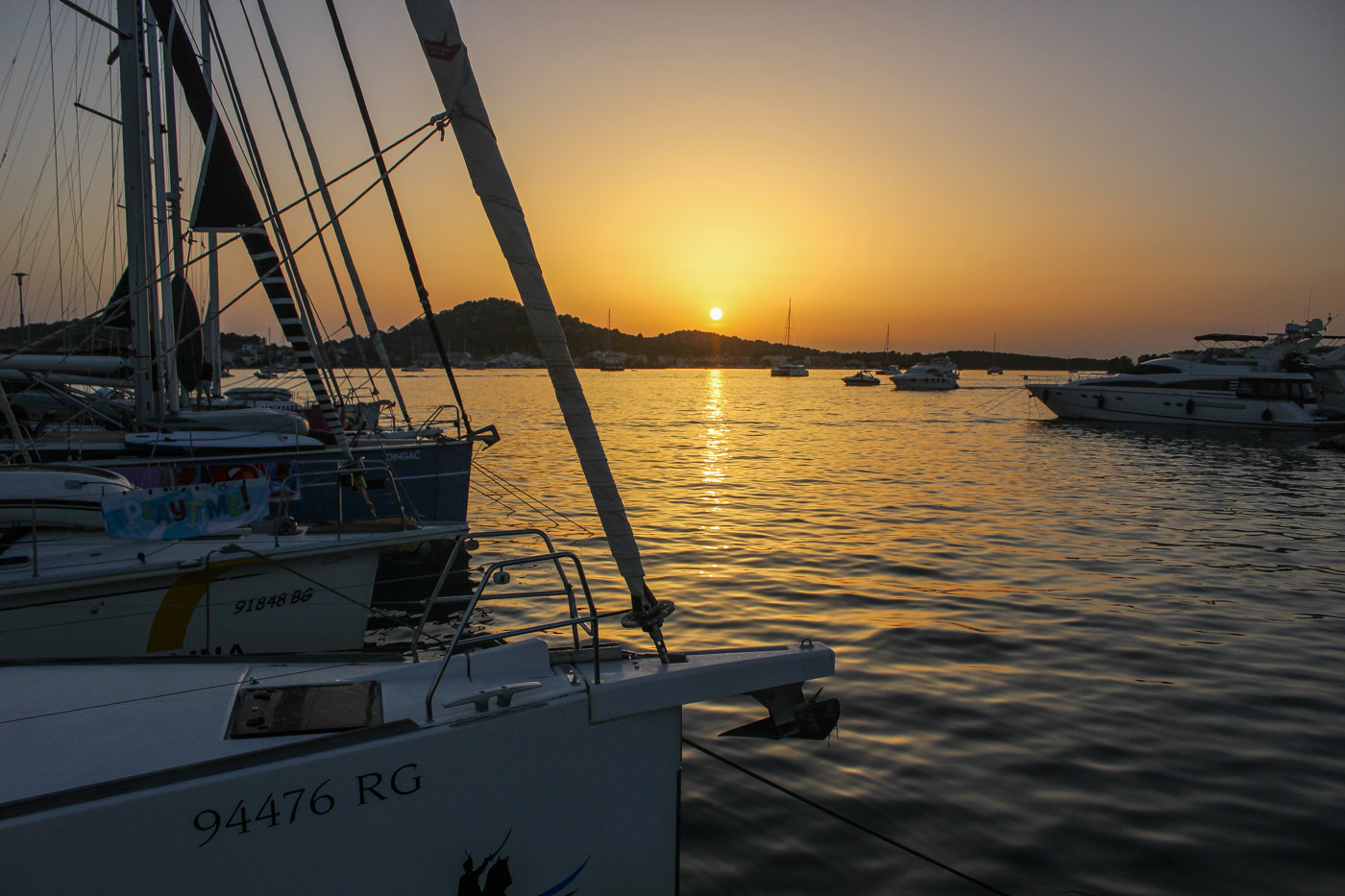 Our week o board the Mojito passed way too quickly! One day we were starting off from Zadar and in the next day we were already returning… This can only mean that we enjoyed the experience a lot and that we are certain we will give it another try as soon as possible. We can only recommend it to anyone who has not yet sailed, or to sailing lovers who haven’t been to the beautiful Dalmatian coast yet…