Angkor Wat temples in one day? Is it possible? Yes, it is if that’s all you have to spare. See below how you can organise your day to enjoy the day and the temples to the best…

What is the Angkor archeological complex? Angkor used to be the capital city of the Khmer empire from the 9th to the 15th centuries. The area expands for around 400 km2 and comprises more than one thousand temples, the most imposing one being the magnificent Angkor Wat, which is also the world’s largest religious monument.

The site is not only an example of Khmer’s fine architecture but also of Khmer’s prime engineering. Angkor is considered a unique example of a ‘hydraulic village’ due to its complex water network used to store and dispense water through the site. It is thought that the canal system could support one million inhabitants. 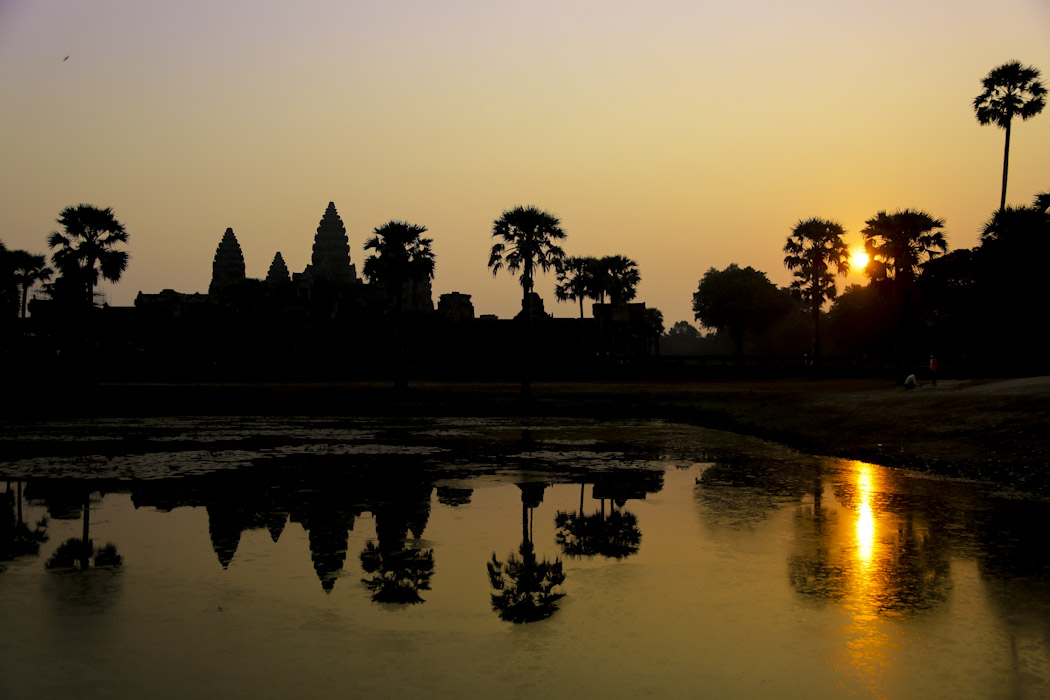 The different tickets and prices

If you plan to go to Cambodia because of the Angkor temples, then you should consider buying at least a three-day or a weeklong pass. Prices are as follow: 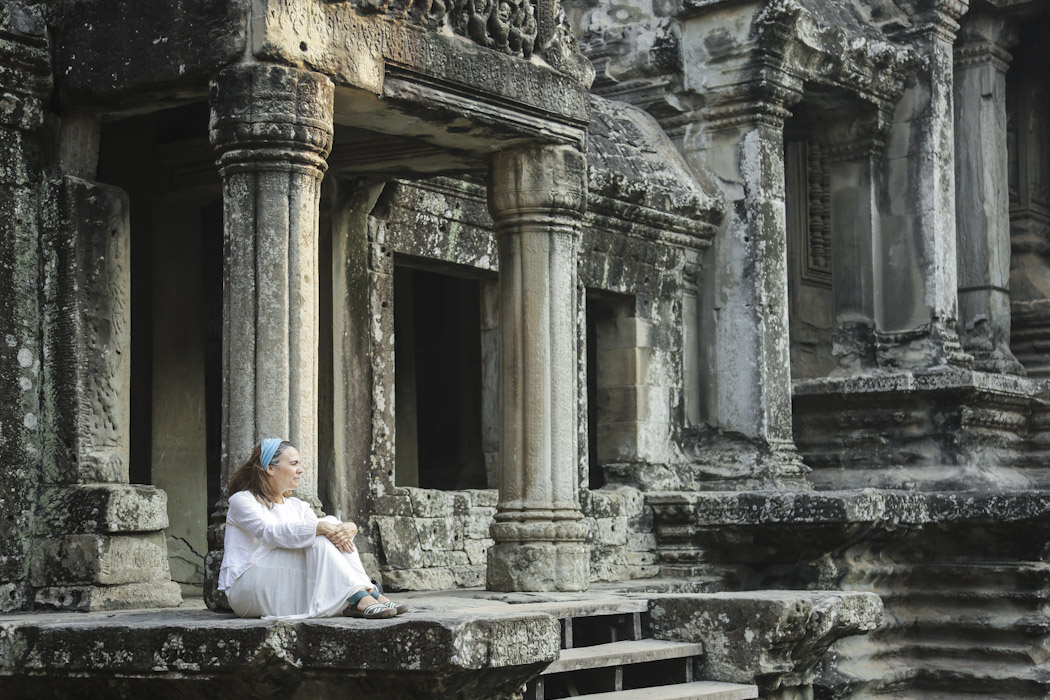 When to buy the tickets 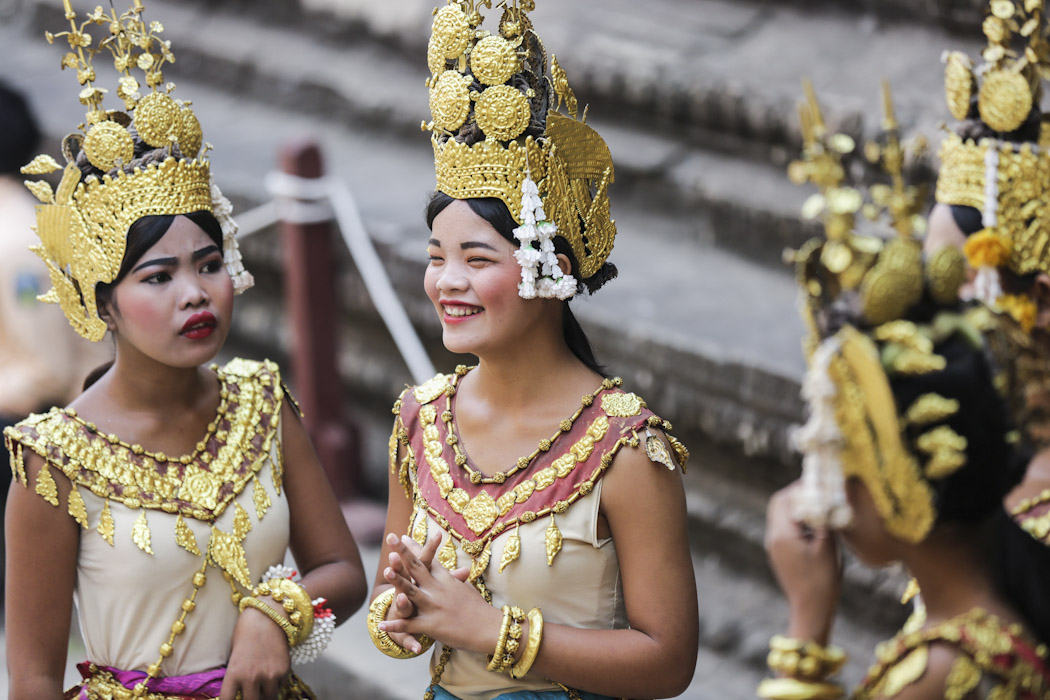 Go with your passport, and you need to buy the ticket personally, as tickets are personalised with your own photo (taken there). Don’t use someone else’s ticket, because at the first entrance all tickets are checked and photos compared to your face. 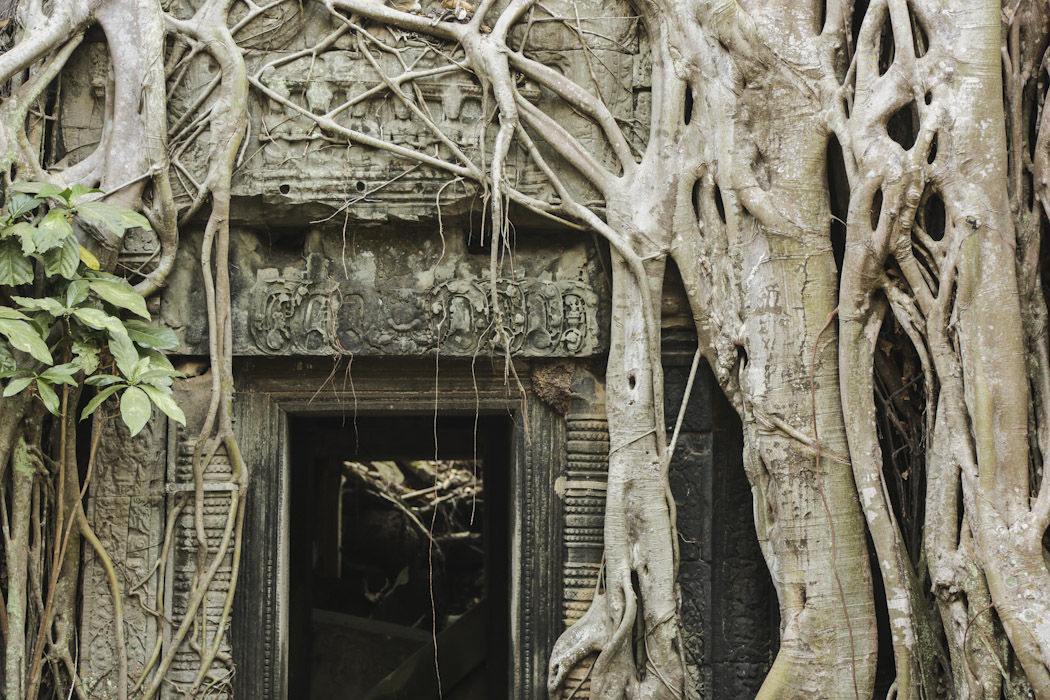 How to visit the temple complex 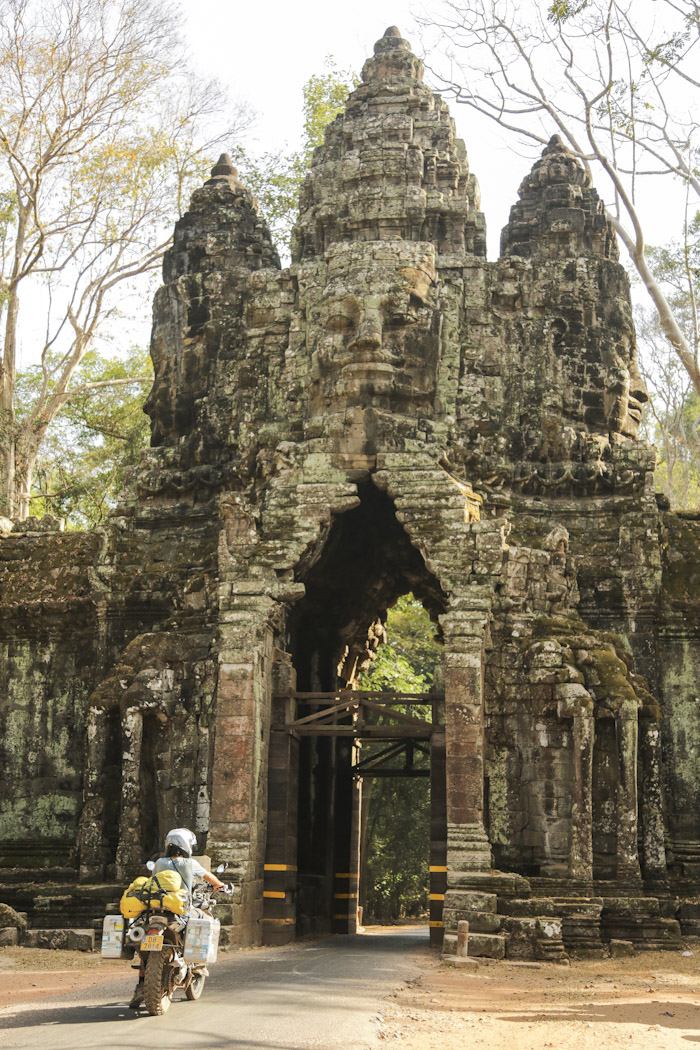 Because this was our second time in Angkor, we decided to have a one day ticket. If you have the time and the money, it is worth to have at least the 3-day pass, there is enough to see, believe us! As we had our own motorbike, we were free to drive at our own rhythm between temples and enjoy the site since it opened at 5 am until it closes at 5h30 pm. 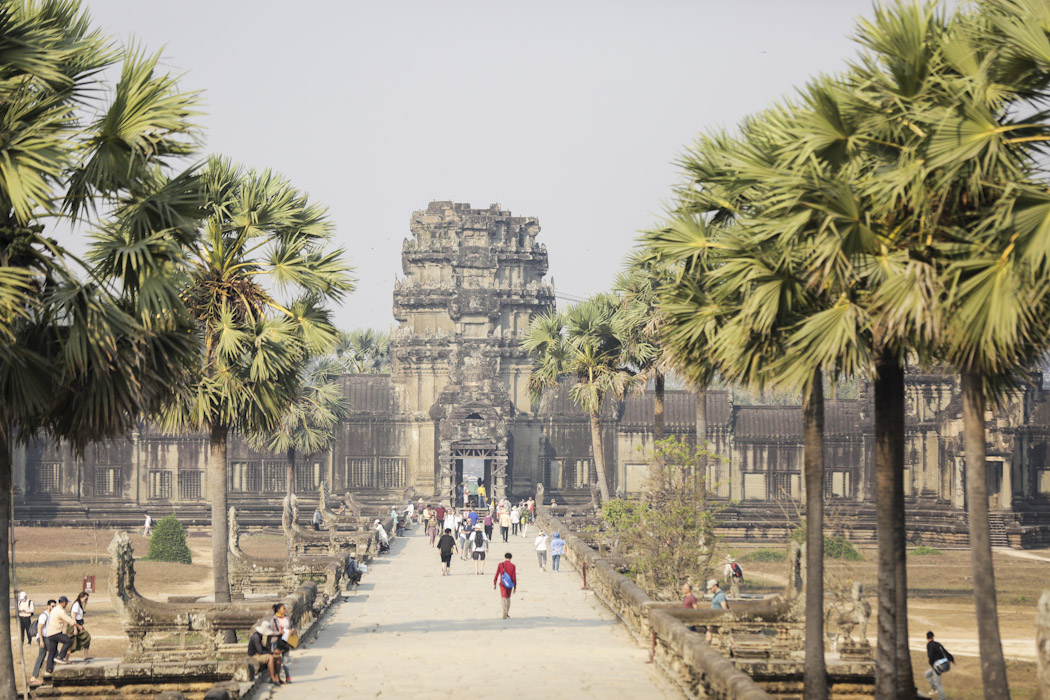 Angkor Wat is the largest religious site in the world. It was originally built as a Hindu temple (dedicated to the Hindu God Vishnu) during the Khmer empire. Over time, and with the change of kings, it became a Buddhist temple. 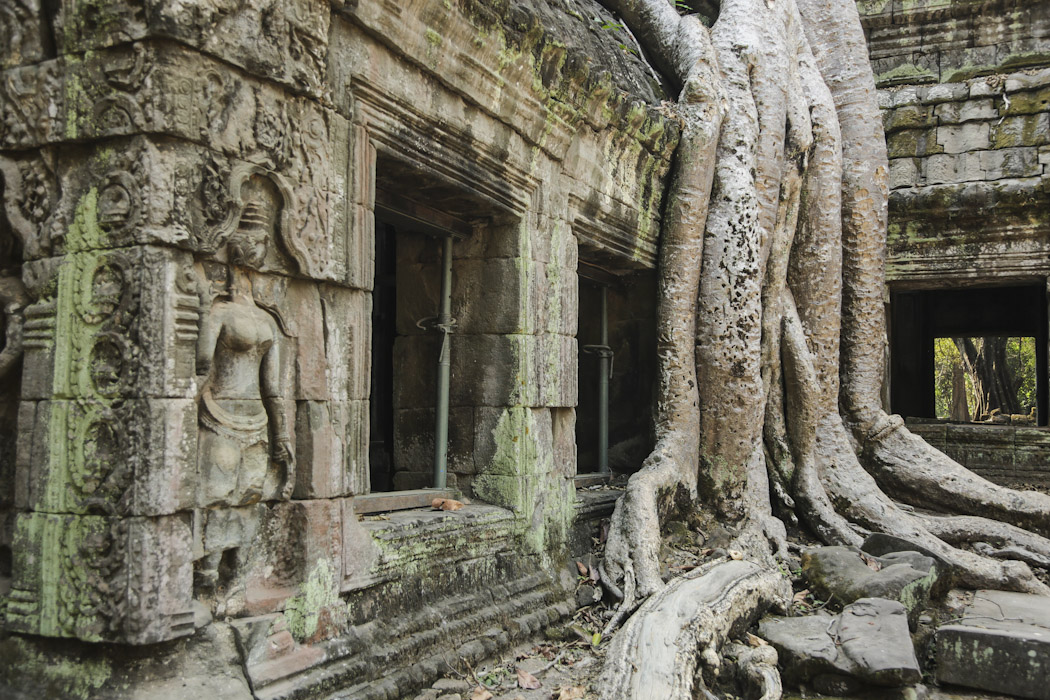 This temple was built in the 12th and 13th centuries during the period of the Khmer King Jayavarman. It was originally a Buddhist monastery and university. In the 15th century, Ta Prohm was abandoned and remained neglected for centuries. Today, contrary to most of the Angkor temples which have been reconstructed, Ta Prohm remains in the same condition in which it was found: absorbed by the jungle. 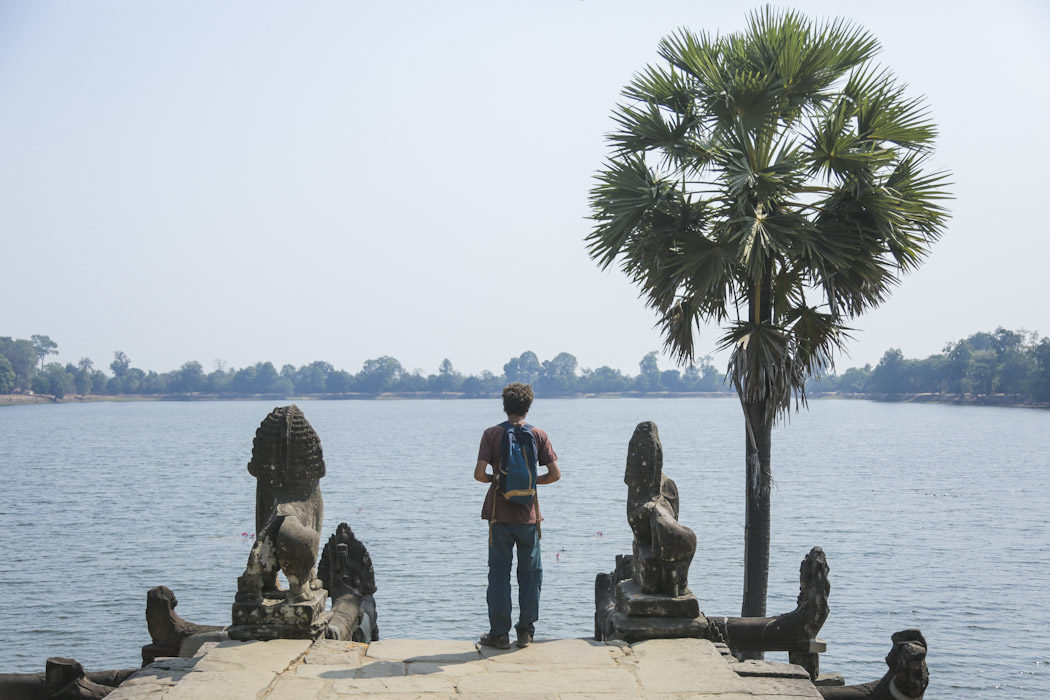 Srah Srang is one of the water reservoirs (baray) of Angkor. 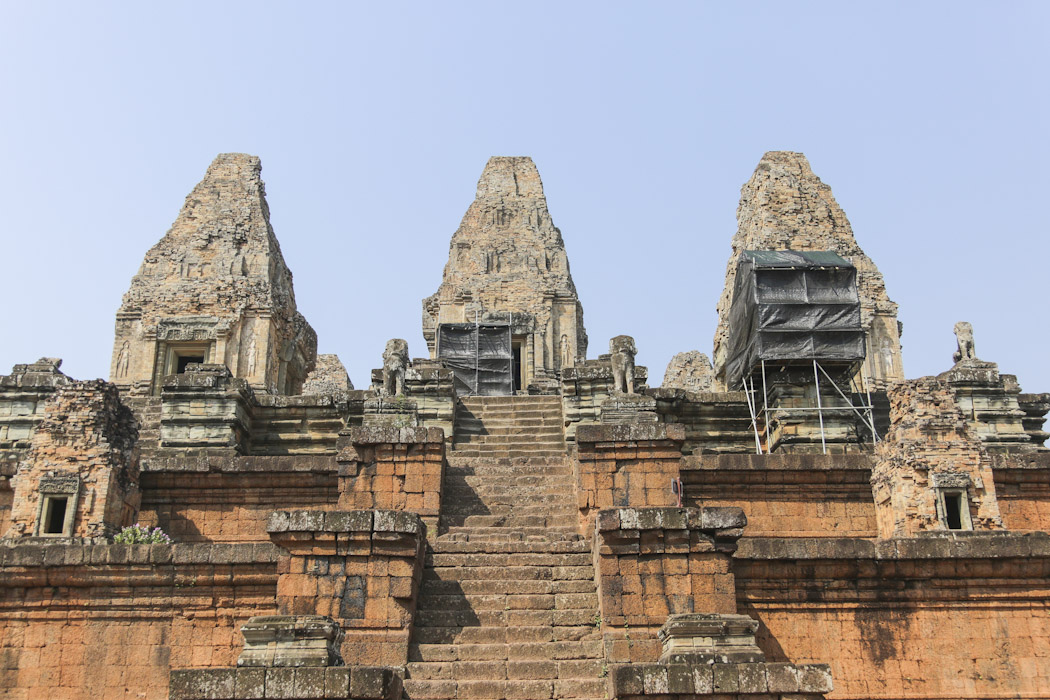 Built during the era of the Khmer King Rajendravarman, this is another Hindu temple that combines sandstone and brick, which gives it a reddish look. Some scholars believe this temple was used for funerals, especially for cremation ceremonies. 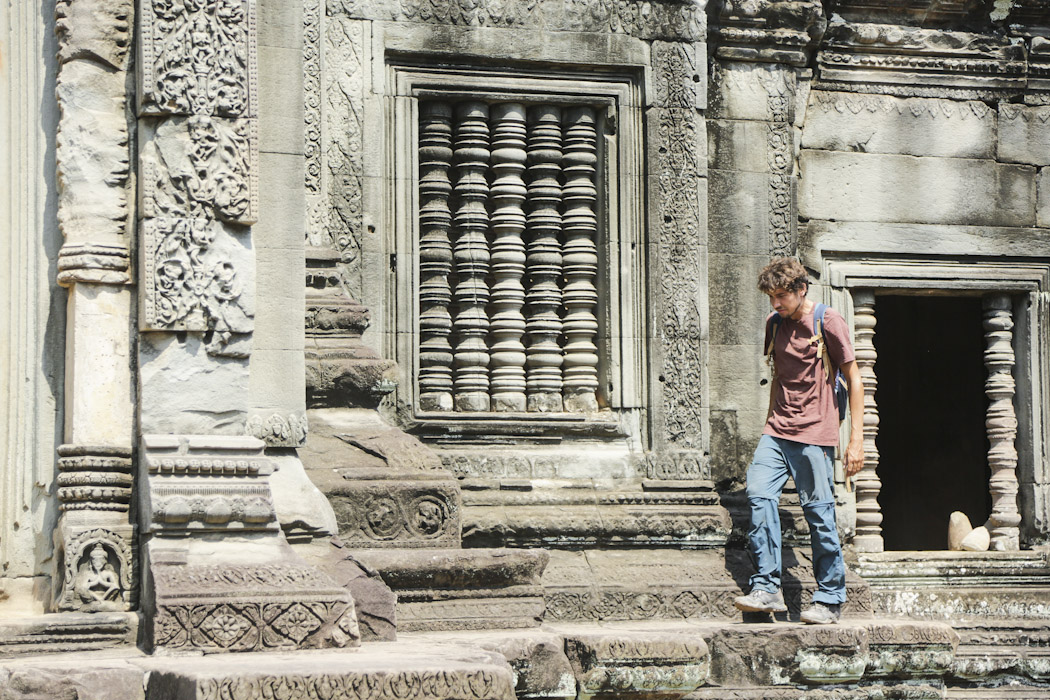 This is another Angkor Wat style Hindu temple built during the reign of Kings Suryavarman and Yasovarman and restored in the early 20th century. The design of a single ogival tower is recognizable as Angkor Wat style. 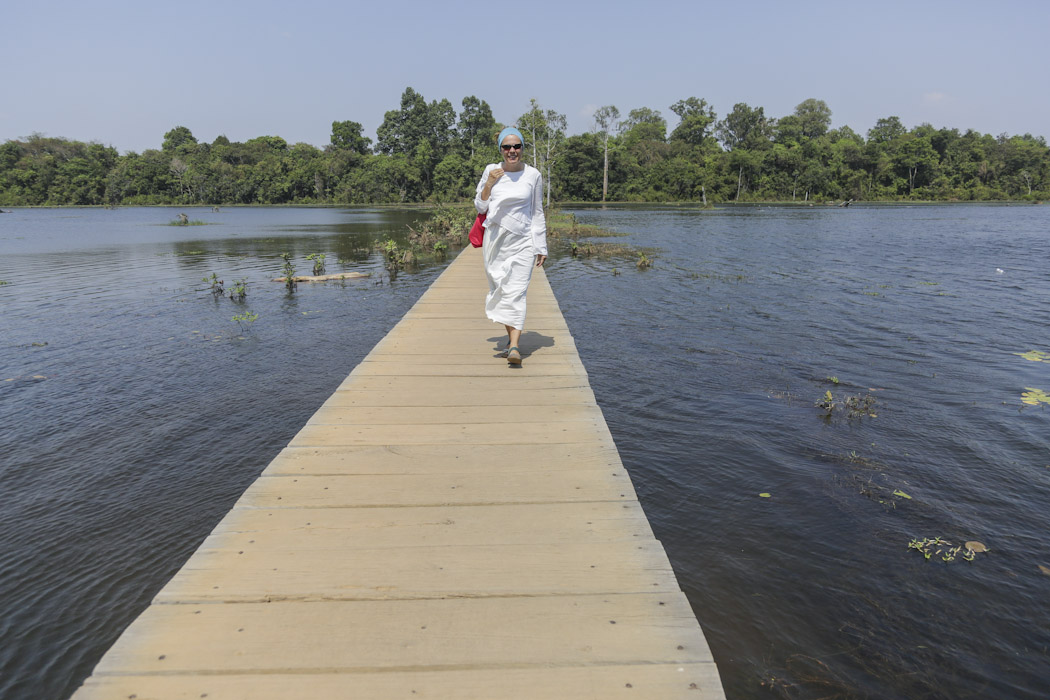 Neak Pean is an artificial island with a Buddhist temple on it. In order to create the island, the ground around was inundated and the forest was flooded. Centuries ago, the water drought and new trees grew there, but recently, more water was pumped in to give a new life to the island, and it is still possible to see today the top of the trees in the water. 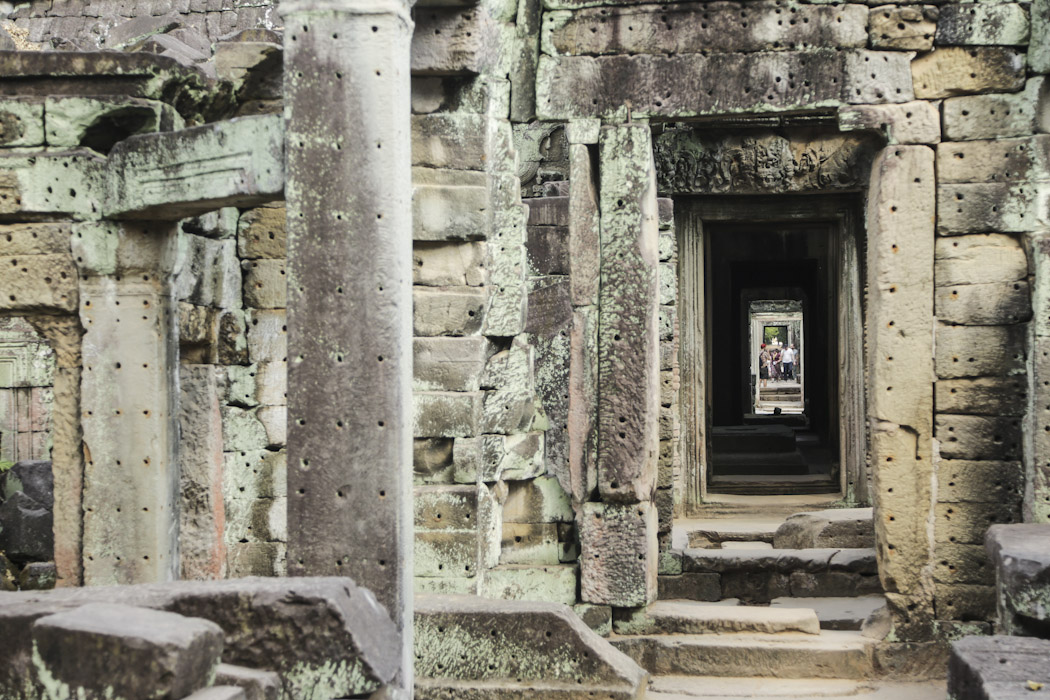 Preah Khan is another of our favourites and with many fewer visitors than Angkor Wat, therefore, and because it was left unrestored, its ambience was also more authentic. The temple was ordered by King Jayavarman for his father in the 12th century. Its architecture consists of a series of successive rectangular galleries, with the door passages always on the same sides, giving the impression of an infinitive mirror. 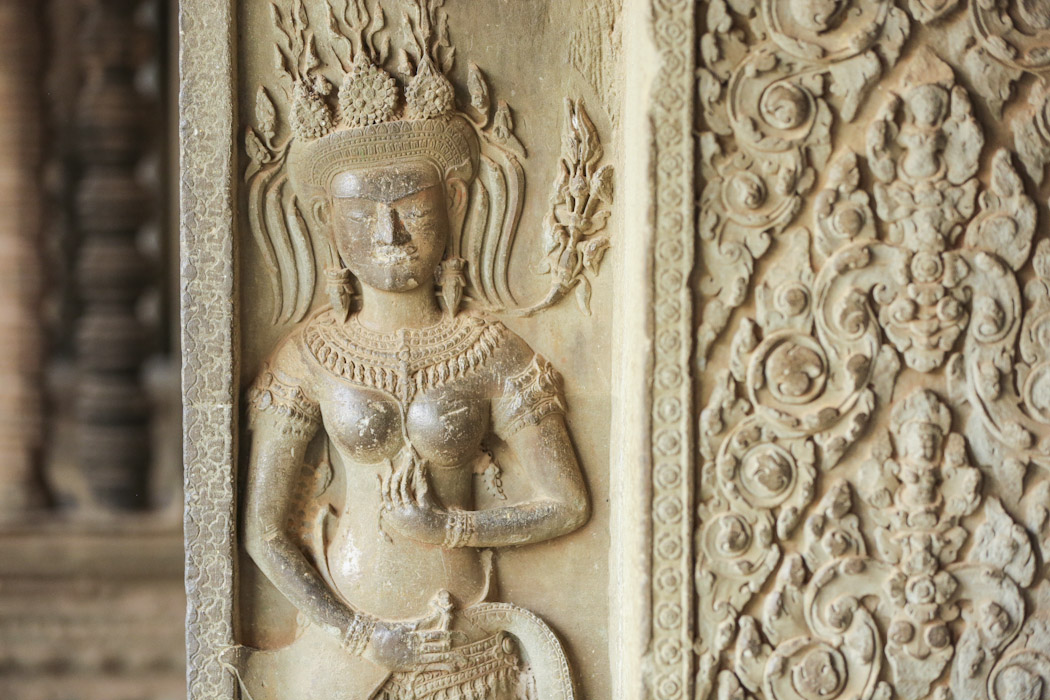 The name is self-explanatory, Angkor Thom is a ‘great city’ and it was the last capital of the Khmer empire.. The complex covers an area of 9 km², including many monuments, at the centre of which there is the king’s state temple, Bayon.

Terrace of the Leper King 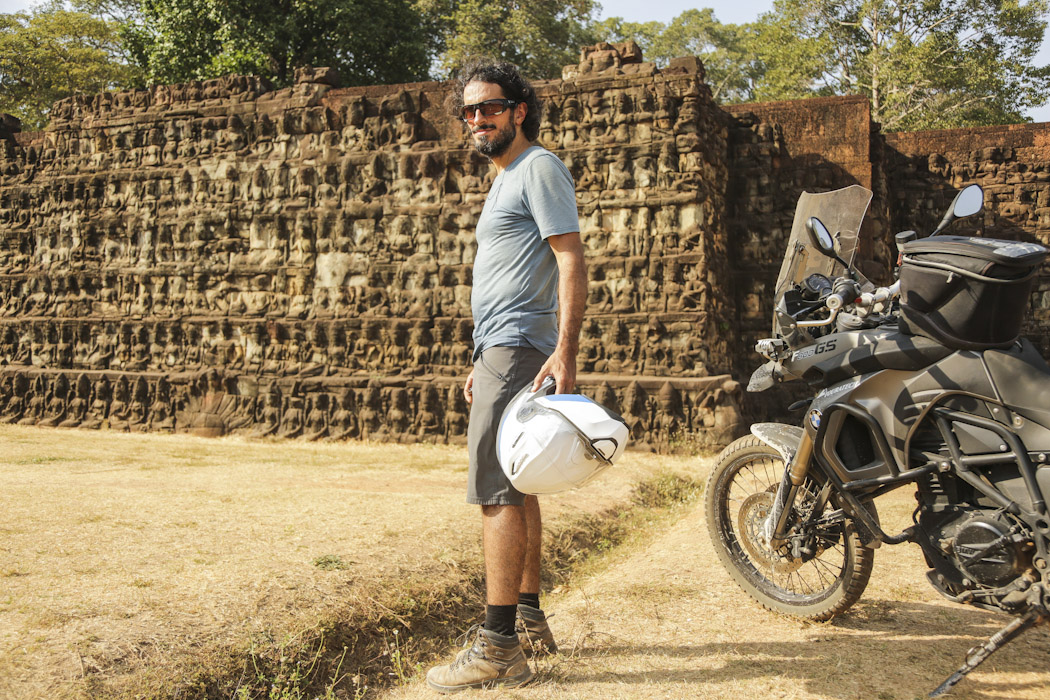 The terrace of the leper king is located in the Royal Square of Angkor Thom. Its name was given when a statue of the Hindu God of Death, Yama, was discovered in the site. The statue lacked colour and was in a state that looked as if the person had leprosy. It matched with the Cambodian legend according to which King Yasovarman had leprosy.  The terrace is constructed in a U-shape, with a corridor inside, which is thought to have been used as a cremation site for royals.

Terrace of the Elephants 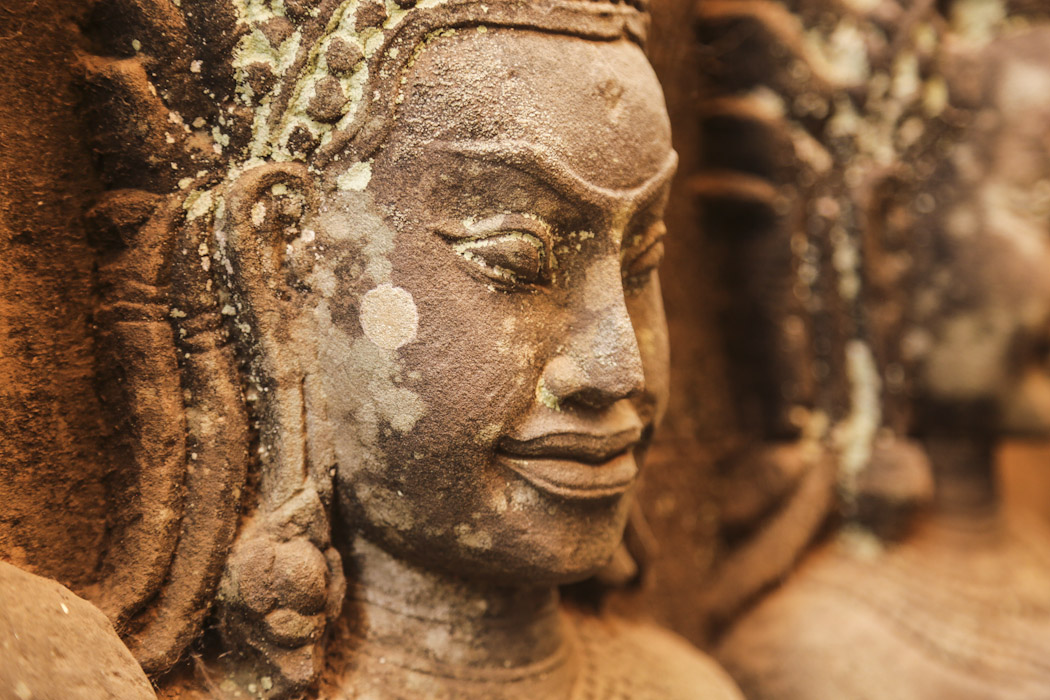 Located inside Angkor Thom, the Terrace of the Elephants was a platform for the king to inspect his army and as an audience hall. Unfortunately, most of the terrace was made of wood, therefore most of it is gone. The name of the terrace was given after the number of carvings of elephants. 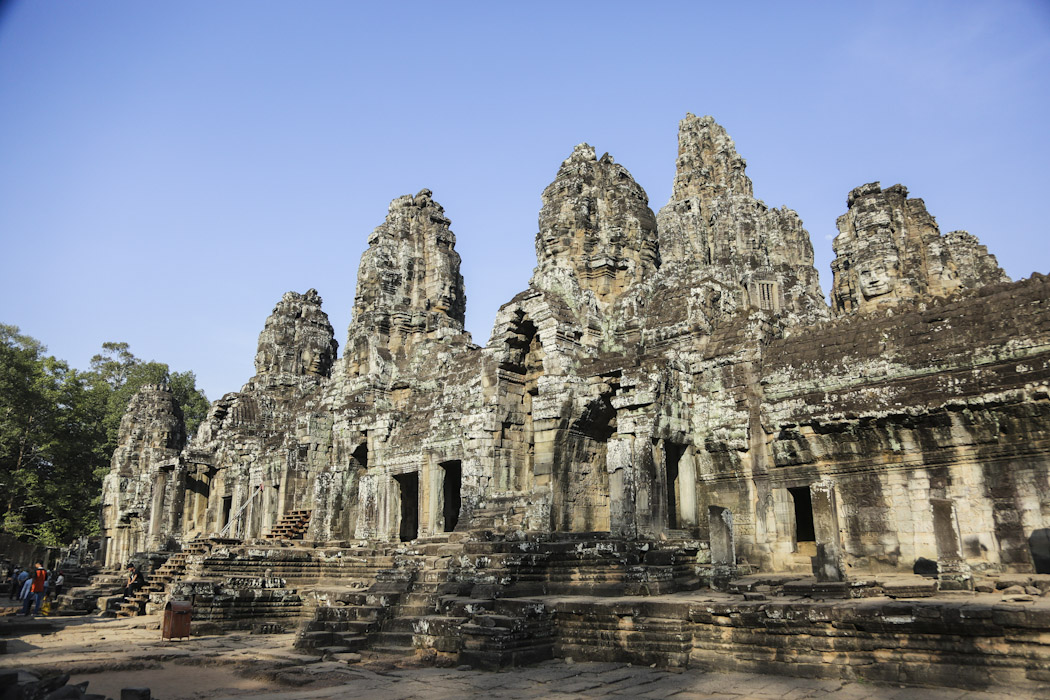 The Bayon is one of the most decorated temples of Angkor. It’s location, in the centre of the capital of Angkor, shows its importance. Built first as a Buddhist temple and later on modified by other kings, according to their faith. The Bayon is easily recognisable by its smiling faces carved on the upper terraces. It is a striking temple and probably the best expression of baroque in Khmer architecture. 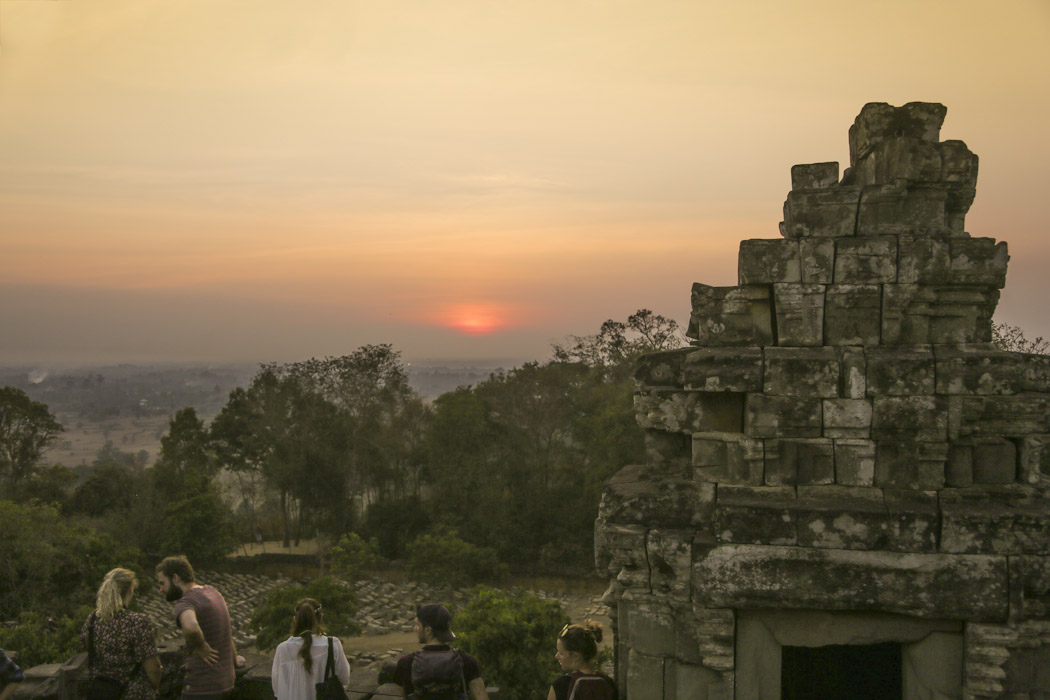 We chose to end our day at the Angkor complex at the Phnom Bakheng, a temple mountain. It offered great views over the jungle below. Unfortunately, all of the visitors seemed to have the same idea! In order to limit the visits at sunset, the guards control the entries and only allow the first three hundred to come in. We were among the ‘lucky’ ones, but honestly, you can definitely find other places for gorgeous sunsets in the site.