Below is some useful information about the Border Crossing from Beyneu (Kazakhstan) to Karakalpakistan (Uzbekistan), as well as a more detailed summary of the trip itself.

Since 2018 the handling of the visa has become straightforward for most of the European nationals. No need to pay an agency for an invitation letter anymore. Now, the procedure is simple and made at any embassy. You can check how to get an Uzbek visa here.

We did not look forward to the border crossing. We had read a lot about how complicated it is to enter Uzbekistan. We expected the Kazakh-Uzbek border to be the most complicated on our trip. Everywhere we had read of difficulties: corrupt officials, long lists of goods and currencies to be declared, forbidden medication that could bring us to jail, confiscated drones!!! We prepared a long list with all the money we brought – by now different souvenir bills from different countries – we left our medication behind (as we did not have any prescriptions) and we hid our drone as well as we could!!!!! We were not prepared to say goodbye to our drone, Sparky!!

We were rather surprised by the friendly smiles at the border. We opened the side boxes, inviting the officials to check those bags but they did not seem much interested. They started by asking whether we carried any guns and drugs. We must have looked honestly surprised with the questions because they kept speaking amongst themselves not checking our open boxes.

Then they looked at our yellow speed bag!!! No, sirs, not that bag, please!! “What are you carrying here?” I froze while Jorge played poker: “Our tent. Would you like to check it?” Why does he always play all-in when bluffing?? “You sure have no drugs?”. Now it was my turn to look offended by the question “Do I look like a person who uses drugs?” That did the trick, unwilling to challenge an offended woman, they welcomed us to Uzbekistan with Sparky!!! Yay!

Immediately after the border, there were many people offering to exchange money (black market). We decided against it and thought we would find a bank to make an official exchange in the small town of Karakalpakstan. There is a bank, yes, but no exchange nor ATM. We were then without Soms (except for a few souvenir notes, which a fellow traveller had given us) and without much petrol.

Challenges on the road: Karakalpakistan to Nukus (400 kilometres) 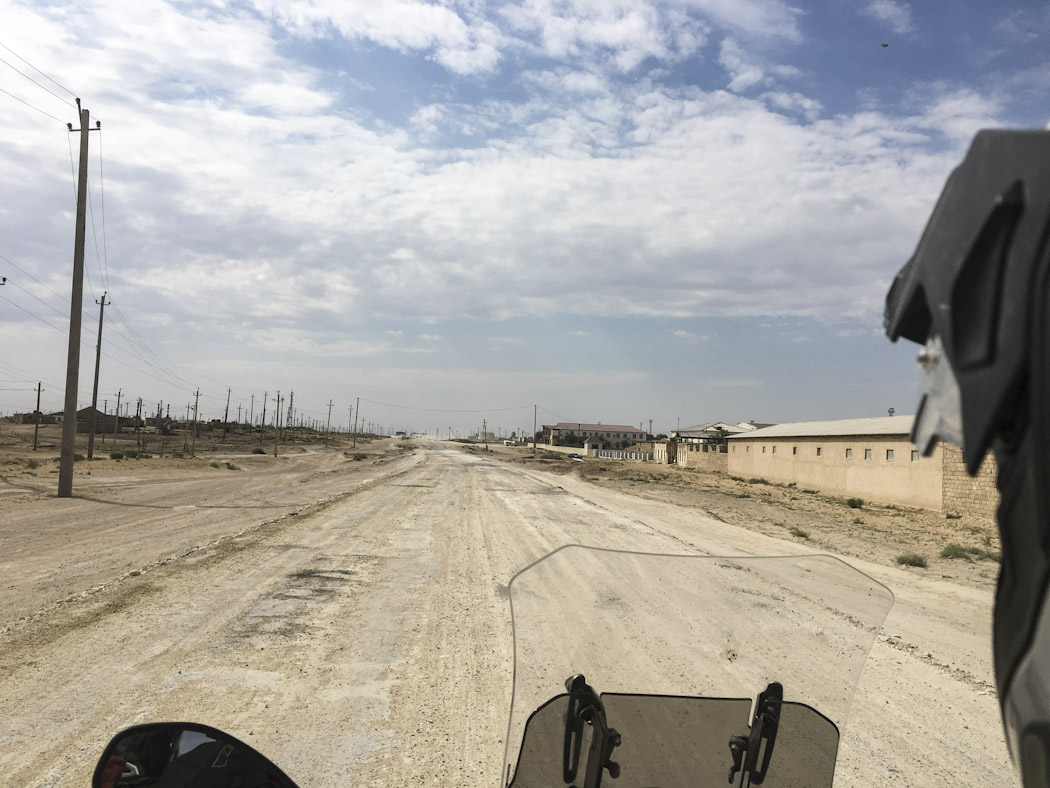 The first province we needed to face while entering Uzbekistan from Kazakhstan was the desert area of Karakalpakstan. Our major concerns regarded the road (how much of it is left to be called tarmac), money (the biggest village where we would find money exchangers or banks would be Nukus), water and petrol. It is known that truck drivers avoid this desert and prefer to make the much longer detour through northern Kazakhstan to avoid these problems. That should have given us a hint! Because, if there are no trucks, there is no need for petrol stations! Most of the cars in Uzbekistan use gas, therefore the few stations on this road were selling gas, not petrol!

The road was sometimes tarred, other times filled with potholes and occasionally sand (mainly because of a parallel road being built). It was also long and there were no real localities until Nukus. You will only find choyhonas (tea houses), where we could find water and food. We also read that occasionally they would sell petrol on plastic bottles. We trusted in these places to find petrol, since we had filled the tank in Kazakhstan and we can ride around 350 to 400 kilometres with one fill! Not enough to reach Nukus, then! 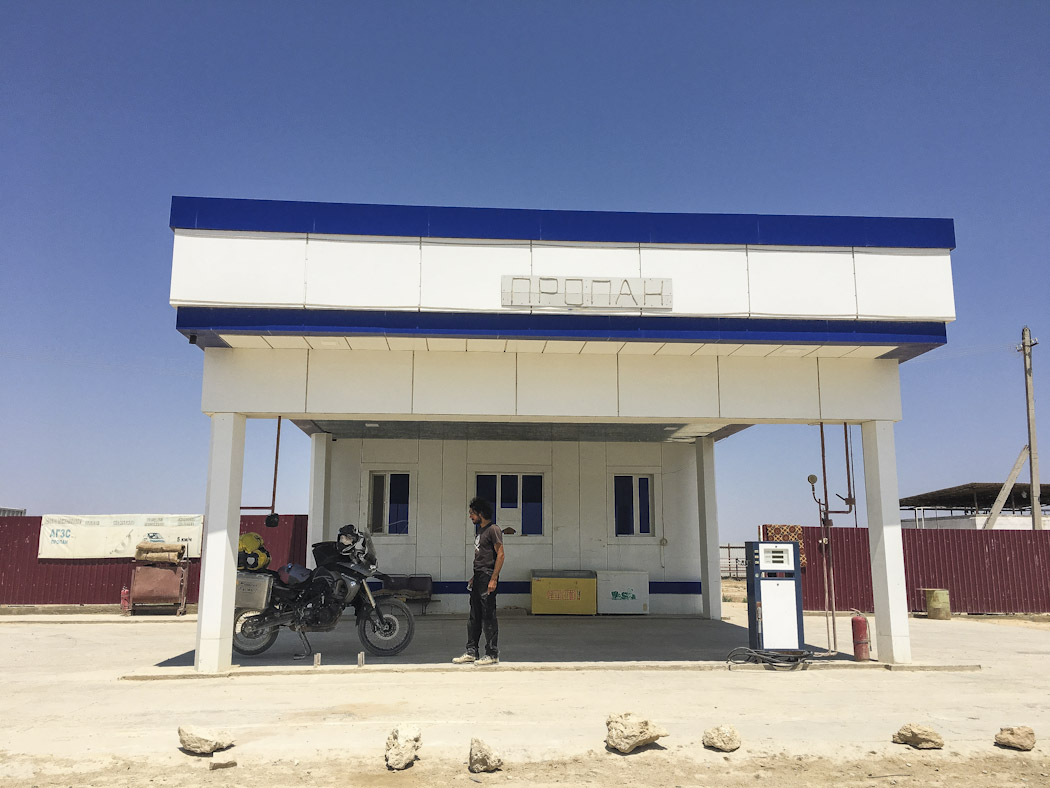 But even if they had petrol, we had to rely on them accepting dollars or Euros, as we had no Soms. We stopped in one such choyhona, where a group of three Russian motorbikers were refueling their tanks from canisters. We decided to stop to do the same. However, when we stopped we realised this was their own petrol, and not sold at this tea house. When they realised we had no petrol, they insisted on giving us two litres, enough to bring us until Nukus.

We stopped ever so often when a shade was at sight. Temperatures were another problem and we needed to hydrate with water very often. It was therefore already getting late when we arrived at Kungirot, still 100 kilometres before Nukus. There was a huge restaurant and hotel facilities and we hoped we would be able to pay with the credit card here. No such thing, but the problem was solved, when two Polish motorbikers offered for us to stay the night and paid for our stay. That night would be about chatting and drinking Georgian brandy. Two bottles for four persons, and they wouldn’t accept a no!

This would be our first night in Uzbekistan and we were made aware that in each hotel that we stayed we should ask for a registration slip, so that if we had any police control we could show where we had stayed. If not before, we would need to hand these at the border, when leaving. Every time we entered a new district (or region) there were police controls, and we knew that in the past they used to be a pain to foreigners, with police officials trying to extort as much money as possible. This has completely changed and we are now asked to move on without the need to show any documents or even stop.

If you found this interesting, you may also like the following: