The founding father of Mongolia had a reputation for being bloodthirsty. This says a lot about his brutality as a warrior and emperor, but what does it really say about his, and Mongolians’, food habits?

We were up for a large family dinner, a kind of celebration, where we would be introduced to many traditional dishes. The hosts and the other guests showed up wearing their colourful silk deels, another sign that we were there to celebrate. Mongolians’ penchant for bright colours is shown, not only in the traditional attire they wear but also in the decoration of the gers’ walls. The felt that covered the interior of the ger formed a dazzling background of reds, greens and blues. When we finally approached the table, the monochromatic tones of the fried flour, mutton and dairy products almost came as a soothing contrast. 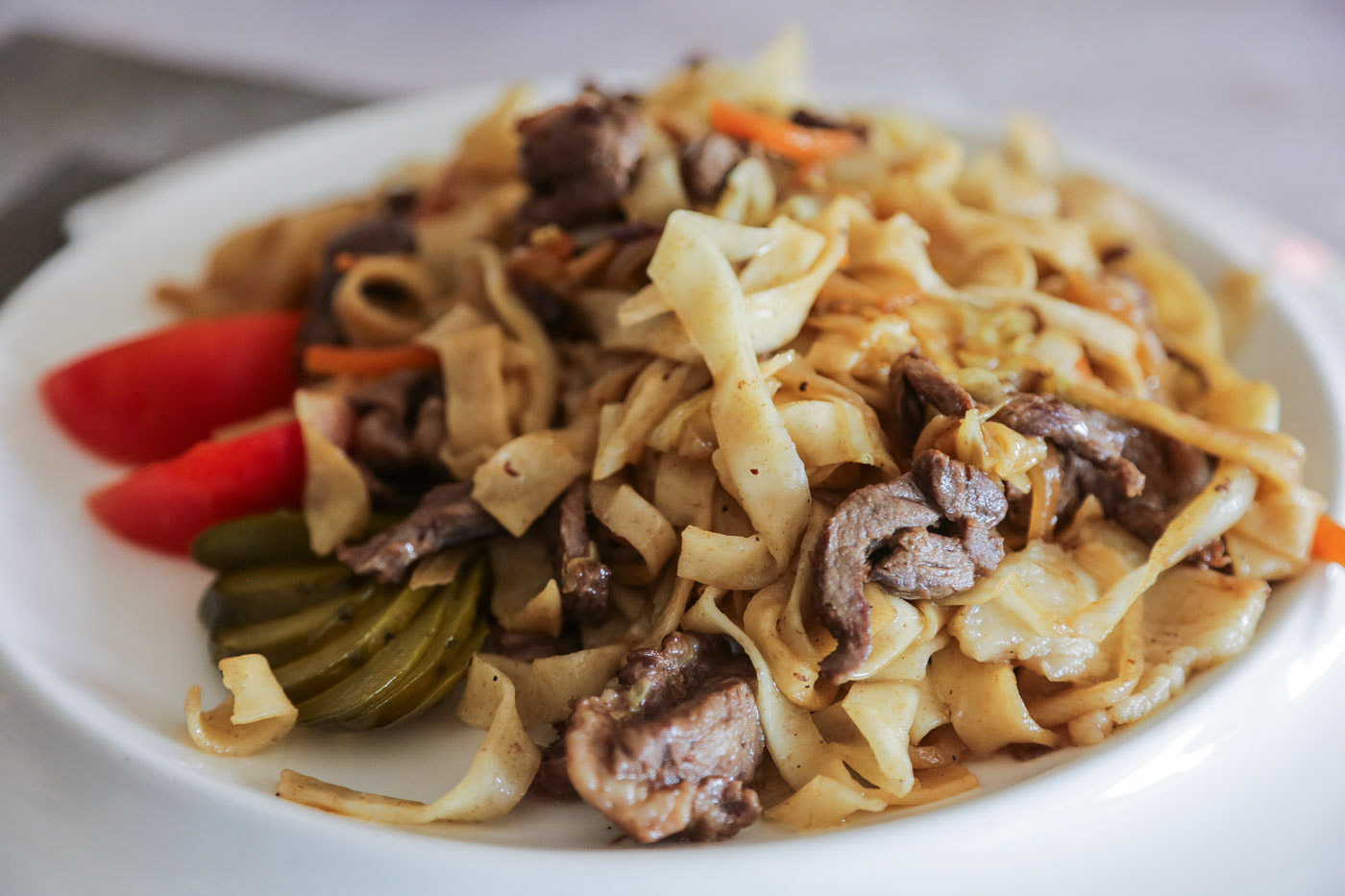 The matriarch fed the stove with dry dung, while her husband welcomed his guests with bowls of airag, the traditional national beverage, made of mare’s milk. It is the drink that Genghis Khan was likely to have drunk to celebrate a victory. It looked like a watery yogurt, but fermented. Therefore it was slightly sparkling, alcoholic and sour – an acquired taste!

The intense smell of boiling mutton hit us in a powerful way. It was almost nauseating to our unaccustomed noses. A glimpse into the large cauldron over the stove did nothing to soothe our stomachs, particularly once we discerned the weirdest parts of the animal in the broth. In order to withstand the ice-cold winters, meat and animal fat are an essential part of the Mongolian diet. All the parts of the animal are consumed, including intestines, head and blood. Having pieces of fat floating in one’s stew is not only a sign of pride for the hosts but it is also a question of status – the fattier the broth, the richer the family – it means they have healthy livestock.

The table was plentiful. Our host pointed out the different platters, inviting us to start. For this serving, we helped ourselves from the common trays, cutting chunks of meat with a knife and using the tip of the blade as a fork. Easy and practical. The variety of dishes was almost an optical illusion, in the sense that the dishes looked and tasted different, but all used the same staple ingredients. As they have limited available ingredients, Mongolians use their creativity to cook the same elements in different recipes. As an example, on the table there was Buuz and Khuushuur. Whichever you pick, you will be eating mutton and flour dough. One dish is made up of steamed dumplings filled with mutton and the other is fried pastry filled with minced mutton.

Mongolians cook with what they have available and, unfortunately, vegetables and spices are not just around the corner. Vegetables are rare; not only because nomads traditionally move from place to place a few times a year but also because of Mongolia’s continental climate and barren land. We heard about vegetarians surviving in Mongolia, and we also heard about smugglers sneaking cabbages and watermelons in from Russia. However, we were unable to verify the truth of this, and even today we don’t know if these were just stories to entertain foreigners. Mongolians have a good sense of humour.

Whether we ate at someone’s ger or in a guanz (the traditional restaurants) by the road, the table always offered plenty of aaruul (dried curd) and boortsog (fried dough). These are the Mongolian’s snacks; eaten as starters, snacks or dessert. They are filling and ended up being the base of many of our breakfasts, although the boortsog tended to be too dry for our taste.

As usual, we checked out a few supermarkets and grocery shops, something we like doing in each country. It is often an almost anthropological experience. In doing so we get a grasp of what people eat at home. In Mongolia, nomads are self-supporting; they mainly eat the meat and dairy products they produce themselves. This partly explained why we didn’t find any appealing supermarkets, outside Ulaanbaatar. Most of the time, fresh products were very scarce or non-existent, and the shelves were filled with imported candies, cookies, chips and an insane selection of instant noodles.

For this reason, we bought very little in grocery shops and preferred to eat in guanzs, where, although there was a prominence of meat, we knew this meat couldn’t be more organic. We can’t say that we eventually got used to the pungent taste of mutton, but we came to prefer it, especially when the only other options were less inviting dishes, such as offal or raw fat. We also avoided Mongolia’s national dish, boodog, a dish in which the animal itself is its cooking vessel, and Genghis Khan’s alleged favourite dish, goat’s head!

We will not necessarily return to Mongolia for its gastronomy. Traditional Mongolian meals are more likely to attract photographers than gourmets! Foodies with a tooth for delicacies, greenies or spice-lovers may be hard to please. If anything, Mongolian cuisine has shown us that adaptation is the key to survival in such a beautiful but unforgiving land. This leads to the inevitable questions, is it viable, sustainable or even morally correct for us to import so much food from the other side of the globe in the name of a healthy diet? Shouldn’t we just adapt and eat what we produce?