After having read that Georgian food abuses in the use of cheese and meat, we had never expected it to become one of the best cuisines we have tried so far! It will be difficult to want to try other dishes after having well-prepared Khinkali (vegetarian or not, there are several versions), or the delicious Khachapuri, but you should resist the temptation and try other things. Everything is pretty much delicious as the following dishes suggest… Enjoy! 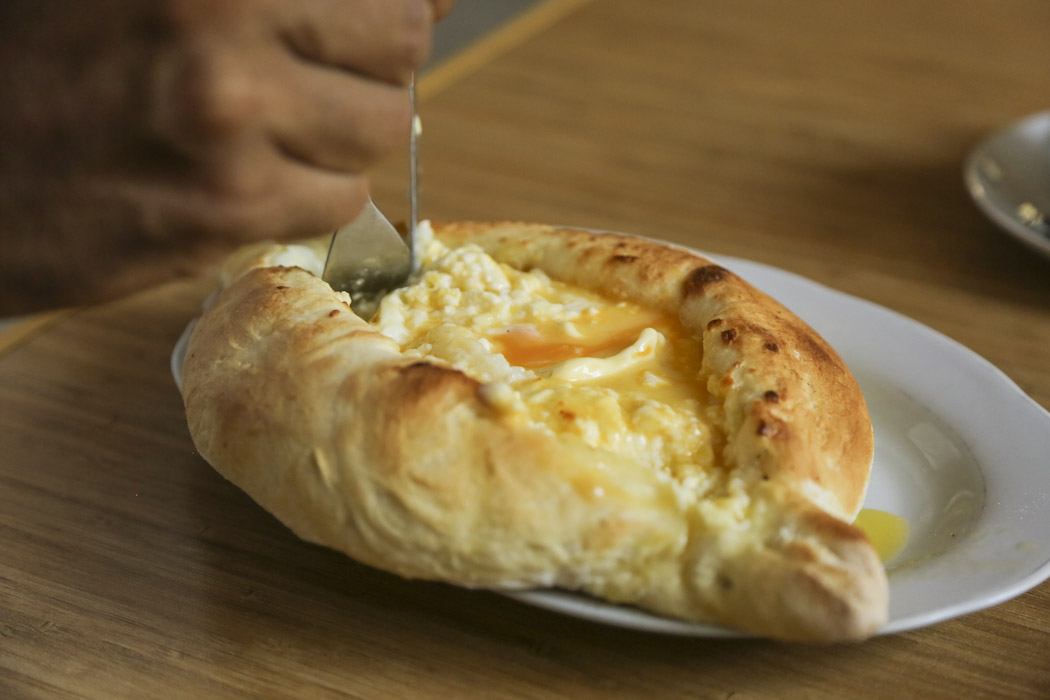 Khachapuri is one of the national dishes in Georgia. Each region prides to have its own variation of this flatbread with cheese. The most common ones, and arguably the tastiest ones, are the Adjarian and the Imeretian khachapuris. The Adjarian khachapuri comes to the table with a piece of butter, cheese and an egg on top. We need to stir the whole and then break off chunks of bread to soak on the resulting creamy centre. 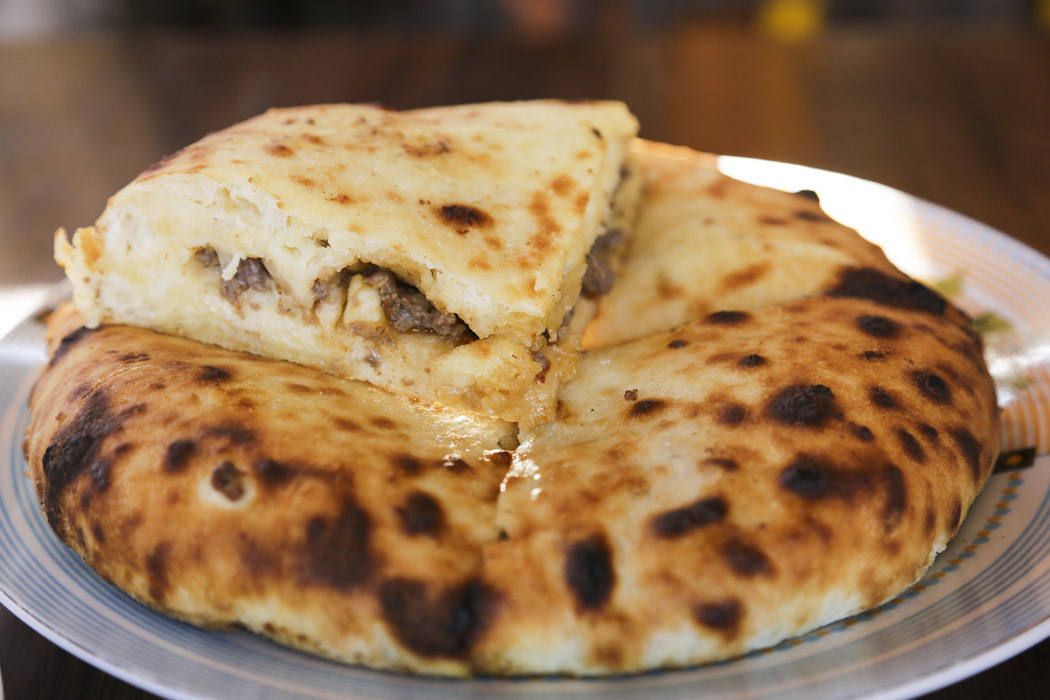 Kubdari is another filled bread dish but this one is traditional for the Svaneti region. It is filled with small chunks of meat, onions and many spices. 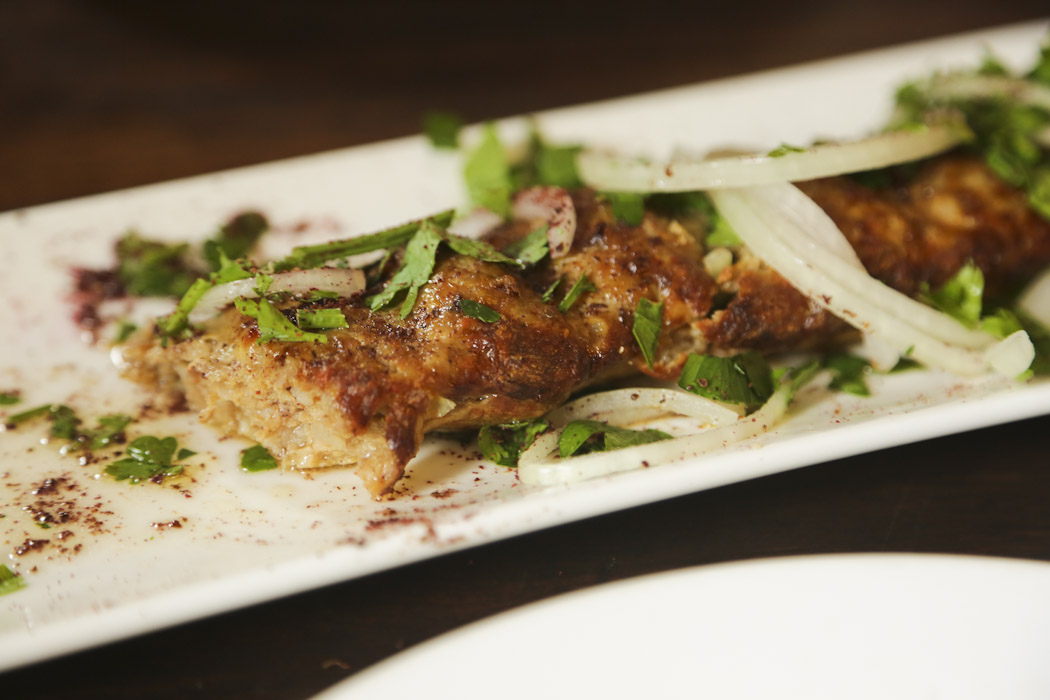 The tastiest grilled meat is the Georgian kebab. Use a mix of minced beef and pork meat and add chopped onions and garlic to the meat. It is better to use the seeds of spices (like cumin and coriander) and roast them in a pan to free their fragrances. They are then barbecued on a spit and are present on every Georgian table! 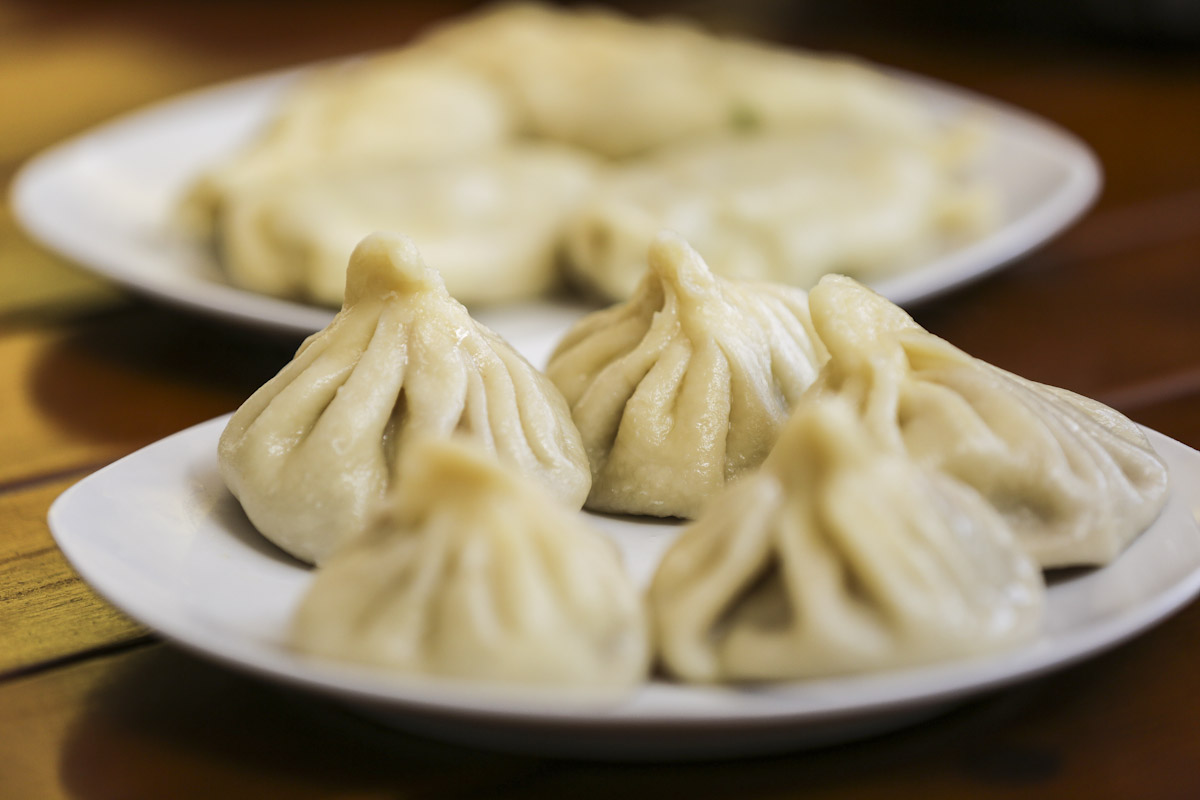 Khinkalis are traditional Georgian dumplings filled with spiced meat and aromatic herbs although some say they are originally Mongol. They also exist in vegetarian versions filled with mushrooms, potatoes or cheese. They are prepared pretty much the same way everywhere in Georgia, although, if you ask around, you will get the information that the best version is served in the village of Pasanauri, which, by the way, we confirm. 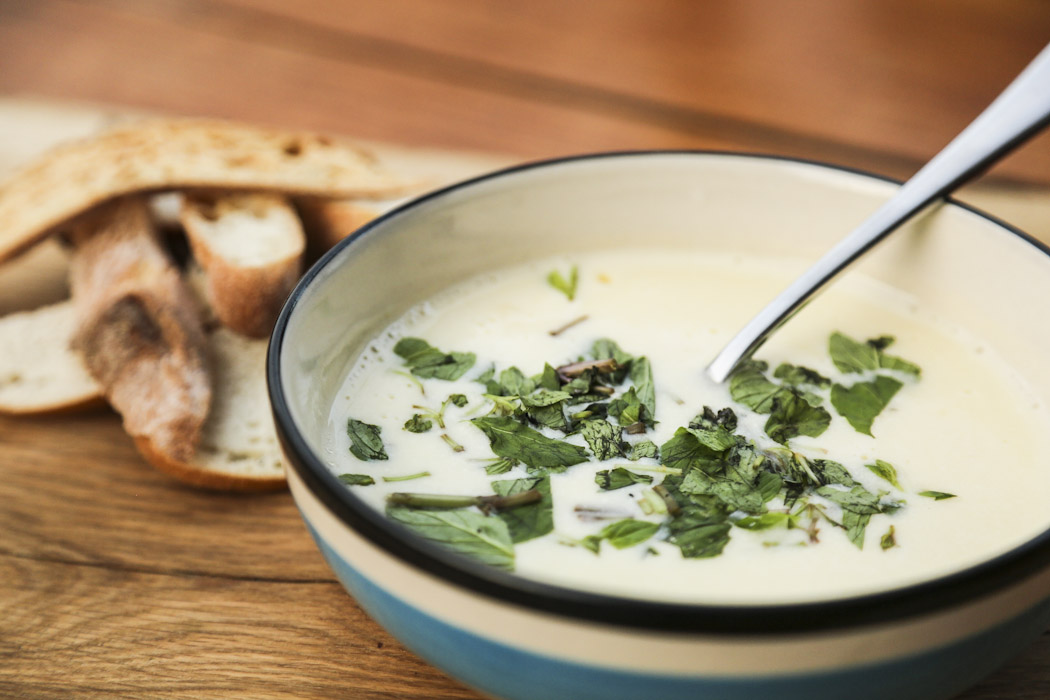 One of the most delicious chicken broths had to be found in Georgia. This one is made with eggs and lemon and the result is a light soup, with only a few pieces of meat and a lot of coriander! The taste of the lemon with the coriander is what makes this soup so special. It is also considered as hang-over treatment… 🙂 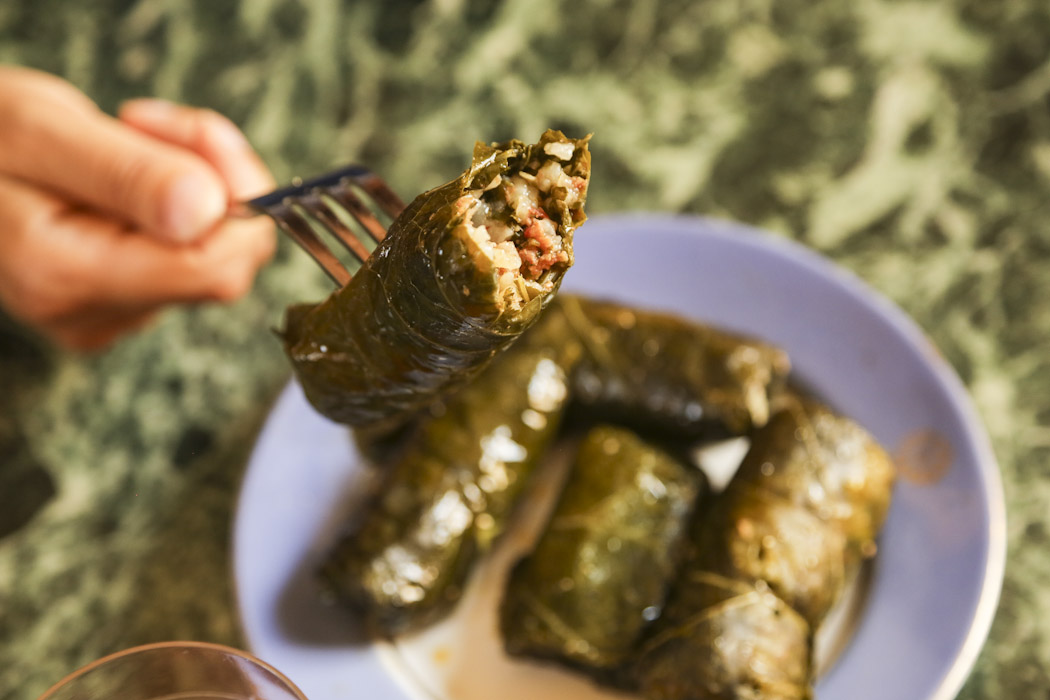 The Georgian version of vine leaf wraps is not flat at all! The leaves are filled with a mix of meat and vegetables and very little if any, rice. After the stuffing is prepared and the leaves rolled with the preparation, some fry them in a little bit of oil for extra taste… 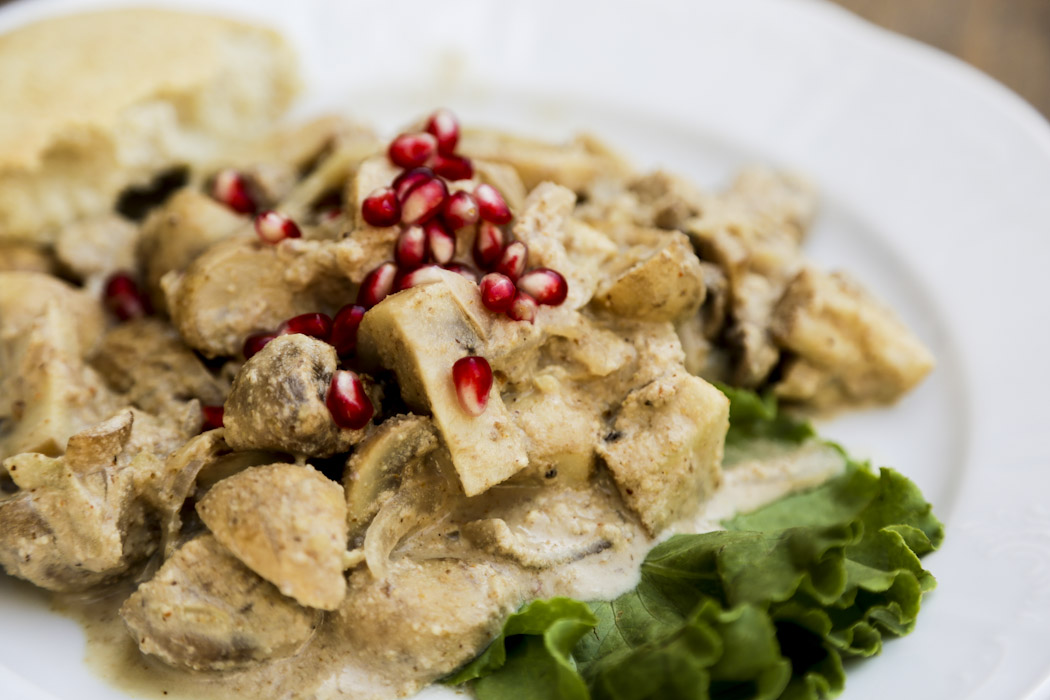 There are several dishes having the mushrooms as the main ingredient. Stuffed, grilled, roasted. We enjoyed all the varieties of mushrooms. Our very favourite is the version with walnut sauce. Georgians are experts in the use of walnut, they even use it to dress salads. On top, very often dishes are decorated with pomegranates, which were originally taken from Persia cuisine. 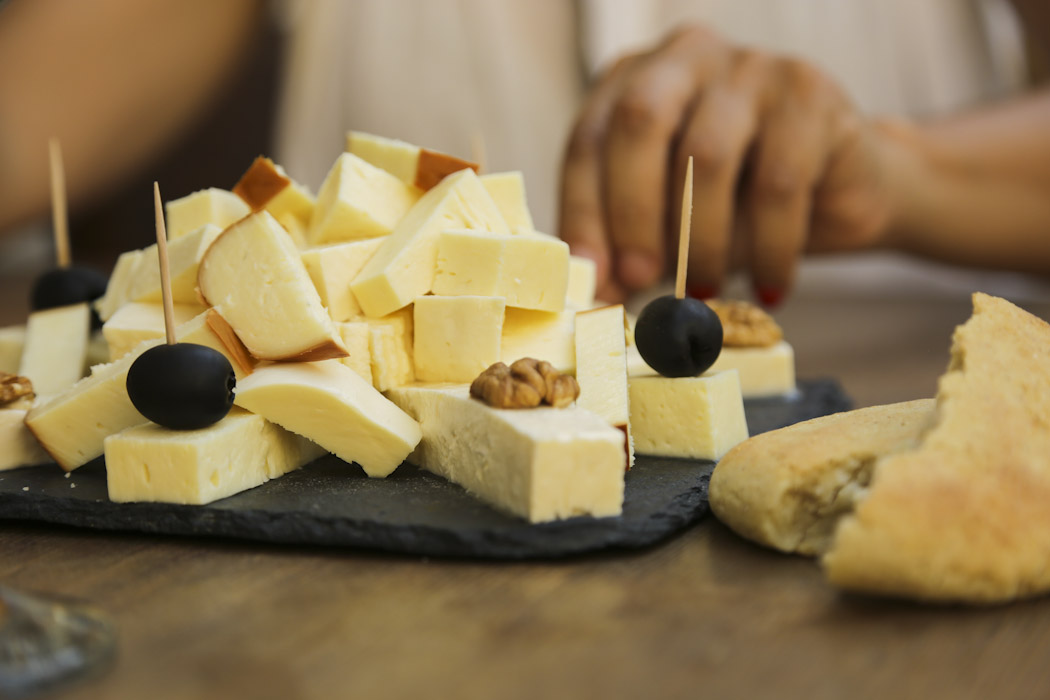 One of the pleasures of having a snack is that any restaurant or pub will be delighted to serve you whatever you wish any time of the day. Even though you will eat plenty of cheese on your meals, you may want to once have a plate of Georgian cheeses with a glass of red Saperavi. The most probable is that you are served a selection of Tenili, Sulguni, Immeretian and a smoked version of Sulguni. 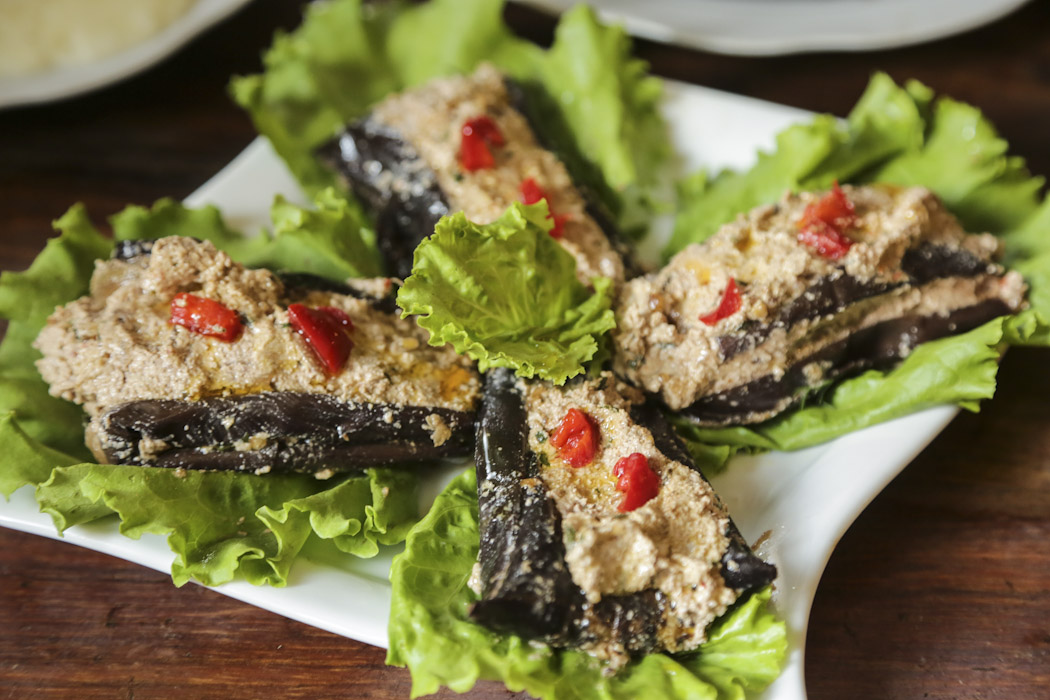 This is another kind of filled dish, in which the grilled slices of eggplant are rolled and filled with walnut paste. As the eggplant has some natural bitterness, it is not to everyone’s taste. We kept having it as our portion of vegetables and found a few interesting varieties… 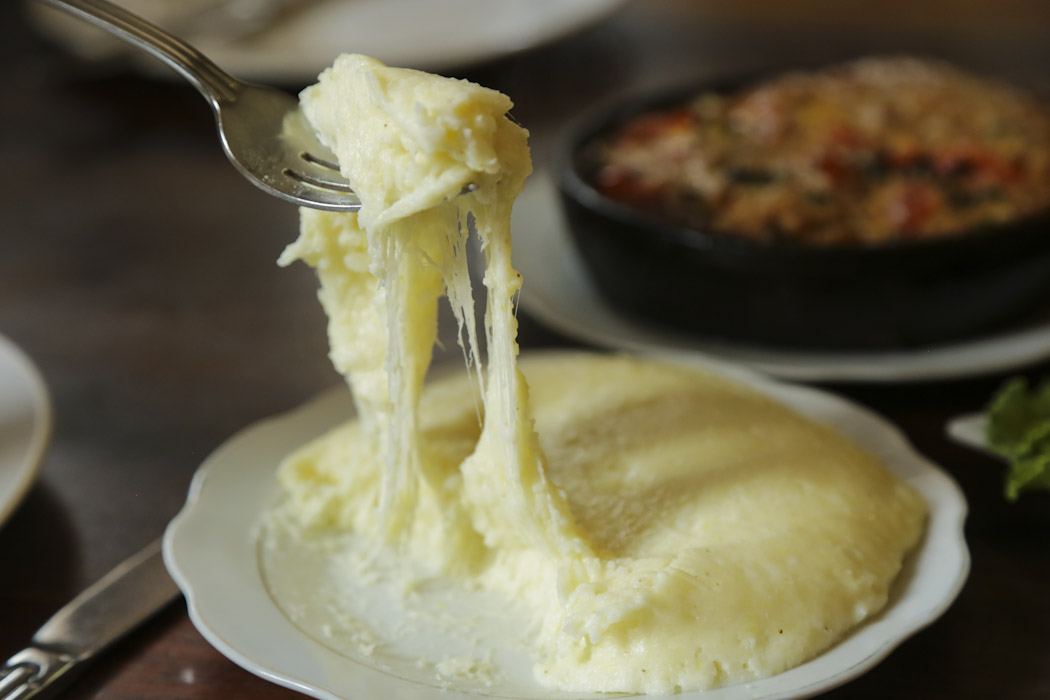 There is no way to describe what Elarji is without using the word ‘bomb’. It is a bomb of calories and it is heavy. However, it does taste better than what it actually looks like. This is another traditional dish made of cornmeal and cheese stirred for a long time until it gets this chewy consistency. 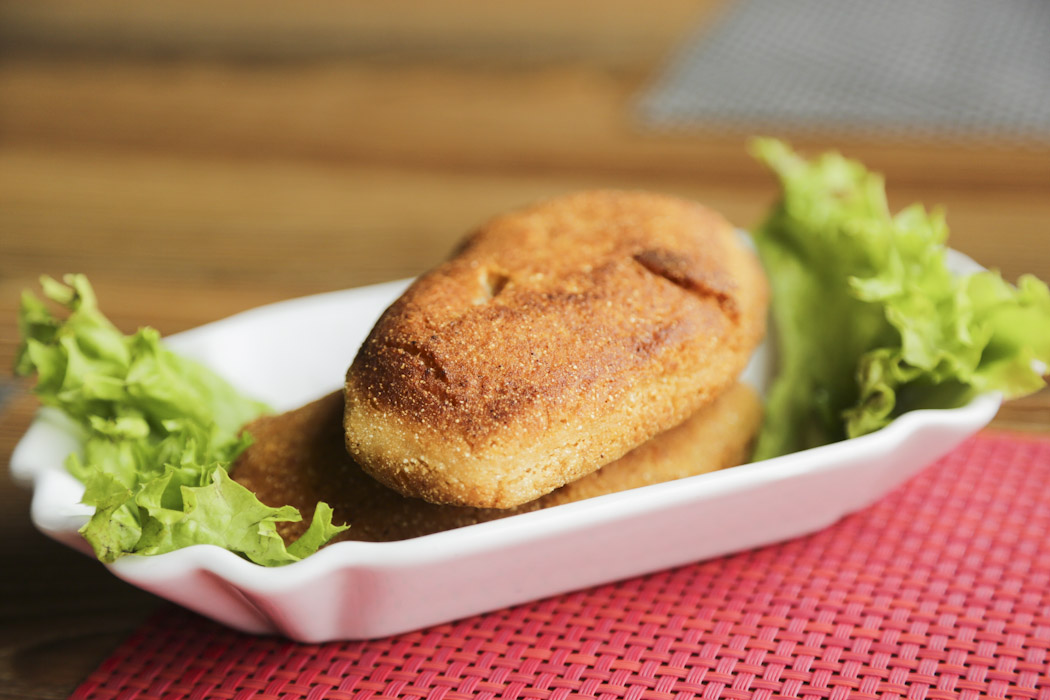 Like any other of Georgian loaves of bread, mchadi is very tasty and it has got the particularity of being made of corn. Each region has its own version of cornbread and one of the most popular is the one where the bread gets crispy after being fried. 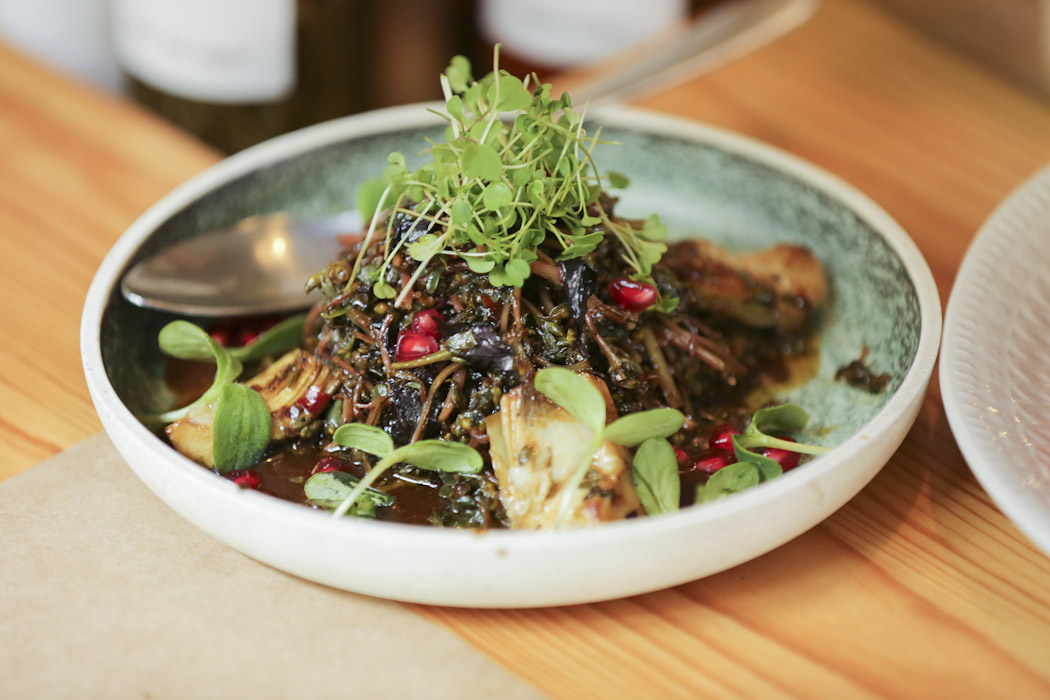 Jonjoli is made of sprouts from a bush that grows near the vineyards. They are most often prepared as pickles and mixed with olive oil. It is a popular snack that goes well with barbecued meat. In this version, the chef mixed the jonjoli with other kinds of fresh sprouts and vegetables and the result is an exquisite starter! 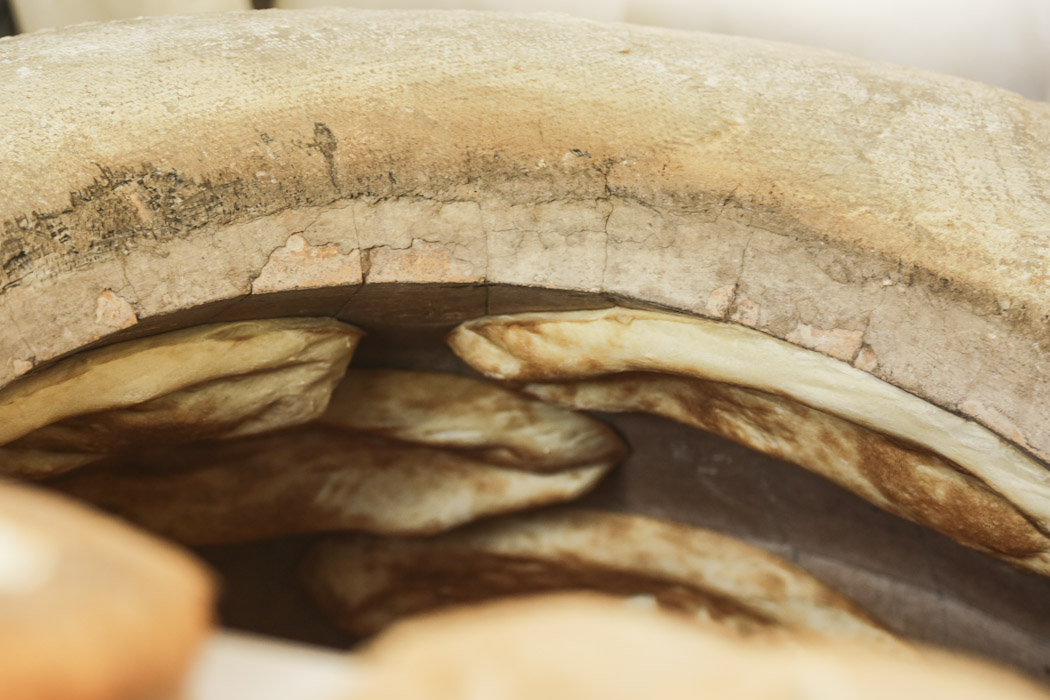 The oven where the puri (bread) is baked is called a tone. This is a circular clay oven against whose walls the bread is pressed to bake. In Georgia, almost every street corner has its baker and the smell of fresh puri is irresistible. It is usual to see everyone carrying several loafs of bread under the arm, hardly wrapped with a small piece of paper. 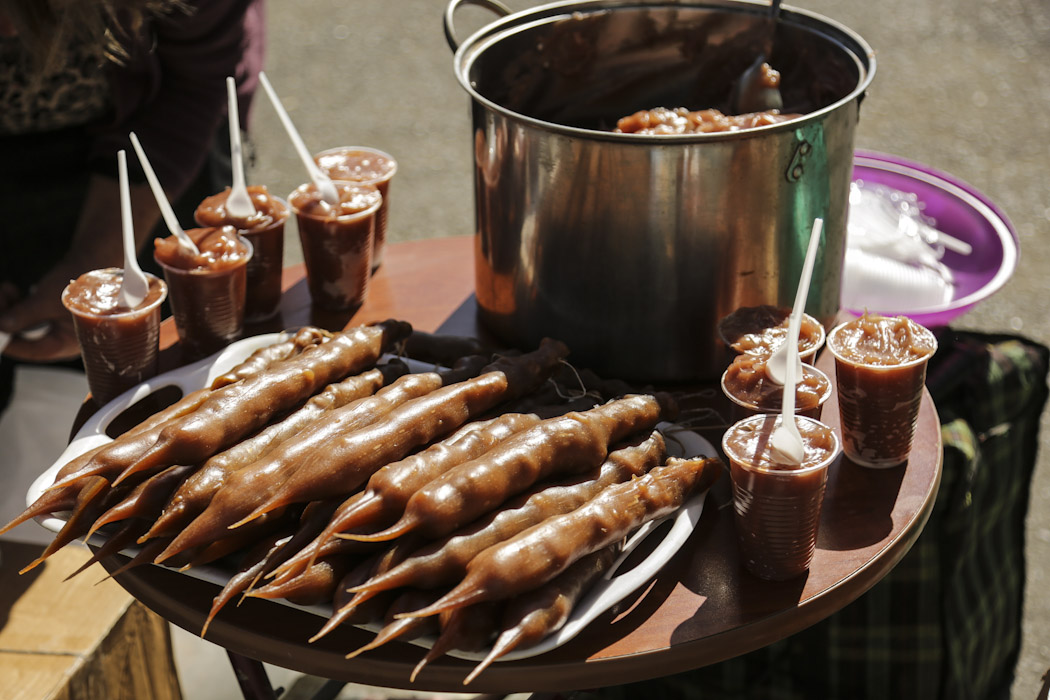 When we first saw the Churchkhela cut in slices and served to us with chacha, we thought this was some kind of smoked sausages. Utterly wrong! Churchkhela is a sweet snack, easily recognised because of its candle shape, obtained by repeatedly dipping a string made of nuts (all kinds of nuts, including seeds and even chickpeas) in a cream made of grape juice, sugar and flour.

Did you find this tasty?

You can read more about the places to visit in Georgia?