There’s a gaiety in the people of the Moselle, which could be justified by the mild climate of the region, by the way they marvel at the river or by the passion with which they grow grapes and drink their fermented juices…

We know that many – foreigners and Luxembourgers alike – come to the Moselle exclusively for its wine, late harvest wine and crémants (sparkling wines). There’s a huge concentration of winegrowers in the area, and it is undeniable that going from cellar to cellar, trying the different wines produced locally, and preferably accompanying them with typical gastronomy, is a tempting sort of holiday or leisure time-off. 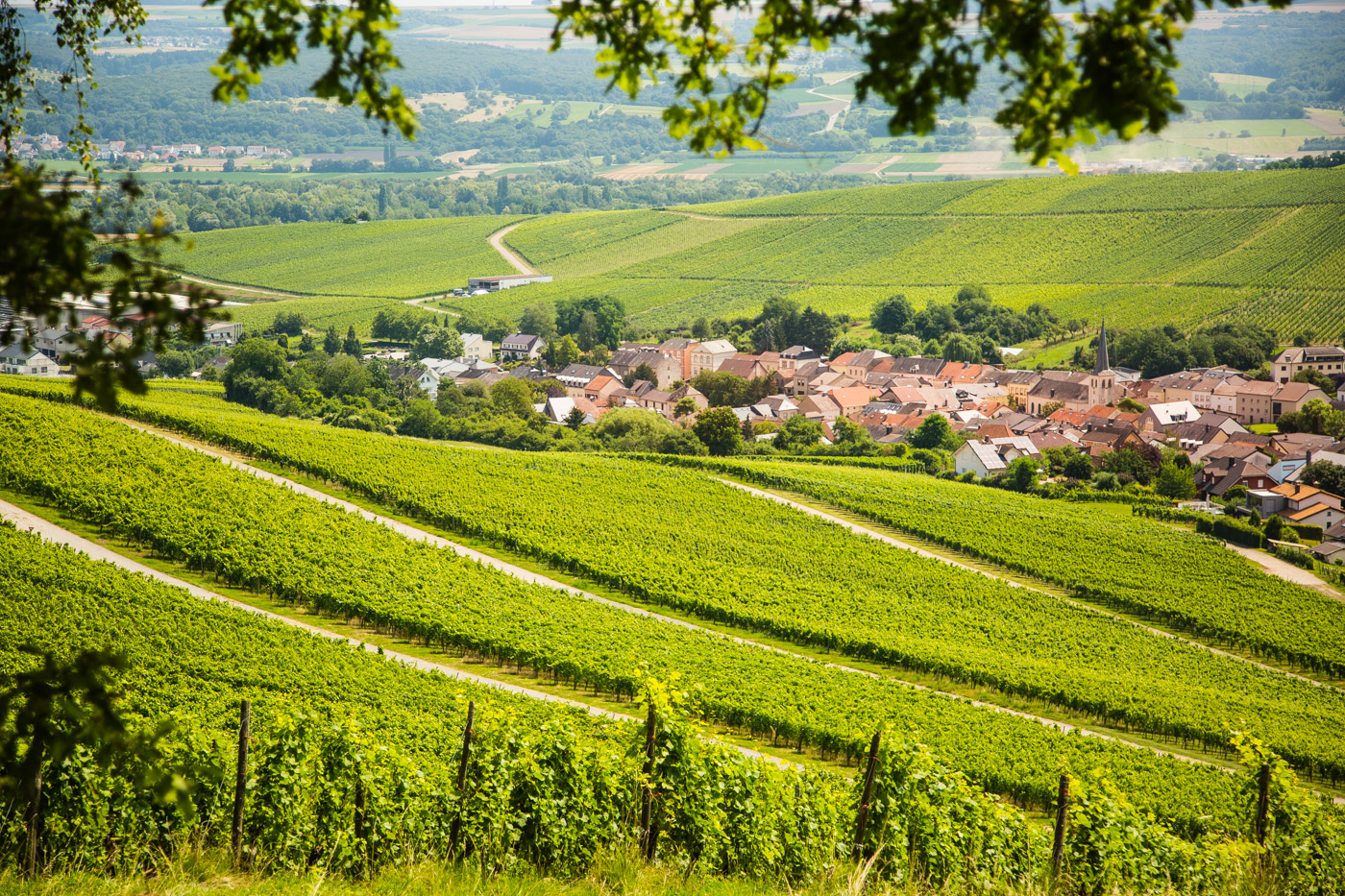 We have to add another reason to this; a microclimate bestows the shores of the Moselle river with some of the hottest days in the country. Wine and sun, no Luxembourger can resist this appealing combination. As for us, we were looking forward to a wine-rally that was going to take us through the local varieties: the three Pinots (Noir, Gris, Blanc), Auxerrois, Riesling, Rivaner, Gewürztraminer and Elbling. We were also looking forward to understanding more about wine production and to venturing into the rows of vines that spread out over the sun-drenched slopes of the river valley. 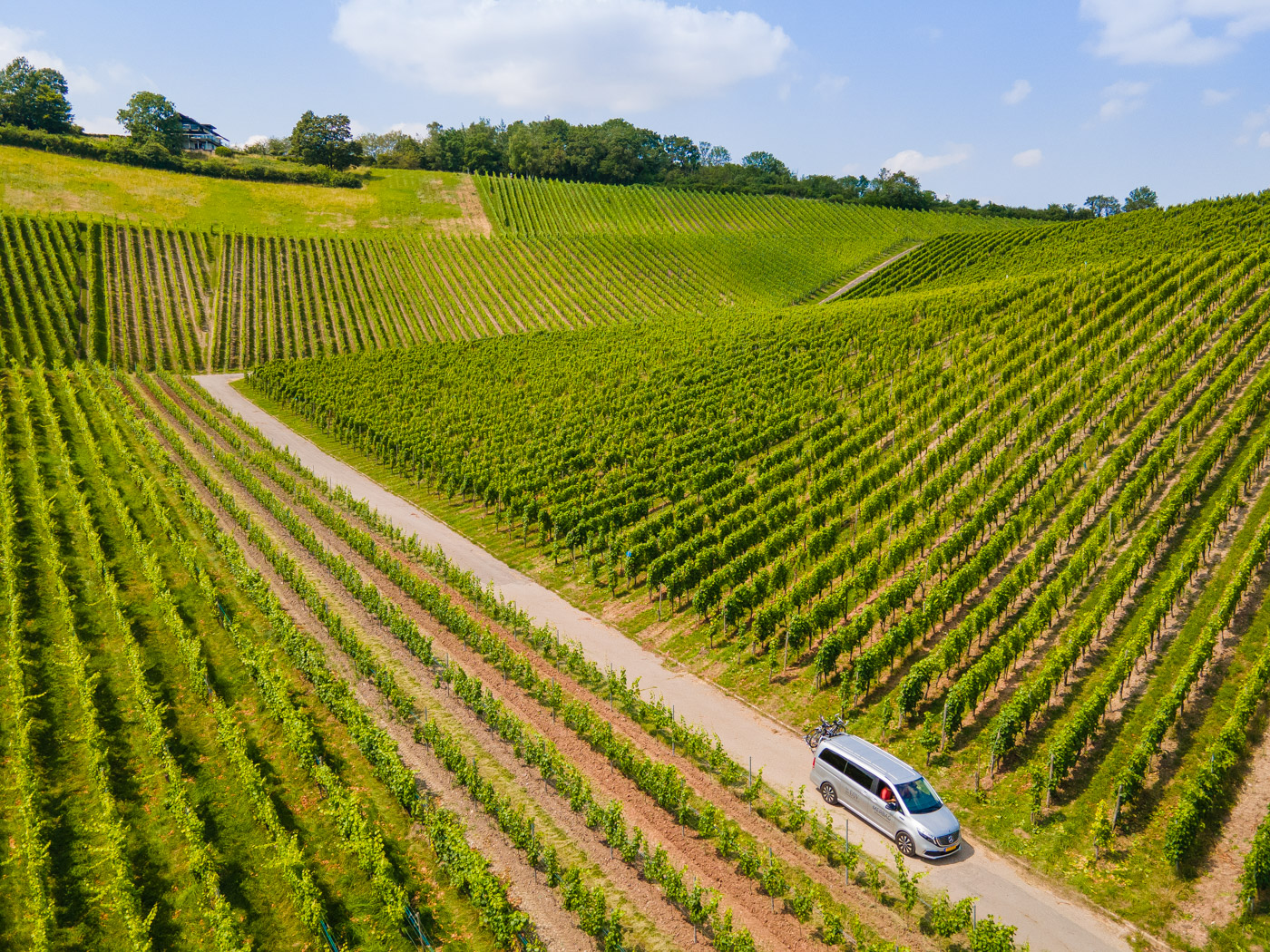 We reserved two places on the Guide For One Day Tour (a free Luxembourg initiative, in which locals take visitors on a more personal tour of their region. With some luck, you may see yourself on a tour of the capital lead by Prime Minister Xavier Bettel, for example!). Anne Berna, our guide, took us on a loop that started in her home village, Ahn, and followed part of the oldest of the three Dream loops: The Wine and Nature Path Palmberg. 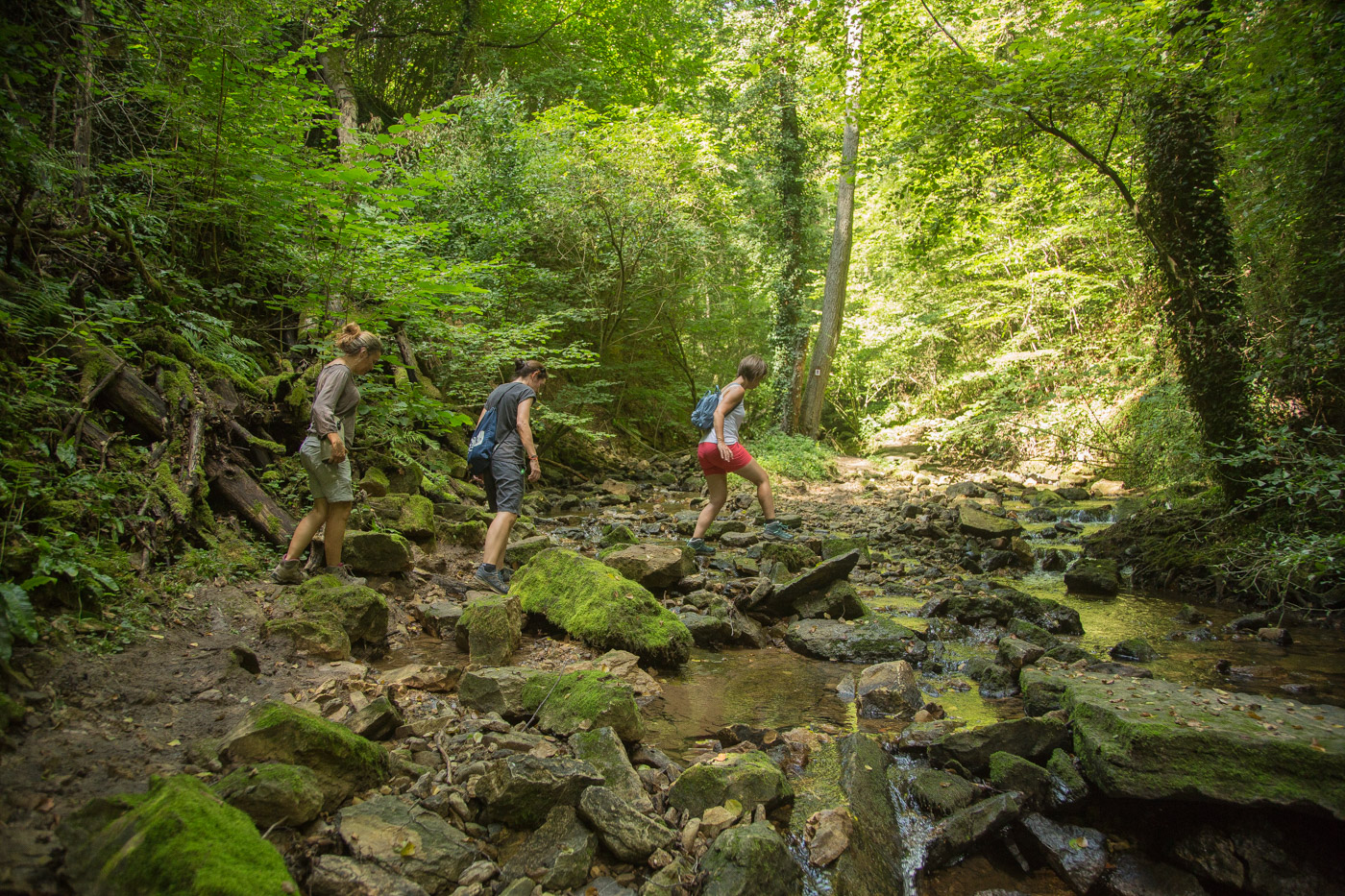 After a climb through a vine labyrinth and up a hillside, we reached the Valley of Donverbach, and followed the creek with its tiny waterfalls and wooded gorge. From there the forest opened into the nature reserve of Pellëmbierg with its long extensions of the protected boxwood – whose harvest is permitted only for locals on Palm Sunday – followed by a lovely meadow with wild orchids. After a tiring walk up the hill, we approached the steep shell-lime cliffs where the path slowly took us back to the vineyards and an incredible lookout with comfy seats and amazing views over Ahn. Such a lovely location was the ideal place to end the tour, with an elegant Riesling from Anne’s family domain Caves Berna. 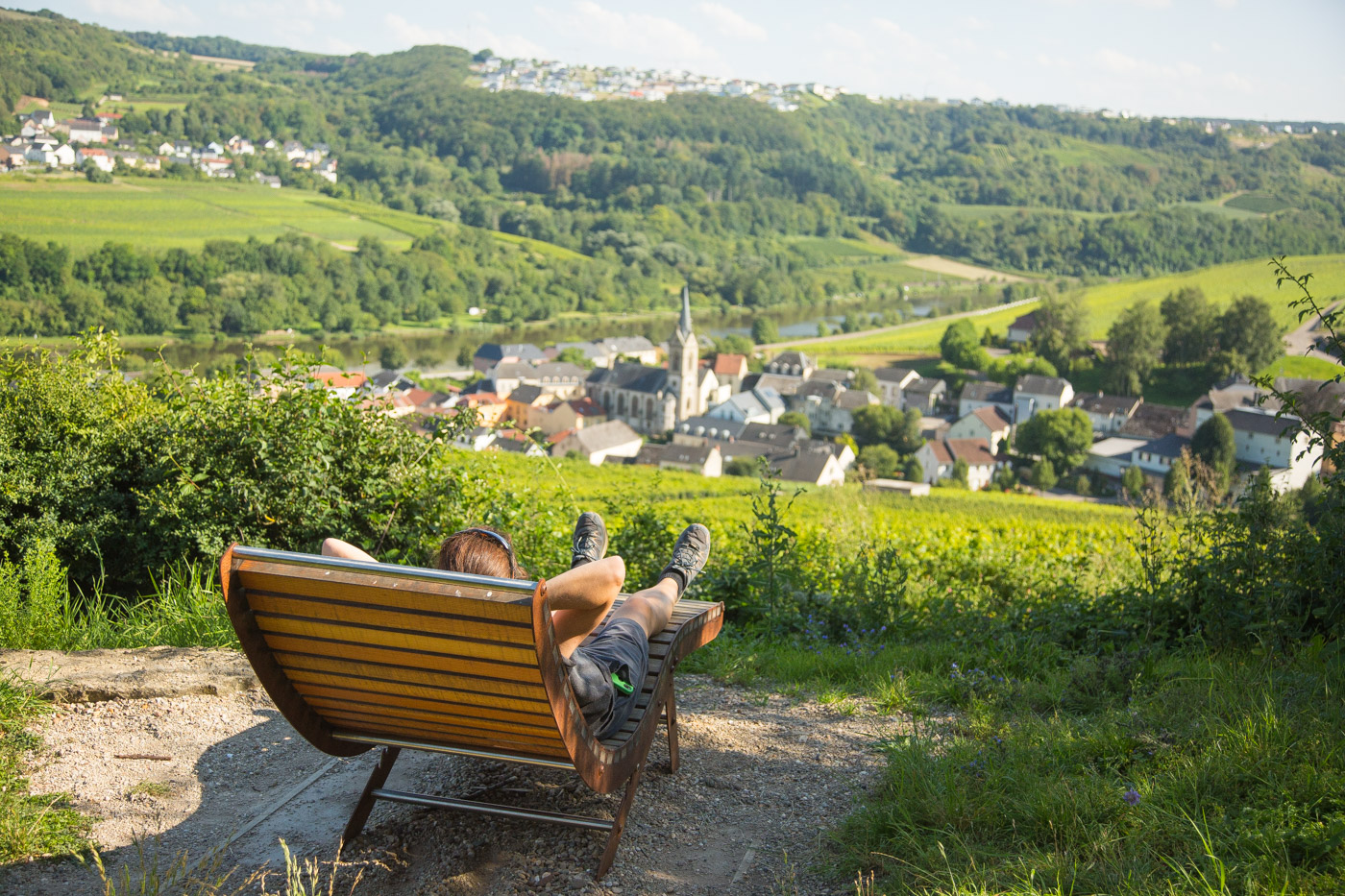 Anne’s knowledge about the qualities of this Riesling was priceless. From her we learnt to look for its aromatic, flowery character. We were patient and waited for it to open in the mouth for some final mineral notes, which add to the beauty of this wine. According to Anne these flavours are achieved because the grapes mature slowly in beautiful terroirs (Vogelsang, Göllebour, Elterberg, Wousselt and Palmberg)… Their vineyards are located in privileged lieux-dits, with good solar exposure and fertile ground, just a step away from their cellar. 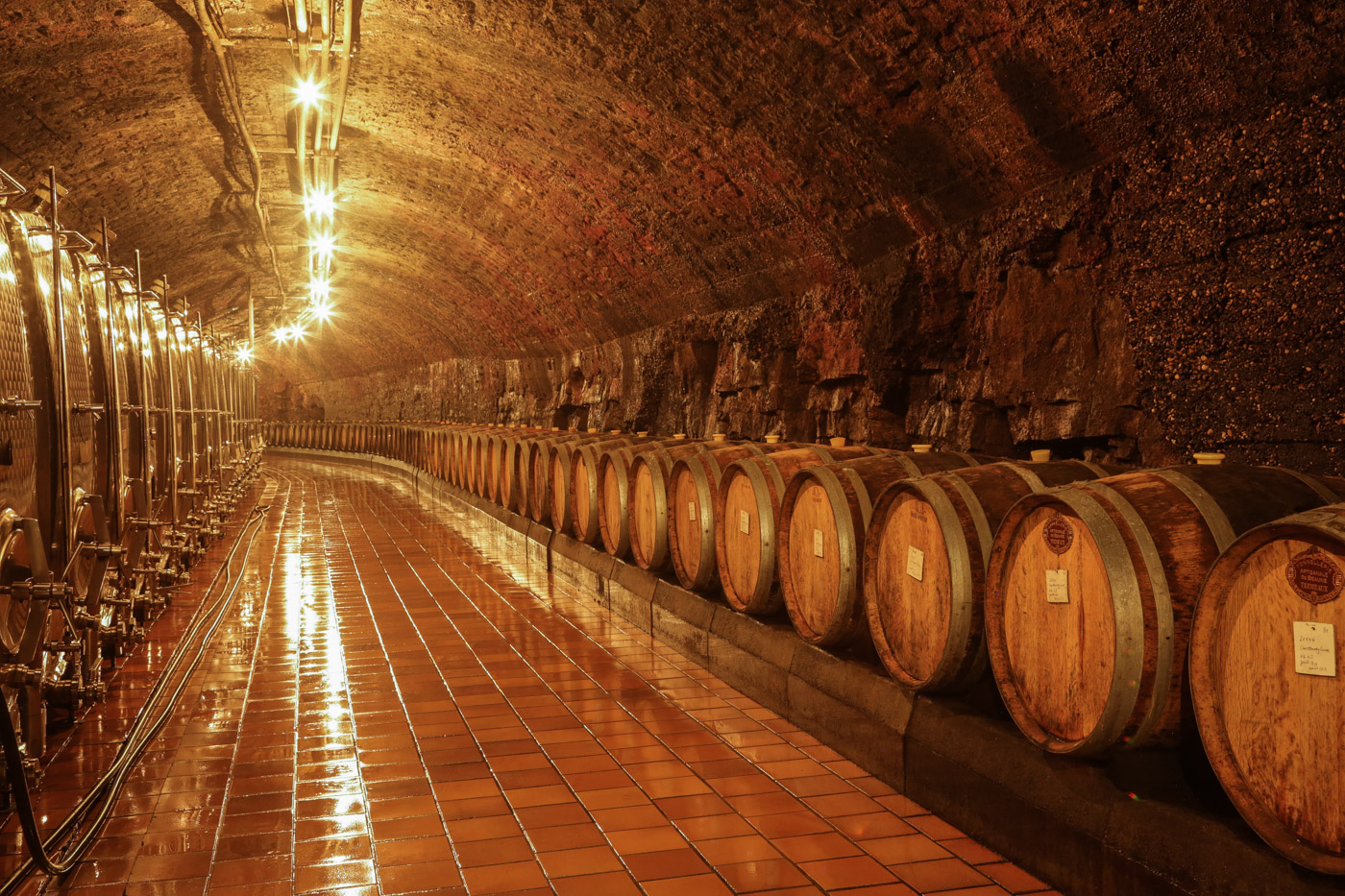 A mere 15 kilometres south of Ahn, in Remich, we found the Pearl of the Moselle, which refers to the prestigious St Martin Caves. They are emblematic because of their underground galleries, which have been dug into the rock and extend for over one kilometre. A visit to the dark and cool limestone cellars ends in a beautiful tasting room for a mouthful of several award-winning wines. We were advised to try the St Martin Blanc brut, a crémant which won a gold medal in 2020, in the Concours des Crémants de France et du Luxembourg. This is an esteemed prize and valuable recognition for a country that produces around 3,5 million bottles of crémant annually. 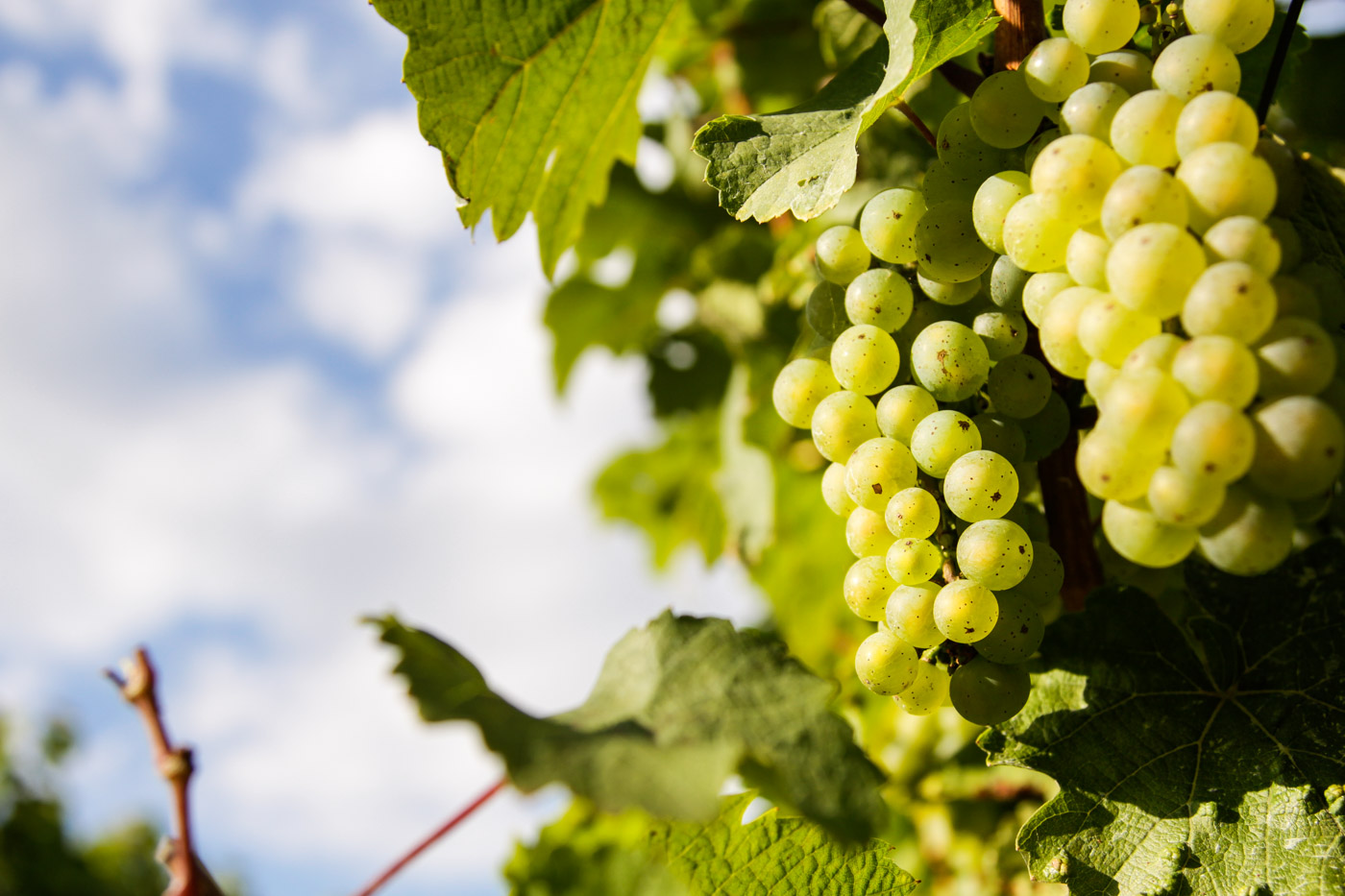 The protected designation of Crémant du Luxembourg can only be used by sparkling wines produced in the Luxembourgish Moselle region. It also only applies if the crémant is made according to a traditional method that respects several rules; such as, harvesting the grapes by hand, storing the wine on its lees for at least nine months without interruption in the same winery, separating the wine from the lees by disgorging, achieving the sparkle through a second fermentation in the bottle, and several others. While half-listening to the guide at the cellar, distractingly sipping our white-brut flutes, and leafing through the crémant catalogue that displayed so many other varieties (rosé, jubilée, cuvée, semi-sec), we grasped that the entire process was much too elaborate for a full understanding under the present, revelling circumstances. 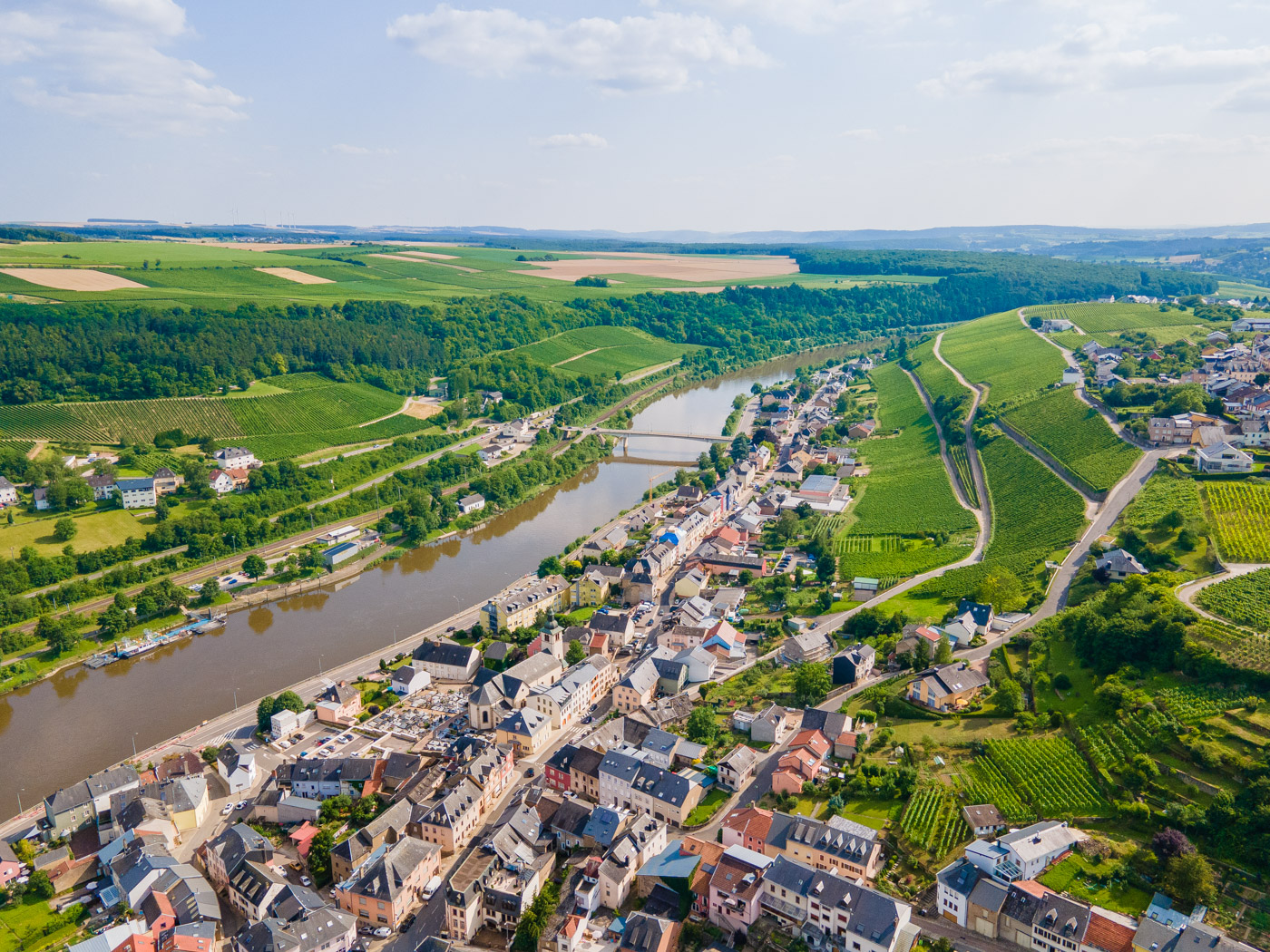 After a few days on the Moselle, we woke up with a mysterious headache. We decided to start the day with a river excursion on the boat, the MS Princesse Marie-Astrid, in Grevenmacher. We could, of course, have resumed our daily wine tour on board the Marie-Astrid, but it was still a bit too early for us to have yet another wine tasting, so we just took a relaxing moment to sit on the deck and enjoy the Moselle valley and vinescape from a new perspective, while drifting slowly aboard this comfortable ship, renowned for having been the signature spot of the Schengen agreement. 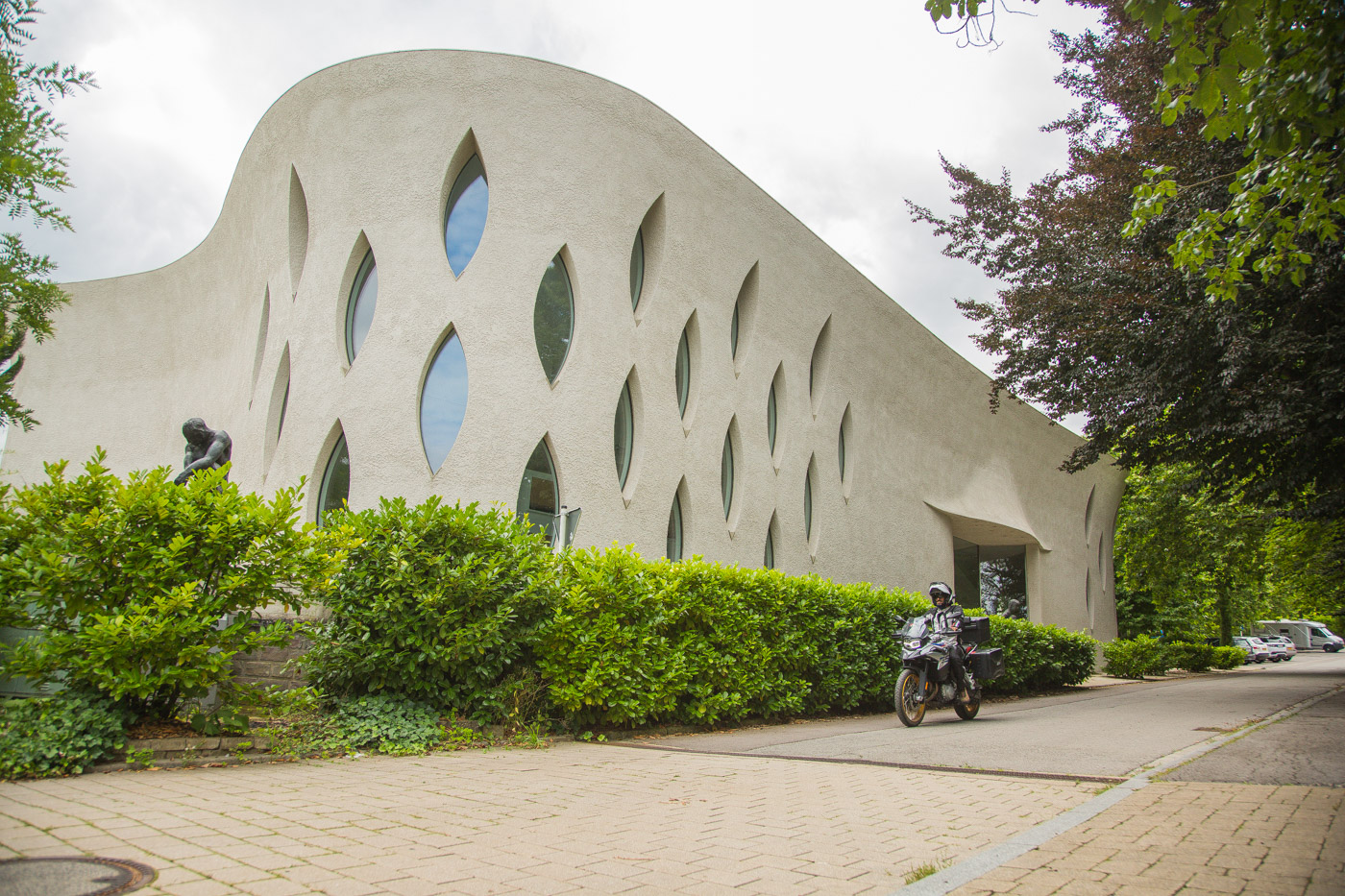 We disembarked in Remerschen, and walked straight into the Valentiny Foundation, which – since its creation in 2014 – has become a landmark of the region. Here we found sketches, drawings and maquettes of the Remerschen-born star-architect François Valentiny. The foundation is itself a remarkable building that bears the signature style of Valentiny. A stay in the region of the Moselle is the perfect opportunity to spot many other works from this internationally-renowned architect. He excels at creating buildings with pure lines whose main facades resemble open windows to the world. 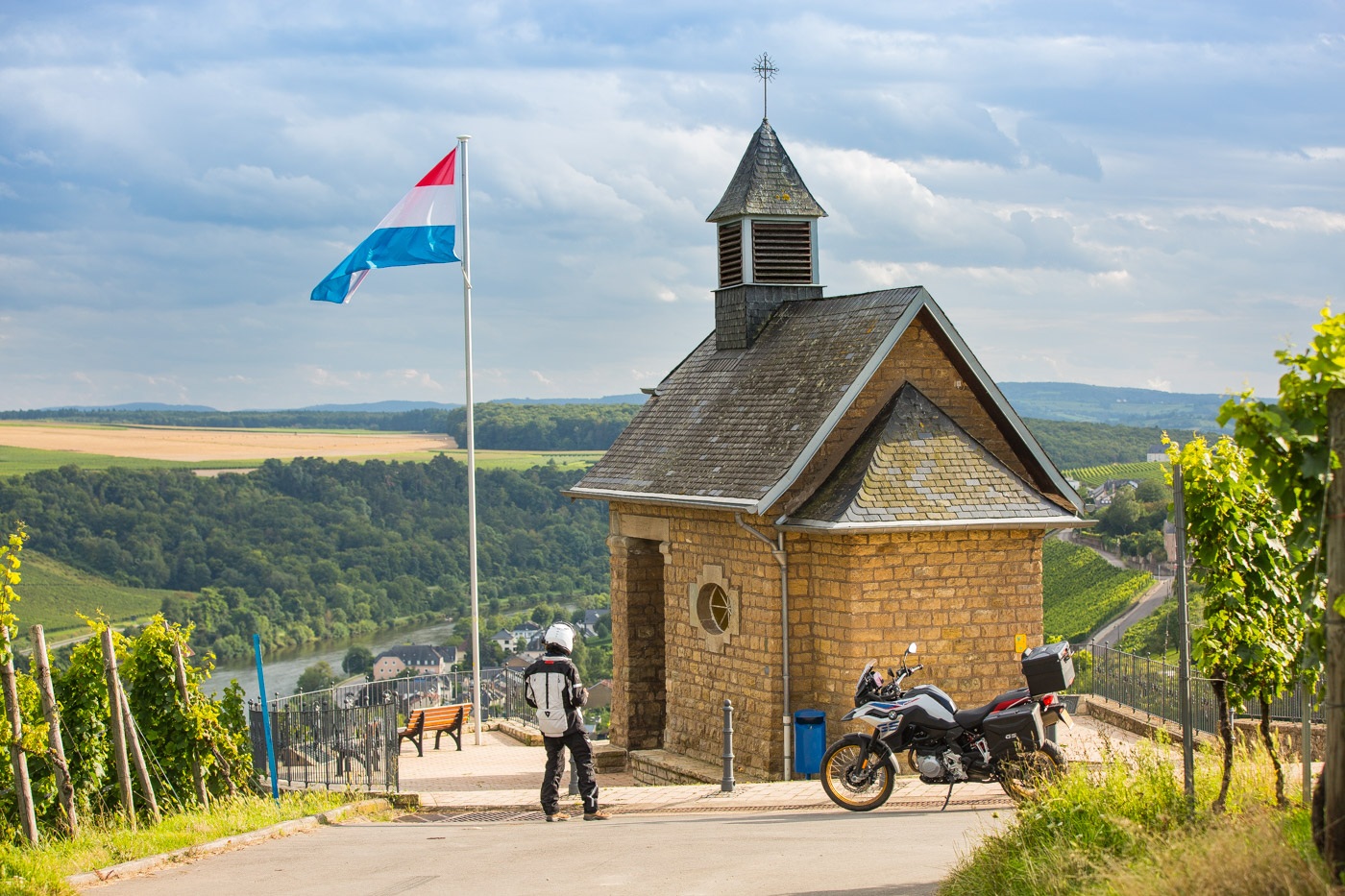 With full stomachs, we still wanted to visit another domaine, which had a singularity of which we were particularly fond. The Schmit-Fohl house has been cultivating all of its vineyards in organic viticulture since 2017. Nicolas and Mathieu took over the wine business, which has been in the family since the 18th century, and decided to convert it into an almost exclusive artisanal way of doing things, including stripping the vines and manual harvesting, while favouring limited yields. They also discontinued the use of chemicals to regenerate their soil, replacing them with the use of legumes. We found this so smart, and wondered why more producers weren’t doing this? 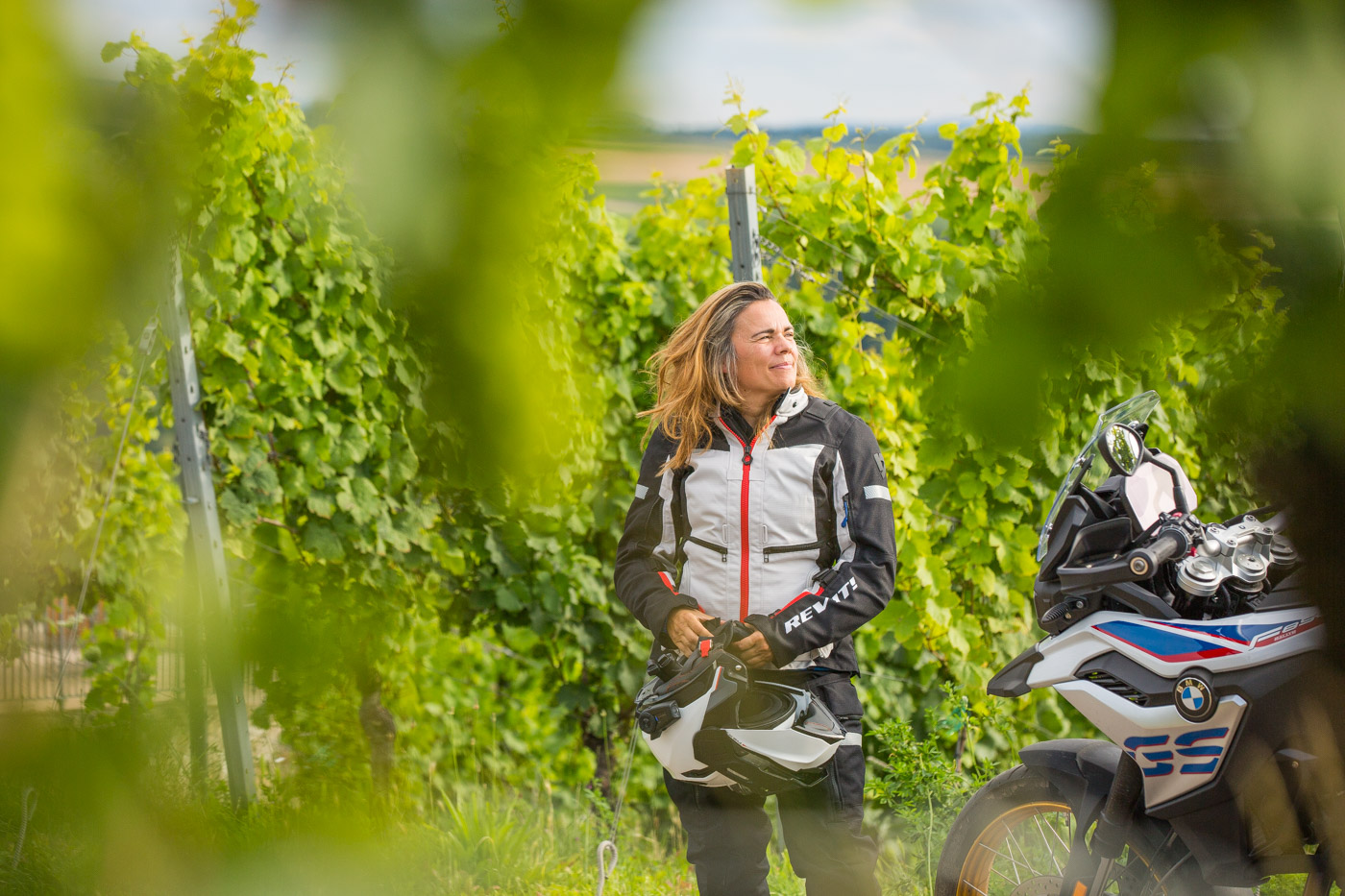 Their success in keeping a sustainable business, that is also economically profitable, is the proof that it is possible to produce wine in a way that conserves the ecological balance in a natural way, through perseverance and with the right attitude. We just wish these two brothers would inspire more producers (and consumers alike), so that more sustainable development is achieved. Wouldn’t we all love to see more organic wine on the market? 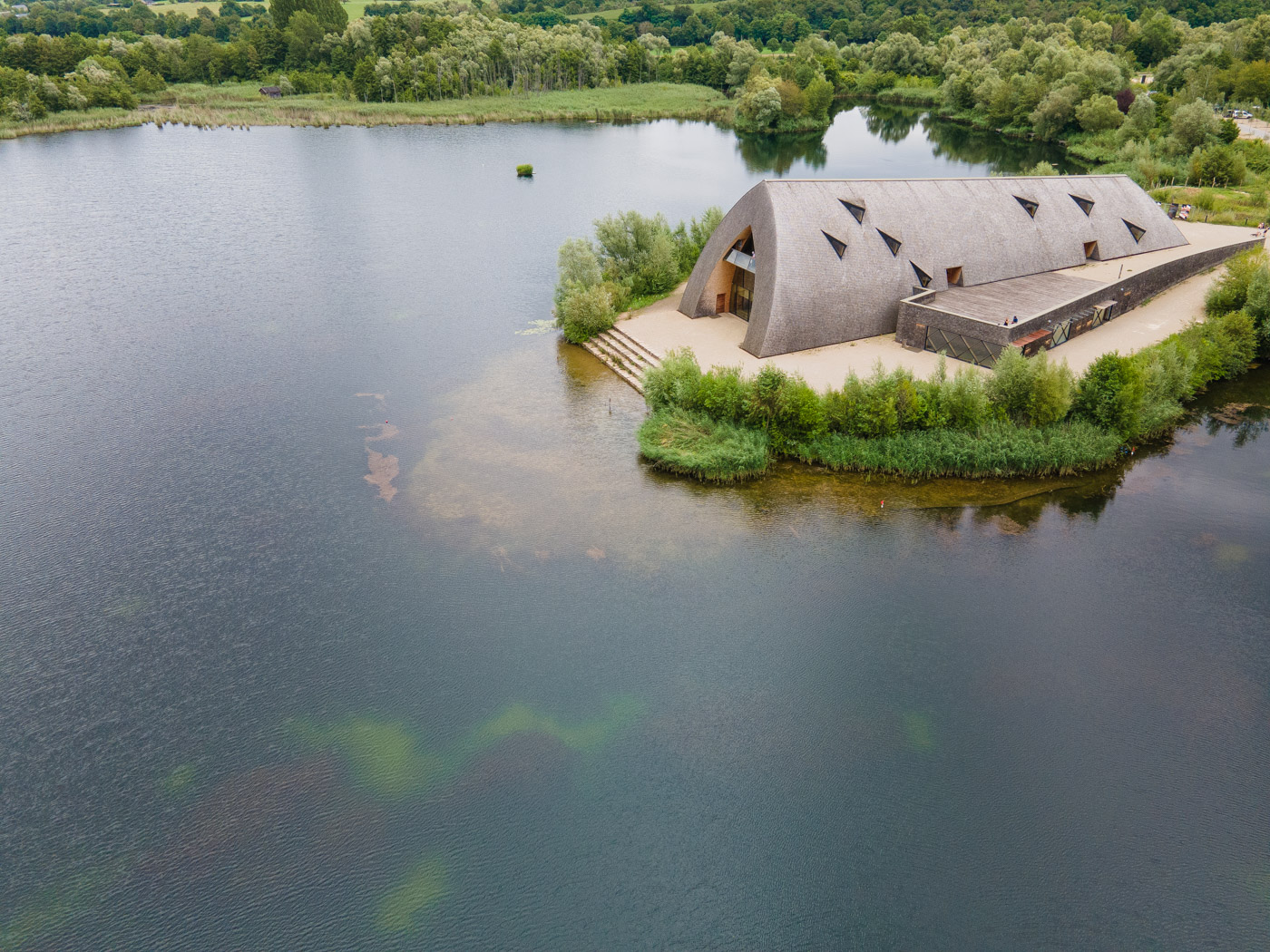 The fact that most producers still use pesticides in their vineyards is, undeniably, a drawback to the aesthetically pleasing vinescapes. To compensate for the dangers of industrialised viticulture, the regional authorities make twice the effort to protect the local vegetation and wild life and to restore the equitable balance of nature. The Haff Réimech, with its numerous ponds, is a nature reserve that has been created for this reason. It is a real bird sanctuary, and attracts many bird lovers because of the diversity of species that live there permanently, or that use it during their migratory routes. In summer, the Remerschen ponds are hugely popular with people, too. At the edge of the reserve, the Biodiversum Remerschen is an interactive museum with exhibitions about the local fauna and flora. Established in a long wooden building created by François Valentiny, who was inspired by the longhouses of the Celts who settled this area long ago, the Biodiversum is also the starting point of several trails that circumnavigate the ponds. 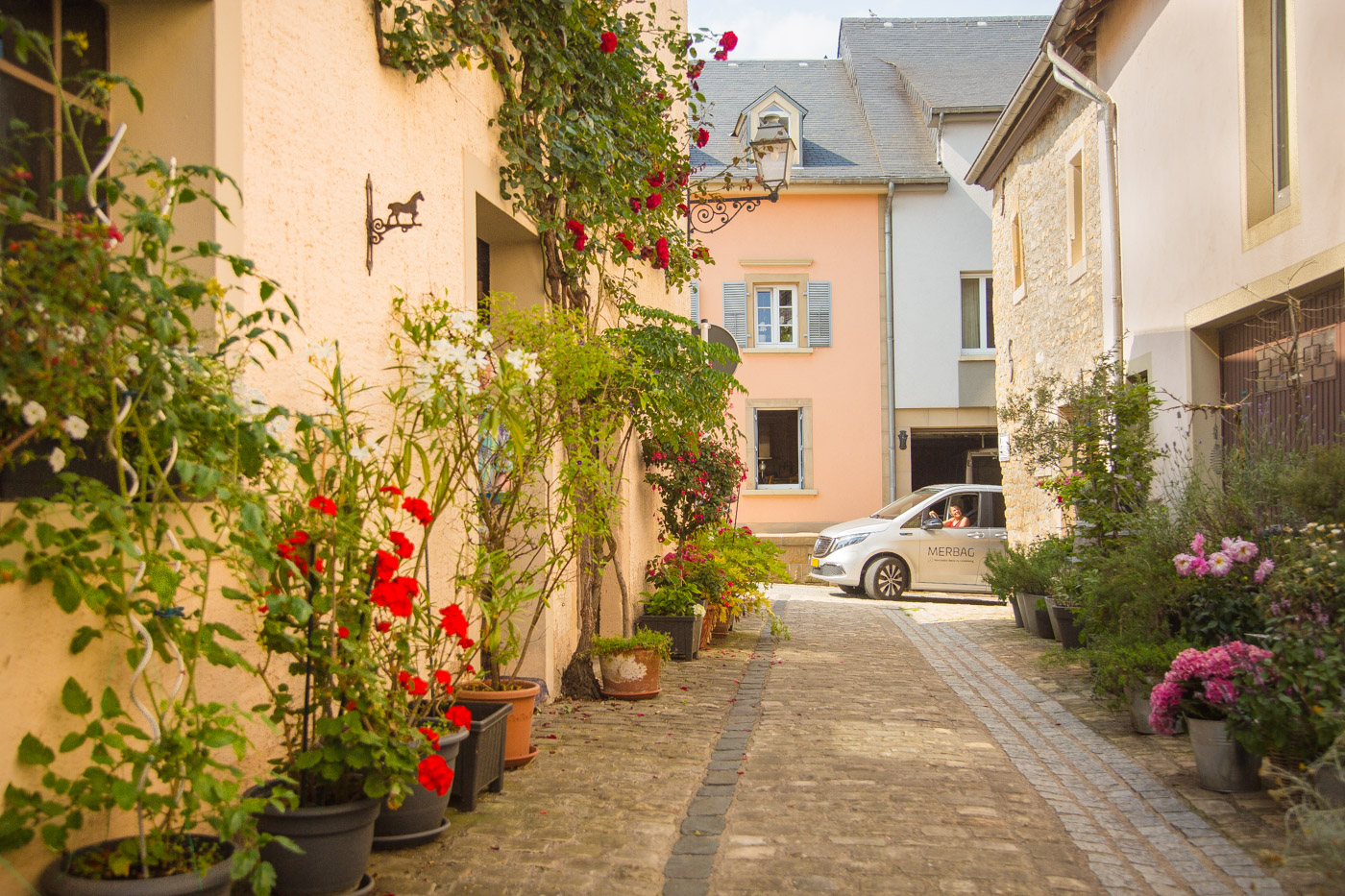 If after all the wine tasting, the hiking or cycling amongst the sloping vineyards, you just need to soothe your body, either the ponds or the thermal park in Mondorf are excellent options to relax. The thermal pools in Mondorf are renowned for their therapeutic qualities but are not necessarily specialized in hang-overs, so make sure you do not overestimate your alcohol capacity with all the tempting wine tastings…