What to Visit and See and Do in Vientiane

Luang Prabang’s history goes back to the VII century, when it was conquered by Khun Lo, a Tai prince. The city is also connected with the history of the kingdom of Lan Xang, when in 1353 it became the capital of the kingdom and received the name as it is known today: Luang Prabang. It lost its title of capital temporarily in 1560 to Vientiane, to regain it as royal capital of the Kingdom of Laos until the take over of the Pathet Lao in 1975.

The town has been listed as a UNESCO heritage site since 1995 for its unique and well preserved architecture, with many French colonial influences, and for its religious and cultural heritage. The historical centre is located on the peninsula where the Mekong and the Nam Khan rivers meet. With its more than 34 temples, it is not surprising that life in Luang Prabang revolves around Buddhism, where one of the biggest monk communities is installed.

This is a non-exhaustive list of some of the places that can be visited in Luang Prabang:

1. Call on the Buddhist Temples 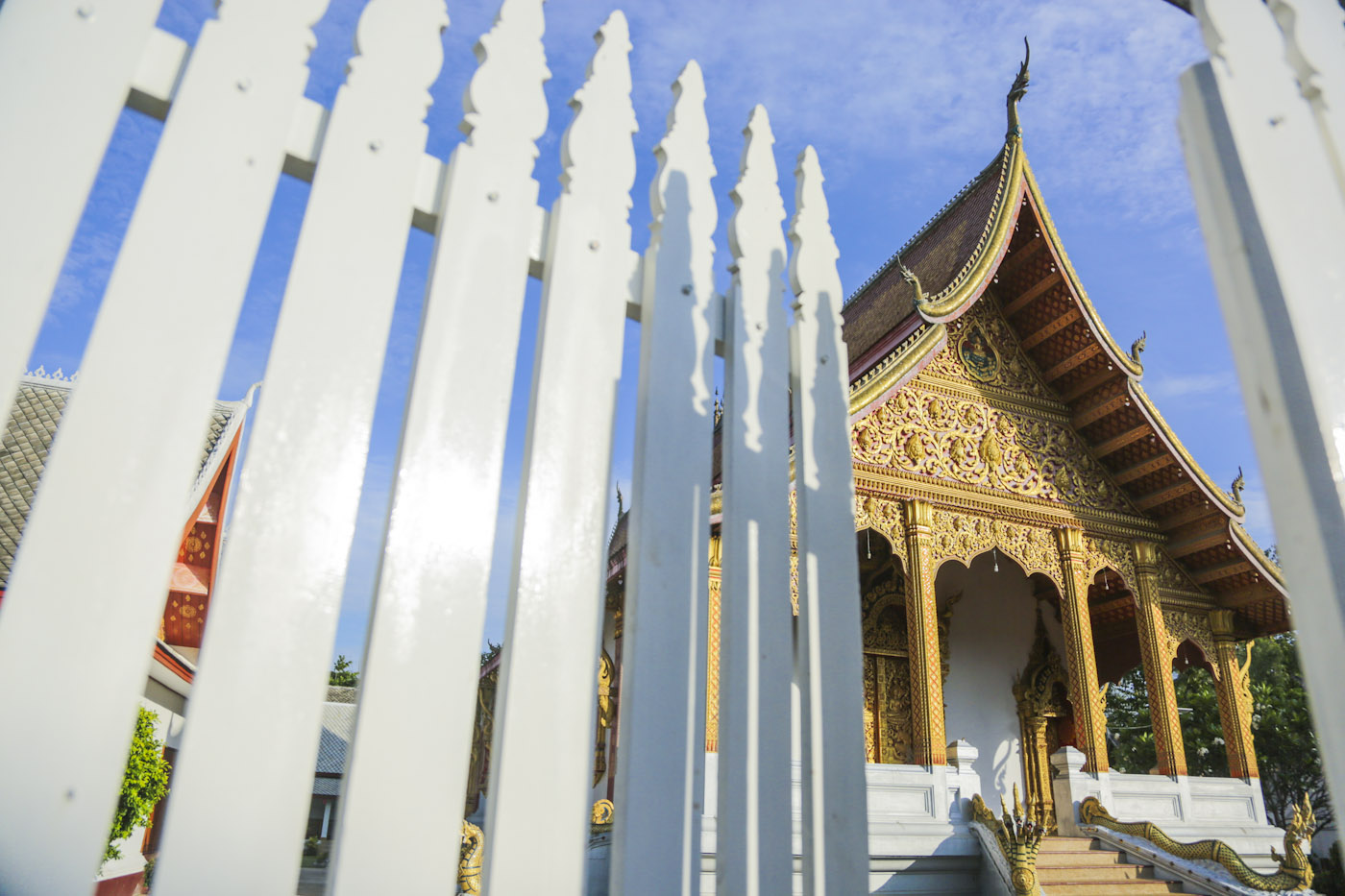 There are 34 temples spread throughout the city. It is possible to visit them all, though some are more accustomed to receiving foreign visitors than others. In some temples, entrance is free while in others, a fee is asked at the entrance. Whichever you choose to enter, dress appropriately, covering shoulders and knees and be respectful of the holy place you are visiting.

>> Find out more about the most beautiful temples to visit in Luang Prabang. 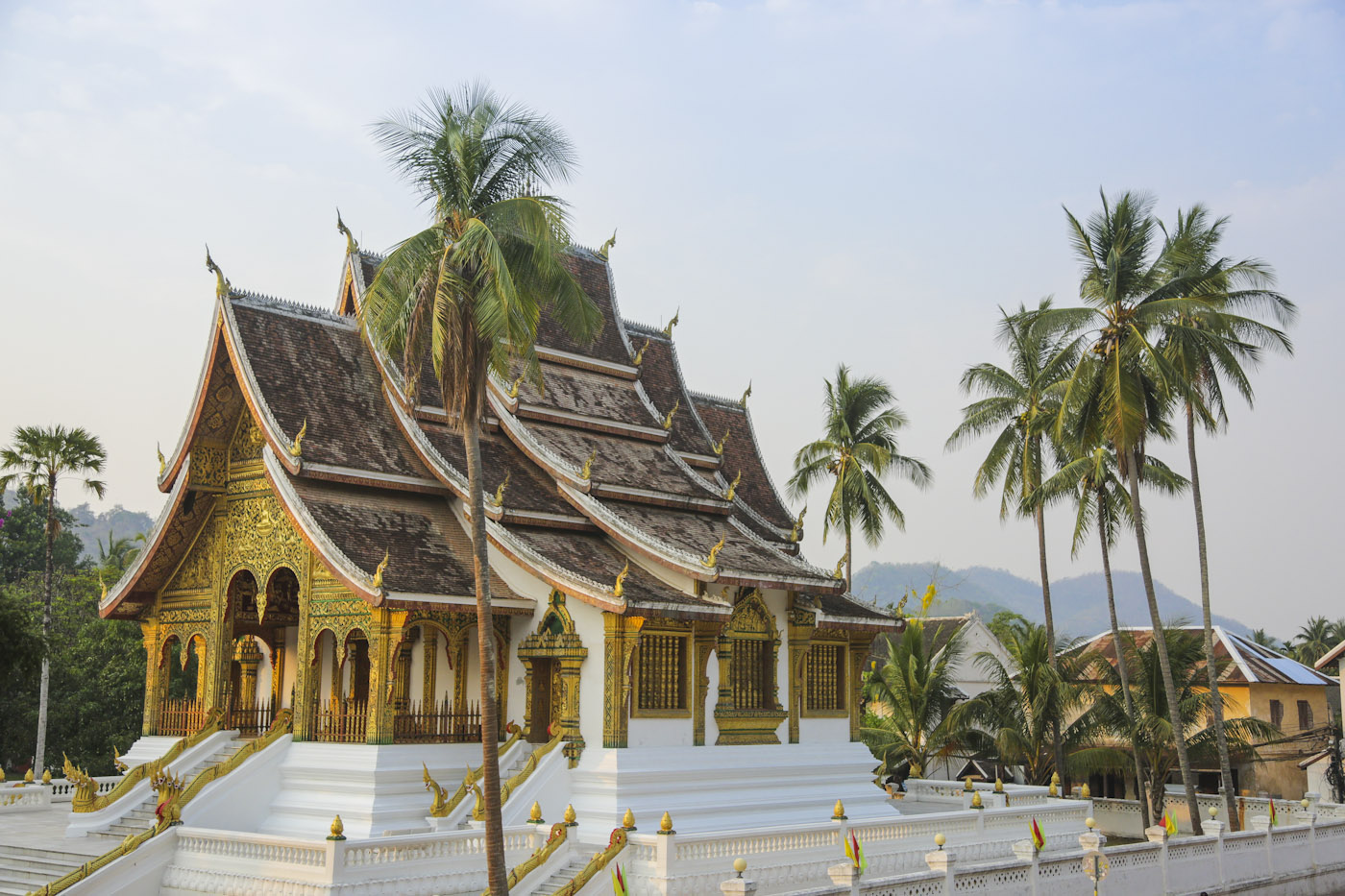 Between the Mekong River and Mount Phousi, that’s where the Royal Palace is located. It was built between 1904 and 1909. Being built during the French occupation, it is unsurprising that the palace was built in a mix of traditional Laos style and French Beaux Arts. It is the last palace where Lao royalty lived, until 1975, when the communist party, Pathet Laos, came to power and overthrew the monarchy. The museum also houses an exhibition of antiques and traditional artefacts as well as the five vehicles that belonged to the royal family.

A visit to the Royal Palace Museum also offers access to the Haw Pha Bang which was built to house the statue of Phra Bang, the most sacred Buddha image in the country, and which gives the city its name. Phra Bang is the palladium of Laos. During Pi Mai, the Lao New year, the Phra Bang is taken from Haw Pha Bang to Vat Mai during a procession. There the Buddha image is bathed with perfumed water and the water is take home to purify home and family. 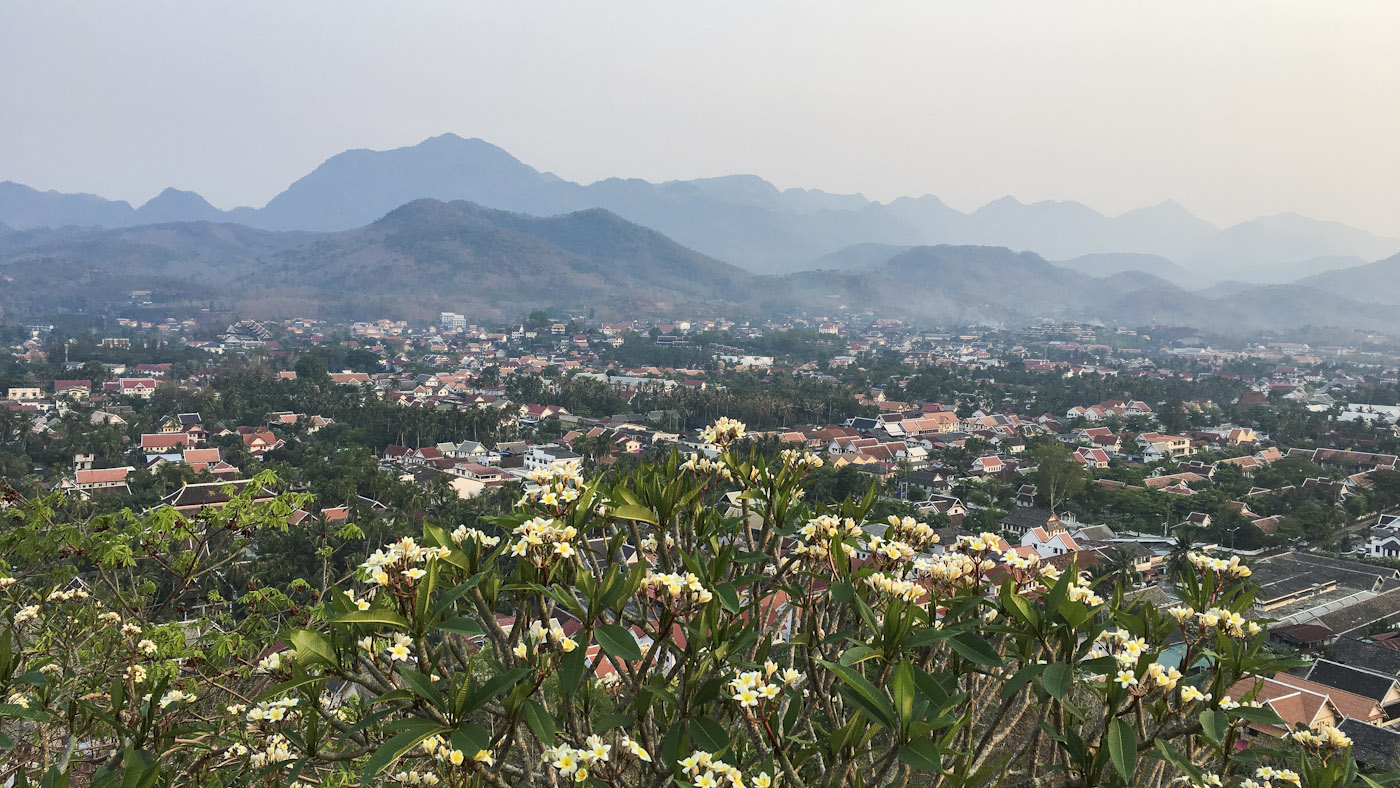 There’s a tiny hill that dominates the city of Luang Prabang. Two sets of stairs (one located opposite of the Royal museum, and the other one on Thanon Phousi street) give access to the top of the Phousi mountain. At sunset both stairs get busy with locals as much as foreigners heading up the hill for one of the limited places to watch the renowned sunsets. The climb is not easy – 328 or 355 steps, depending on which side you climb), though the views are worth the effort. From the southern stairs, one passes a Buddhist temple, where  monks assemble for the daily chants at around 5h30 pm. On top of Phousi there’s That Chomsi, a golden stupa topped with a 7-tiered parasol.

Price: Free during lockdown, but there’s a booth for tickets 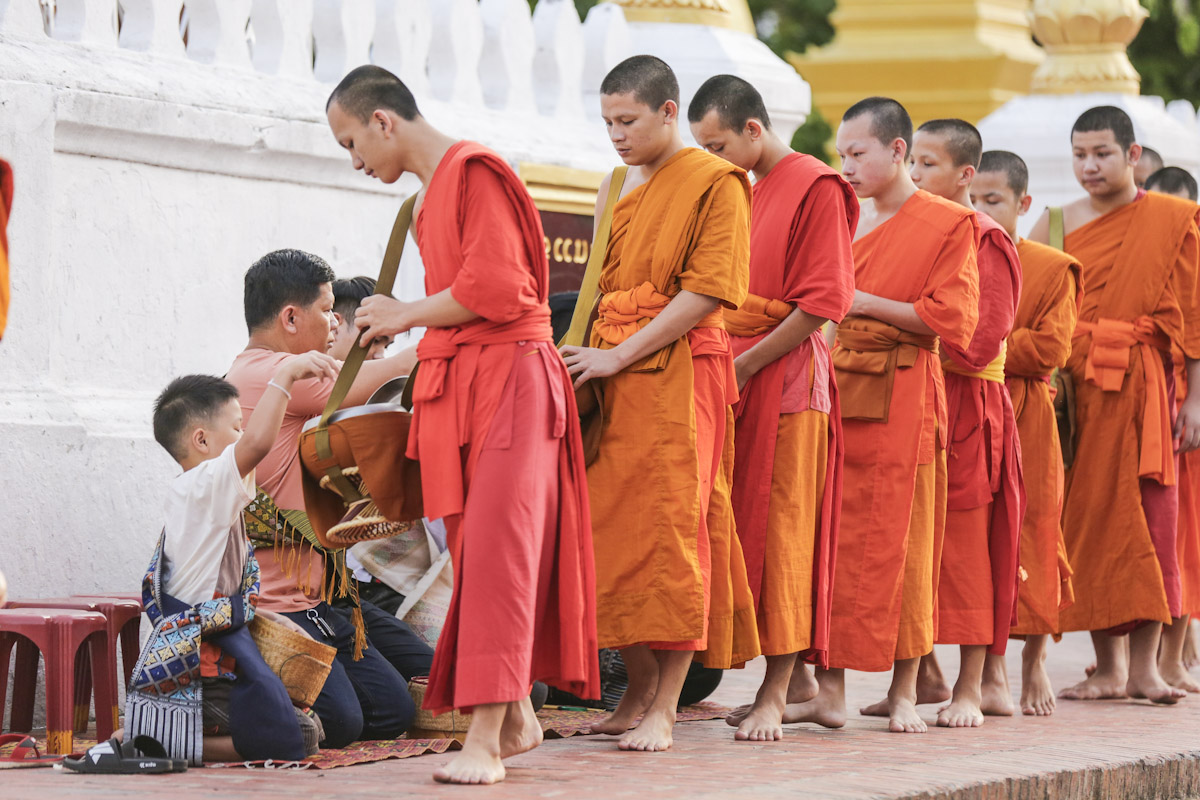 The most popular Buddhist ceremony in Luang Prabang – and one that attracts many curious onlookers to the streets of the city, every early morning – is the almsgiving, or Sai Bat. Hundreds of barefoot monks, dressed in their usual orange robes, make a silent procession along the streets, especially around Sakkaline Street, collecting alms from worshippers. During the ritual, the monks open their alms bowls so that sitting devotees can fill them with their offerings, especially sticky rice, which will be the monks’ main meal of the day. It is a fascinating ceremony that is not about charity but also about giving laypeople a chance to gain merit. the daily tradition of locals paying alms to the monks.

5. Eat at the Night Market 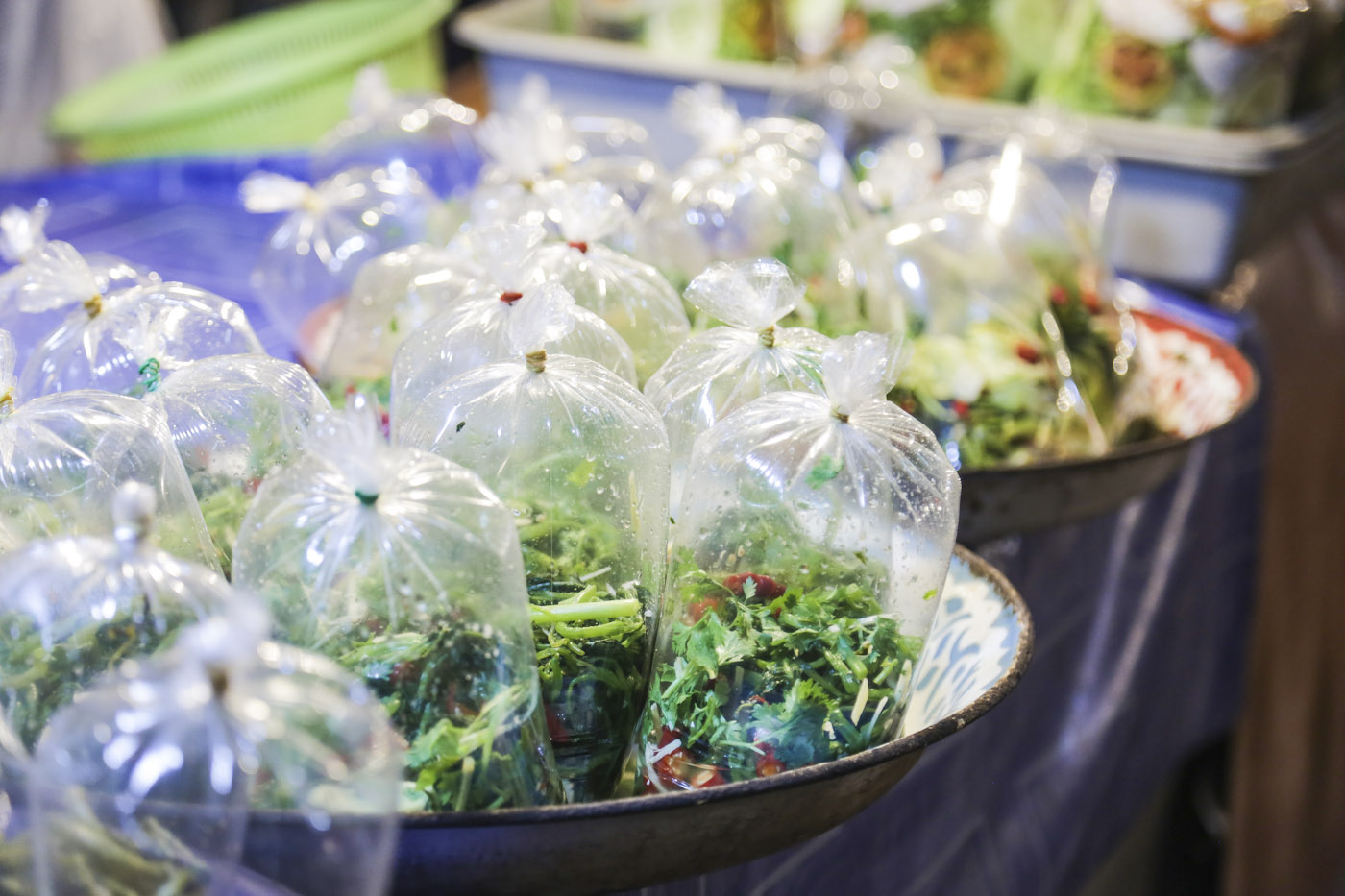 The night market of Luang Prabang is probably the best market to eat out in the entire country. Located in a large square opposite the Indigo house and in a tiny alley that goes from there to the morning market, in the night market one finds all kind of delicacies: Khao Soi, the typical Lao noodle soup, the most succulent Sai Oua or Sai Kok Lao sausages, spicy grilled meat on skews, salted barbecue fish, grilled bananas, fried omelettes, spring rolls, dry river weed, grilled eggs (Ping Kai) and, of course, Tam Mak Hoong (papaya salad).

6. Stroll Along the Tiny Alleys of the Peninsula 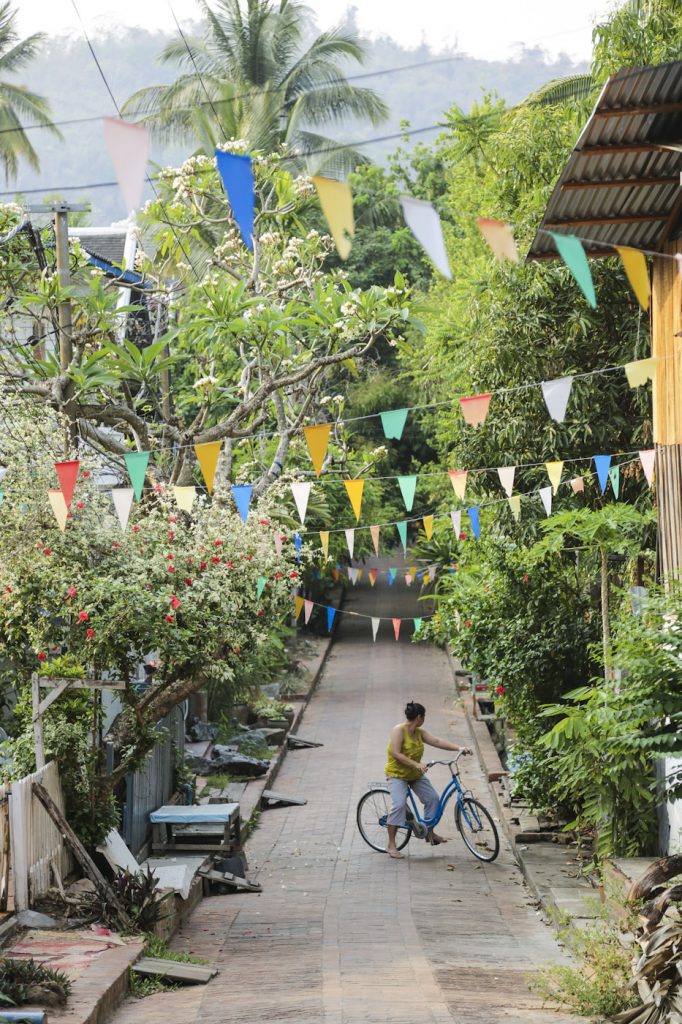 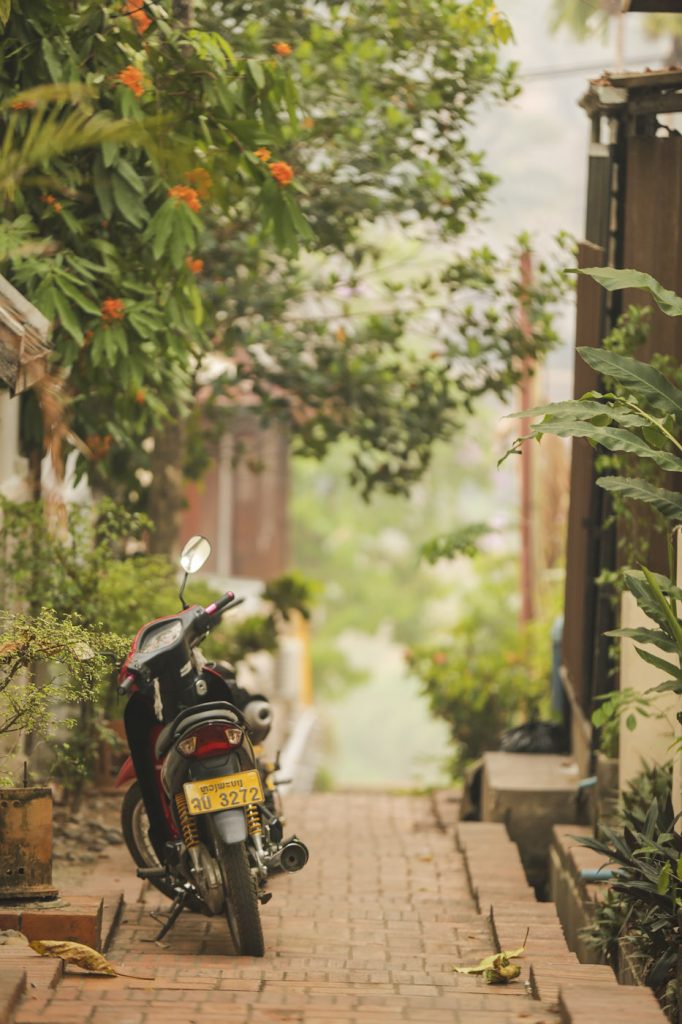 Luang Prabang is the perfect town for one to get lost in one of its many tiny alleys. There’s such a cosiness in wandering through the terra-cotta bricked streets of the old peninsula. All yards are filled with fruit and flower trees that spread their fragrances to the streets. Our preferred aroma came from the frangipani which is also the national flower of Laos.

7. Cross the Bamboo Bridges over the Nam Khan River 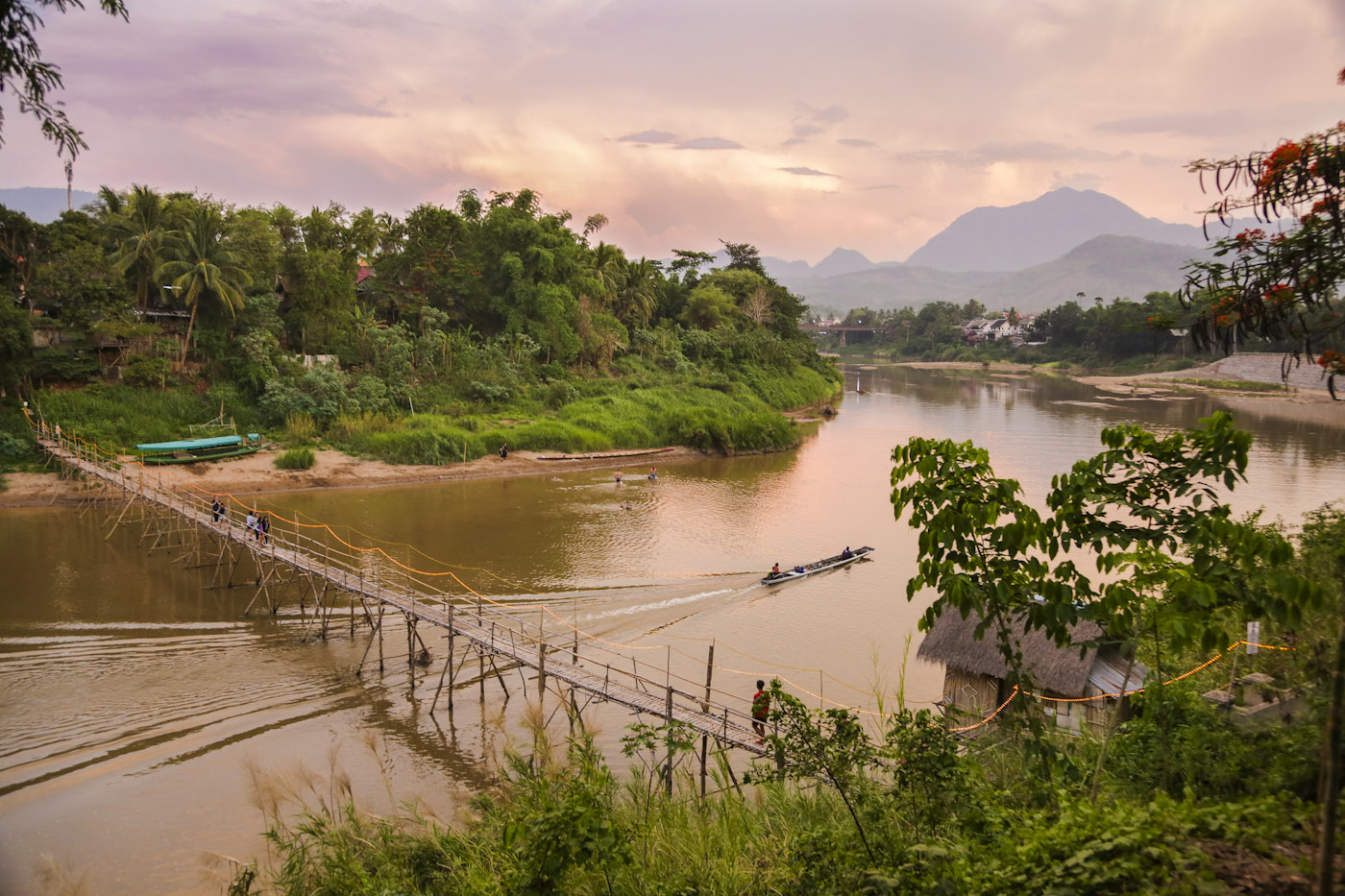 There are at least two bamboo bridges over the Nam Khan river. One of them even gets illuminated by night. It will take you to one of the best restaurants in Luang Prabang, outside the peninsula, famous for the typical Lao barbecue called Dyen Sabai.

8. Shop at the Handicraft Night Market

The handicraft night market of Luang Prabang is the biggest of its kind in Laos. From 5 pm the Sisavangvong street closes to the traffic and is filled with stalls selling all kind of souvenirs. Choose the locally made products, in order to help local economy. There are many Lao textiles, handmade paper, bamboo baskets and wooden household ware.

9. Learn about the Ethnic Groups at the TAEC Museum 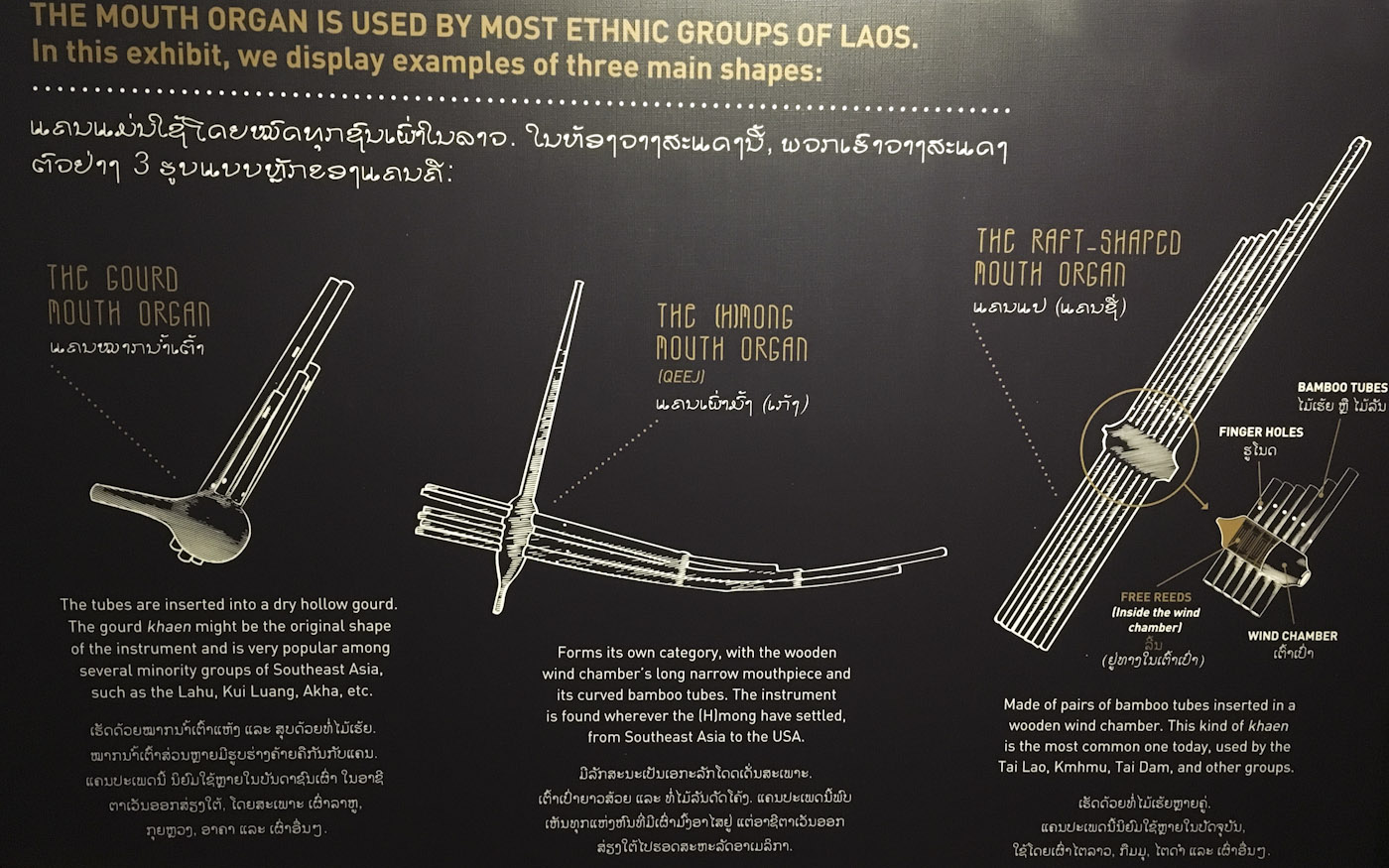 The TAEC museum (Traditional Arts and Ethnology Centre) presents and gives information about the diverse ethnic cultures and peoples of Laos with permanent and temporary exhibitions. The permanent exhibition has a rich collection of traditional artefacts, from both the domestic life and the religious rituals of different ethnic groups: clothing and textiles, household tools, musical instruments, etc.

At the time of our visit (2020) the temporary exhibition ‘Voices of the Wind: Traditional Instruments in Laos’ was featuring many mouth organs from different groups and explanations about the importance of these instruments in the daily life as well as in the different rituals and religious ceremonies.

Throughout Southeast Asia one gets used to finding many massage shops, that offer good quality massages for very cheap prices. Laos is no exception, of course. The price of a massage is usually related to the quality of the infra-structure, not necessarily with the quality of the massage itself. So, if you don’t require anything fancy, you can have a massage in a tiny, simple shop on every street of any village in Laos. 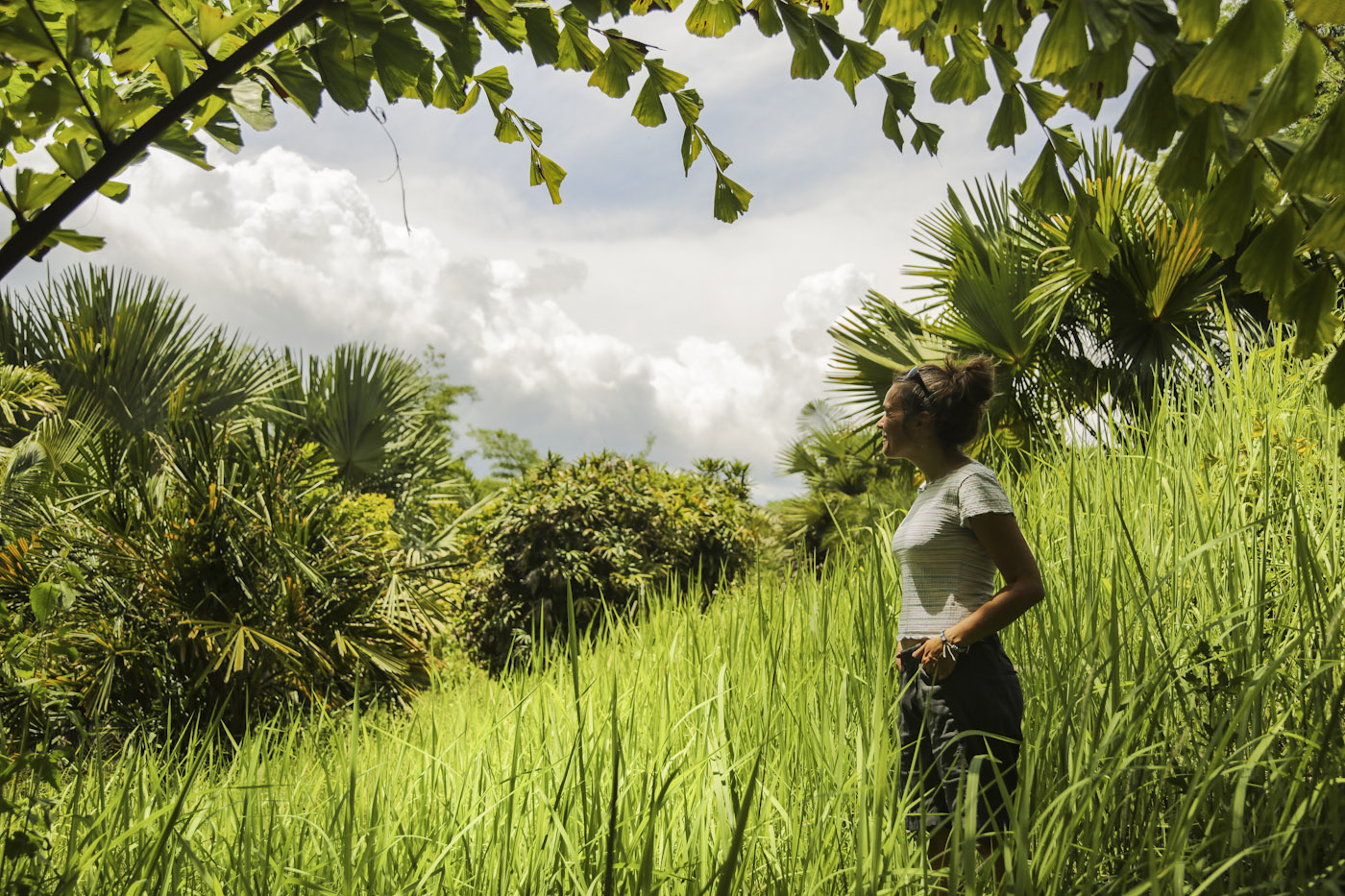 Price: 25 dollars and includes besides the entrance ticket and the boat trip to cross the Mekong, an orchid talk (at 11am and 3pm in the Public Nursery); a bamboo handicraft workshop (at 10am and 2pm in the Baci Sala) and ann herbal tea tasting (all day in the cafe).

12. Grab a Place at the Garavek Story Telling 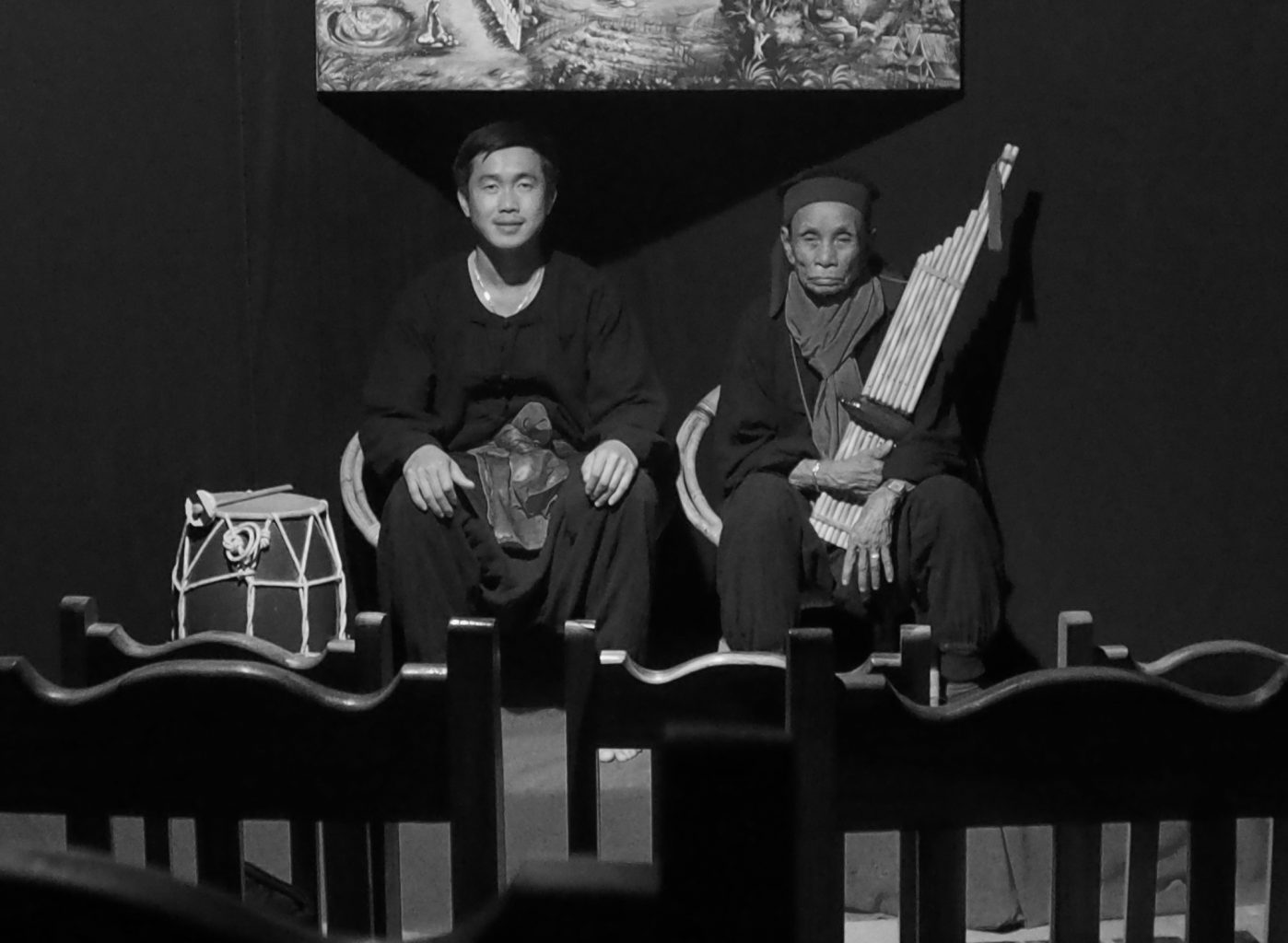 This is a traditional storytelling project in which a selection of local folktales, legends and myths is presented to the pubic by a story teller, who tells the stories in English, while being accompanied live by the khene, a traditional mouth organ made of bamboo. The shows happens daily from 18h30 to 19h30. The different tales tell about the origins of Mount Phousi and the Mekong River, for example. 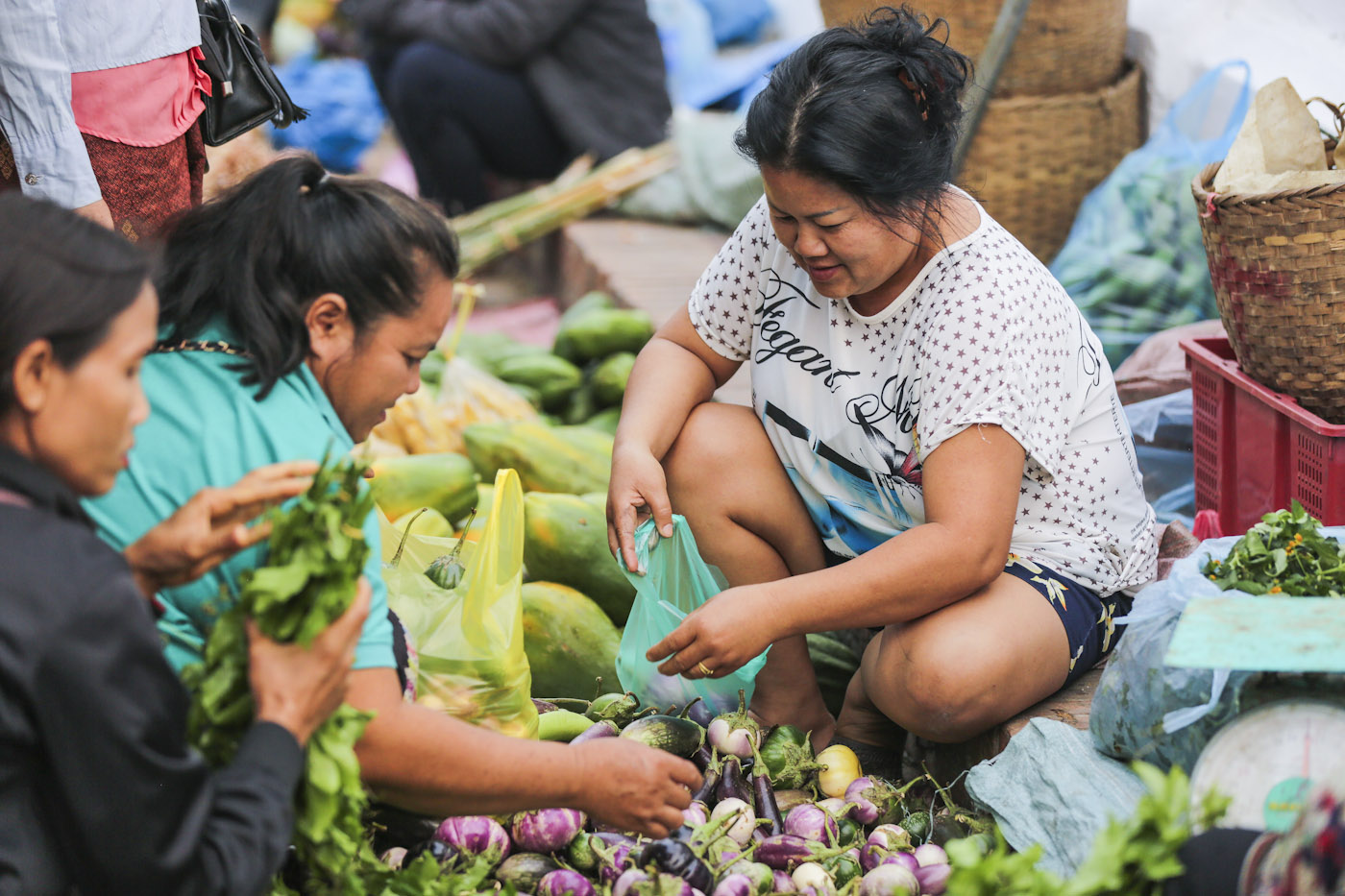 The best time to visit the morning market is the (very) early hours. At this early time the market is at its best and you can witness the frenzy of sellers preparing their fresh products and arranging them on the stalls or on the ground. If you have an opportunity to cook while in Laos, don’t miss the tasty egg plants and the fresh herbs that smell so well.

14. Take Part in the Festivals and Festivities 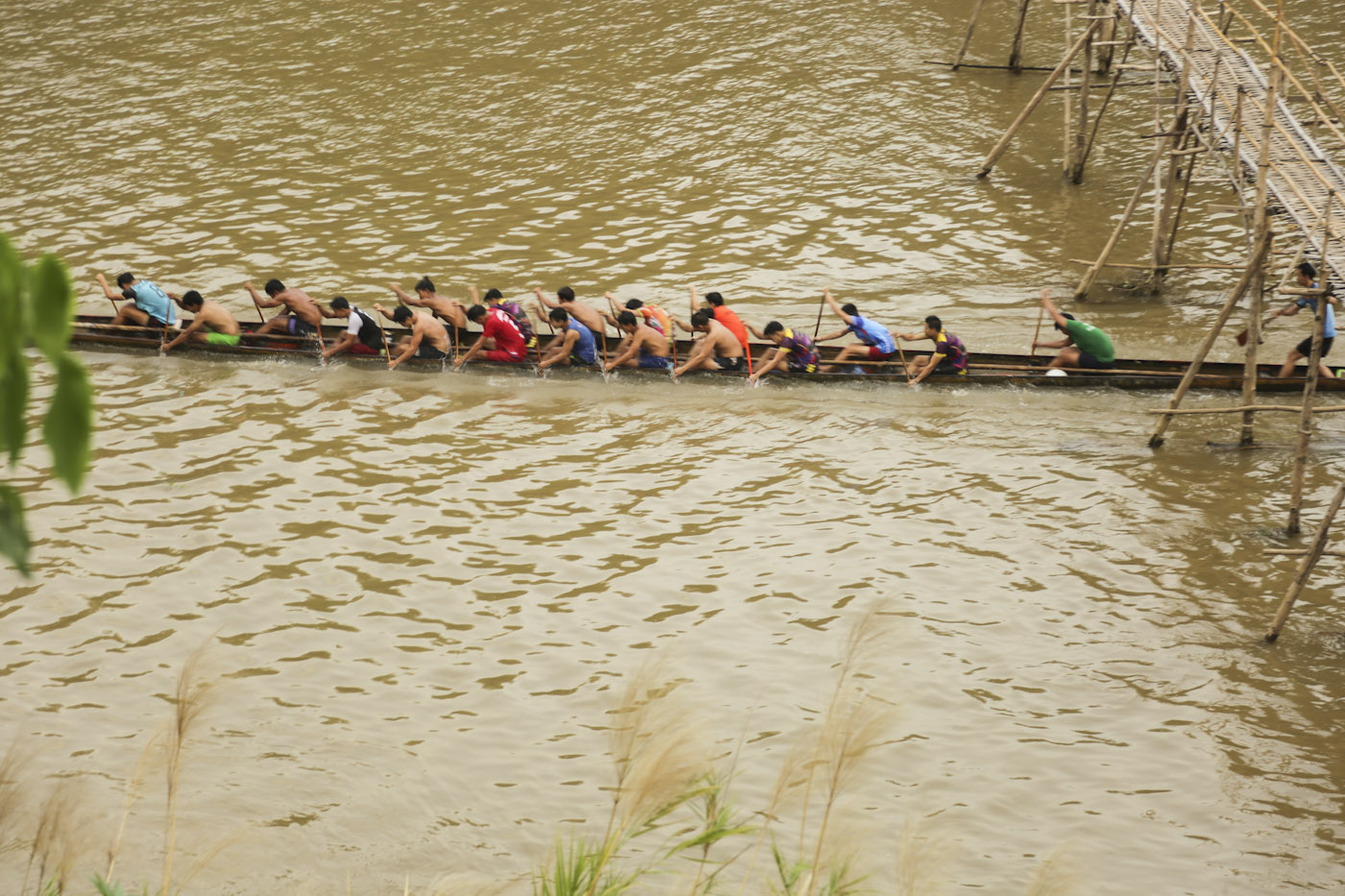 If you are visiting Luang Prabang in August, you should not miss the Boat Racing in the Nam Khan river, which is the first main boat race of the year. Another important celebration is Pimay, the Lao New Year, which is probably the most popular of all celebrations. It happens in April, throughout the country, and Luang Prabang is probably one of the best places to attend it. 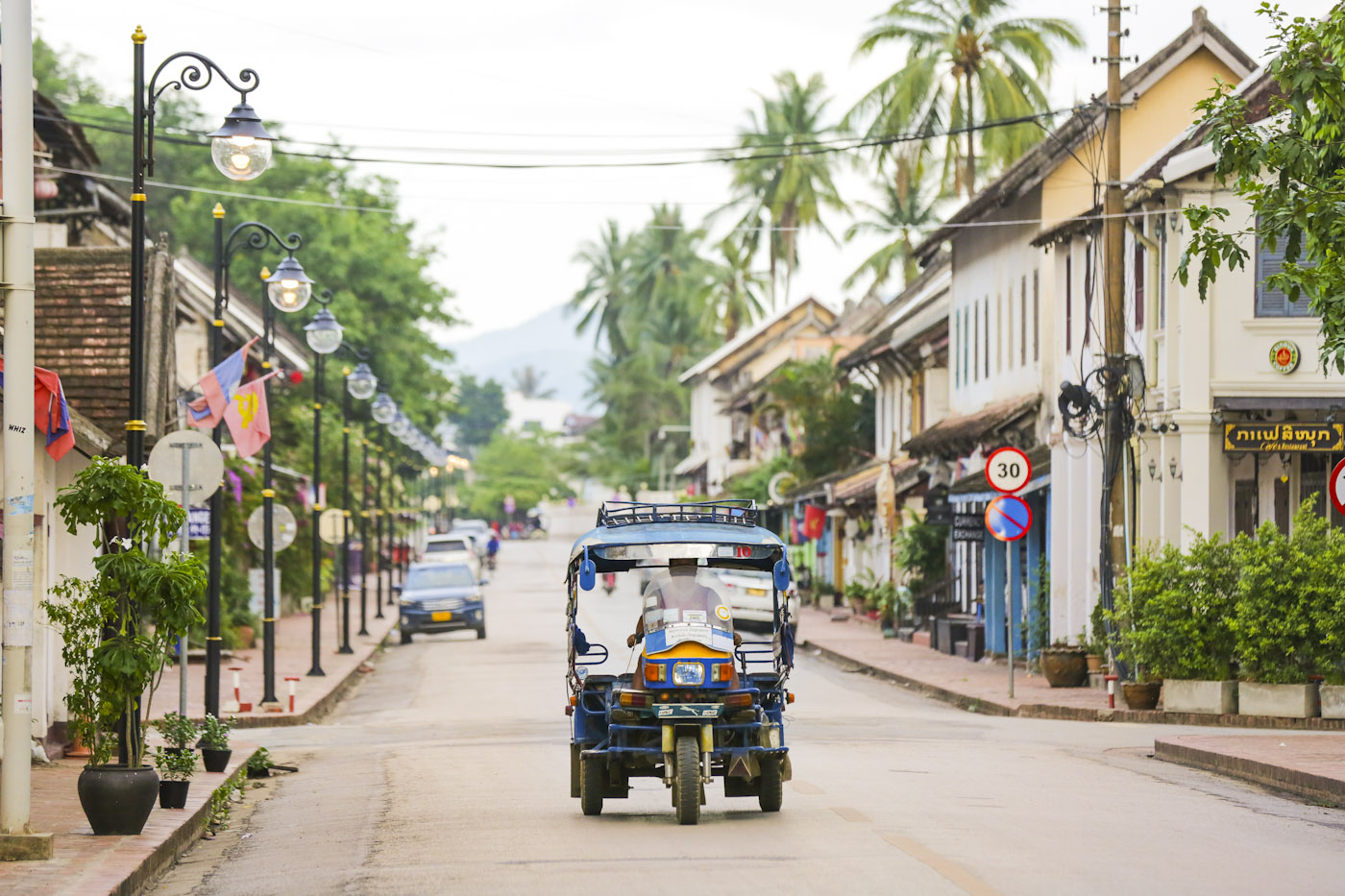 Luang Prabang is a lovely example of a town with plenty of French colonial influences. The two-storey buildings are built in a mix of brick on the first floor and wood on the second floor. The use of stucco and the high ceilings, together with the wide wooden balconies and shuttered louvres completes the picture. 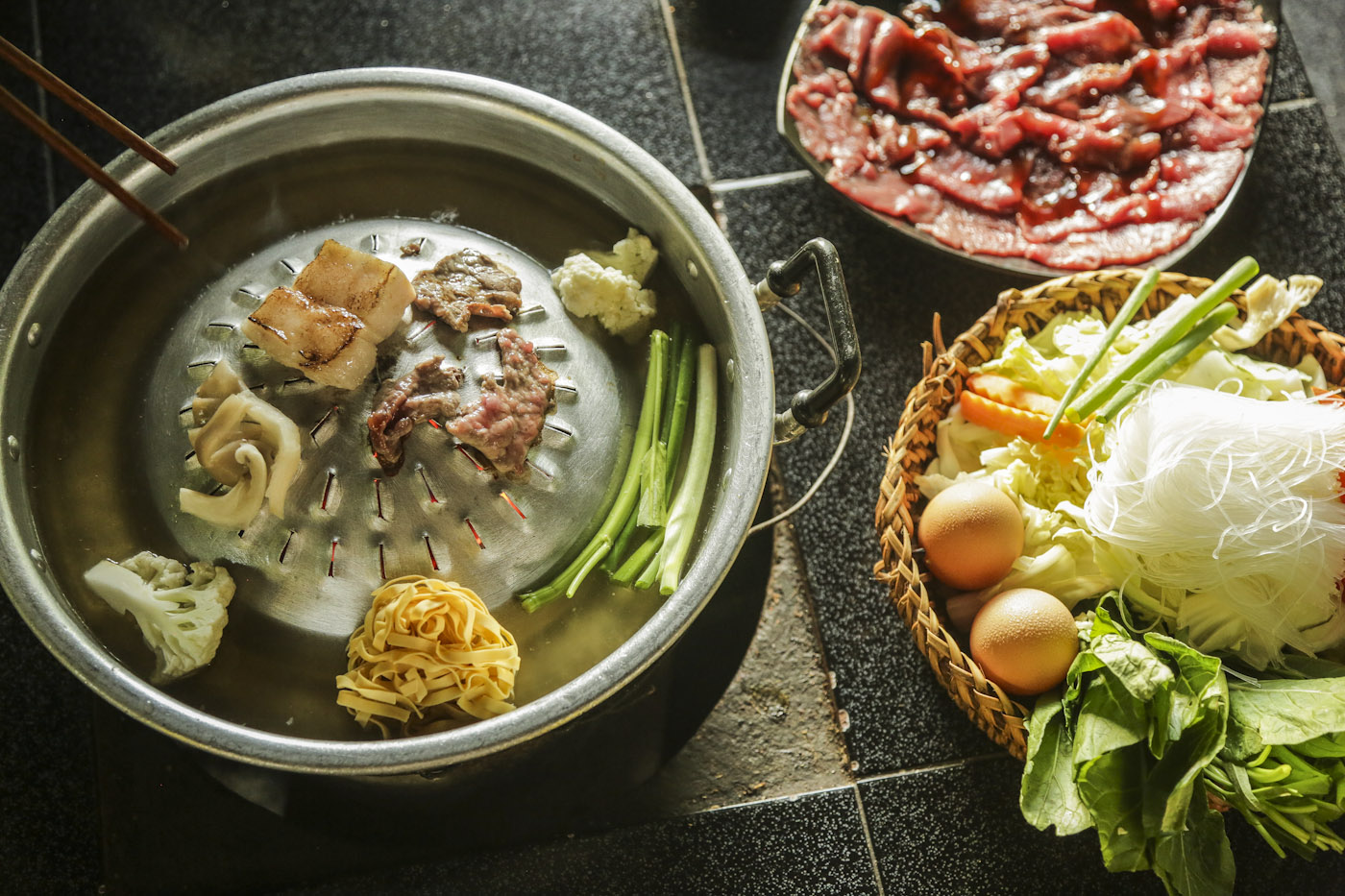 Traditional Lao barbecue is cooked in a traditional pot on the table. Essentially, all the ingredients come raw to the table and you need to do the cooking. While you grill the meat and the mushrooms on top of the pot, there’s also water a compartment for water on the side of the pot, and you cook a kind of soup by dropping in the rest of the ingredients (vegetables and noodles). In the end you can drink the water or not, depending on how filled you are! 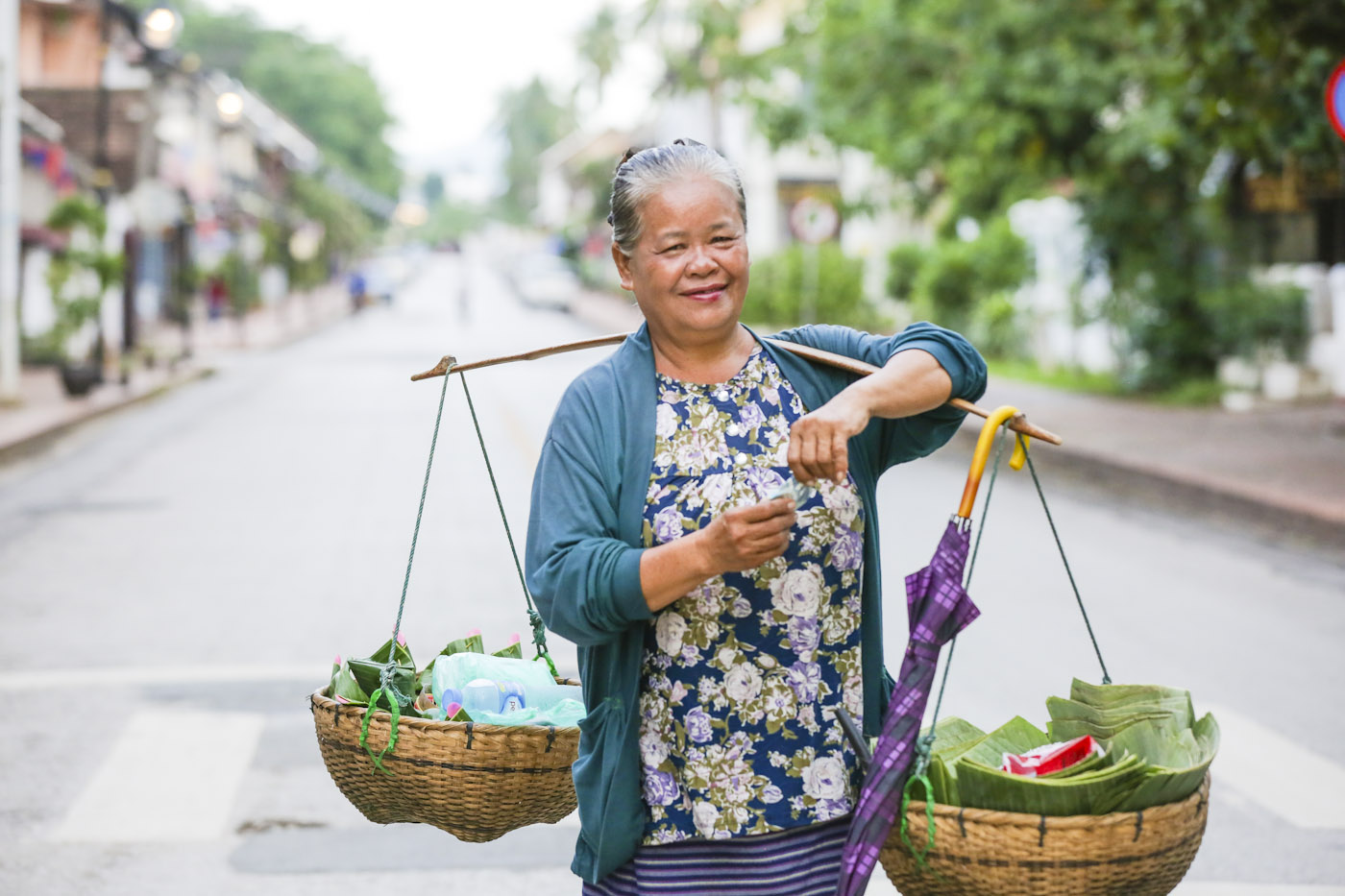 Lao are friendly people and very quick to smile and to attempt a conversation. Those that can speak Lao or Thai will be delighted to engage in conversations. The elder people tend to still know how to speak French (Lao used to be part of the French Indochina during the colonial era), while the younger ones will be delighted to improve their English skills. 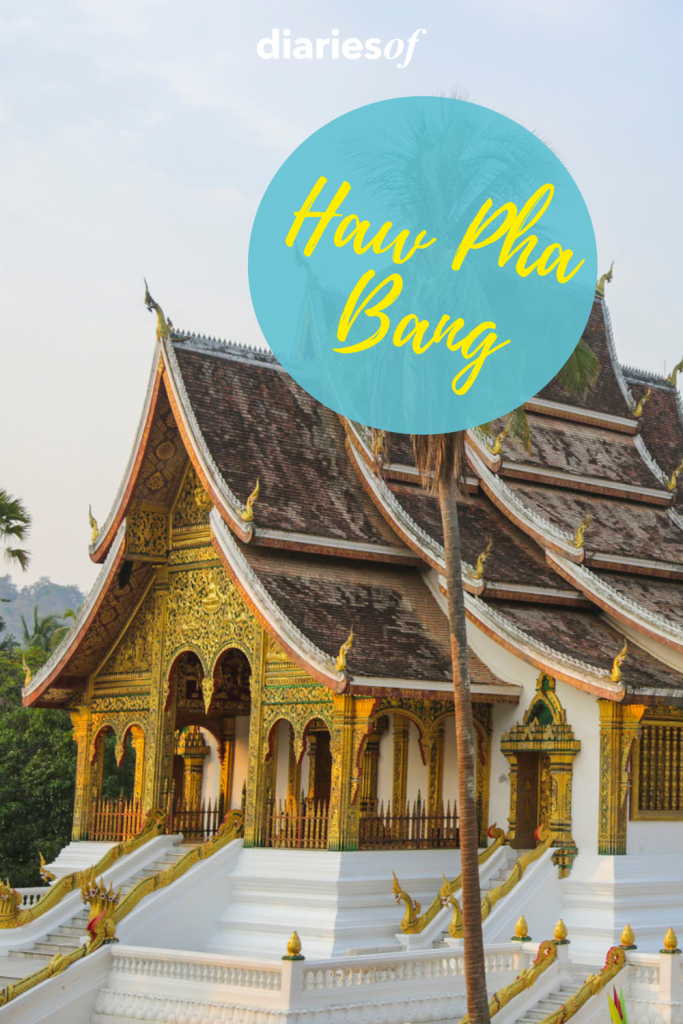 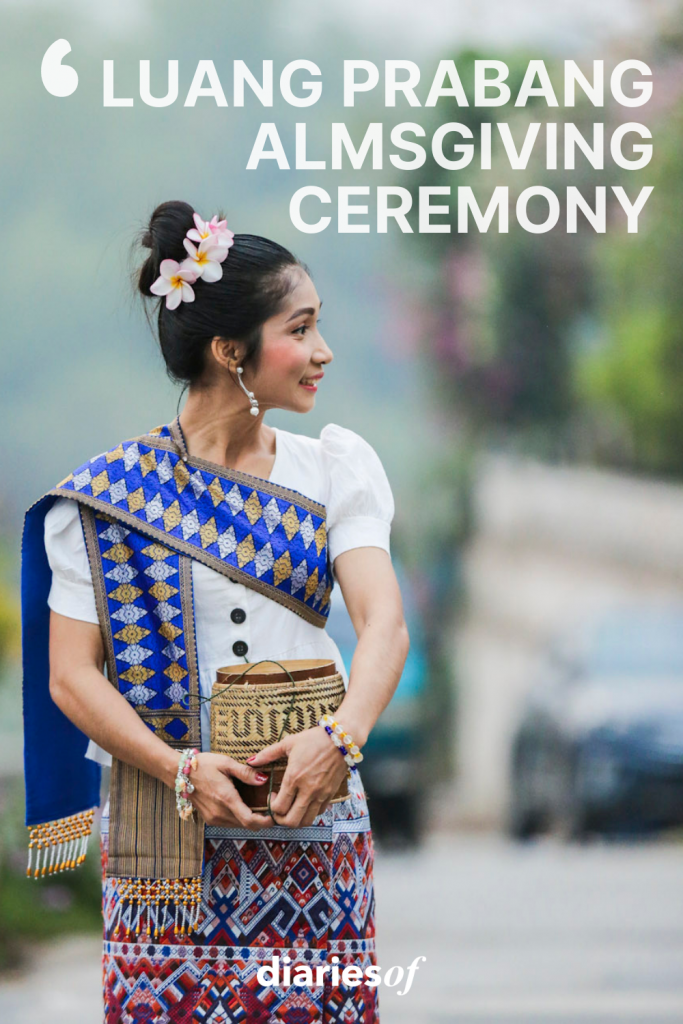 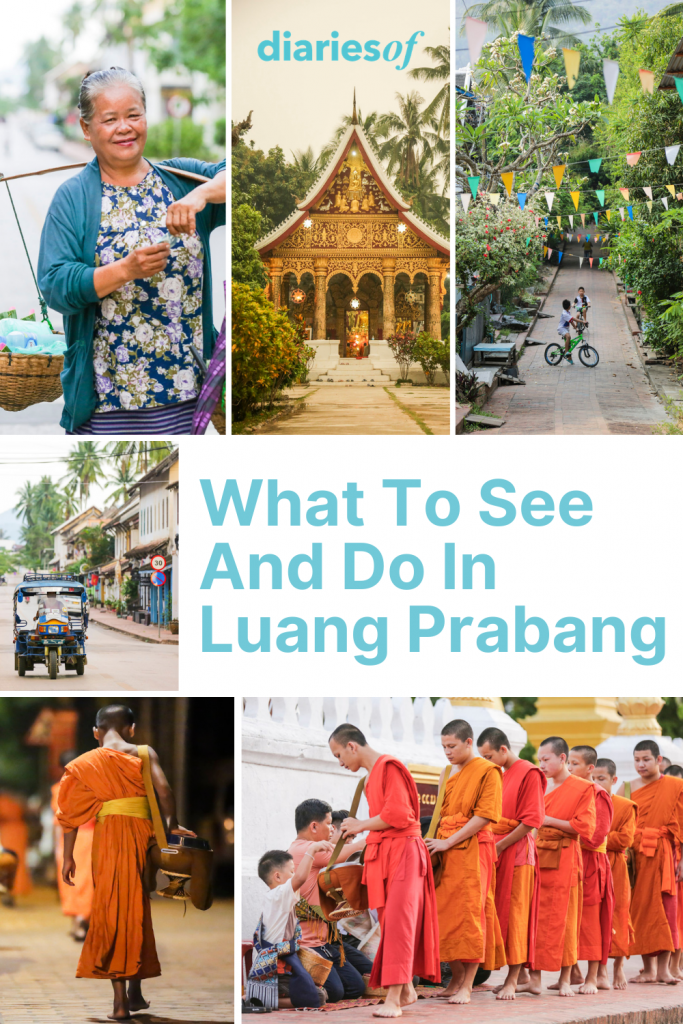