Sailing across the Titicaca Lake

If you ever want to feel some sea wind while being in a mountain area, Titicaca lake can be your destination.

It was here in Copacabana that we caught our first glimpse of the immense Titicaca lake. The lake is well known for being the largest in South America as well as the highest navigable lake in the world – located in the Andes Mountain, at around 3,800 metres above sea level – but we didn’t have the impression of being so high up. Titicaca is also a natural border between Bolivia and Peru and it houses about forty islands. all inhabited by Quechua and Aymara communities. Historically, it is considered the cradle of the Inca civilization. 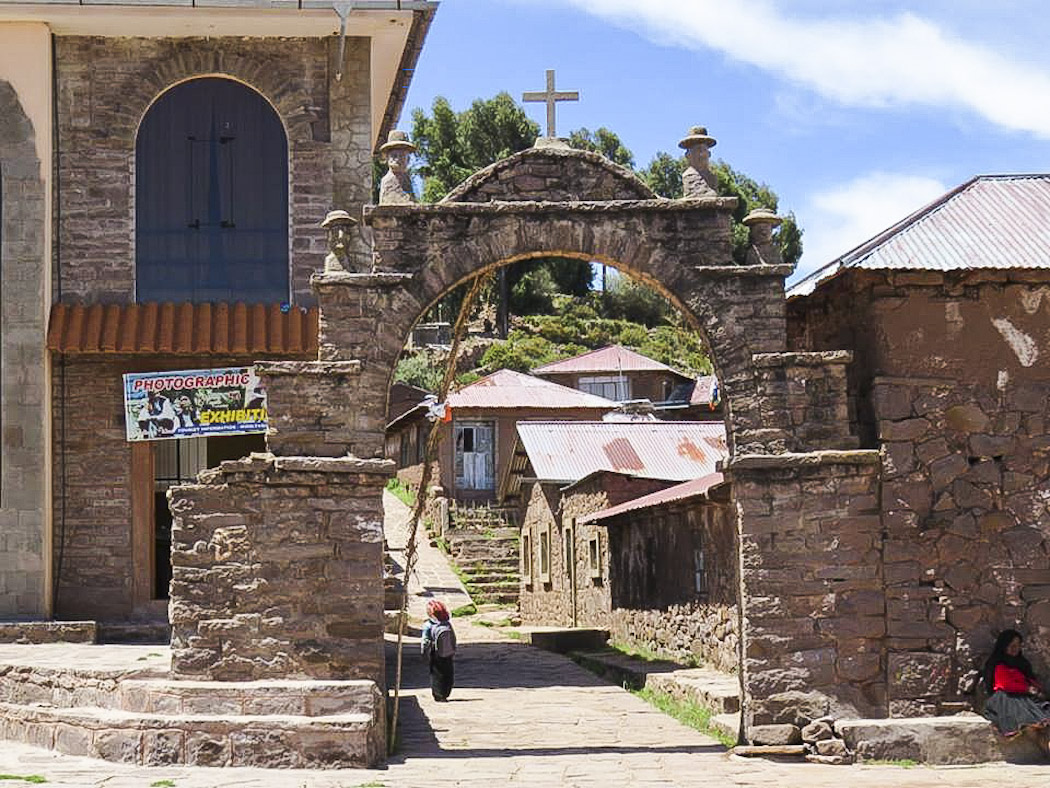 After crossing the border between Bolivia and Peru, the bus dropped us in Puno, a small town on the shore of the lake and one of the main gateways to Peru when arriving from Bolivia. In order to discover the heart of the lake, the life on the islands, we went to the harbour of Puno where David, a local guide, was waiting for us on a boat.

After sailing for about thirty minutes, we arrived at the first of the several islands we were going to visit. Still on the boat, and while approaching the island, we were able to see the inhabitants dressed in very colourful outfits, waving their hands as a welcome sign. The indigenes of this area are the Indian Aymara, who taught us how to say some words in their language: Hello is ‘waliki’ and how are you is ‘kamisalaki’. 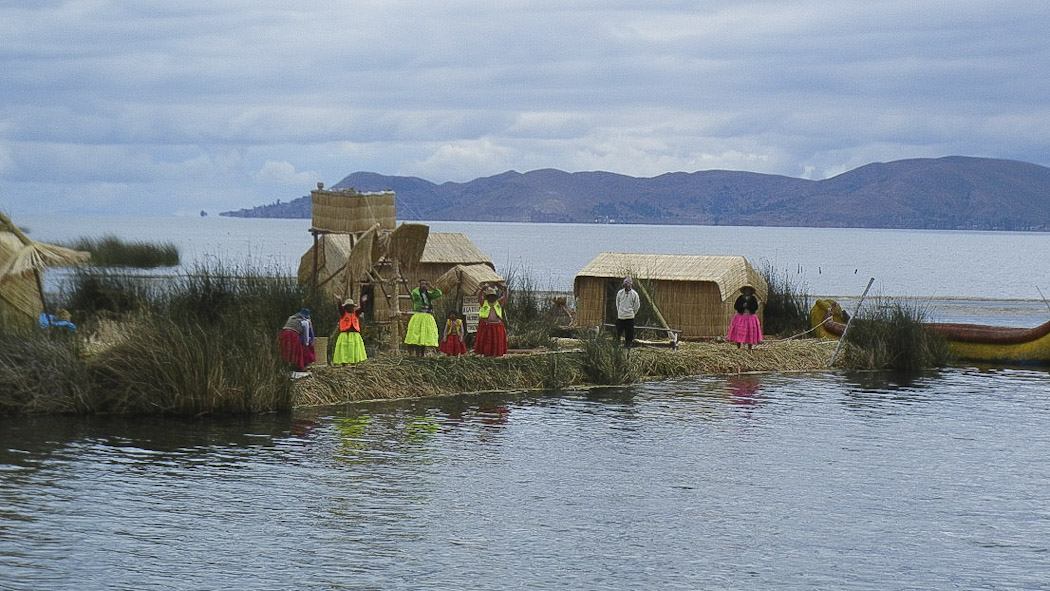 After disembarking on this floating island our host asked us to follow him. The first feeling was awkward as the ground seemed to sink some centimetres with each step before it became steady. We all gathered around the host, curious to listen to his explanations about the island’s history and about the way they are made.

There are 3,500 people currently living on the 42 islands that constitute the archipelago of The Uros (there are four to six families per island).The structure of these islands consists of a first layer of earth followed by different layers of roots and reeds called tortora. They are about 3 metres thick and anchored to eucalyptus trunks which prevent these islands from drifting. 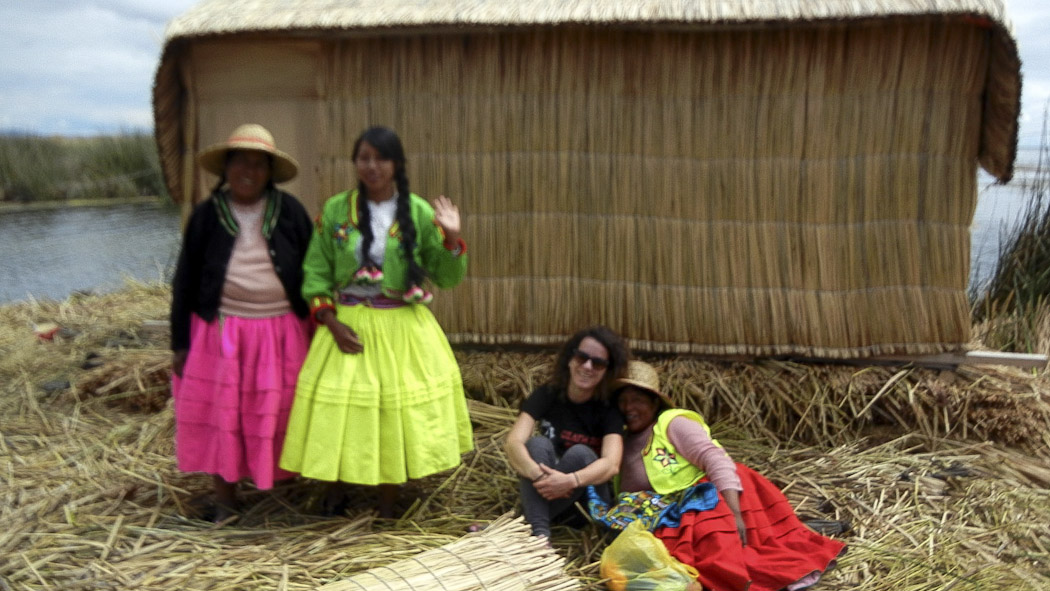 Those that live on the islands fish and raise water hens. Their meals are prepared in small terracotta hearths, which allow the population to make fire and cook food without burning the tortora. Tourism has become an important source of revenue. Women and children were happy to introduce us to their handmade crafts: fabrics, seeds jewels, reeds decoration…

After saying goodbye to the Uros islanders, we went back to the boat and sailed for a few hours to reach the island of Taquile. This is a six-kilometre-long and 1.5 kilometre-wide island with about 2,000 inhabitants. We walked through a lovely stone trail to reach the village situated at 3,900 metres of altitude. The sun was beating down on me and, I have to admit, I was out of breath after a few minutes of walking. 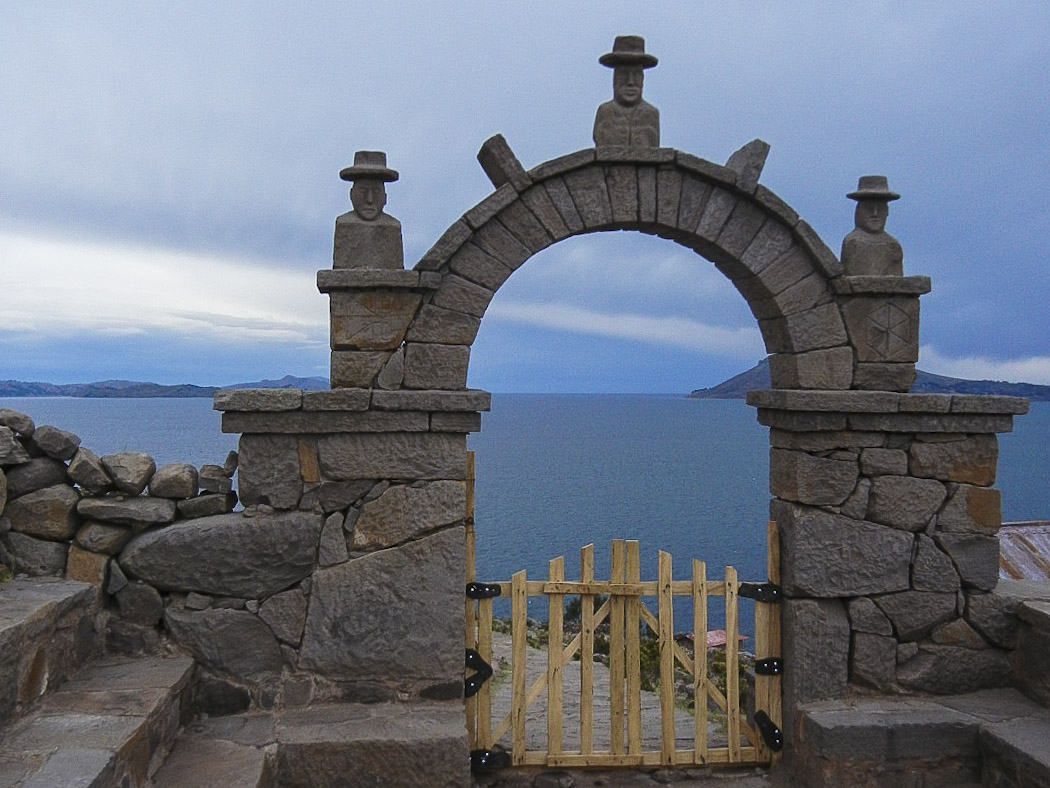 The people of Taquile, and especially men, are famous for their textile art, which has recently been classified as intangible heritage of UNESCO. On the main square of the village, the cooperative where the island’s wooden textiles are sold: hats, berets, bracelets, belts, gloves…

The colours of the clothes worn by the islanders are an indication of their social status and their family situation. Girls in secondary school wear blue skirts, while girls in primary school wear red skirts. Women usually wear three petticoats in everyday life, but during celebrations, they can wear up to fifteen. For men, the red Peruvian-style hat means that they are married; red and white if they are bachelors. Isn’t this useful first-hand information? Maidens wear large black shawls with huge multi-coloured pompoms. 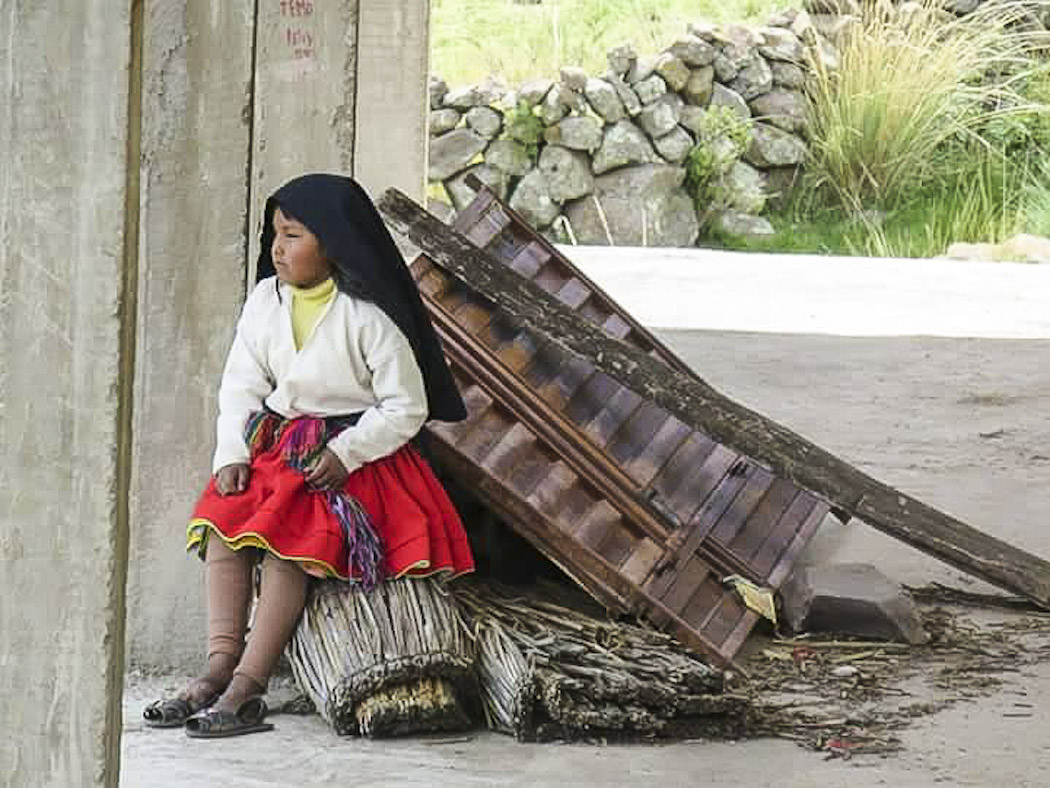 Before getting married, the bride and the groom must live together at least for three years. During this time the couple knits a special belt: one side is made by the groom and the other side by the bride, who embroiders scenes from everyday life. The side of the husband then wraps into the wife’s side, a symbol of protection and commitment.

So much learning had sharpened our appetites! We were invited to the table where lunch was served: a delicious trout, freshly caught in the lake (with french fries, rice and some vegetables) and contemplating the view over Titicaca. So delightful! 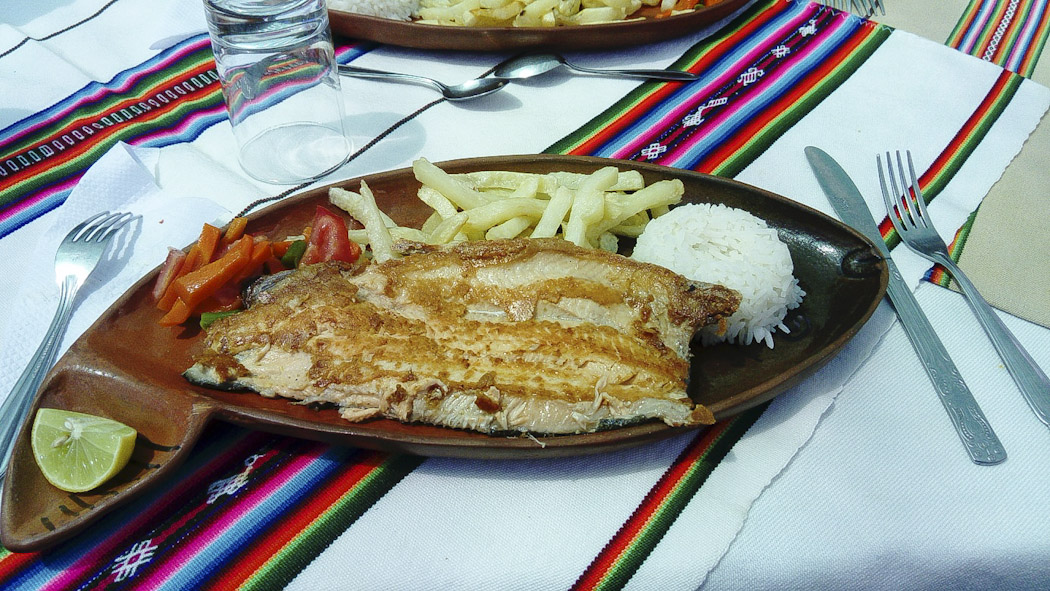 After lunch, we left for Kapachica and the peninsula of Santa Maria, where we were received with necklaces made of small red flowers. We then went for a hike to reach the summit of Karuspata, through the terraces of this landscape. Here we were going to offer our flower necklaces to mother earth. 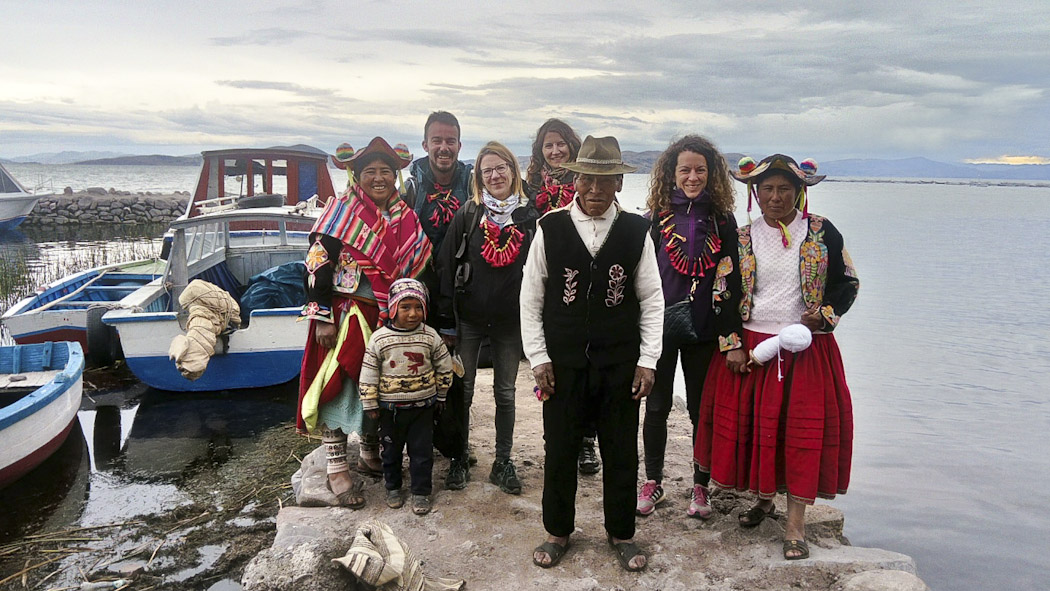 We hanged our necklaces on the wall of a sacred place. In the evening, we were asked to wear the traditional clothes of the island: a petticoat, a cardigan, a square hat and a large black shawl. I felt slightly embarrassed, but at least I felt warm underneath! Perfect for cool evenings… 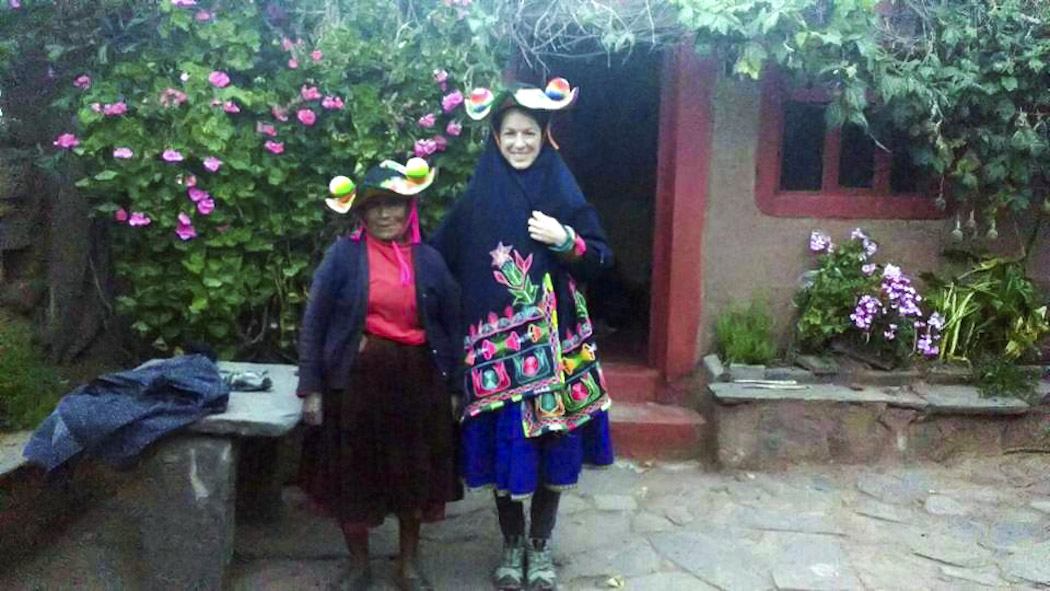 Before dinner we were offered a special aperitif, the famous Pisco Sour prepared with the greatest care by our guide Ernesto. Pisco Sour is the most popular cocktail in Peru, made of Pisco (alcohol), lime, cane sugar, ice cubes and egg whites. It is a unique drink with a very creamy texture and a frothy collar produced by an emulsion of egg whites. We finished the meal with herbal tea made from coca and nuna (a kind of local mint). That night, the sky was dazzled by thousands of stars. It was an intense and magical moment… 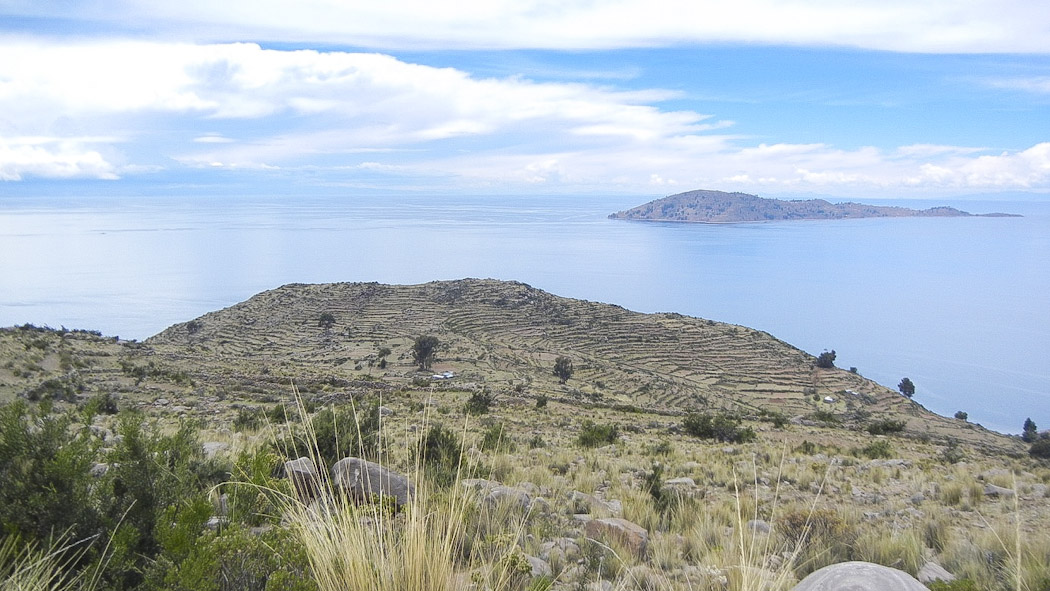 Curious about Peru now? Get inspired by this beautiful country and the Peruvian people and order diariesof Peru now and have it delivered home with free shipping.