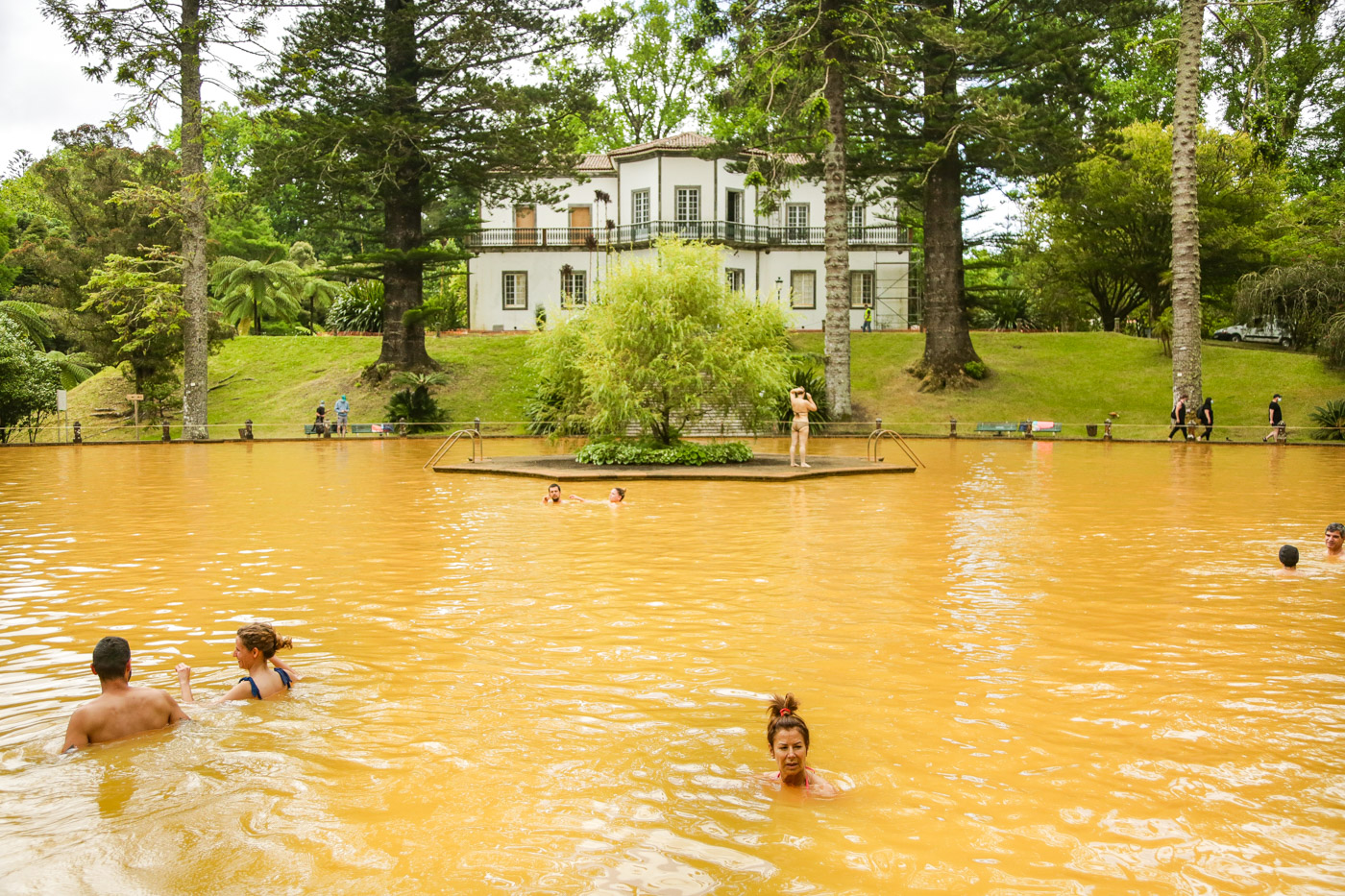 The thermal pools at the Terra Nostra Garden are probably the most famous spa on the island. Don’t make the mistake of going to Terra Nostra just for the spa alone. The garden itself is one of the highlights of the island and one of the most beautiful we have ever seen. 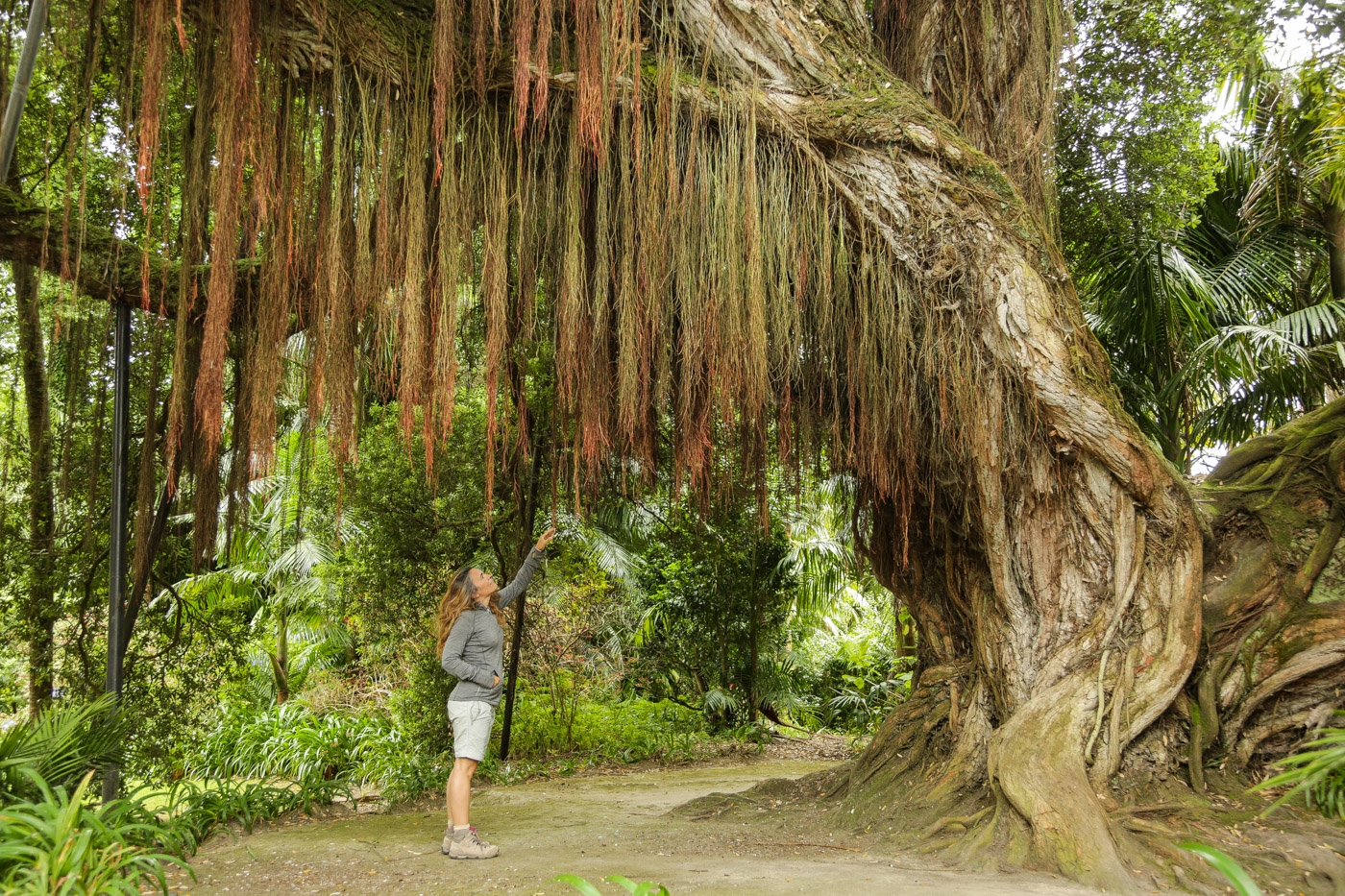 We met Carina, who would guide us through the Terra Nostra Garden, at the entrance to the garden, where an imposing Metrosideros embraces the visitors queuing for tickets to the park. Carina could not be precise about how old this massive tree is, but it is very old. She explained that ‘In the past, there was no rigorous classification of the species in the park; therefore, we do not know the age of some trees. Today, part of my job is to correct that deficiency. I have spent the last five years cataloguing all of the species in the park; around 1,600 different plants, including species, subspecies, varieties and cultivars.’ 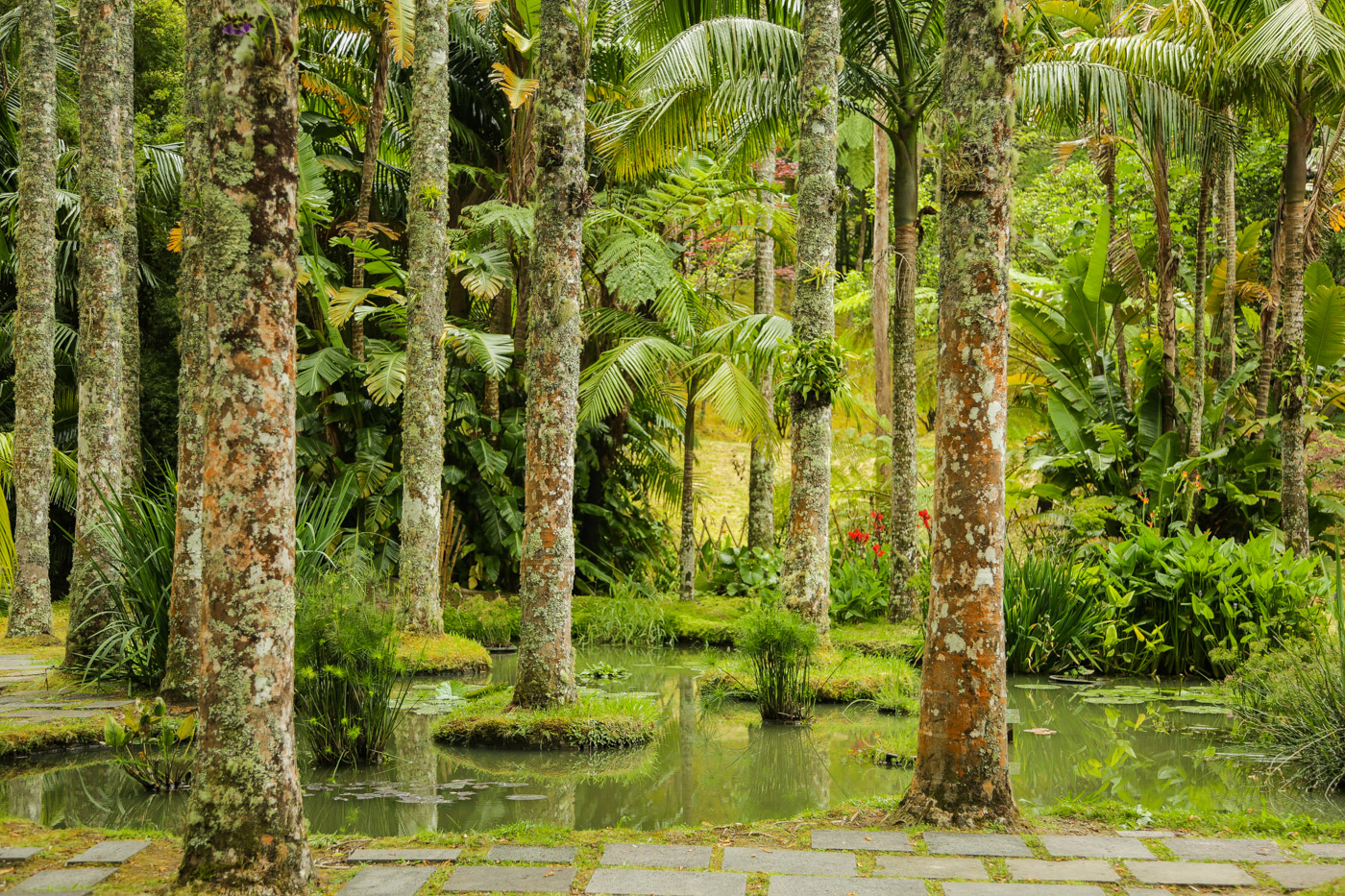 We soon arrived at the park’s monumental pool, where visitors were soaking in its bubbling brown muddy waters. Carina explained that ‘Both in summer and winter, the thermal pools are a favourite amongst the public.’ The park is located in Furnas, a village with a high geothermal activity. Throughout the village there are numerous hot springs, bubbling cauldrons and mud pools. The thermal pool in the park is lined in quarried stone, and is very special, with the beautifully renovated Casa do Parque in its background. 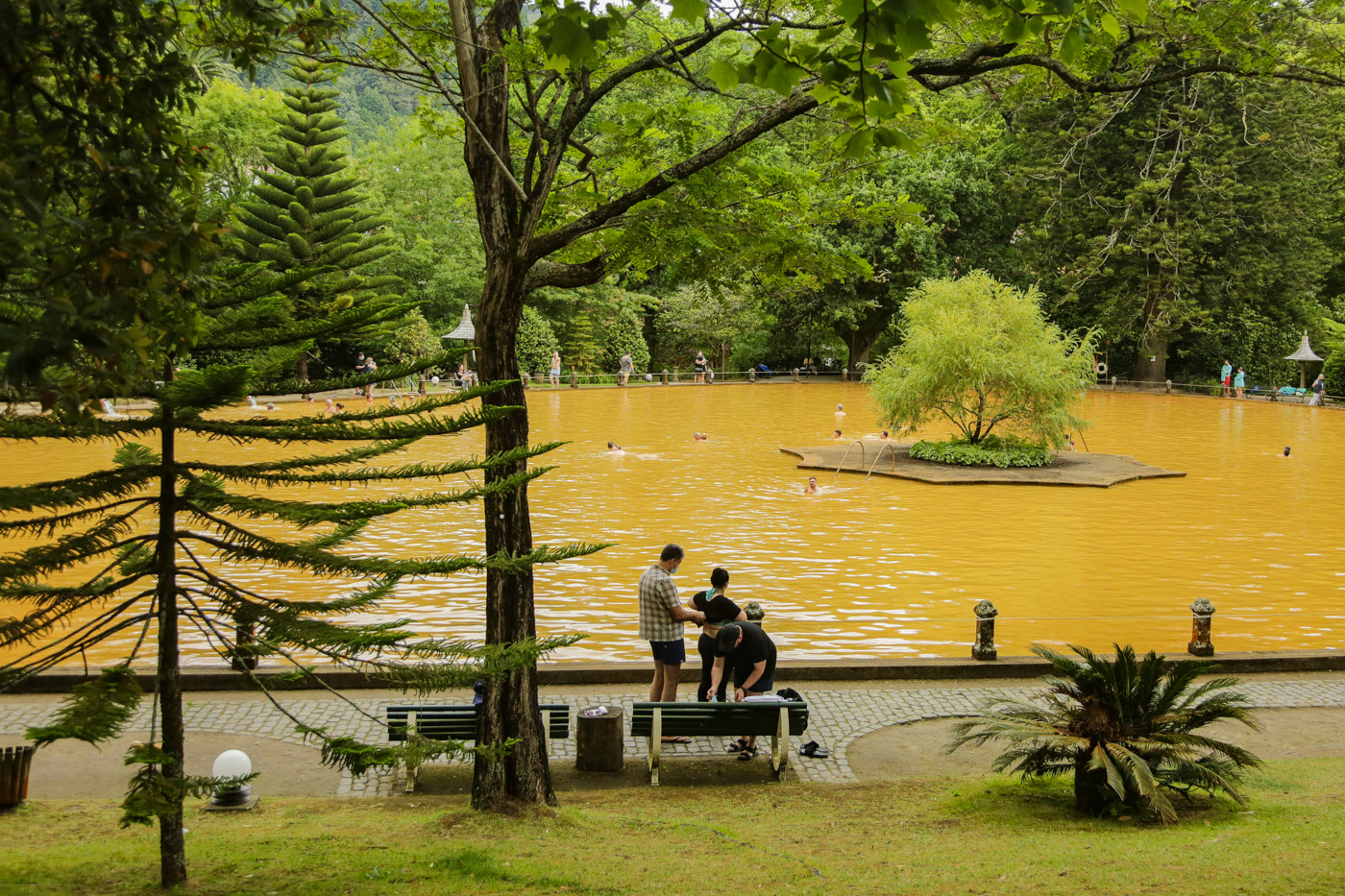 Carina started leading us through the heart of the park, explaining about the history behind this magical place, as we passed along the long Ginkgo Biloba Avenue. ‘The American consul, Thomas Hickling, had the original idea for a holiday house and a park in 1780. Later on, the property passed into the hands of the Viscount of Praia, who expanded it further. In the mid 20th century, the entire property was acquired by the Terra Nostra Company, which was managed by the Bensaude family, who renovated and expanded the park to what it is today’. 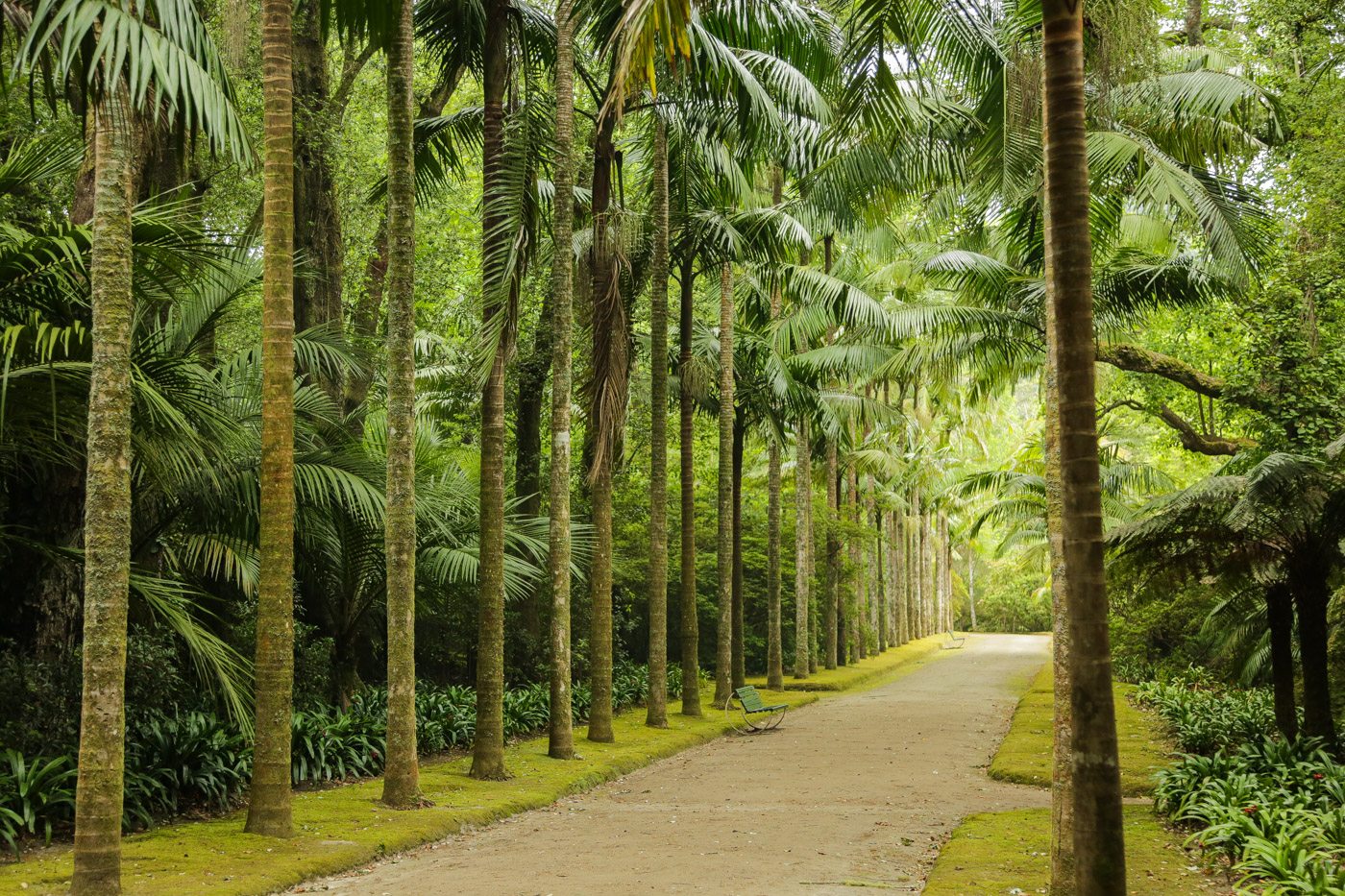 This avenue was so special that we were tempted to stay there for a long time, but Carina quickly convinced us to move on ‘Let me take you to one of the most beautiful corners of this garden’. In the Fern garden, with its nearly 300 different varieties and cultivars, she introduced us to one collection after another. 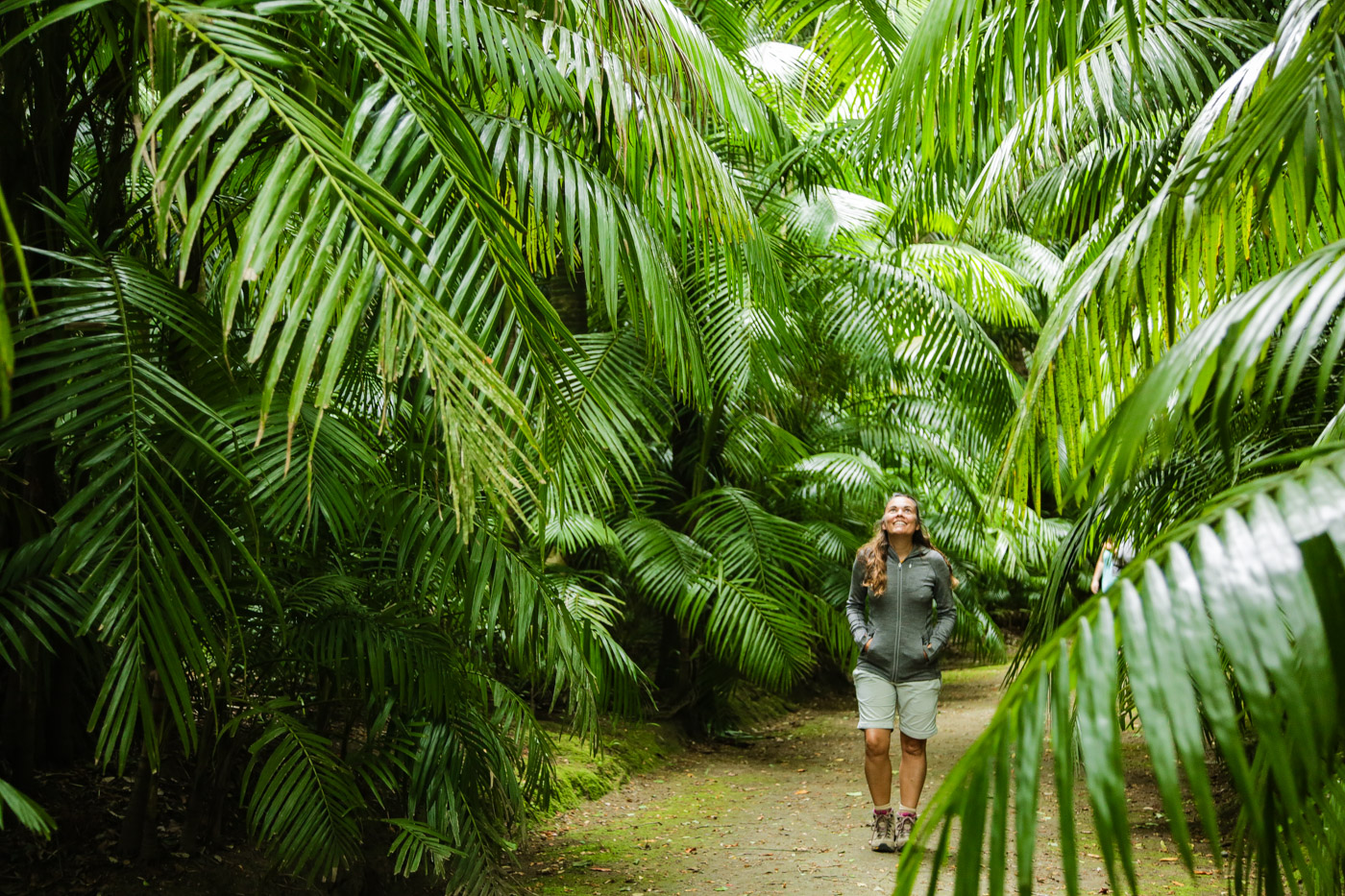 Then we moved on to the cycad collection with 85 different species and sub-species, and probably the biggest collection in Europe. At the next collection we exclaimed ‘Pineapples!’ Carina smiled and corrected us ‘Pineapple is a variety of Bromeliad. We have almost one hundred different bromeliads here. It is rather a young collection, and still in the experimentation phase. The plants are still adapting to the climactic conditions, but we are confident about their future’. 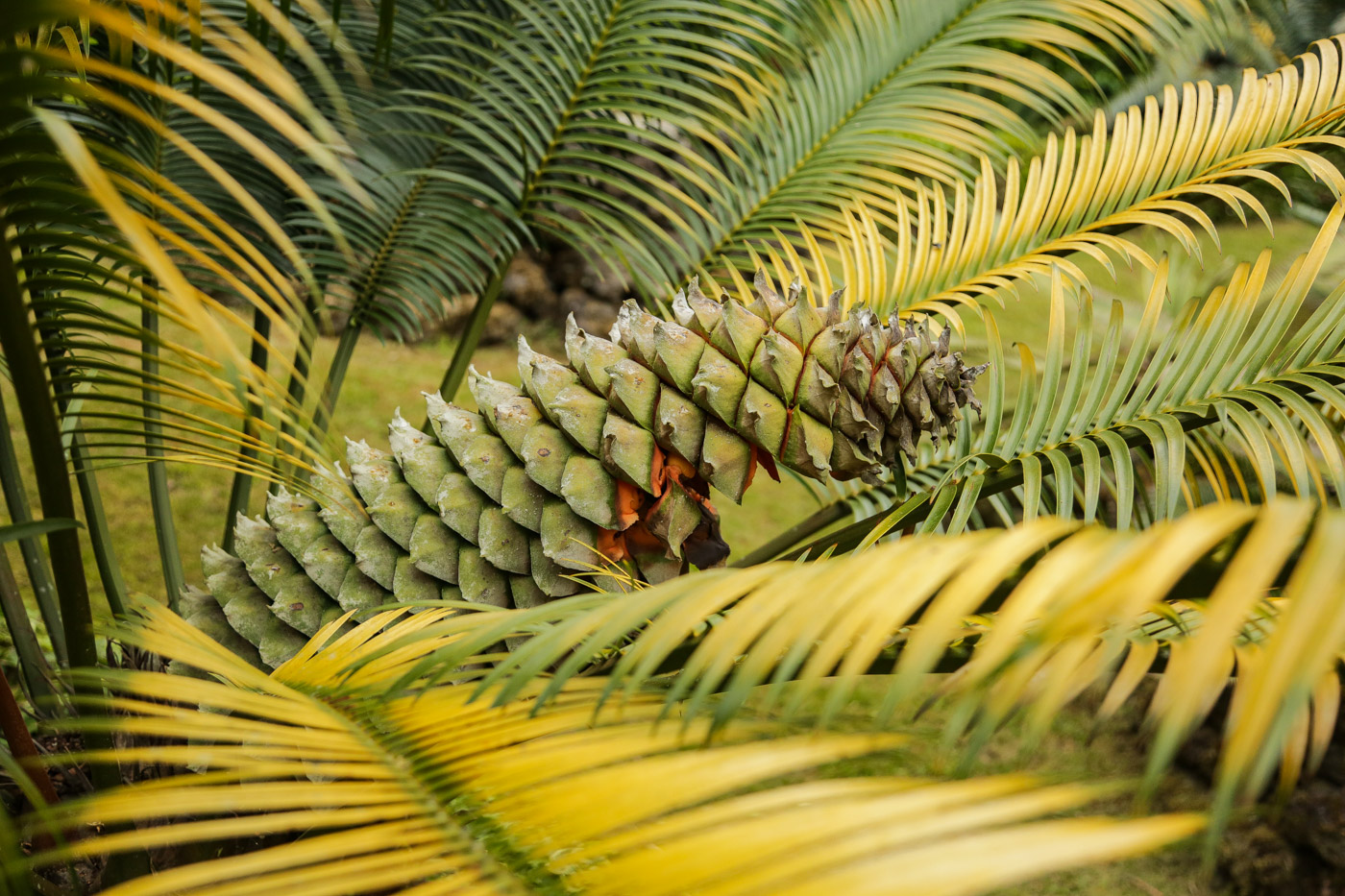 It is such a rich and lush garden, that we – who had mainly gone there with an eye on the pool – ended up spending more time strolling around the park instead of lying in the huge mud coloured pool. Besides the big pool, there are another two hot springs in a more reserved area, with a feel of Japanese onsen – small for intimacy and surrounded by green plants. They are definitely a more romantic alternative to the big pool. 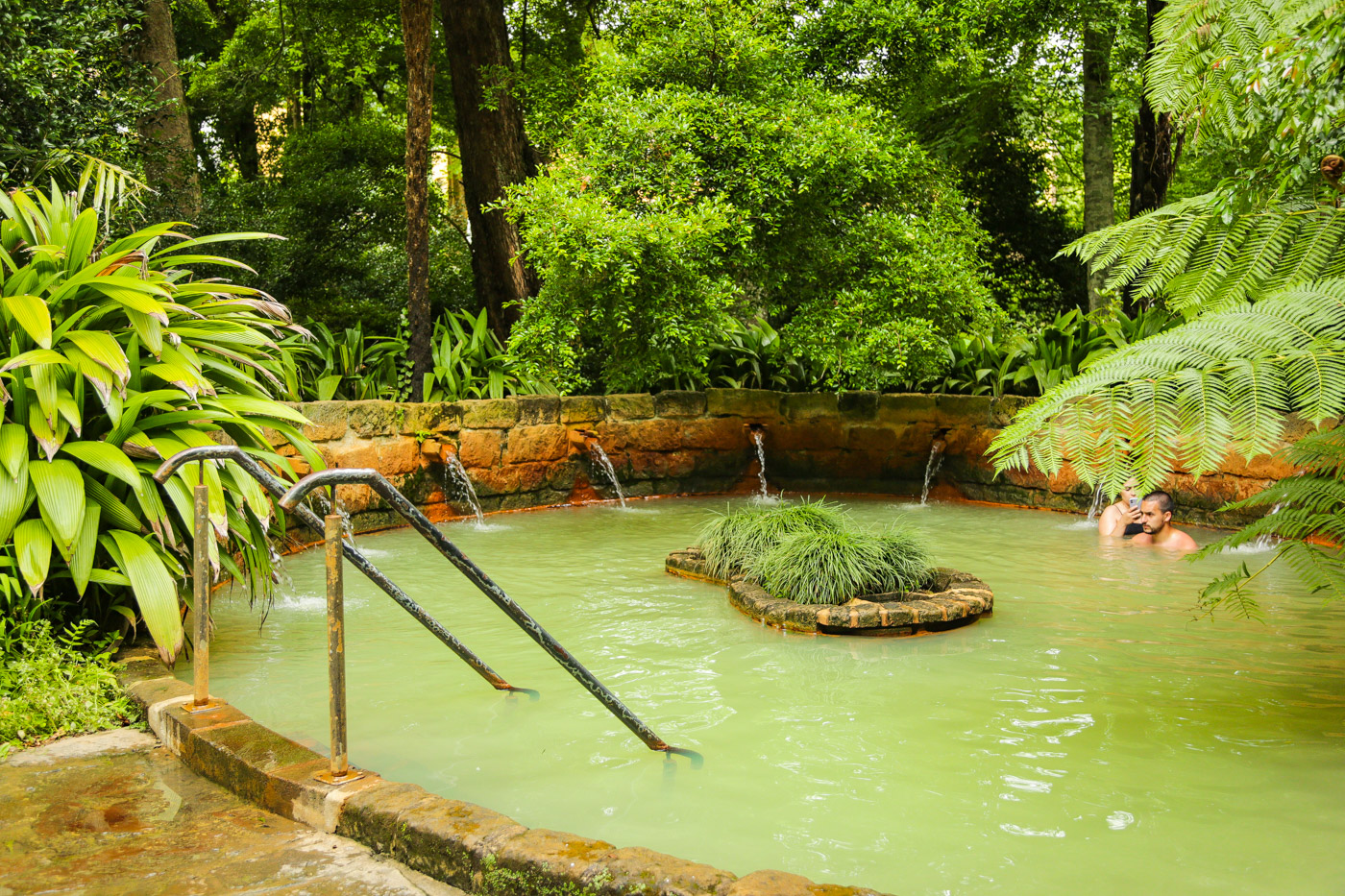 Without our noticing, two hours had already passed, and we were in no hurry to leave this garden. Carina kept enticing us to continue discovering the many species in the park. 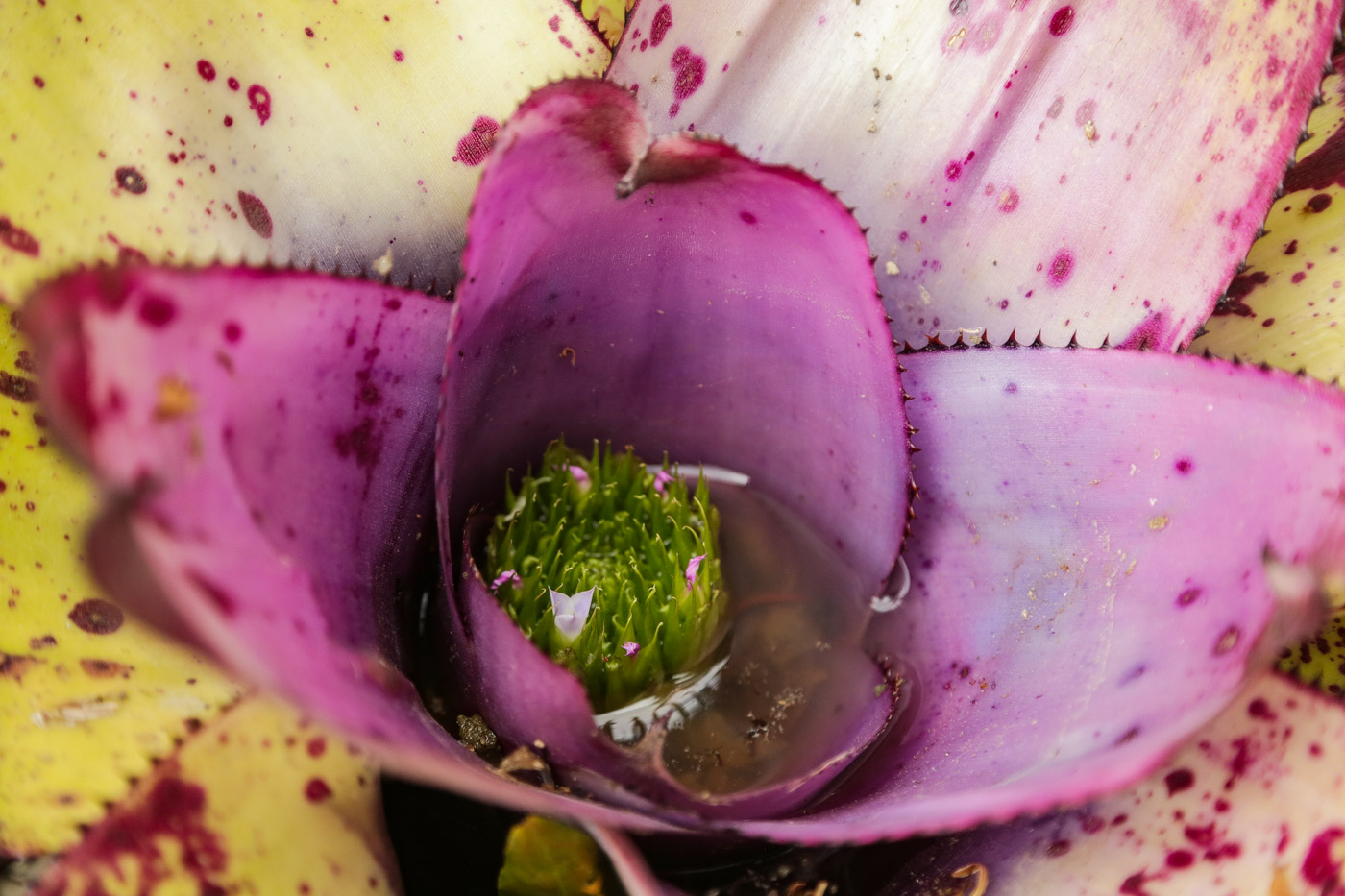 She had left one of her own creations until last; a new garden dedicated to the endemic and native plants of the Azores. Here we recognised some of the plants we had seen around the Azores, such as Azorean heather, Azores laurel and the Azorean blueberry. 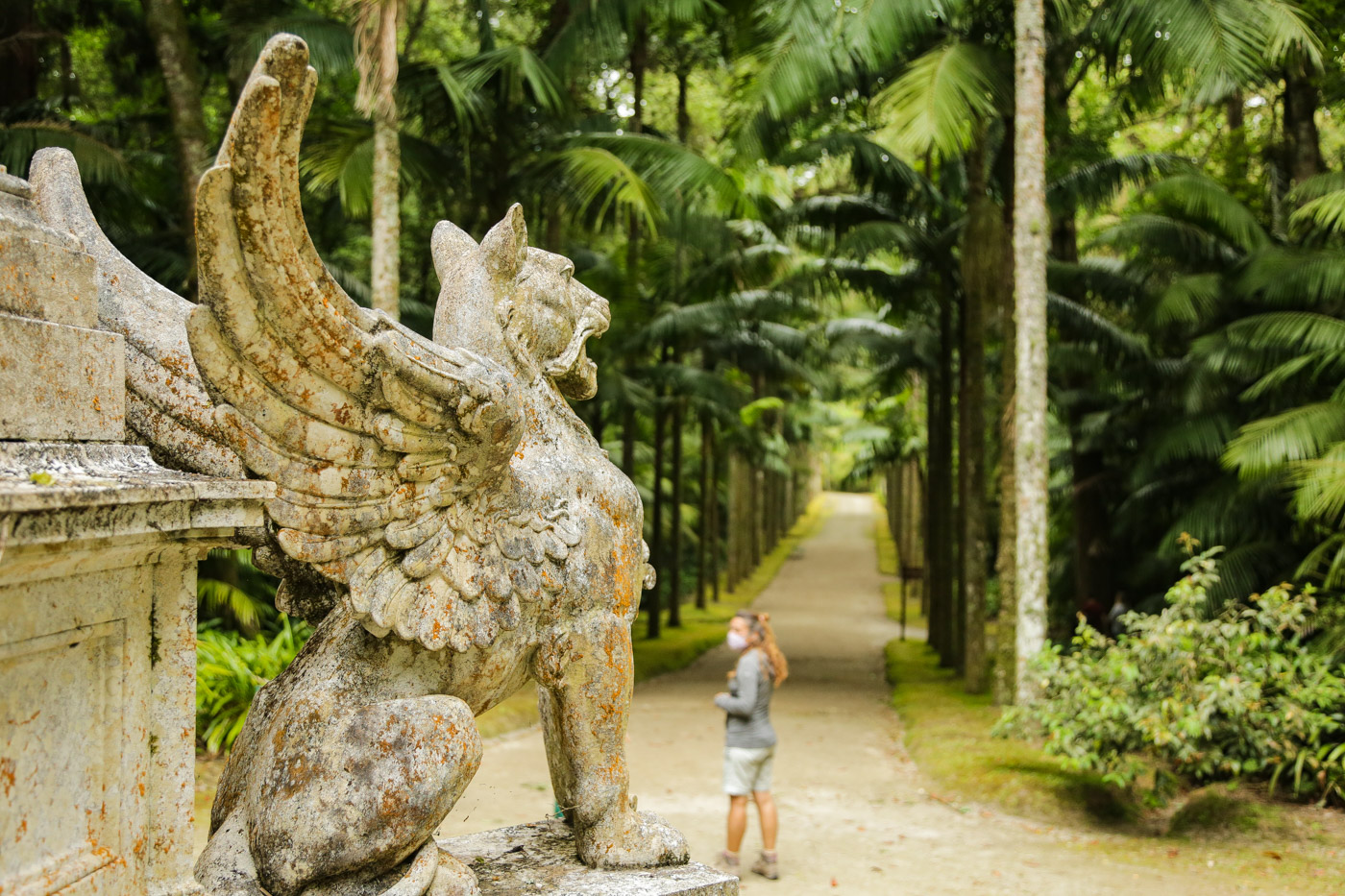 Soon we were in the Camellia collection, a special corner for Carina as she recalls ‘As a child I remember seeing my father taking care of the camellias. Ours is a very large collection, with more than 600 species and cultivars. Because of them, the International Camellia Society has granted Terra Nostra the title ‘Garden of Excellence’. We even have an old Chinese variety of the Camellia japonica which was considered to be extinct’. 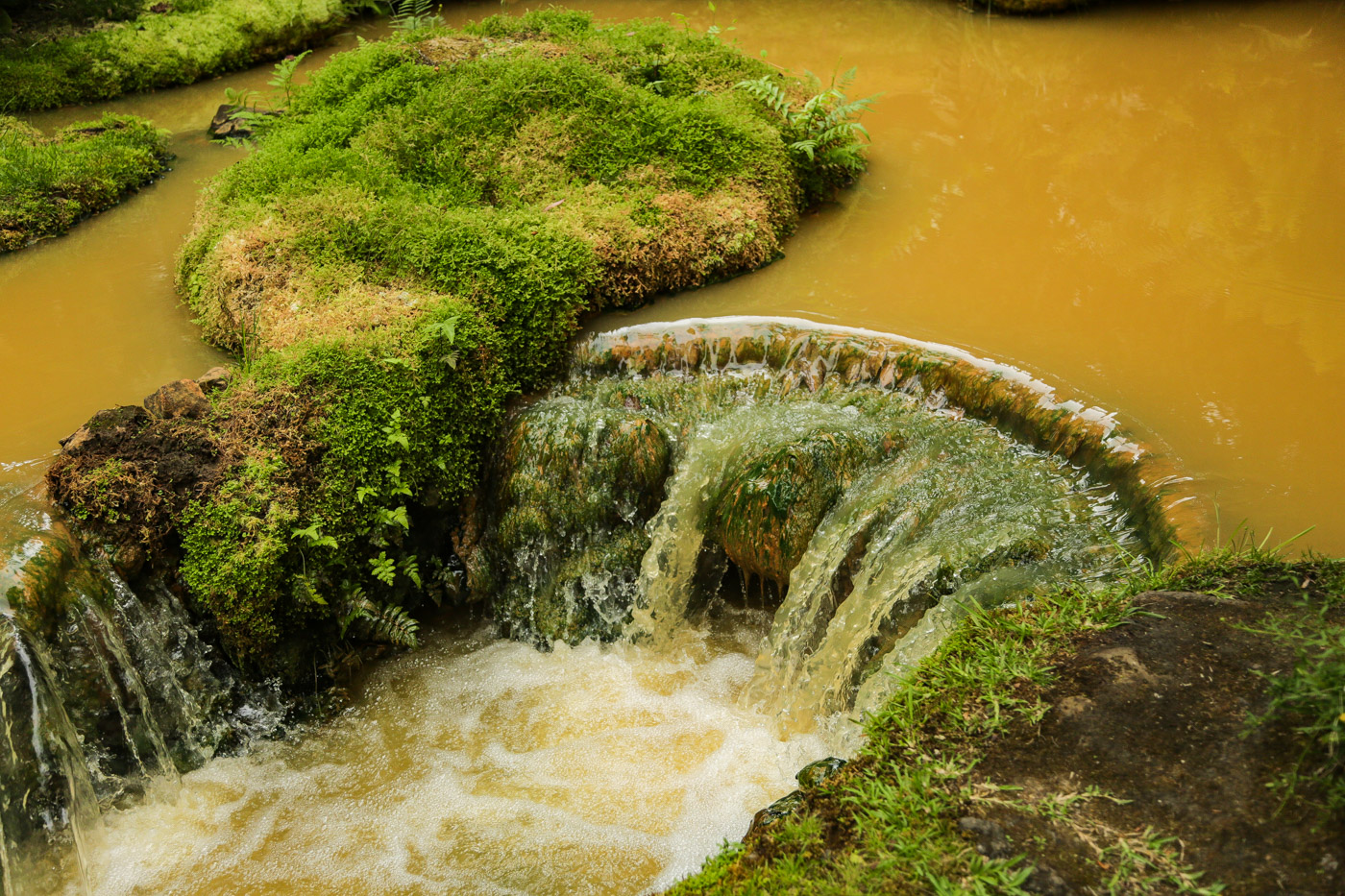 We were thrilled by the jaw-dropping beauty of this Eden-like garden and thanked Carina for having shared so much with us. Carina had a happy childhood in this garden, surrounded by plants and flowers, and as a child she had not expected, nor dreamt, that this garden would become her office when she grew up. But now, she cannot imagine working elsewhere.

And find out more about the other islands: