In terms of popularity not comparable to the Olympic Games or the World Cup, yet the third edition of the World Nomad Games has caught the attention of a broad audience made up of hundreds of thousands of people.

What exactly are the World Nomad Games?

The World Nomad Games (WNG) is an international sporting event that brings together athletes from all over the world, following the same model of the Olympic games. The main difference is that, as the name says, the WNG features traditional sports that are practised by nomad tribes, particularly the ones from Central Asia. This fact does not prevent countries with an insignificant history of nomadism to take part in these games, and for this reason, we find the USA and many European countries (such as Germany, Belgium or France, to name just a few) participating in this huge event.

The origins of the Games

The first edition of the World Nomad Games took place in 2014, with the idea to create an international competition, where peoples from all over the world could challenge each other in the scope of a sports competition, instead of challenging each other in a battlefield. For this reason, the games’ motto has been ‘United in Strength, United in Spirit‘, reflecting this ideology. The games have ever since been organised under the patronage of UNESCO and take place every second year.

From the first event to the latter one, which has taken place from 2 to 8 September (2018), in the small settlement of Cholpon-Ata (on the northern coast of the famous Issyk-Kul lake, in Kyrgyzstan), the number of participants has more than tripled. The numbers are indicative of the success and the dimension that the event achieved: 82 countries competing and more than 2,000 athletes taking part in 37 different sports events.

That the nomadic games originated in Kyrgyzstan is not surprising, given the great heritage and tradition of nomadic life and culture in a country that has been connecting the Eastern and Western civilisations through the Great Silk Road for at least two millennia. These games are Kyrgyzstan’s largest international project to promote and sustain its nomadic civilisation, and culture especially its ethno-sports and its ethno-culture. Such a successful event is also bringing Kyrgyzstan to the limelight. 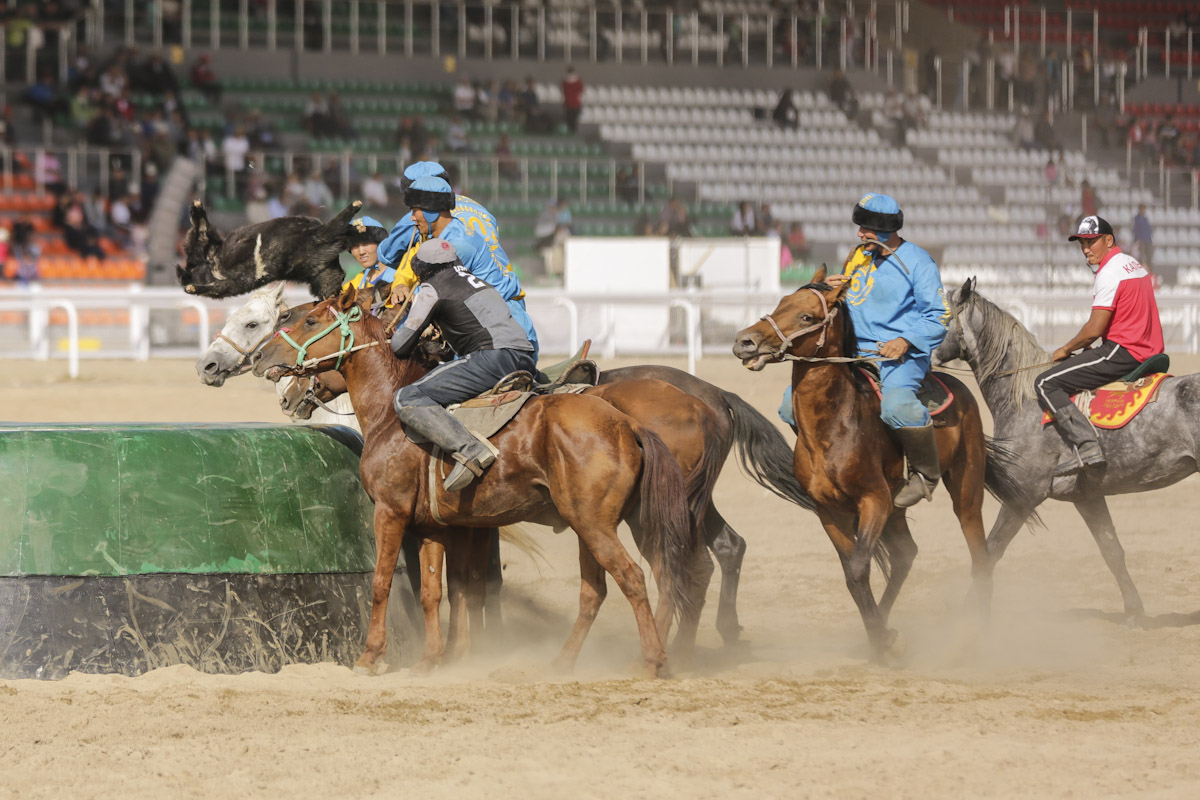 Of all the events on the contest, the most popular game is the Kok-Boru. This is considered Kyrgyzstan’s national sport, and as such, the Kyrgyz team is considered the best in the world. During three periods of 20 minutes each, four mounted riders from two teams, try to grab the carcass of a goat from the ground to score a ‘goal’ by placing it in their opponent’s goal (the Tay Kazan). Since the whole action takes place on horseback, Kok-Boru is often compared with polo. Despite the obvious differences (there are mallets and balls in polo), the comparison is not so disparate, and many believe that modern polo originated from Kok-Boru.

For those that are not accustomed to the game, the first impression is remarkable: both players and horses are pushed to their limits. It is a very engaging sport, registered in the UNESCO list of the Intangible Cultural Heritage of Humanity since 2017. We did worry about the safety of both players and horses, but soon got the feeling that the horses were enjoying the game as much as their riders. As one of the players told us ‘Kyrgyz horses are very strong, graciously manoeuvrable and totally submissive to their riders. They understand this is a game and we pass to them both the euphoria and the tension of the game’. In the final match, Kyrgyzstan surprisingly met Uzbekistan. Kazakhstan did not make it to the final this time, but the rumour has it that they did not bring the team’s best players. This did not seem to bother the audience, and every action of the home team rose a cheerful mood in the crowded hippodrome. Foreign visitors were reassured by the voice on the loudspeaker who felt the need to repeat in English that the safety of both players and horses were not at stake. The final match ended as expected, with Kyrgyzstan beating Uzbekistan with an astonishing 32-9 result!

Horseback Wrestling – or the Er Enish 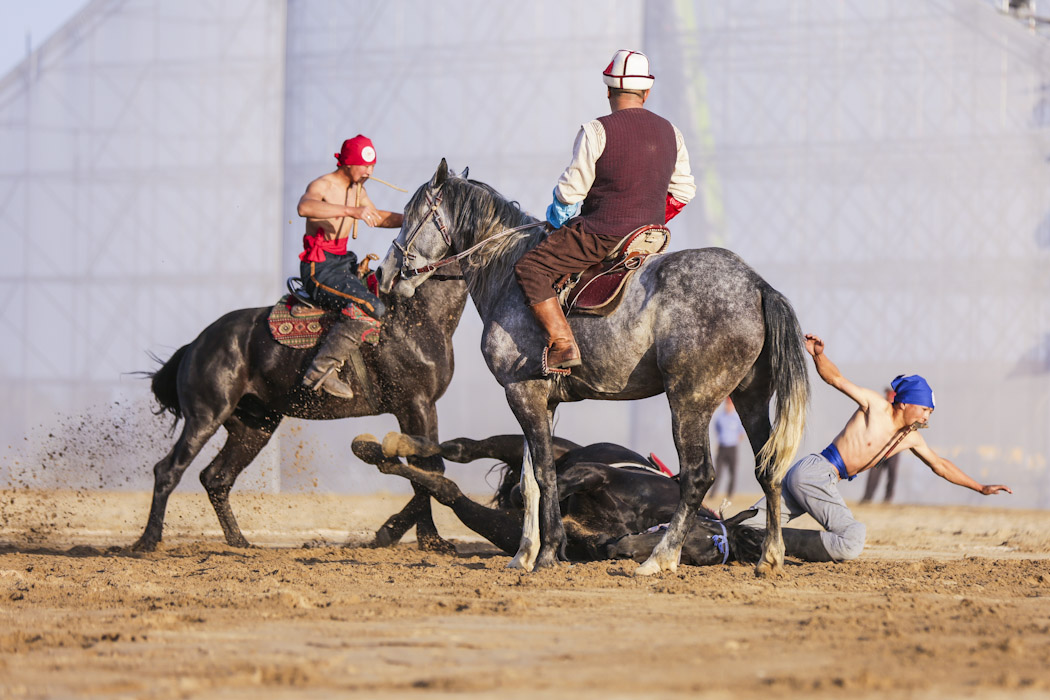 When you watch the Kyrgyz horse-riding, you realise that these boys and girls were born on horses, so smooth and fluid and controlled, they look on them. Many other sports on the WNG are practised on horseback. Besides the horse wrestling called Er Enish (in which two competitors fight on horseback with the aim to bring the opponent to the ground). 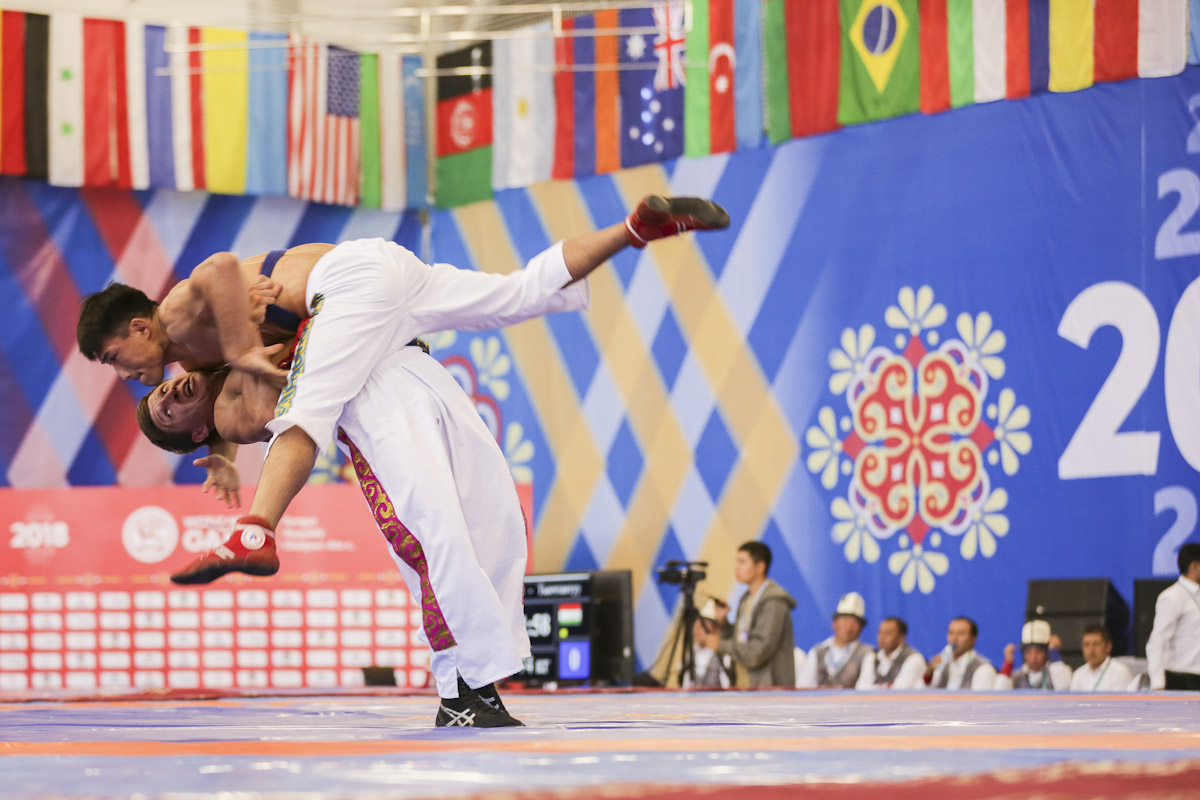 Different kinds of wrestling were also present in the games, and many countries had a significant number of athletes participating in them. 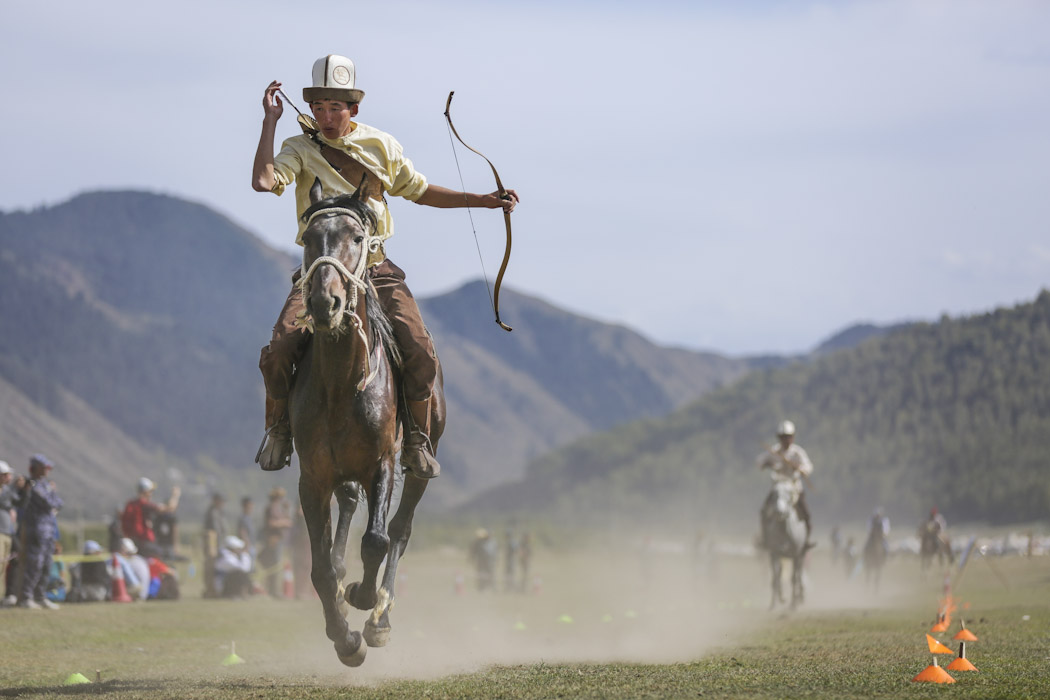 There are other less brutal and more appealing sports, such as archery on horseback, with all participants using traditional wooden arches and dressed in typical clothes. There were modalities for men and women. 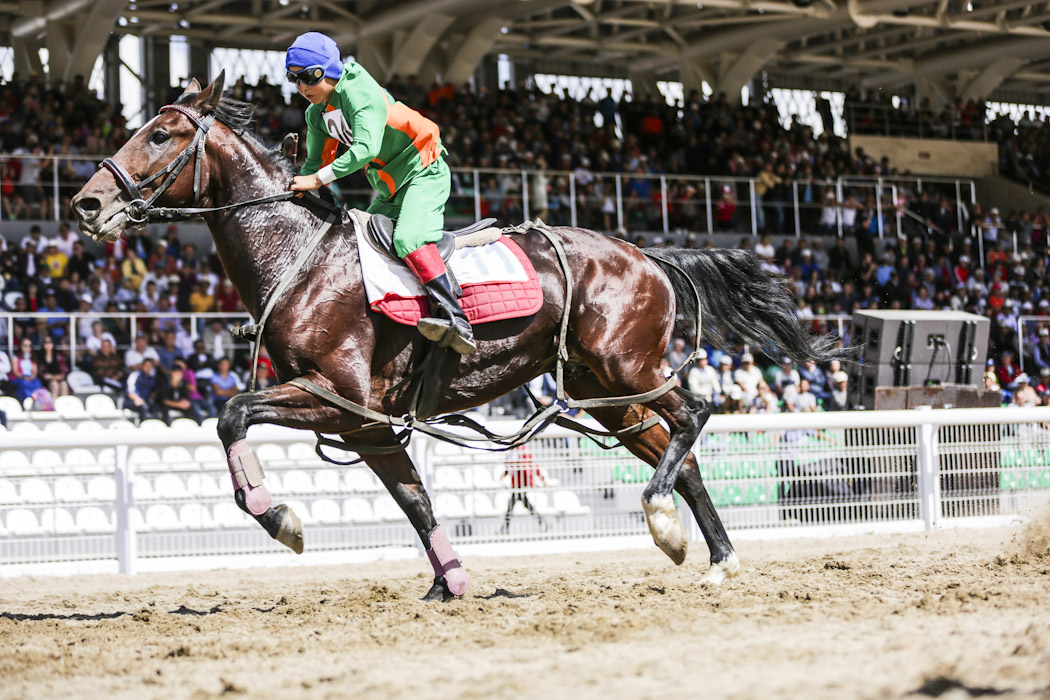 Horse races were another favourite sport that attracted a large number of people to the Hippodrome in  Cholpon-Ata. The youngest jockeys were not more than ten years old.

Salburun – the art of the falconry 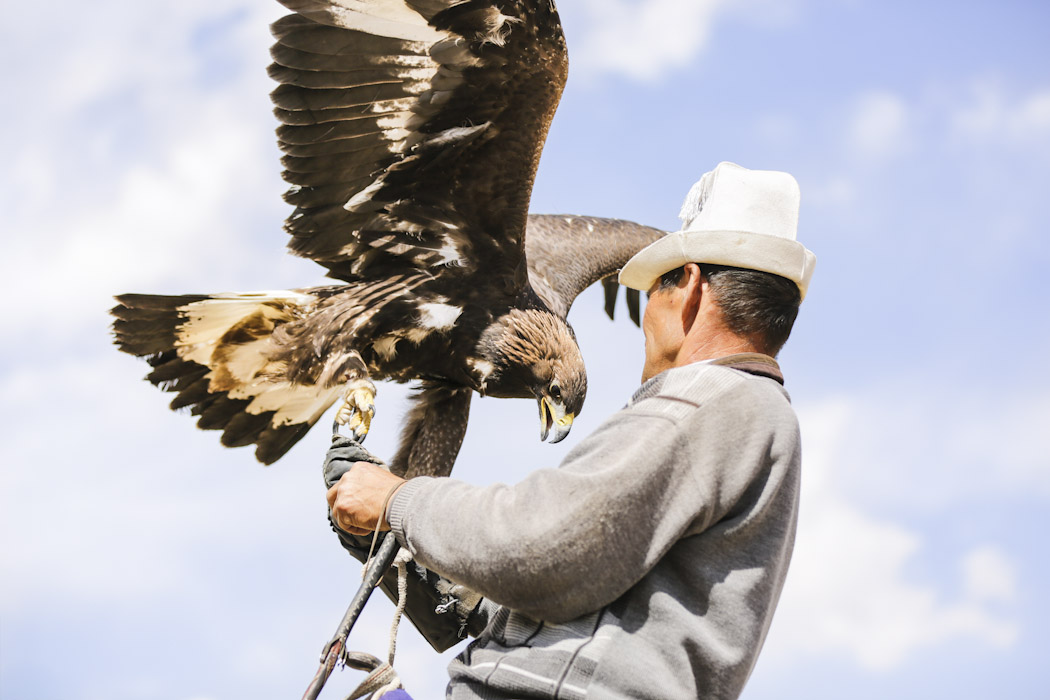 Another highlight is, of course, the art of falconry, also called Salburun, where falconers with their golden eagle simulate the stain hunt by the eagle chasing a stuffed fur, which is pulled by a horse. In this contest, the eagle is placed 200 meters away from his master. At the judge’s signal, the hunter begins to holler at his eagle, holding the bait. The eagle that arrives in the shortest time wins the competition. If during 2 minutes the eagle does not react to the master’s voice, the team is eliminated. Due to its hunting skills, the eagle is handled with a respect that borders the mystic. It is actually considered as part of the family. As for us, we were mesmerised when we got to see closely these birds of prey in action, flying majestically, as light as a feather, despite weighing almost seven kilos and having wingspans easily reaching two metres.

The games ended with Kyrgyzstan conquering a total of 100 medals, followed by Kazakhstan with 69 and Russia reaching the honourable third place with 52 medals.

Concurrently with the above competitions, which took place in the small ethnographic village of Kyrchyn, the WNG underwrote the organisation of the Universe of Nomads Festival, promoting a vast panoply of cultural ethnic events from concerts to fashion and art crafts. With an impressive mountain backdrop, visitors were able to experience up close the traditions and culture of the Kyrgyz people, especially how the nomads lived. In total, more than 700 events were presented there during the week.

The next WNG will take place in Turkey in 2020. A leather bag with glacier water from Kyrgyzstan has been handed over to the next organisers, as a symbol of the games.

The Kyrgyz Republic regrets that the next games will not take place in Kyrgyzstan, as the World Nomad Games have significantly contributed to the growth of tourism in the country and its popularity over the last 6 years. And although the games are no longer held in Kyrgyzstan, the good news for those who want to experience Kyrgyz nomadic life up close is that there are many different and smaller festivals in the villages in the summer, where nomad games such as Kok Boru, Er Enich or Salburun take place.

Written By
Anabela Valente
More from Anabela Valente
Laos is one of the least known countries in Southeast Asia. It is a landlocked country,...
Read More