The Legendary Roads of Luxembourg - a motorcycle trip - diariesof

We have been asked more than once whether it is possible to tour Luxembourg on a motorbike in one day. What people want to know is whether they can tick off all the highlights, while enjoying some of the best winding roads of the Grand Duchy, in one day. It definitely is possible, the same way someone once proved that it is possible to go around the world in 80 days. Technically you can, but why would you do that?

Why eat a bar of chocolate in one minute, if you can extend the pleasure by eating it in small pieces? There are 1,891 kilometres of secondary and regional roads in Luxembourg (we won’t mention the highways or national roads, since motorcyclists tend to run away from them as evil spirits do from garlic). They are better explored slowly, in order to make delicious detours, to find out about the country’s history and to have spontaneous encounters with the locals. Our proposed tour can last more or fewer days, depending on several elements: your free time, your motivation, your interests and your patience (by this we mean, how fast do you eat a bar of chocolate?). 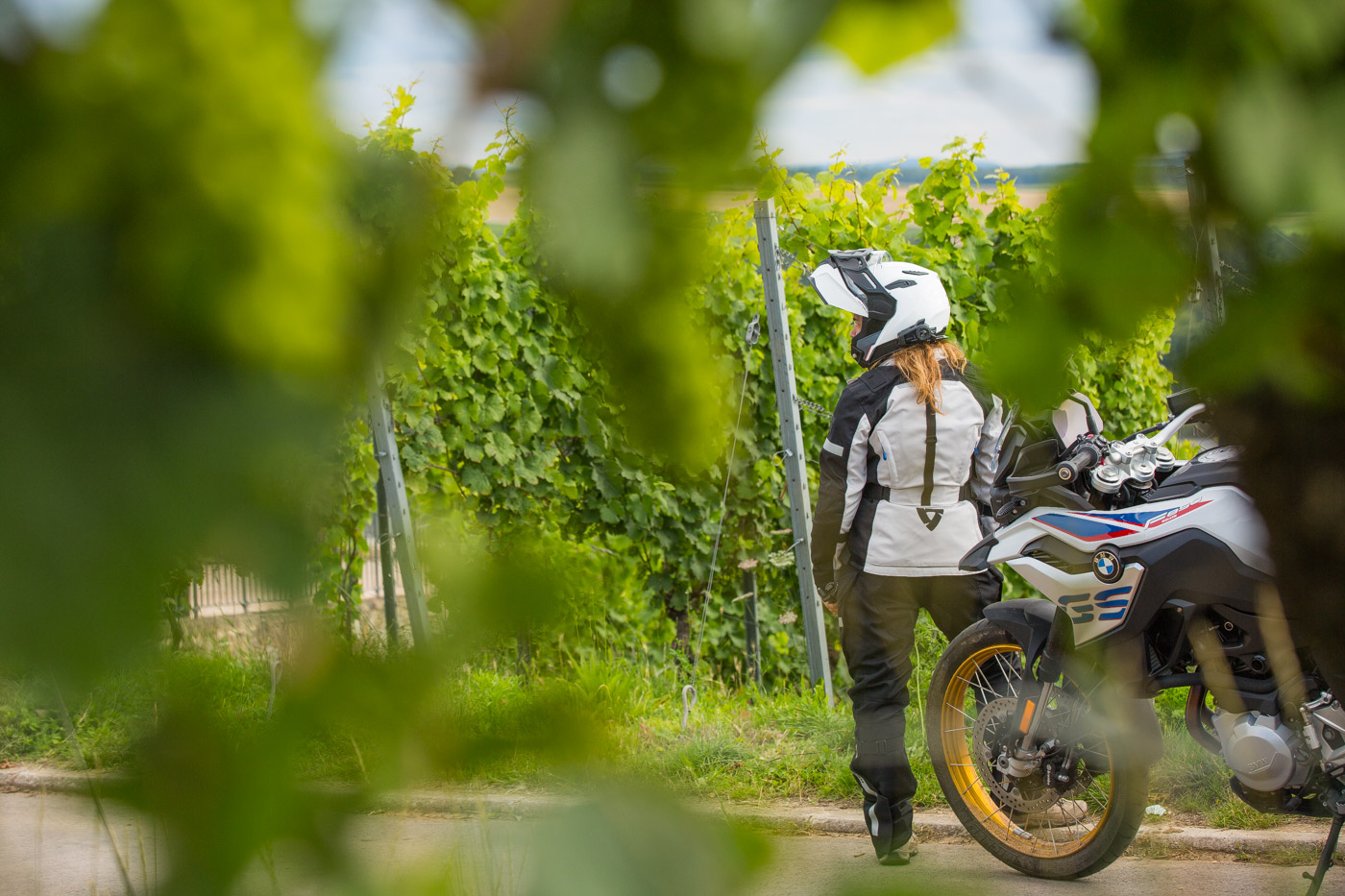 We decided to give this tour a symbolic start at Schengen. You have probably heard of the Schengen area and the Schengen agreement. You will know that it was signed in Luxembourg in this wine-making town, which has the particularity of having borders with Germany and France. What other town could be better located for signing the agreement that abolished European borders and allowed for the free movement of citizens? From here we drove right next to the Moselle River, in what is known as the Moselle region, also called Musel by Luxembourgers. On our right, the shoreline of the river also serves as a natural border with Germany. The road accompanies the river for forty kilometres, and occasionally a few bridges allow one to cross into the neighbouring country. On our left, the land is a long slope with neatly ordered rows of grapes, organised into long terraces of vineyards. Without ever losing sight of the river, the picturesque villages follow one after the other: Remich, then Stadtbredimus, then Grevenmacher until Wasserbillig. 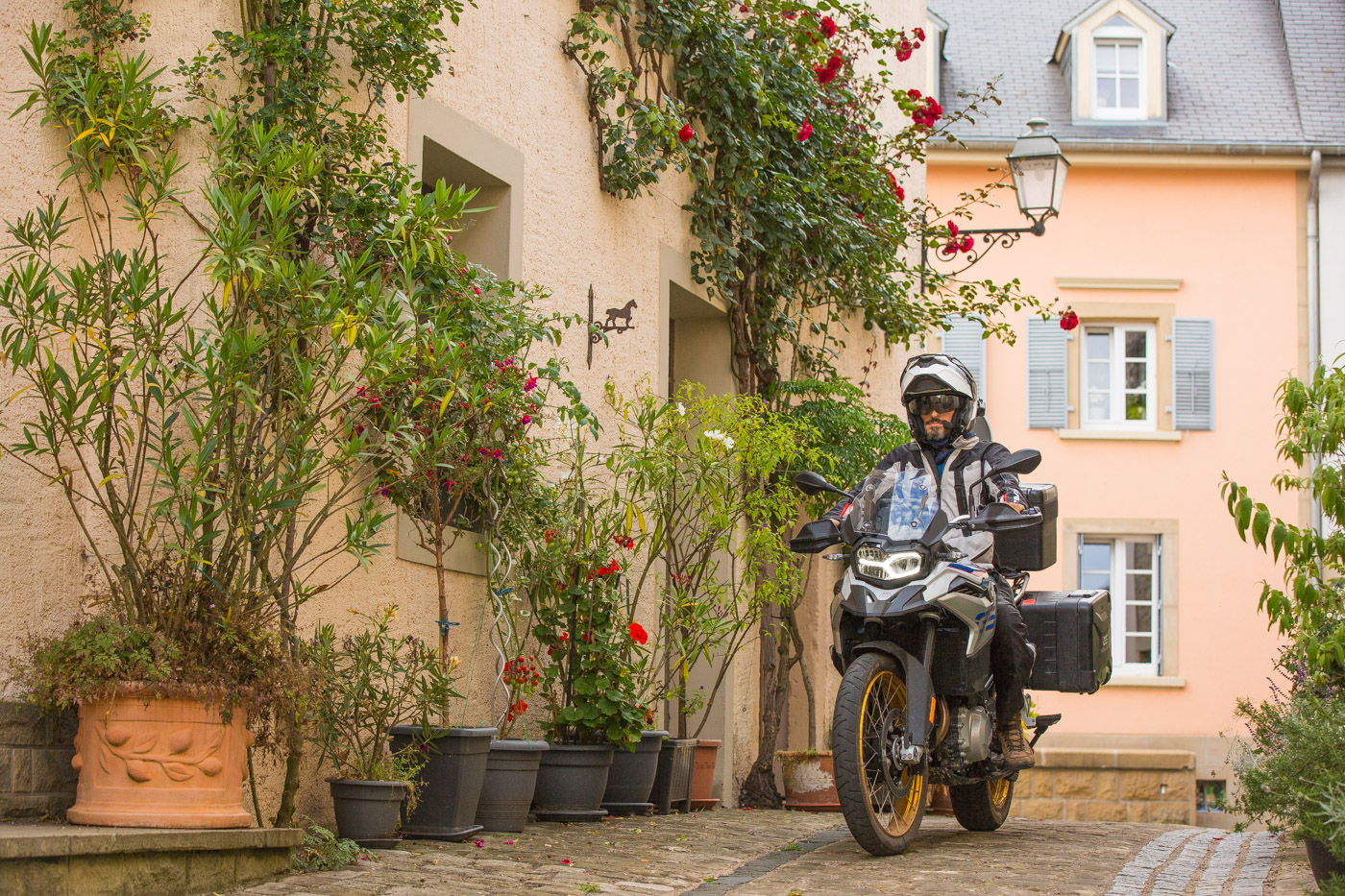 Now, if you are riding a motorcycle and you want to truly explore this region, you will have to take your time, because you will want to indulge in the pleasures offered by the many winegrowers – wine and crémant tastings will be on the agenda at the end of your day’s riding.

For some lovely views over the vineyards, do not hesitate to include a small detour to the N16, which runs from Mondorf to Remich, particularly around the town of Bech-Kleinmacher. Once you arrive down by the river again, you enter one or another village, each with its countryside ambiance. Ahn and Ehnen were two of our favourites. These hamlets are small but have a lot of charm. We loved wandering in the tiny cobbled alleyways of Ehnen, where locals seem to have a green thumb for decorating their door steps with plants and flowers. 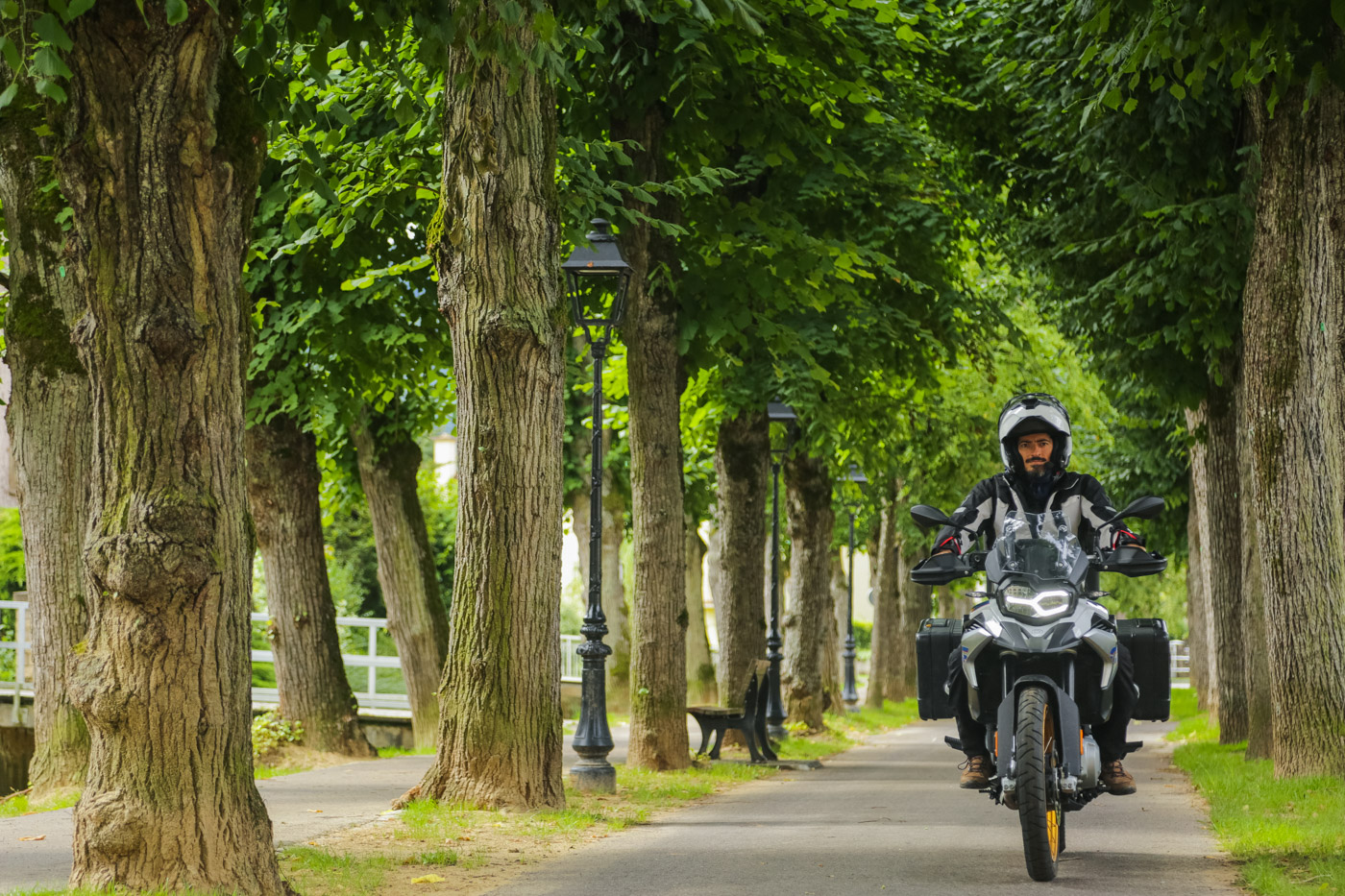 After all these wine tastings and striking views, you should break away from the river and proceed to the interior of the country. Continue on towards Echternach, the oldest city in Luxembourg and a good base from which to discover the Mullerthal.

Read about what to visit in the Mullerthal Region of Luxembourg 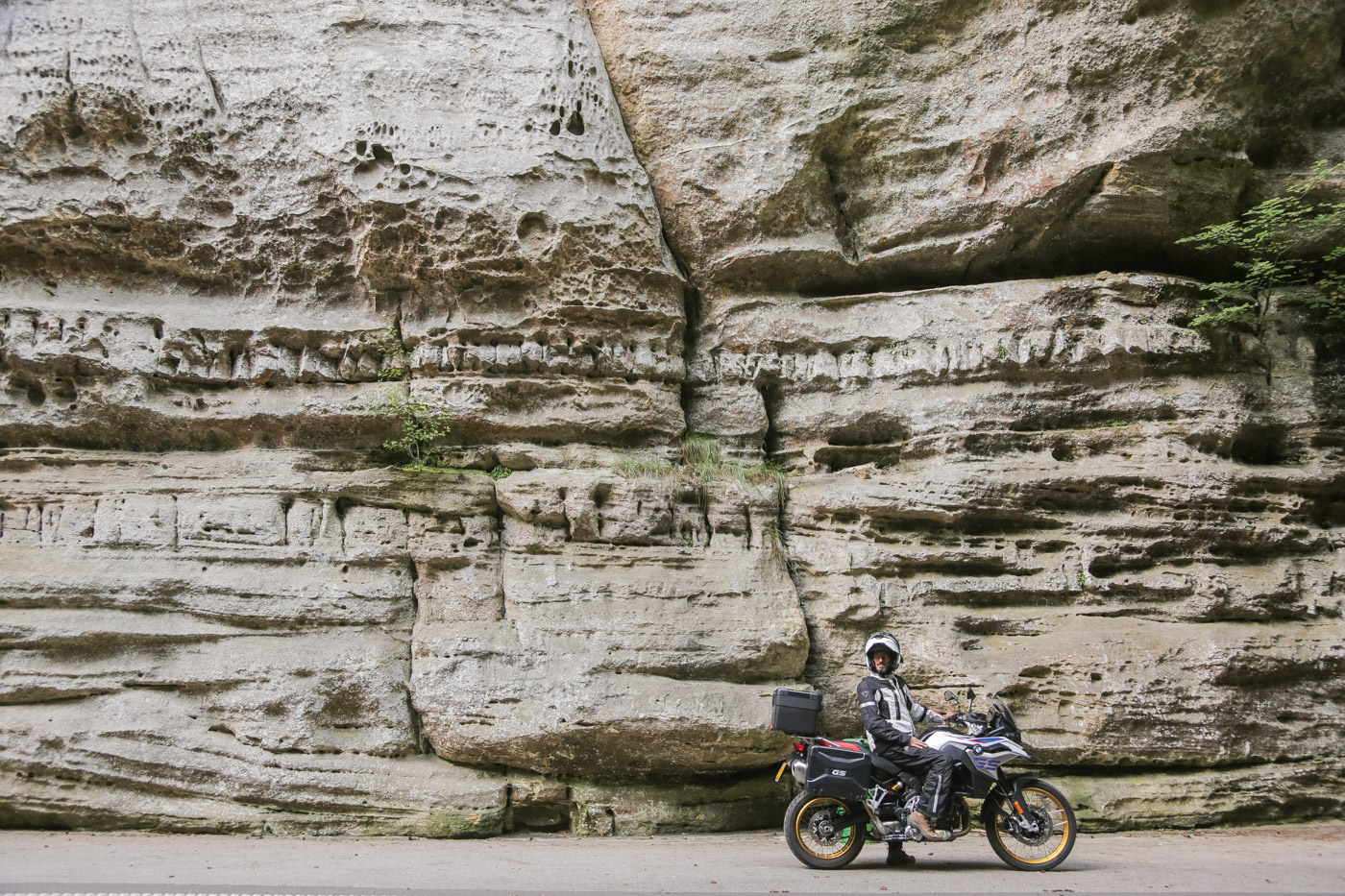 The Mullerthal is really better explored on foot, but taking the road from Echternach to Berdorf already gives one a foretaste of the stunning rock formations in the area. We stopped to observe the Perekop, a massive vertical wall, that is very accessible and which is situated practically on the road. It’s a giant rock formation with a fissure in it, where stairs have been carved and which lead to a higher level in the forest.

Read more about the Castles of Luxembourg

The castles of Beaufort and Larochette belong to this area and are worth a stop for a break or to spend the night. Our favourite castles, though, would be on the plan for the following days, as we started to head north and entered a new region: the Éislek. 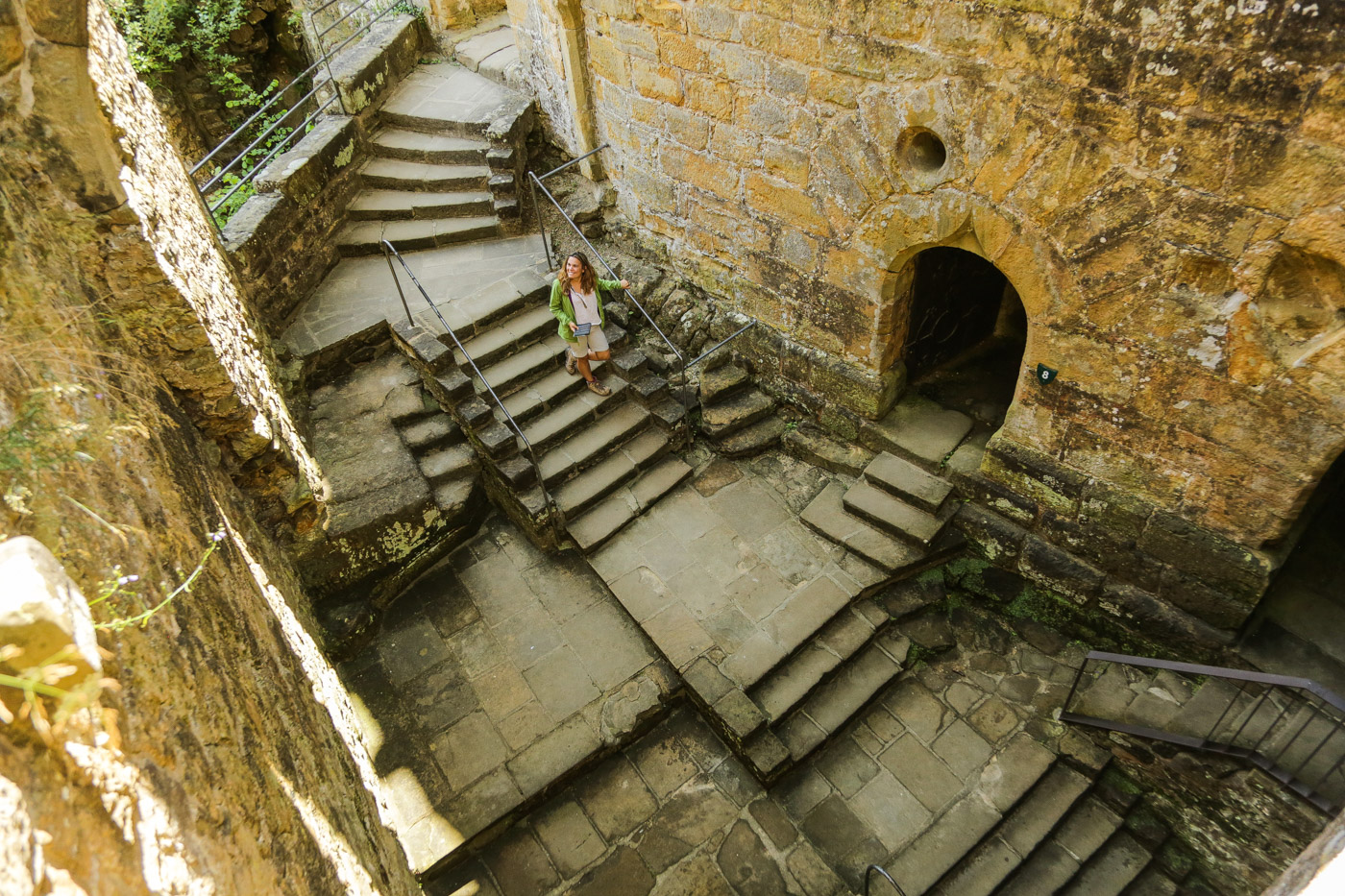 Motorcyclists from all over love this region and there are good reasons for that. Hairpin turns follow the rolling hills, and you see yourself riding through a forest, alongside a lake, and following a winding river, until – out of the blue – you stumble upon yet another château. 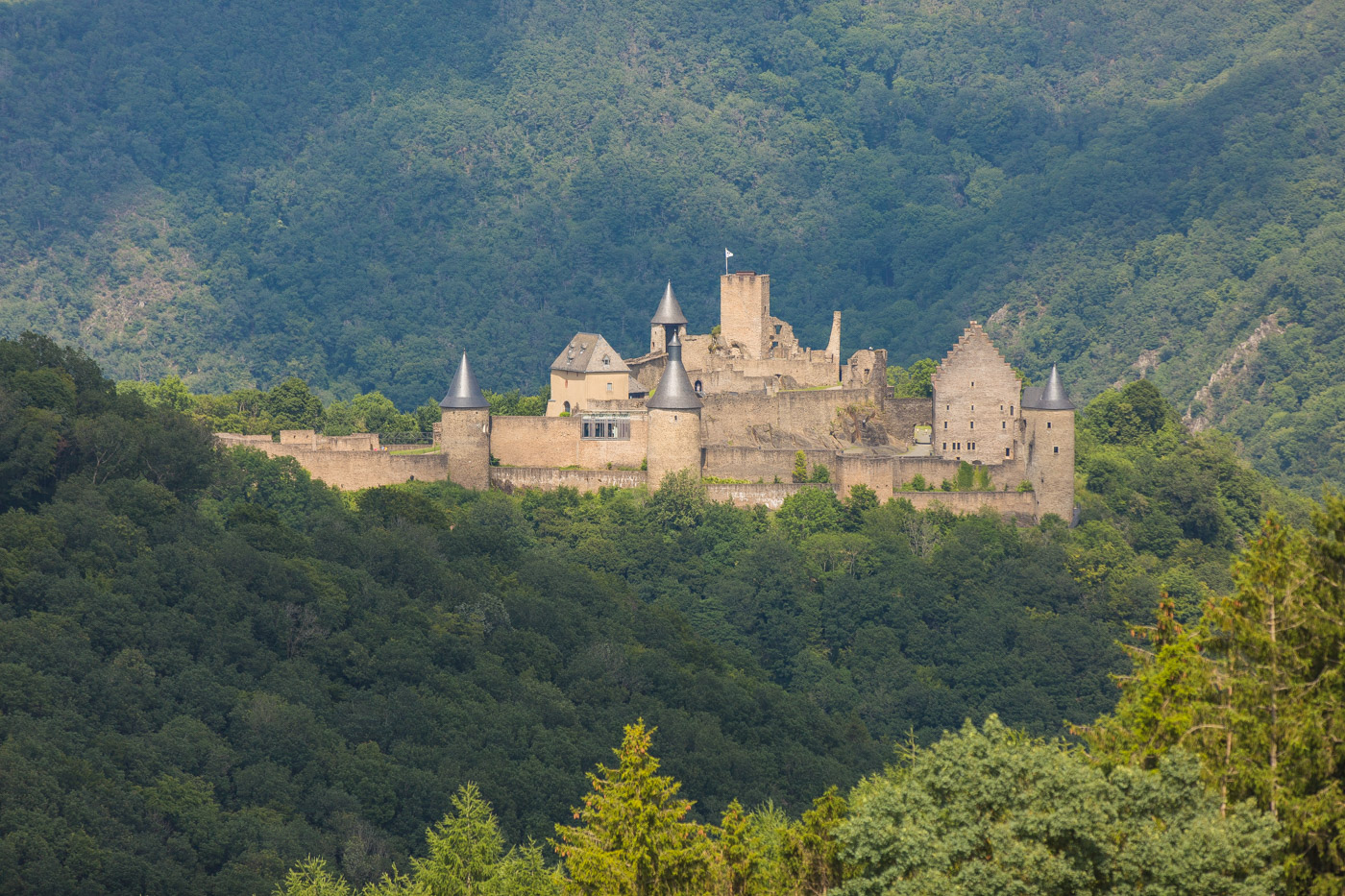 The views over the scenic highlands, where the medieval castle of Bourscheid is located, are amazing, regardless from which outlook one contemplates it. This is the largest castle in the Grand Duchy (also the largest between the Rhine and the Meuse, which attests for its importance in the neighbourhood). Its last extension occurred in the 15th century with the construction of its many towers. We camped at the foot of the castle, at one of the camping sites near the Sûre, where the river makes a lovely horse-shoe, and woke up in the early morning to find mist still enveloping the castle. We warmed up by cooking and eating a simple morning porridge. With the castle in view, and feeling our cold red noses and hands, it was impossible not to imagine that we could easily be in the Scottish Highlands. 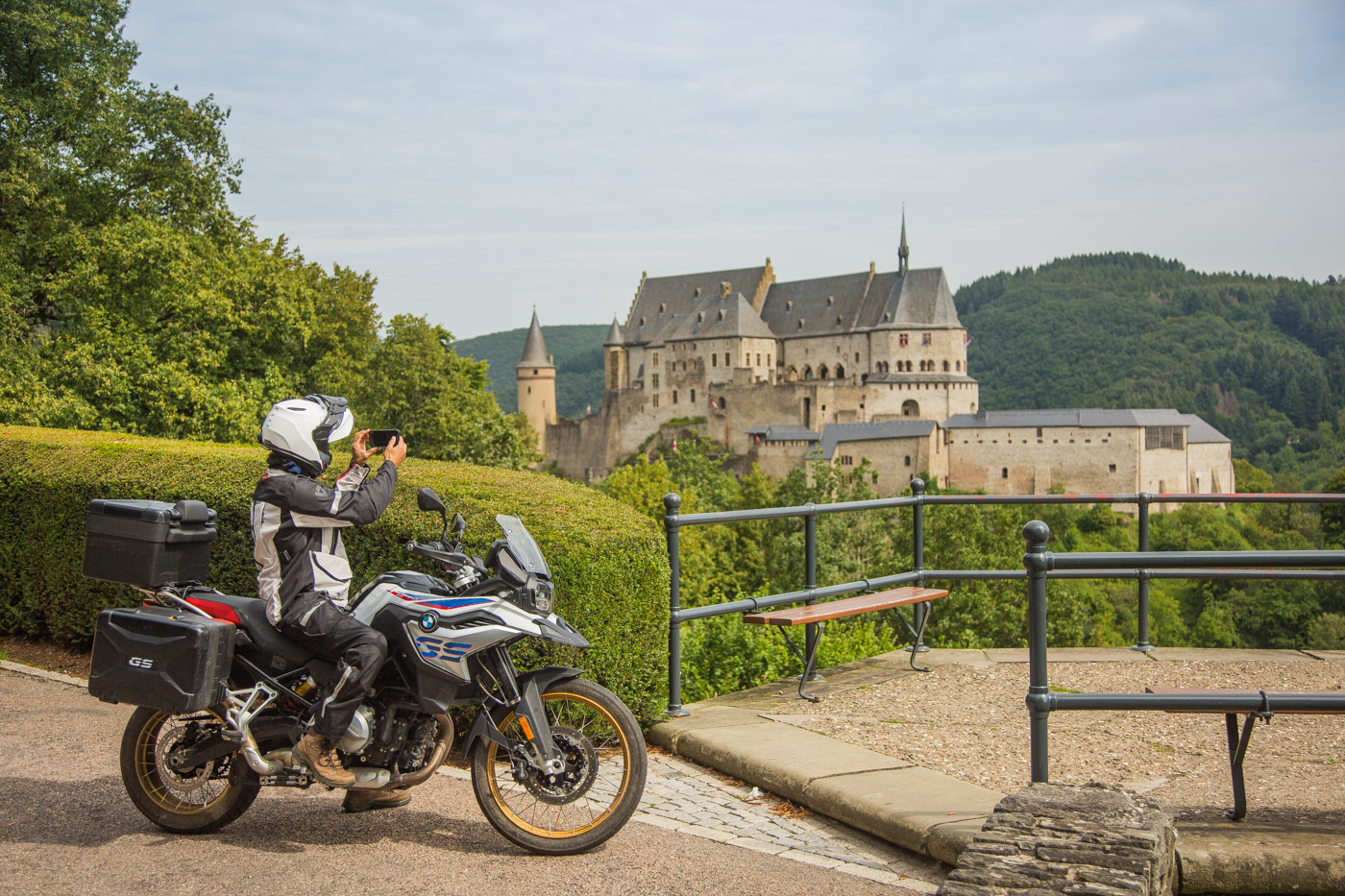 From there, the CR320 road wound us upwards, all the way to the castle of Vianden, listed by several sources as one of the most beautiful castles in the world. For a better feeling of what life in the castle must have been like in the chivalric times of the Middle Ages, try to visit the castle during the medieval festival in summer, and be amazed by tournaments, medieval fire shows and the much-loved medieval market and concerts. If you pass by later in the year, in mid-October, you can attend the walnut market, a traditional event that happens after the walnut harvest. Here you will find a range of goods produced locally with walnuts, such as liqueur, bread or even pâté. Since its beginnings in 1935, when the first markets sold nuts exclusively, the market has become a real folk festival, with a lot of music and other attractions. 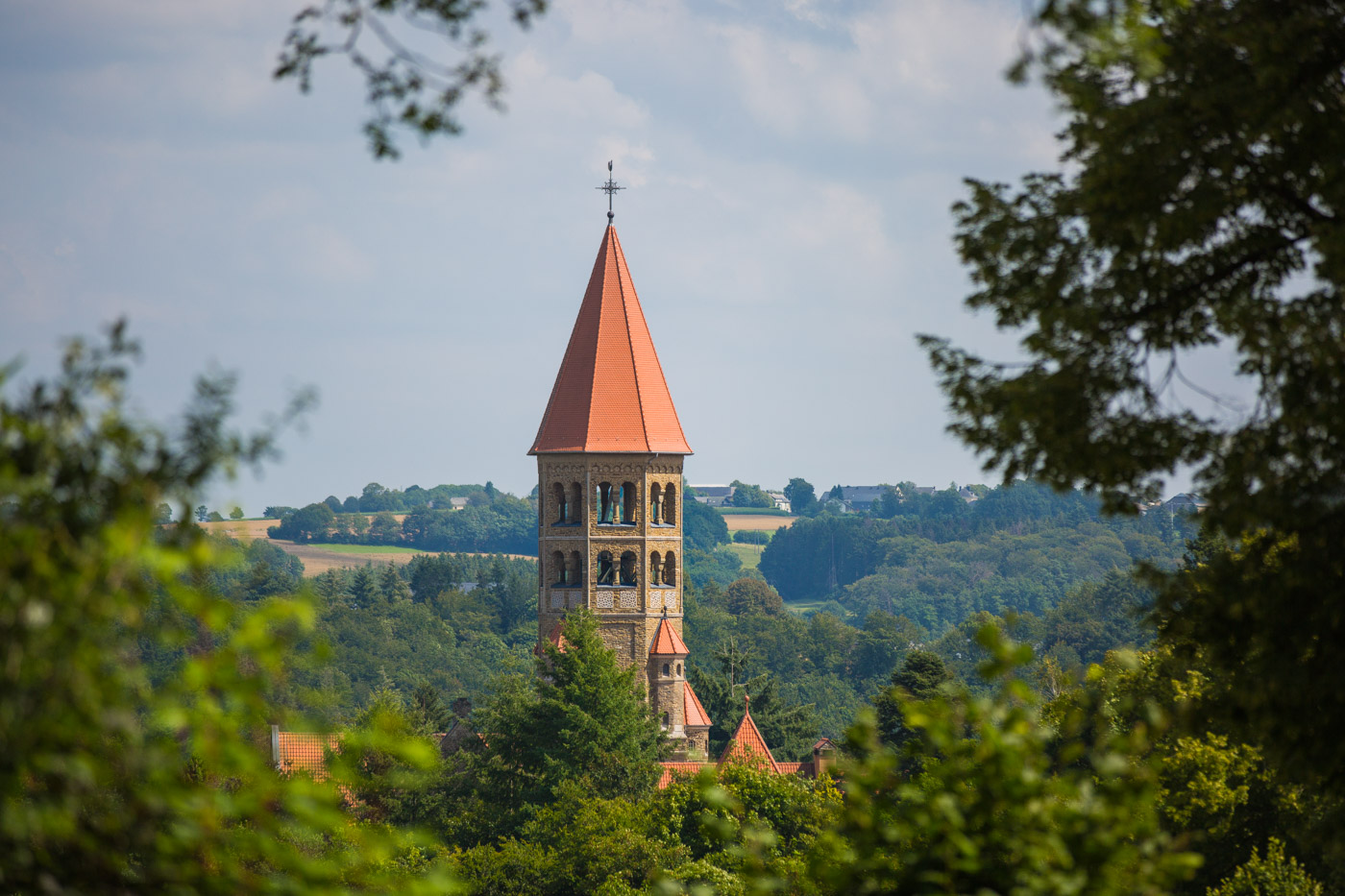 Continuing north, we came across the village of Clervaux, the last castle in this region. It has the particularity of holding one of the Luxembourg’s UNESCO heritage collections; a photographic exhibition that was brilliantly put together by Edward Steichen, the world-renowned Luxembourgish-American photographer. This exhibition is worth the stop, as it is considered one of the best photographic exhibitions about humankind. We spent so many hours there that we eventually decided to sleep in Clervaux. The next morning, as it was Sunday, we went to mass at the Benedictine Abbey of Saint Mauritius. We had heard a lot about the magnificent Gregorian chants of the old monks and they lived up to their fame; we were wonderfully regaled by their tuneful singing. 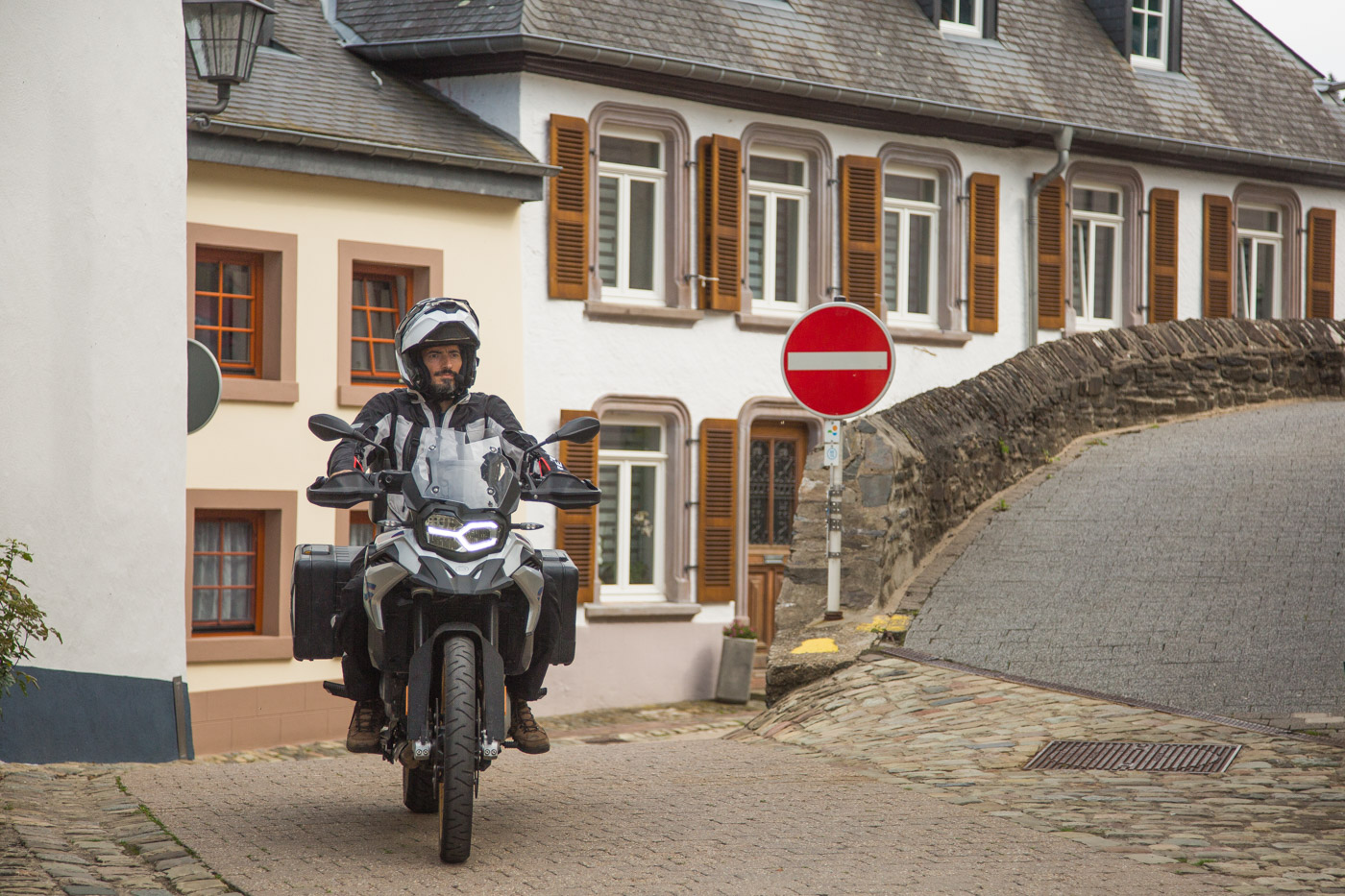 Finally, we started our descent of the country and went straight to the Lake Sûre. This time we didn’t do any activities at the lake, other than enjoying its views and stopping for a refreshing drink at Esch-sur-Sûre. For those interested in water activities, such as sailing or kayaking however, the lake offers many rentals and it is possible to spend some relaxing days on its shores. 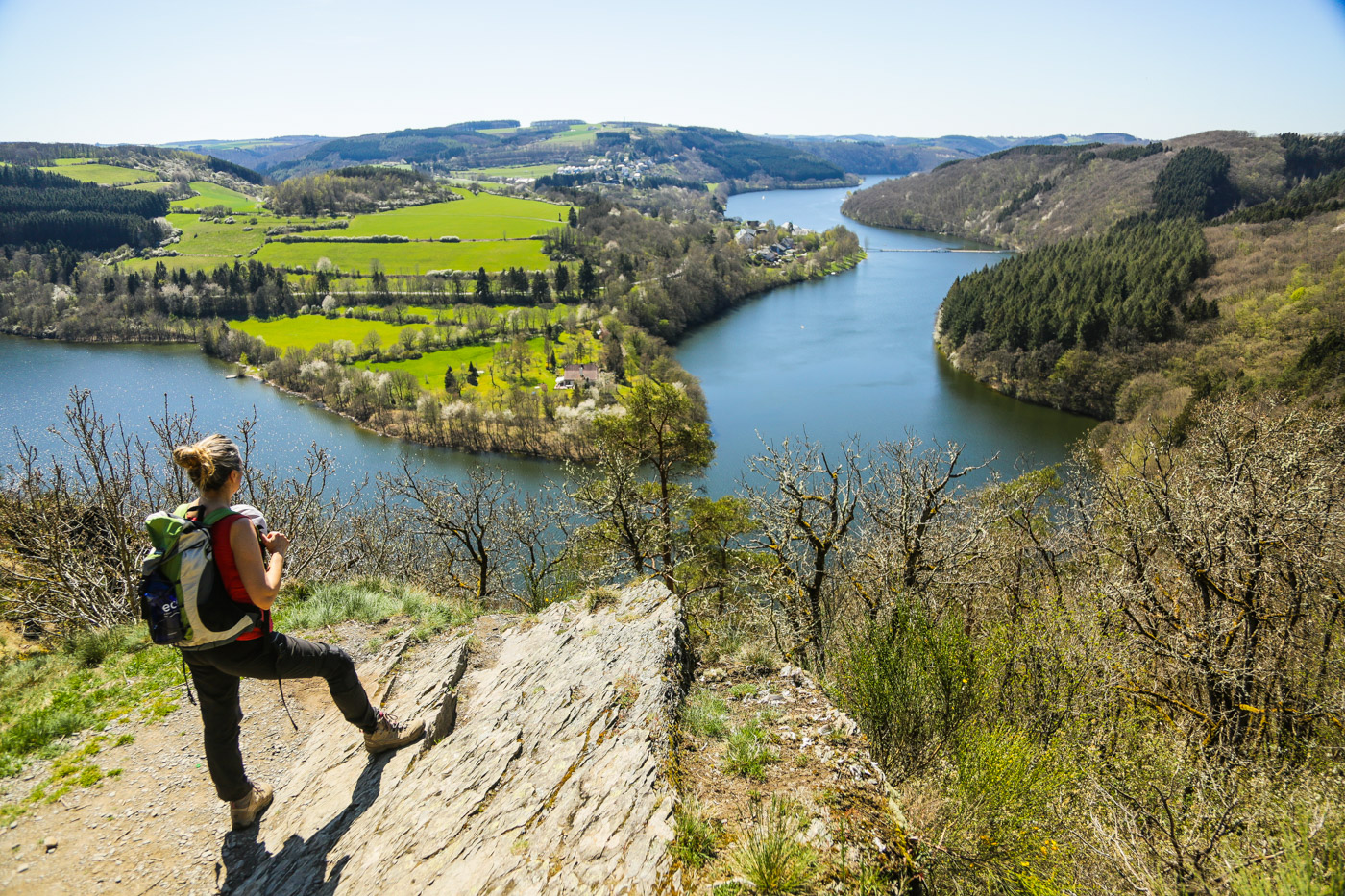 The Guttland region is most famous for the Vallée des 7 chateaux (The Valley of the Seven Castles). We meandered along the valley, zigzagging from castle to castle, and finding it an absolute pleasure to discover them by motorbike. Some of the castles are privately owned and it is not really possible to visit them inside, but it is nice to have a glimpse of them from the outside or even to visit their gardens. One such castle with blooming gardens is the castle of Ansembourg, with its beautiful collection of roses, and which is open to the public. Here we learnt that, in the early twentieth century, Luxembourg used to be one of the main exporters of roses, having the world’s most prestigious clientele, such as the Tsar of Saint Petersburg! Get one of the volunteer gardeners to introduce you to the many rose varieties, bearing the names of the Grand-Ducal family and many other royals, state presidents and celebrities. 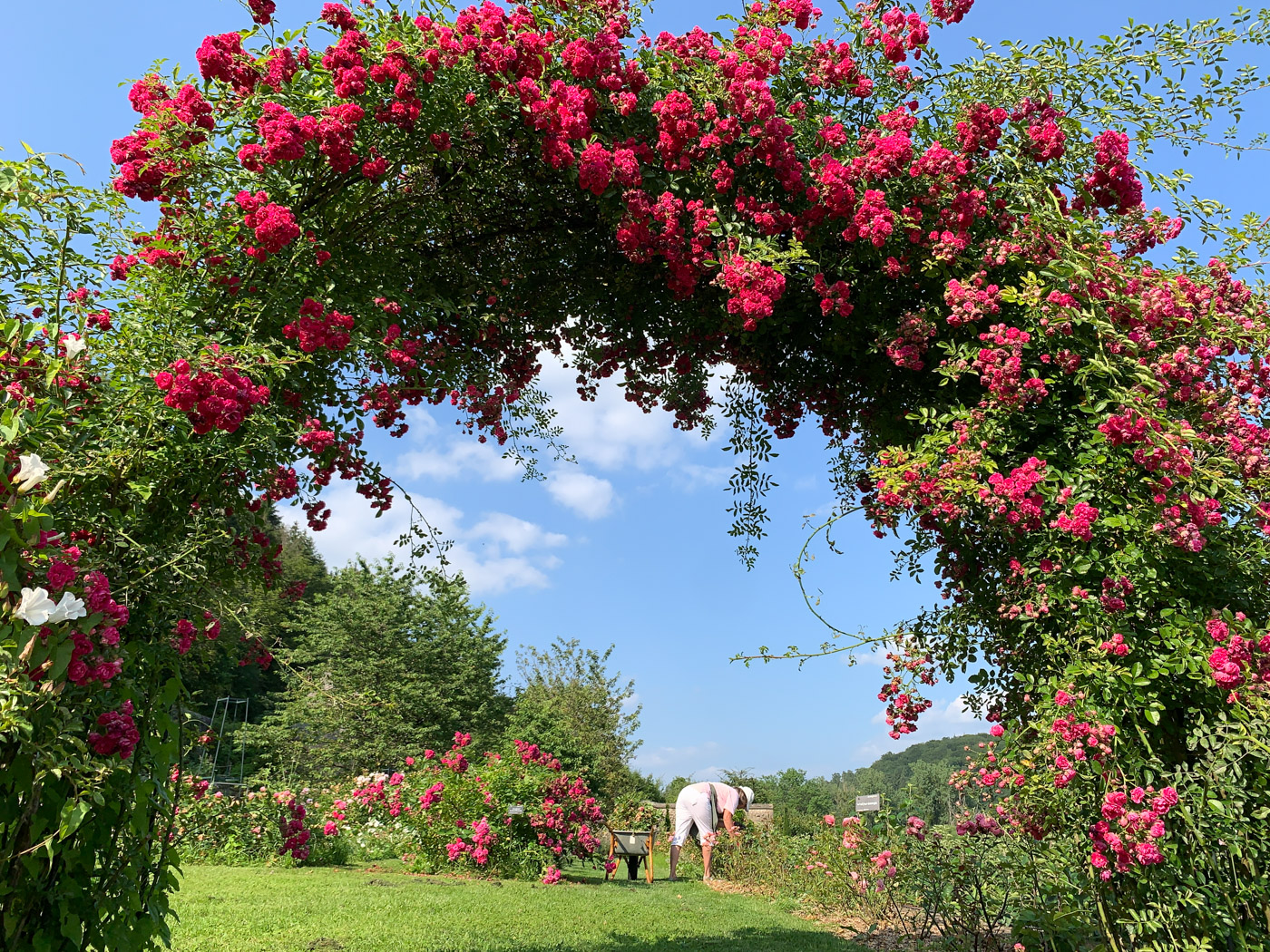 From there, we were just fifteen minutes away from the castle of Useldange, where we were introduced to the story of Catherine Theis, who was accused of witchcraft, in 1624, and killed in prison while awaiting her trial. Witchcraft and inquisition apart, the castle also offers a cultural itinerary for the partially sighted, which was created under the patronage of UNESCO, and where most experiences are to be smelt, heard or touched. The trail starts around the castle, with an audio and visual tour that introduces the local fauna. It then leads us through a lovely aromatic garden with a great variety of local herbs and plants. Inside the tower, the trail continues with a well-made exhibition that presents the local culture through the centuries. Everyone can feel, hear and touch history in Useldange. If you are lucky – or organized enough to book beforehand – you may even spend the night in one of the gorgeous mushroom-shaped eco-huts, just opposite the castle. 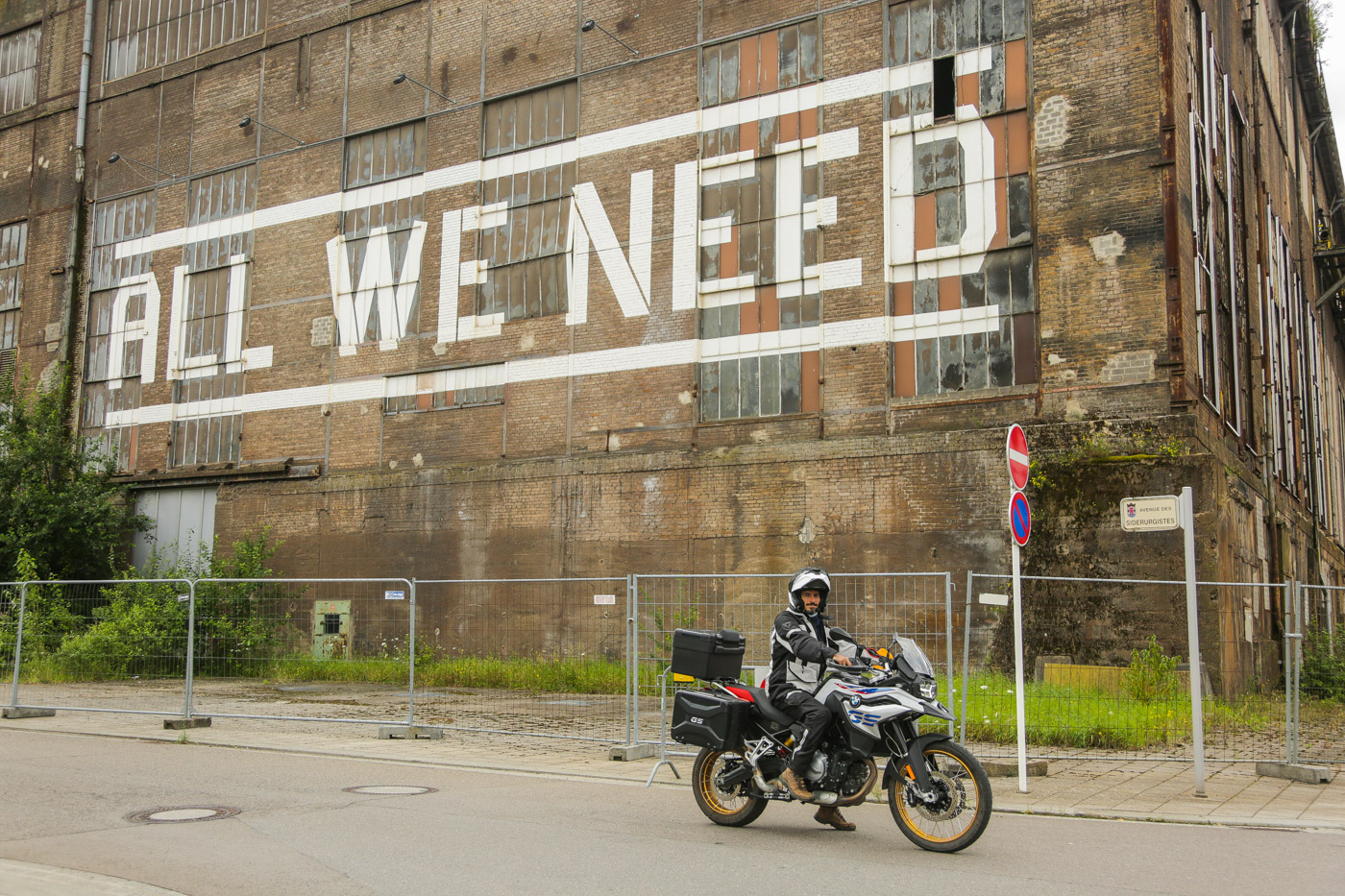 We continued further south, where we spent a good couple of days in the last region – the Minett – before making it to Luxembourg City. The reason we stayed so long in the south was its lively atmosphere and cultural scene. If you can, don’t miss a concert at the Kulturfabrik in Esch-Alzette or at the Rockhall in Belval, where the old furnaces from the mine industry offer an uncommon backdrop. For more industrial tourism, head to Fond-de-Gras, a real open-air museum and the stage of several cultural manifestations in summer. The coolest way to reach Fond-de-Gras is by taking the historic steam train from Pétange – the Train 1900 – an experience in itself. 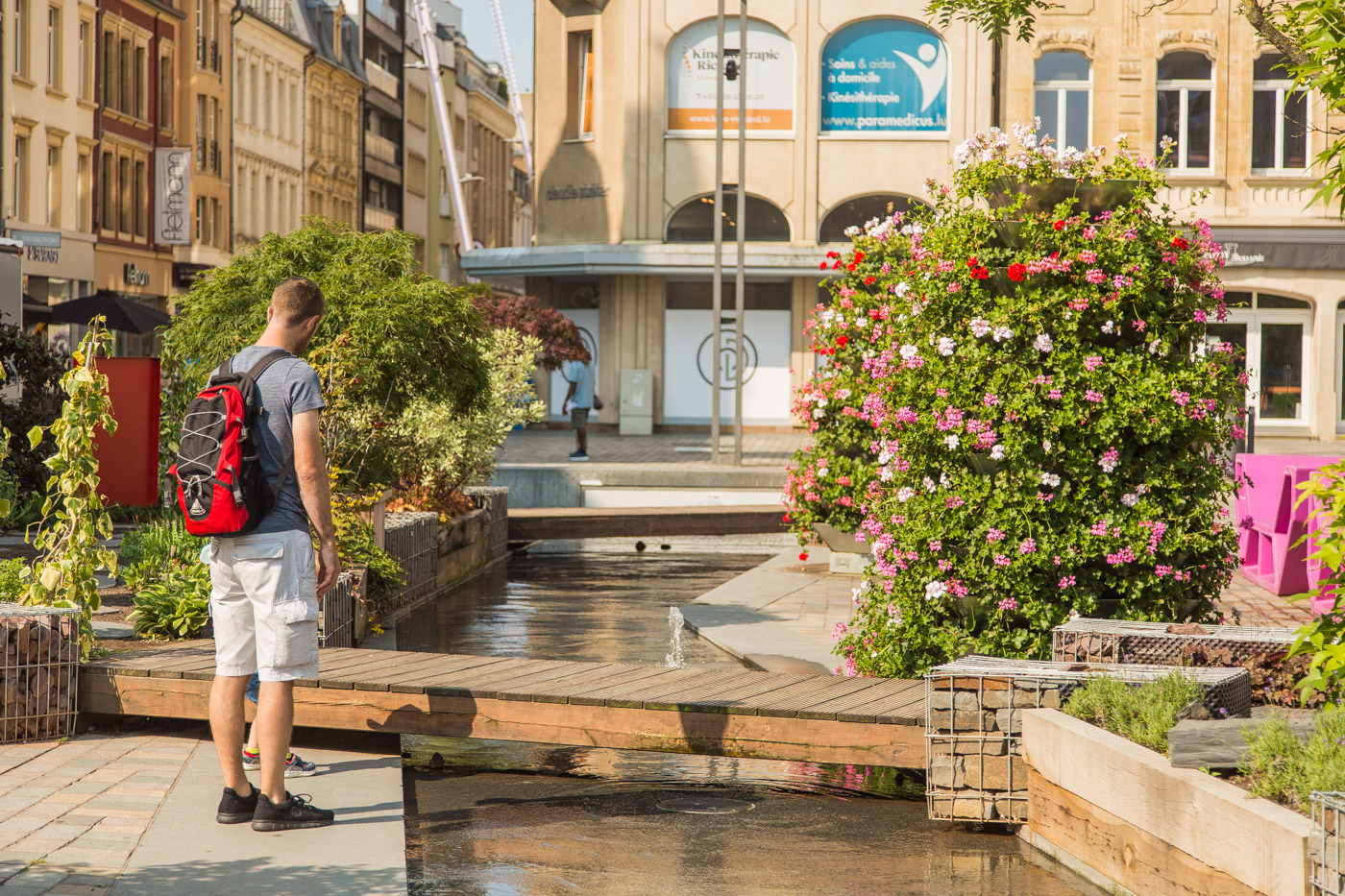 Suddenly fifteen days had passed by and we still hadn’t done any of the hikes that we had planned on doing; we still hadn’t ridden our bicycles, and we still hadn’t gone down the river in a kayak. So, to go back to that initial question at the start of this article, yes, you can tour Luxembourg with your motorbike in one day; you can also do it in one weekend. But, damn, you will be depriving yourself of so much fun!

What to visit in the city of Luxembourg

Or try our Quiz:

How much do you know about Luxembourg